The Silver Palate Good Times Cookbook: A Case for No Photographs

We’ve been told not to judge a book by its cover, but what about its photography, layout, typefaces, paper—and how they all interact with each other? Each week, we’ll be sharing a book spread that’s worth taking a close look at for one reason or another. And we’ll ask you: What do you think about it?

Today: When to pass on photographs. 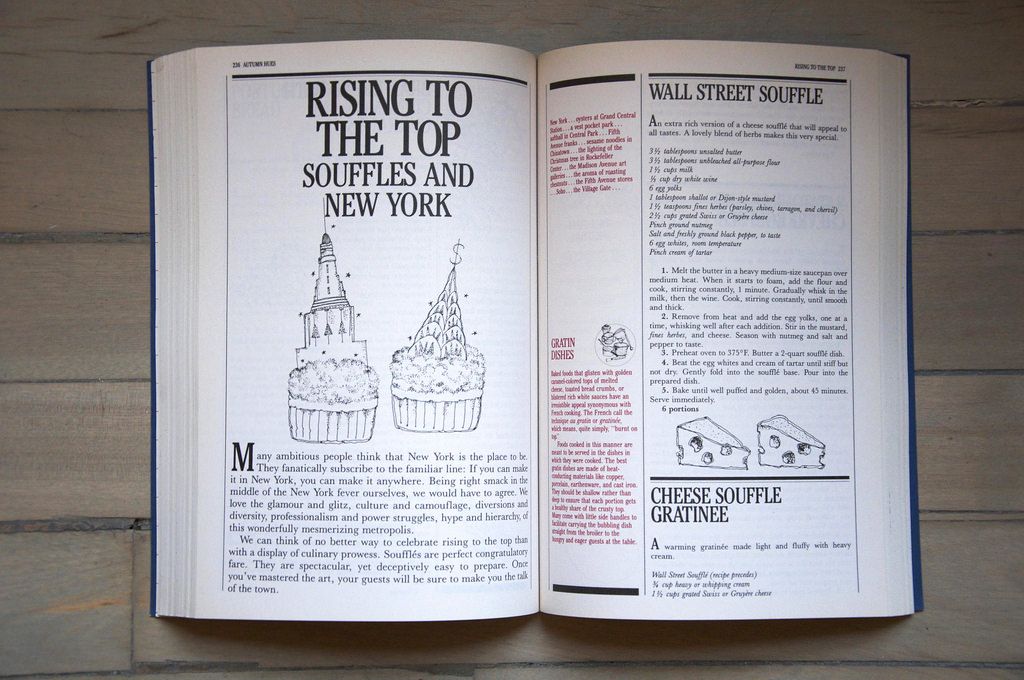 The original Silver Palate Cookbook was published in 1982. It had 350 recipes, along with sketches, and the only color to be found was the occasional red text or illustrations. It did not have photographs. It went on to sell 250,000 copies in the first year (a record at the time) and has eclipsed 2.5 million copies in its more than 25-year life. It is a required cookbook to many and is responsible for introducing new ingredients and comforting many with homey recipes that stand the test of time.

To celebrate the book’s 25th anniversary, a “deluxe edition” of the book came out in 2007—and this time around, there are photographs. The quaint sketches of latticed pie and farm animals are now paired with styled shots of sliced cranberry loaves and a tower of mini quiches. It is not the Silver Palate most of us remember. And, for me, it’s lost its charm. The feel of a book changes when full-color, styled photographs sit next to spontaenous-seeming, sometimes-random doodles. It's like a personal diary got made into a book to be marketed and sold, but it can't fully commit to its new life in public.

The good news (for many reasons) is Sheila Lukins and Julee Rosso went on to publish other books, the next one being The Silver Palate Good Times Cookbook, which you see above. It has passed its 25-year anniversary without the addition of photography—luckily. It’s full of great recipes, short headnotes, and useful nuggets of cooking wisdom that remind us that simplicity is oftentimes better—something that seems a little less clear in the now photo-heavy Silver Palate Cookbook. And that is reason enough to spend a few moments with a couple whimsical drawings and text-heavy pages.

Do you own one of the Silver Palate cookbooks? What do you love about them?

Thanks to Kitchen Arts & Letters for letting us borrow this book.

jamcook May 14, 2015
If the recipe is written well and clearly, you can be happily surprised by the results. Your finished product will rarely look like a professionally styled photo.

marsiamarsia May 14, 2015
Call me crazy, but I won't buy a cookbook anymore unless it has tons of inspiring color photos, preferably a photo for every recipe. Why? I want to know what the dish is supposed to look like! That being said, I still have old cookbooks of my mother's and grandmother's, with few or no illustrations, such as Helen Corbitt's Cookbook © 1957.

jamcook May 12, 2015
Mrs Larkin.. Judging from your own recipes , you would love Chicken Marbella. I still cook a lot from all three books. Also like the chicken with apricots and currants, the corn chowder, and the delicious Rice salad that feeds the multitudes. None of my old favorite cookbooks by James Beard, Maida Heatter, Craig Claiborne or Julia child had photos. sometimes the photos seem over styled and over done , while beautifully written, clear recipes endure on their own.

Dana V. May 8, 2015
When I interviewed Deborah Madison about her recent update of Vegetarian Cooking for Everyone, she mentioned she was adamant about removing the photos for the new addition. She felt the photos really dated the book and I agree, although like almost everyone here, I still like photo heavy cookbooks. The Silver Palate was my first cookbook and it changed my life. I will treasure it forever.

amysarah May 8, 2015
Pretty sure Silver Palate was the first cookbook I actually purchased (tho I already had several "borrowed" from my mother.) It's so well used that it's now literally in pieces. I don't use it often anymore, but those recipes imprinted me as a cook - still prototypical for many things I make. I also have Good Times, and New Basics - which I love too. I'm not necessarily opposed to photos in cookbooks - but SO much of SP's essential character is in those distinctive illustrations. Adding photos seems like a clunky intrusion on its identity. Another SP memory, while I'm on the subject - one of my first jobs was on W. 97th, 20 blocks north of the Columbus Ave. shop. Once a week or so, a friend and I would walk down there (in the sneakers we changed out of when we got to work...dating myself much?) to pick up lunch. I remember lemon poppy muffins, curry chicken salad, pesto pasta salad - at that time, all truly novel! That 40 block RT must have walked it off. (Tho that doesn't explain the $4 neighborhood Chinas y Latinas feasts we regularly consumed at lunch other days. Ah, youth....) But yes, SP was indeed formative and zeitgeist-ish in many ways.

ChefJune May 8, 2015
I'm not a big fan of Chicken Marbella, but the Green Peppercorn Pate is divine, and the big sandwich at the back of the Good Times book is SO fabulous! We sold a bejillion of them during football season when I was catering.

mrslarkin May 8, 2015
I have both books (without the photos). The illustrations are perfection. The books are loaded with great ideas. I've tried many of the recipes - they are very good. Their black bean soup ZOMG. Haven't gotten around to the Chicken Marbella yet. What is wrong with me.

ChefJune May 8, 2015
OMyGoodness, do I love that original Silver Palate cookbook! And I remember well my pilgrimage from Chicago (where I lived at the time) to New York so I could visit their shop on Amsterdam (I think it was...)
I still love the book and use a few of the recipes, even tho I don't cater any more, and don't entertain in the same way. Besides, I use my own cookbook. But The Silver Palate will always have a place in my culinary library. [Disclaimer: I have never felt the need for photos in cookbooks.]