How We (and Dan Barber) Cook with Trash

Today: Last week, we asked Dan Barber, the chef and co-owner of Blue Hill in Manhattan, to transform our test kitchen scraps into a gourmet meal. This week, we challenged ourselves to do the same thing. 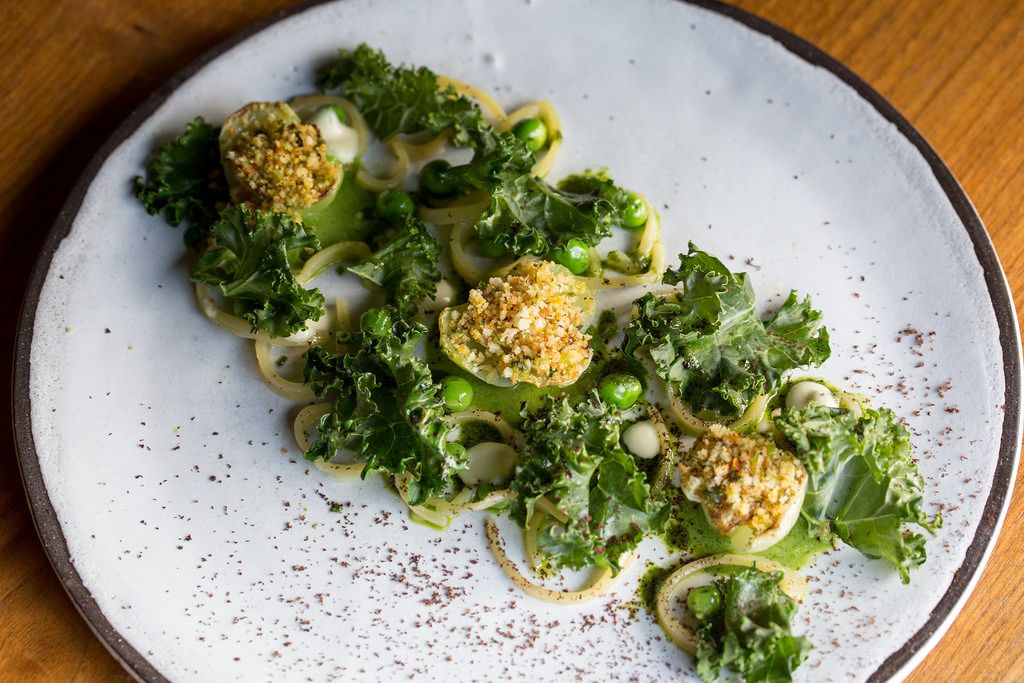 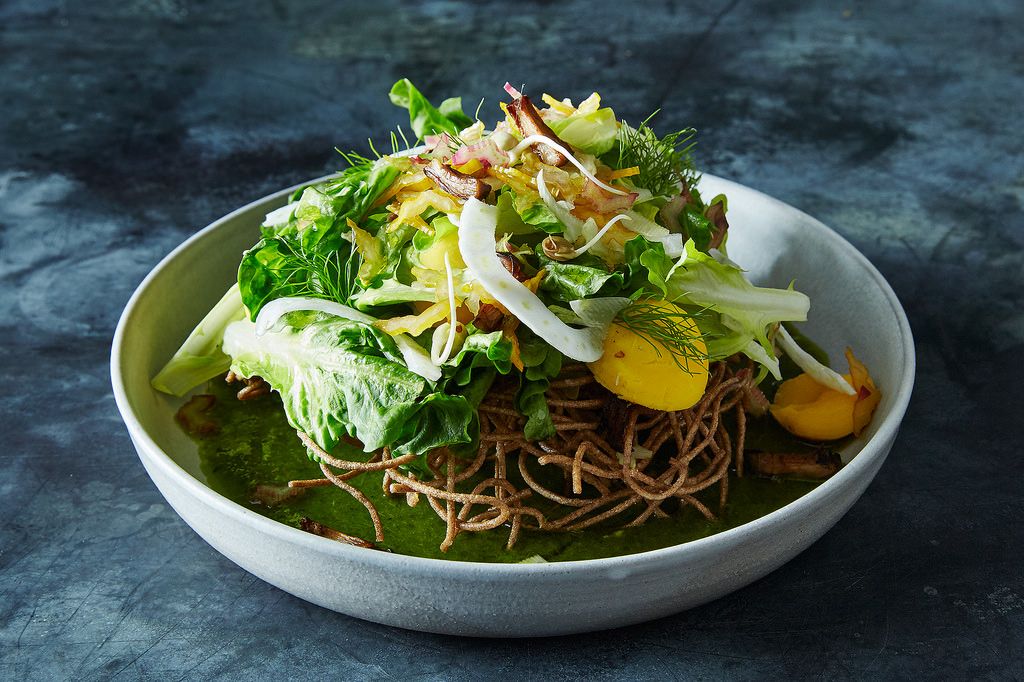 This past March, Dan Barber served a burger patty made out of the discarded fruit pulp from New York City's popular juice bar, Liquiteria. The pulp, out of byproducts from drinks like "Berry Powerful" and "Mean Green," had been dyed with beet juice so that it better resembled a meat patty. The bun was composed of stale, leftover bread from the bakery at Balthazar, which was then rehydrated with water, mashed, and baked into a "fresh" bun. This unconventional burger was part of Dan's pop-up restaurant, wastED, which temporarily replaced his permanent restaurant Blue Hill in Greenwich Village, Mahattan. The three-week event called attention to the astounding amount of edible food that gets thrown away in the United States every year—133 billion pounds, to be exact. 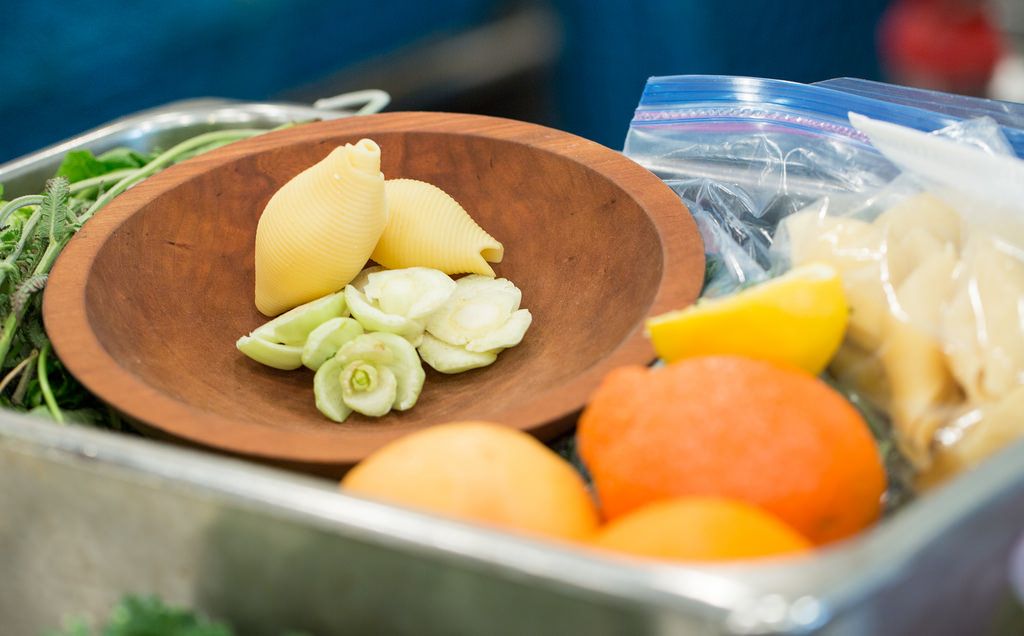 The bin of food scraps we sent to Dan Barber including half-cooked pasta, over-ripe citrus, bruised lettuce, and vegetable stems.

Last week, we asked Dan to take a look at one day's worth of Food52's test kitchen's scraps. After seeing his plated meal (masterpiece?), made from little more than a few vegetable odds and ends, we decided to take the "wastED challenge" ourselves and turn the scraps from yesterday's photo shoot into a dish. How hard could it be? (Right?)

More: Want to start your own wastED challenged? Here are 5 ways to use your vegetable scraps for good.

While we have an intra-office system to make sure all of the food we photograph gets eaten or sent home with team members, we found ourselves with an abundance of leftovers and unused vegetable ends after two particularly packed photo shoots. Here's what Dan had to work with: bruised bok choy ends and scallion stems from a fried rice dish, radish greens from a Spring Vegetable Jumble, mushy peas, flat-leaf parsley stems, and rigid kale stems from Soba with Parsley-Pea Pesto and Kale, half-cooked shells and onions from a stuffed-pasta dish, and some shriveled citrus. 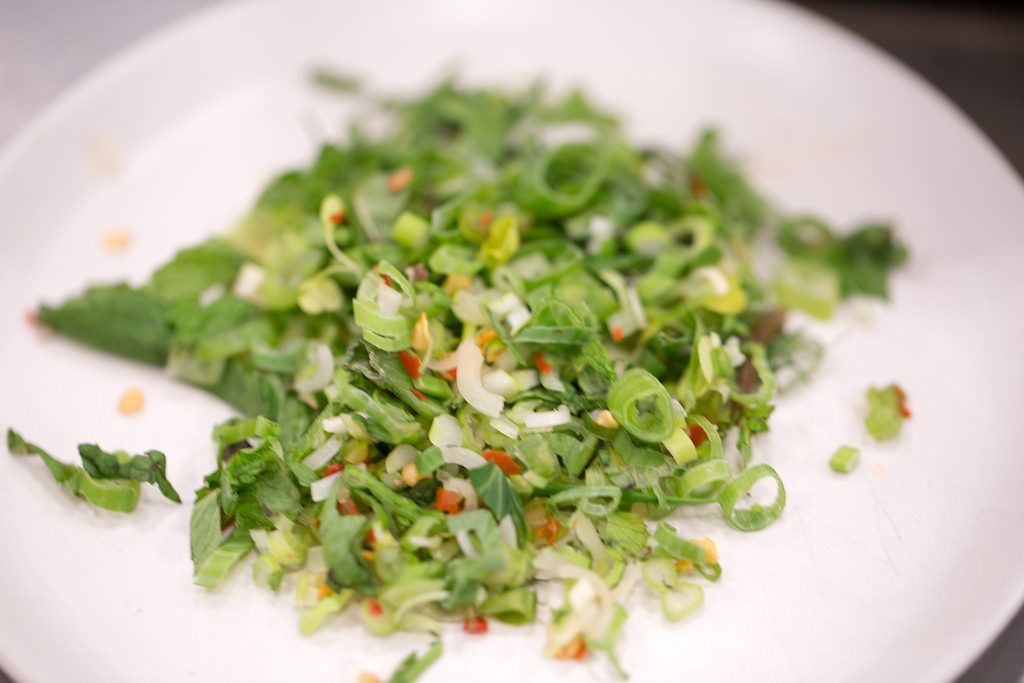 Dan immediately set to transforming our scraps into a beautiful, restaurant-quality dish with two rules: Use as many of the scraps as possible, without the addition of any other foods. In a food processor, he pulsed together the parsley and scallion scraps along with some citrus zest and his own stale bread to make a "gremolata." He said, "Stale bread was the only ingredient that we added to the dish [in addition to the Food52 scraps], aside from salt and pepper."

Meanwhile, he blanched and puréed the discarded greens (some parsley leaves, kale, and a few pieces of romaine that snuck into the mix) with some sautéed onions and water to make a green sauce. He then julienned the large pasta shells into narrow strips, approximately the width of linguine, and blanched the peas.

The final dish. (Who knew our kitchen scraps could look so beautiful?)

Finally, he sautéed the bok choy butts (his term, not ours—though we're thinking about adopting it) to slightly caramelize the tops. In a sauté pan, he heated some garlic in oil, then tossed the "noodles" from the pasta shells into it along with the blanched peas and kale. To plate the dish, he spooned three small circles of the green sauce onto a plate, on top of which he placed three bok choy ends, carved into florets. He sprinkled the gremolata into each bok choy flower, then garnished the dish with the noodles, peas, and sautéed kale leaves—who knew pasta could make such an apt garnish? But then the truth came out: "I think we also shaved some dehydrated blood sausage over the top—I guess that was cheating, too." You know what we call cheaters at Food52? Competition. The next day, we came out with our own (completely by-the-rules) scrap dish. 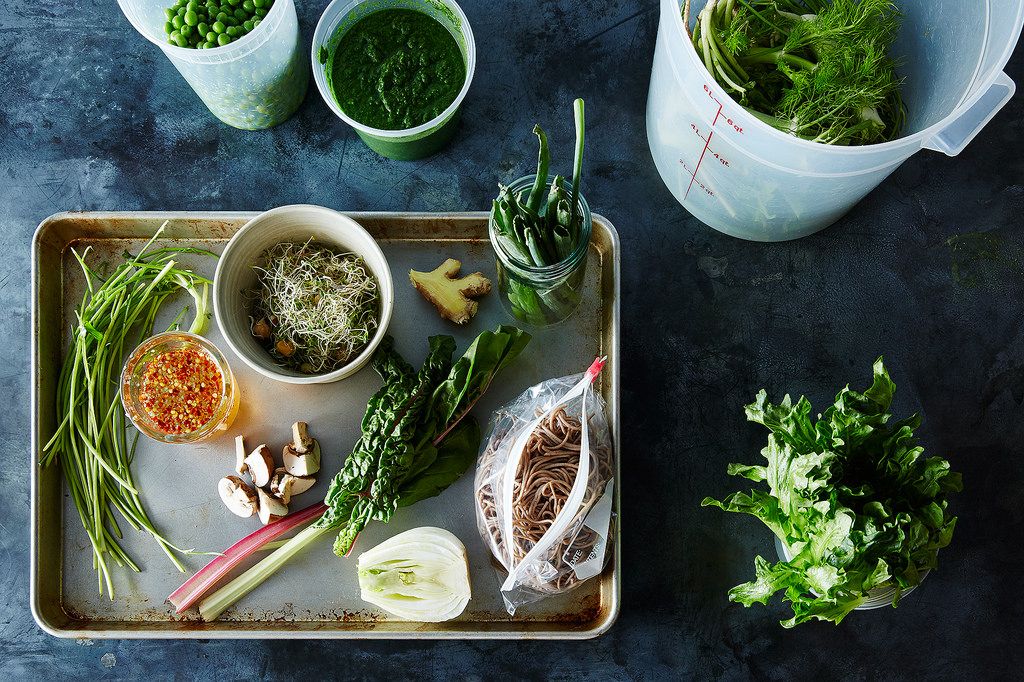 The kitchen scraps we had to work with including some mushrooms, soba noodles, a fennel bulb, and lots of greens.

Flash forward to yesterday morning and we kept looking at Dan's creation. Dehydrated sausage or not, it inspired us. By the end of the day, we had gathered our own set of scraps for round 2: cilantro stems from a Thai gremolata, lime from an upcoming post on blended drinks (Spoiler alter: Piña coladas are coming to a Food52 near you), sprouts left over from the previous day's avocado toast, egg yolks from an upcoming Genius recipe, and soba noodles from Braised Peanut Curry Chicken. An upcoming Genius stir-fry was the greatest gift of all. It gave us leftover mushroom stems, ginger, arugula, chard and parsley stems, limp scallion greens, and a fennel bulb and fronds. After making a rudimentary list ("Soba noodle salad with an herby vinaigrette topped with egg yolks??"), we set to work. 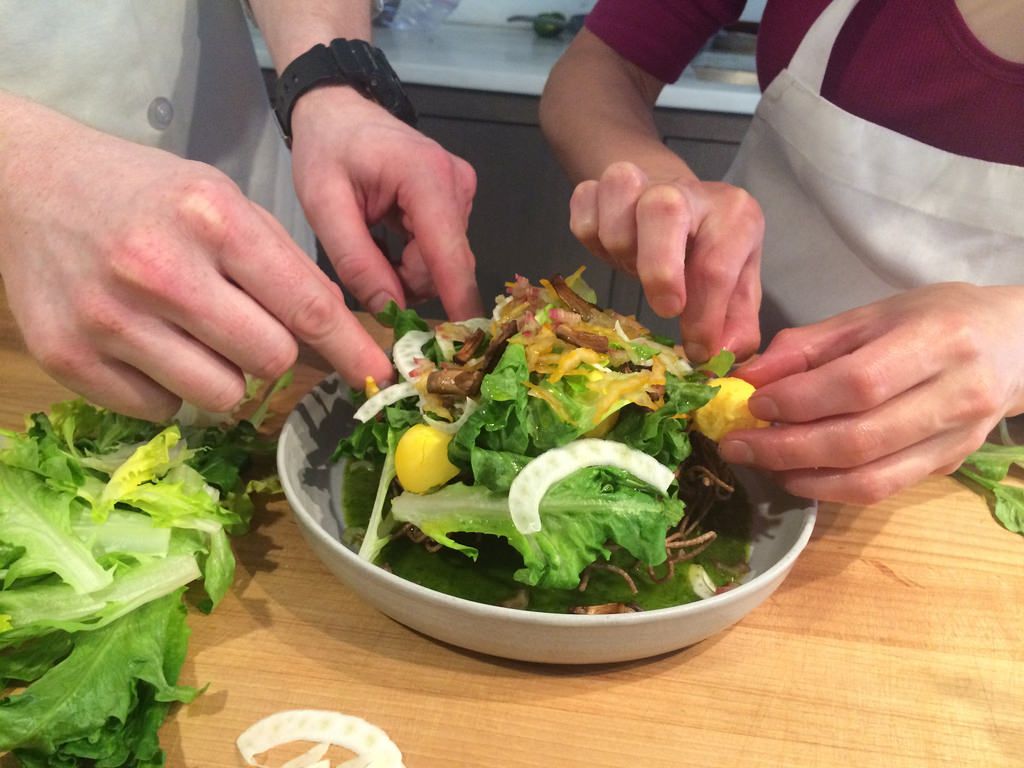 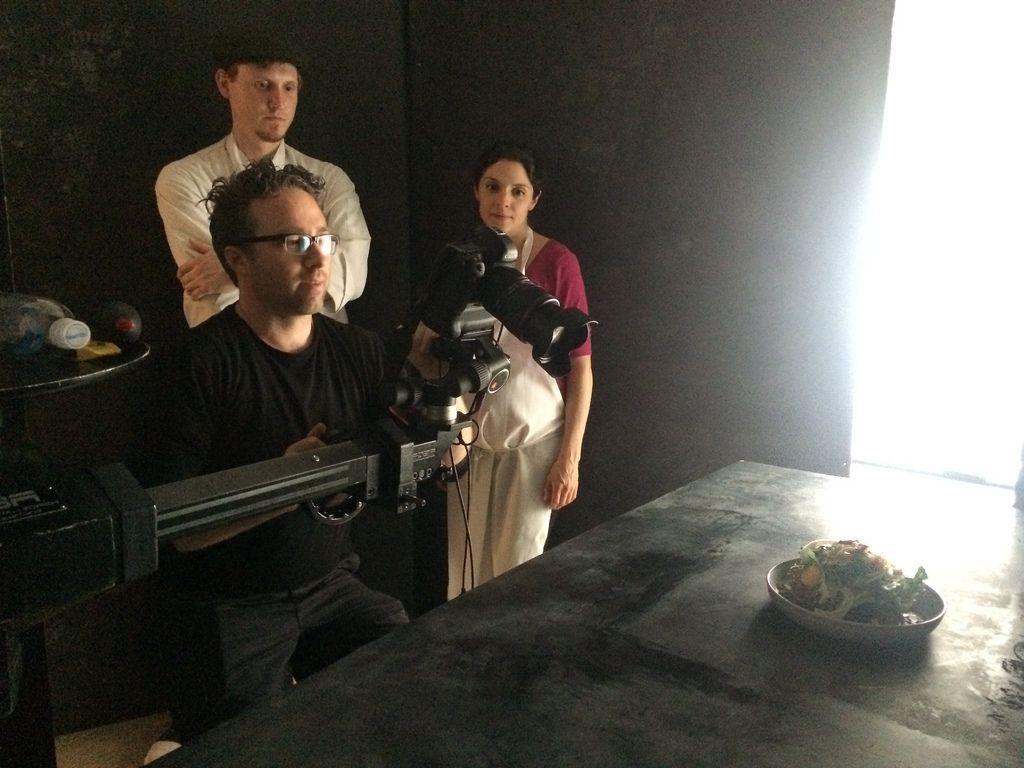 Our test kitchen managers, Derek and Allison, began by pan-searing the mushroom stems until lightly browned and cooked through. They then fried the soba noodles in vegetable oil for roughly 30 seconds into a crispy nest. Derek puréed the parsley and cilantro stems, scallion greens, ginger, arugula, and lime zest and juice into a lime-based vinaigrette while Allison arranged the soba noodles into a "bird's nest," topped with the hard-boiled egg yolks and some baby Bibb lettuce, recovered from the back of the fridge. They garnished the salad with shaved half-moons of fennel bulb and some fronds, thinly sliced chard stems, and some of the seared mushrooms, and voilá! Kitchen scraps fit for a king.

Our final product, the Spring Cleaning.

The hardest part was naming the scrap salad. When I came over to take a look at the final photo, I found Derek sitting on the ground, Allison hunched over, and James, the photographer, leaning on his desk with with both hands at his forehead. It had been a long day. After several seconds, James broke the silence. He declared, "I shall call it my squishy," clearly feeling the effects of the day. Derek weighed the merits of "Nesting Insticts" while James came back with, "Freegan Amazing." In the end, "Spring Cleaning" won unanimously. We hope that's what Dan Barber calls it when he puts it on the menu at Blue Hill. (We're only half-joking.)

How do you use your dinnertime scraps? How do you think we did? Tell us in the comments below!

Photos of Dan Barber's dish courtesy of Blue Hill; final and ingredient shot of Spring Cleaning by James Ransom; all others by Leslie Stephens

Cookie July 12, 2016
Wonderful post and beautiful dishes. Meat and bread scraps, as well as juicing pulp(!) are spoken for by my 100-lb. Lab, but I use veggie scraps for stock, which I find indispensable for sauteing, and occasionally use for a sauce or marination base. Any root vegetable butt or peel, outer leaves of cabbage & radicchio; parsley & cilantro stems, leek & beet tops, etc. So much better than store-bought veggie stock.

Rhonda35 October 19, 2015
A CIA-trained friend was required, as all students were, to weigh the scraps from each day's cooking. This taught the students to be frugal with ingredients because waste equals lost profits in a restaurant kitchen. Time spent in the kitchen with her, as well as cooking with my Depression-era grandmother, has taught me much about avoiding food waste and repurposing scraps. Sadly, I can't claim to be as creative as Dan Barber or the Food52 crew - very interesting to see what you made from your grab bags of discarded food.

Florence L. May 18, 2015
And don't throw out your kids' uneaten sandwiches. They make great additions to your Friday soup, aka the Week in Review, alongside other small leftovers. Thank god for blenders!
Author Comment

Leslie S. May 18, 2015
Ha great advice! We once used my grilled cheese from the day before for croutons on a salad for the editors—it was surprisingly successful!

SLittlejohn May 18, 2015
I tend to save bits and pieces and add to pasta sauce (carrot tops, parsley stems, celery leaves etc). I've also save stems, "butts" and such in a freezer bag to make my own veggie stock. I grow a lot of veggies in season and use every little bit to save the money spent.
Author Comment

Leslie S. May 18, 2015
A great idea! I've started doing this myself and i've been throwing away much less!

Windischgirl May 17, 2015
I'm surprised that most people don't cook like this. It requires a shift in thinking, towards techniques and away from specific ingredients. Example: pesto can take a variety of ingredients to make a thick sauce bound with oil. Stir fries, soups, main dish salads, pasta dishes, fried rice are all amenable to this approach.
If adherence to a recipe is a symphony, this approach is Jazz. Bring on the improv!

carol May 17, 2015
Being raised in an an Italian household, we never throw anything away. Most times wilting greens, ends or butts of veggies, leftover meats and cheeses wind up in a frittata or soup.

Gardener-cook May 16, 2015
I'm curious about Mr. Barber's dish. Could the whole butt ends of book choy really be eaten? I have one in the refrigerator so I went and picked at the butt end, and it seems to be pretty unyielding and unappetizing. I love the fermenting idea, but I have a backyard goat, so my veggie scraps are mostly spoken for.

Babette's S. May 16, 2015
I tend to be slightly OCD frugal, partly from my upbringing in the 50s and 60s. My monther is still an amazing cook at 87 (as of today). Her small family of her mother and younger sister (here dad died when Mum was 9 and she took over housekeeping when my Grandmother went to work, Gram owned a restaurant when she met my Grandfather and she worked as a hotel and diner cook for most of her adult working life). My Dad's parents were Italian immigrants who raised 12 kids and they raised much of their food. I guess that's why I try to use most and throw away little. I use a marker to date all of the stuff in my pantry and fridge to make sure I use stuff up before expiration dates. I find soups and pasta make great use of leftover bits of this and that. I've been using veg leaves and stems for years for flavoring soups and sauces. I always think before I toss out something that isn't spoiled or rotting.

LouLou2222 May 16, 2015
I love the fermenting idea. I very often add carrot pieces, zucchini leftovers, celery to pickle juice after finish our pickles. It takes a day or two of marinating and even tho they're still crunchy, they're yummy. Also, I freeze parsley, thyme and rosemary stems to later flavor our soups. I also save bits of vegetables to make fried rice or to add to tofu( we are vegan ) when we're having lettuce wraps.

rudder May 16, 2015
Wow those are some beautiful dishes! Very inspiring post, I'll be thinking twice next time I come across remnants of a cooking session =)

Radish May 15, 2015
I liked this post. We eat a huge amount of vegetables at this house. I do have all these vegetables in different states in the refrigerator that I end up throwing away. I like Antonia-James idea about the fermenting. But even that is too complicated for every day use. This is a good subject.

AntoniaJames May 14, 2015
Hard stems and end pieces from any traditionally Asian brassica, especially mustardy Chinese greens of all kinds, and napa cabbage (which becomes more mustardy over time) can be pickled using salt as you would sauerkraut (lacto-fermentation), to use as a garnish on stir fries, noodle dishes, etc. with Asian profiles. (This, I've been told, is how the "Chinese Preserved Vegetable" that you see mentioned on restaurant menus is made.) ;o)