How to Cook Frozen Dumplings Fearlessly 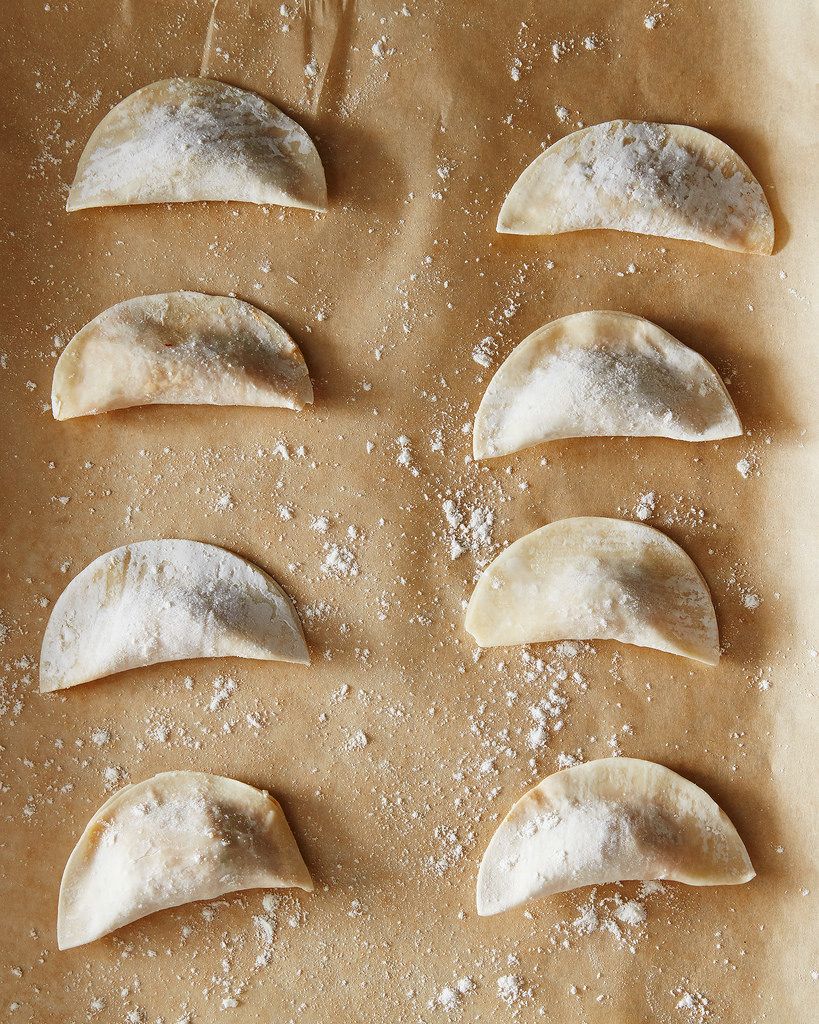 If you love dumplings, you likely keep some in the freezer like I do. Pot stickers, siu mai, and bao are part of my frozen food bank. I make a bunch, cook a portion, and freeze the rest. When a hankering for a dim sum-ish brunch or pre-dinner dumpling snack arises, I head to the freezer and rummage for zip-top plastic bags and tubs of dumpling gold. In about 20 minutes, I’m eating dumplings with little sweat on my brow.

You don’t have to go the total DIY route to maintain a frozen dumpling stash. It’s okay to buy them. Many Asian cooks do. (Maybe you’ll graduate to making your own, but I’ll save that for another time.) The key to dealing with frozen dumplings boils down to strategically coaxing them from frozen nuggets to perfectly cooked bites.

Earlier this year, Food52 editor Ali Slagle posed this question on the Hotline: “Whenever I make frozen dumplings, they're never as good as I want them to be—either they're totally mushy or perfectly crisp but all the dough isn't quite cooked. Do you have problems preparing frozen dumplings?”

Yes, I’ve had issues with cooking up frozen dumplings—problems just like what Ali described. However, after preparing and writing about dumplings for years, I figured out a few things. Here they are for your consideration: 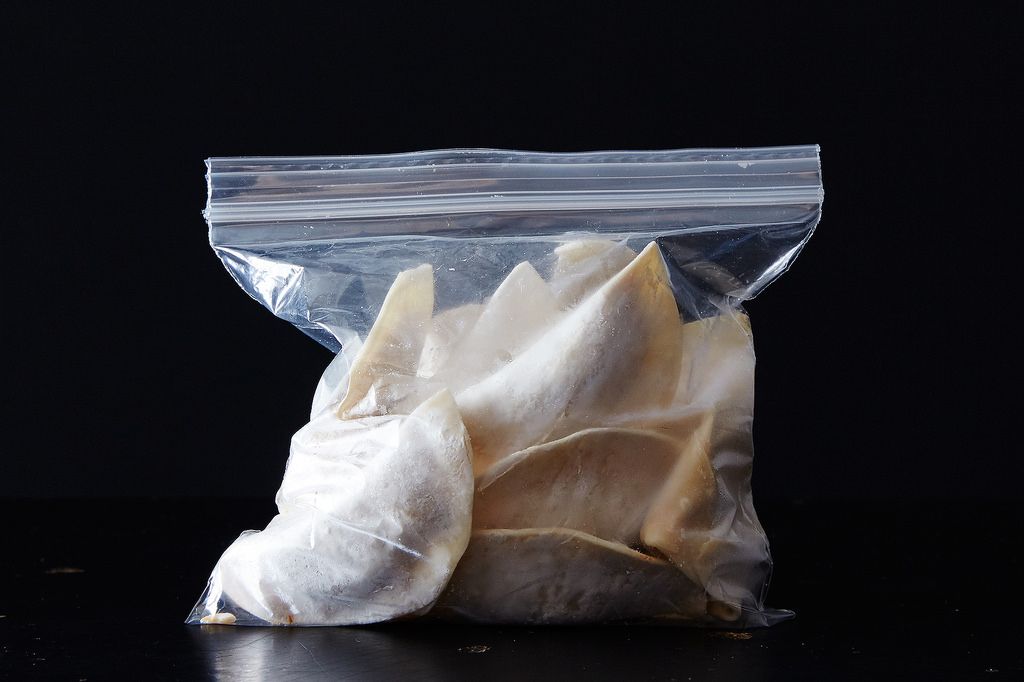 It doesn’t really matter if the dumplings were purchased or homemade—they are frozen parcels of filled dough. Ideally, bagged dumplings such as pot stickers and gyoza (the Japanese term for Chinese-style dumplings) have not thawed in transit and reformed as one gummy ball—they should be individual entities. That would be no bueno in the world of commercially-made frozen dumplings.

If you're purchasing store-bought frozen dumplings, give the bag a shake to make sure the dumplings are not stuck together. Transport them home relatively quickly (or with other cold items), then put them into the freezer ASAP.

If you make the dumplings yourself, freeze them on parchment paper-lined baking sheets until hard, then put them into a plastic zip-top bag. They’ll keep well for a month. Ditto for Chinese-style spring rolls and eggrolls, as well as Filipino lumpia. Dumplings such as siu mai and har gow have delicate skins so they should be packaged carefully. I freeze uncooked siu mai just like pot stickers but I store them in a freezer container.

Har gow are usually precooked before being frozen, but their wheat starch-based wrappers require special handling. However, like LE BEC FIN pointed out on the Food52 Hotline, commercially-made frozen har gow don’t cook up well. I’ve given up on those and freeze homemade ones—when I haven’t eaten all of them fresh, that is.

Leavened bao (stuffed buns) are steamed before being frozen. They keep like a dream and shouldn’t have any problem with sticking. You can practically toss them between your hands. 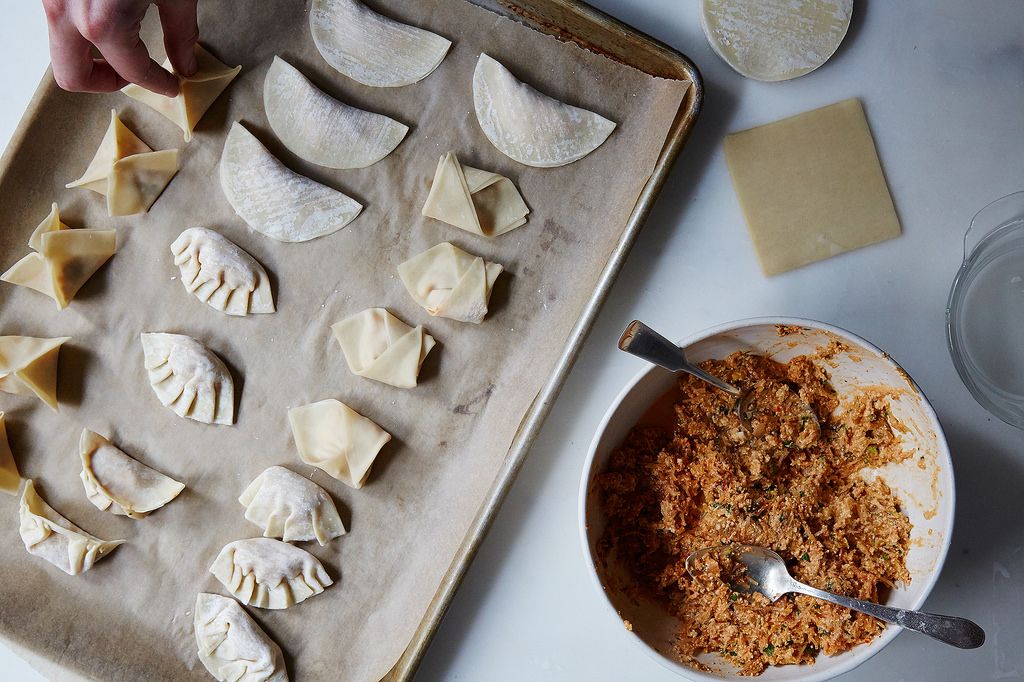 Should you Cook Dumplings Frozen or Thawed?

Cooking dumplings straight from the freezer is not a good idea—even if you’re just going to poach them and tumble them in chile oil and soy sauce. The dumplings may clump and stick in the pot of boiling water unless you carefully watch the pot and nudge the dumplings.

Before cooking dumplings that have been frozen, partially thaw them by letting them sit on the counter for 10 to 15 minutes—the amount of time it takes to make dipping sauce and/or get the steamer going. That ensures even cooking. If little ice crystals are clinging to the wrapper, brush them off as you take the dumpling from its bag.

Put dumplings such as pot stickers and gyoza on parchment dusted with flour to prevent sticking; there’s nothing like going to transfer the partially thawed dumpling to the skillet, only to discover a mushy wrapper meltdown. To prevent that, lift the dumplings every 5 minutes or so to ensure they’re not sticking to the paper.

If there are cracks in raw wrappers, let the dumpling partially thaw till the wrapper gets a little soft and maybe even mushy, then smudge and smooth over the crack with a fingertip. If that proves difficult, move forward. There will be other dumplings to cook and eat.

Spring rolls, eggrolls, and lumpia usually don’t have a moisture issue, so partially thaw them before frying. Destined to be steamed, siu mai and har gow ought to be arranged on lightly oiled parchment paper set in the steamer tray; the less you move these delicate dumplings, the better. Bao can just be thawed and resteamed or warmed in the microwave oven.

The world of Asian dumplings is vast and the type of skin usually governs how they’ll perform after being frozen. Dumplings have quirky personalities, so decipher the differences and you’ll master how to cook them extra well. 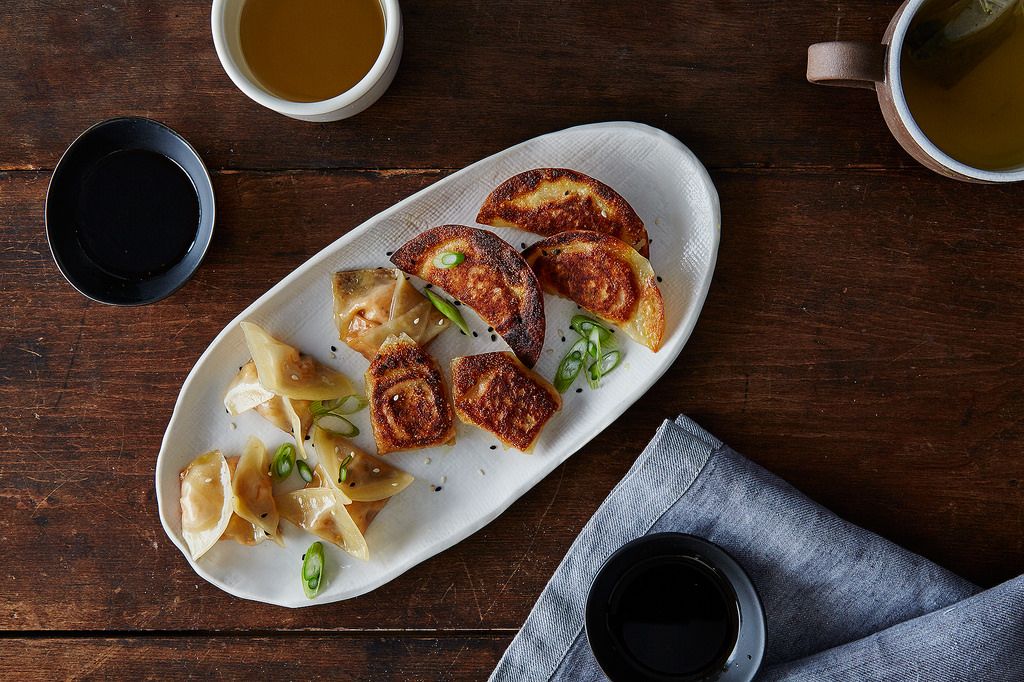 Once the dumplings are thawed, there are many ways to cook them. Refer to this guide to learn more.

Skinny B. June 4, 2015
I have tried cooking frozen/ thawed potsticker dumplings multiple times. Eventually I found that cooking frozen dumpling is the best. In order to ensure the uncooked filling is thoroughly cooked while maintaining potstickers' crispness, I first pan fried the frozen dumpling with medium heat until they are lightly browned. Next I add a splash of water and cover the pan with a lid. After about 10 min most water would have evaporated during which the dumpling is being steamed. After the water evaporates, the exterior of the potstickers will crisp back up!

Andrea N. June 4, 2015
Fry-steam-fry is the method to pot sticker perfection. Thanks for sharing your dumpling tricks!