How (Not) to Make Gushers

Today: Molly Yeh of My Name is Yeh may be the most determined person we've ever known. We thank her for discovering the 300 ways that we shouldn't make Gushers. 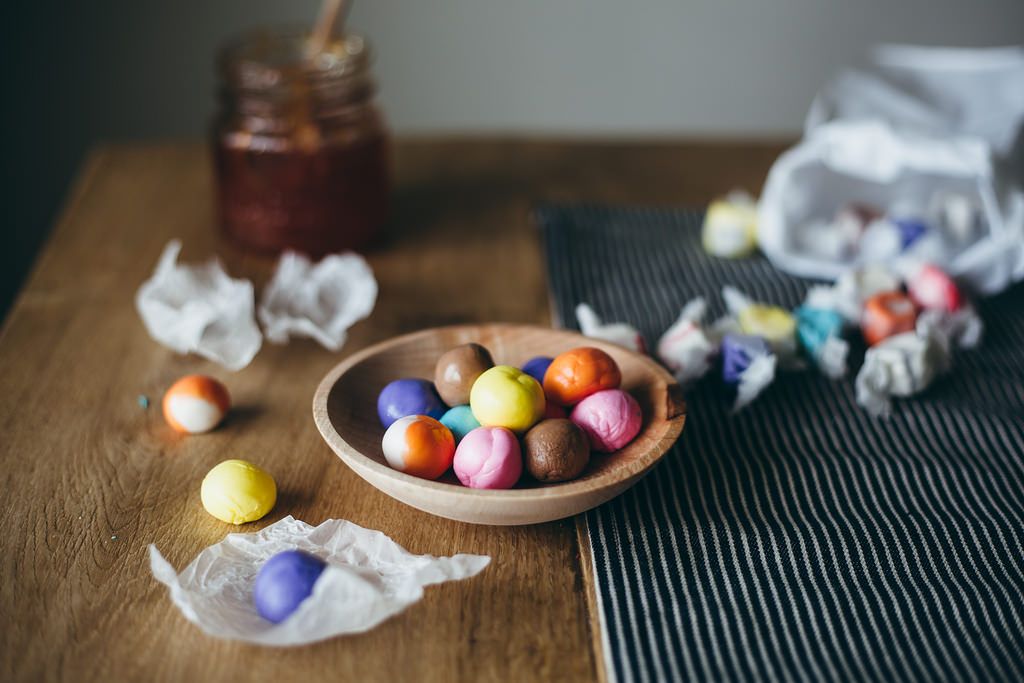 What’s that Thomas Edison quote about how he never actually failed at inventing something, he just found 10,000 ways of how not to make it? This was my life for the past month, but with Gushers. The tasty, chewy, forbidden-in-my-youth fruit snack that “gushes” with sweet juice when bitten into.

Throughout the process, I asked myself time and time again whose idiotic idea it was to make these things, as it became clear that a homemade, vaguely accessible Food52 Small Batch-worthy Gusher would not be invented on my watch. I don’t know—I was on a high after my Funfetti experiments and I felt like I could conquer the world of 90s colorful sweets. 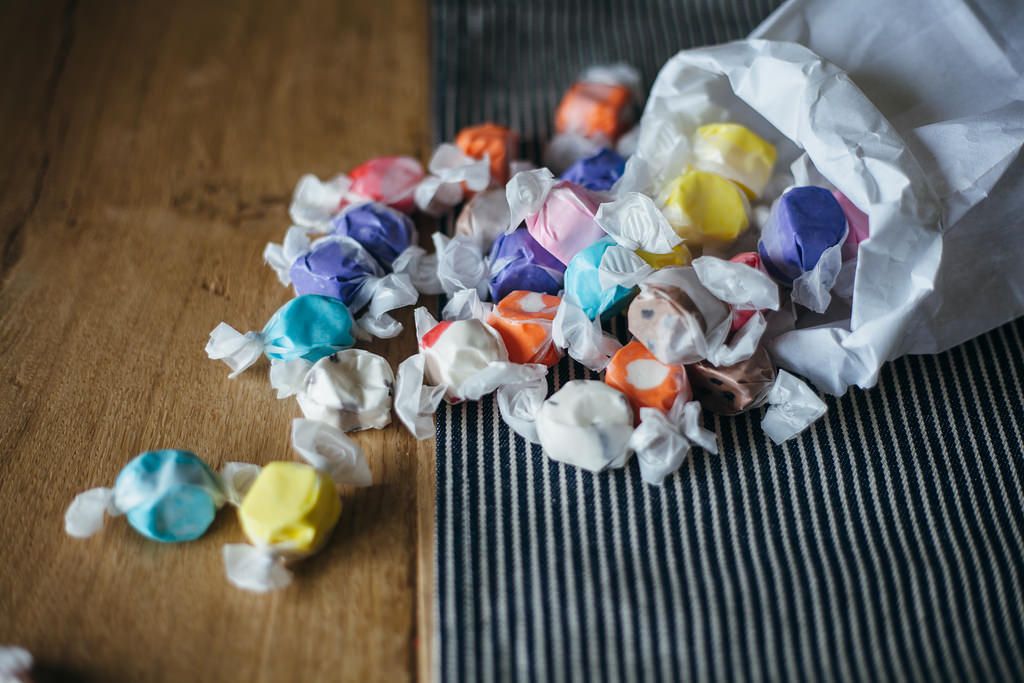 And yet here I am with 300 ways of how not to make a Gusher; in their place I have one semi-homemade, time-sensitive hack that is probably better fit for Deranged Crafts, and a load of despair.

So if you came here for a homemade Gusher recipe, there is kind of one at the end—with like 5,000 disclaimers. If you came here to read about kitchen experiments, and you also didn’t totally mind the non-closure at the end of Serial, you’re going to have a similar sensation here (on a much smaller scale). Maybe this will even spark your own experiments, and then you can be the one who brings a homemade Gusher into this world. Just give me a year to recover from all of this before you tell me about it. 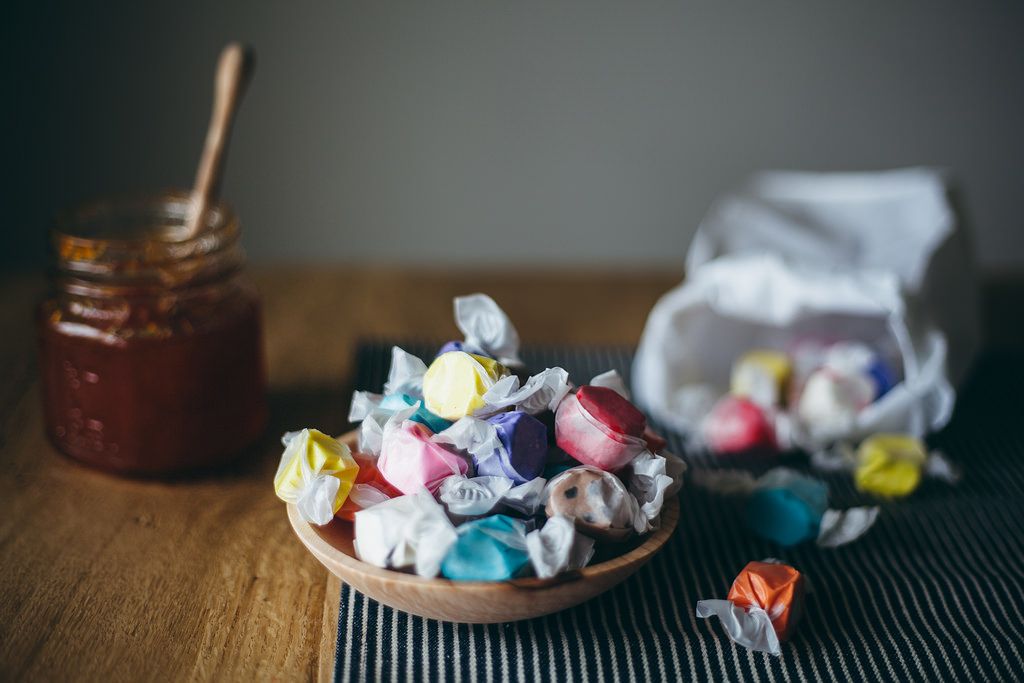 Alright, here’s what I was thinking when I told Food52 that I was going to make Gushers: syringes. Syringes paired with all of the pretty, homemade gummy recipes that I’d seen floating around Pinterest. Just make a ball of gummy, inject it with juice, patch up the syringe hole with a bit more gummy mixture, and voilà!

This didn’t even make it to the testing phase because in some states, without a prescription (or illegal drug dealer connection?), getting syringes is kind of difficult. I also couldn’t quite conceptualize making a gummy ball with a hollow center that would be a space for the filling.

The first test that made it into my kitchen was inspired by Xiao Long Bao: Chinese dumplings that are filled with soup. How do you get the soup into a dumpling wrapper? You mix soup with gelatin to make soup Jell-O, fill the dumplings with cubes of the Jell-O, and then when the dumplings are steamed, the Jell-O melts into liquid. "Great!" I thought. Let’s take the temperature down a bit, freeze a Gusher filling, stick a cube of it into a homemade gummy (a mixture of gelatin, fruit juice, and sweetener), and then let it all sit at room temperature until the cube melts. 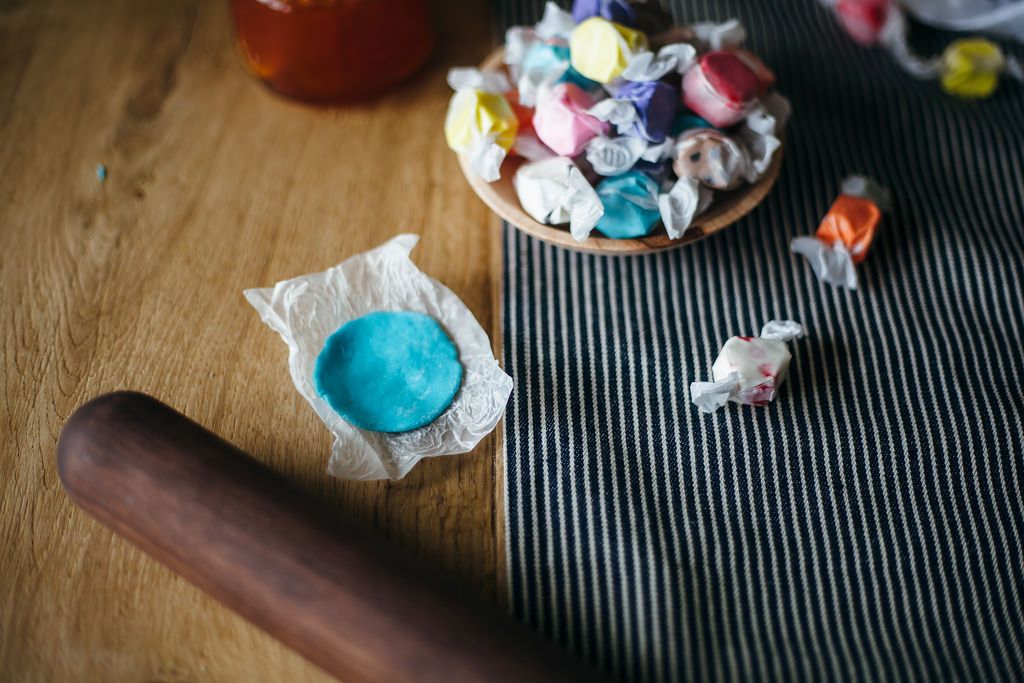 I purchased the tiniest ice cube molds I could find and froze grape juice, along with grape juice reduced by half to form a syrup and jam. None of them really wanted to come out of the ice cube tray. I did manage to get a few good chunks out of there, but with such high sugar content, the nuggets melted quickly and were a bitch to deal with. In the end, it didn’t matter, because my methods of getting the little cubes into the gummies all failed:

After these attempts, I gave up on the Xiao Long Bao method because the tiny cubes were just too sensitive and fussy. 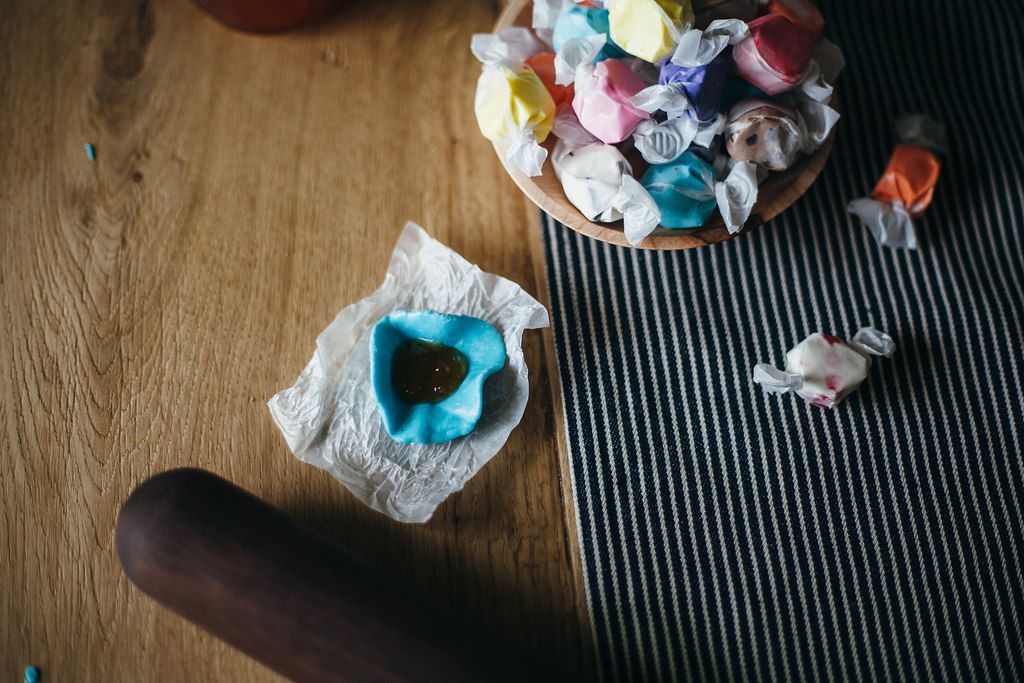 Okay. So I tested each of these methods a bunch of times before I was faced with a giant, crying elephant in the room: It occurred to me that throughout all of this testing, I had not consumed one homemade Gusher. Nor had my husband, nor had my trusty assistant Kristin who stood by me through all of this. Yes, we put these in our mouths to test them, their Gusherability, their chewiness, their flavor. But after they gushed or didn’t gush, they all got spit out because they were gross nuggets of gelatin. Not one variation on the theme of homemade gummies tasted good or tasted like a Gusher shell, and I was too hung up on the process of getting the filling inside of it to realize this. 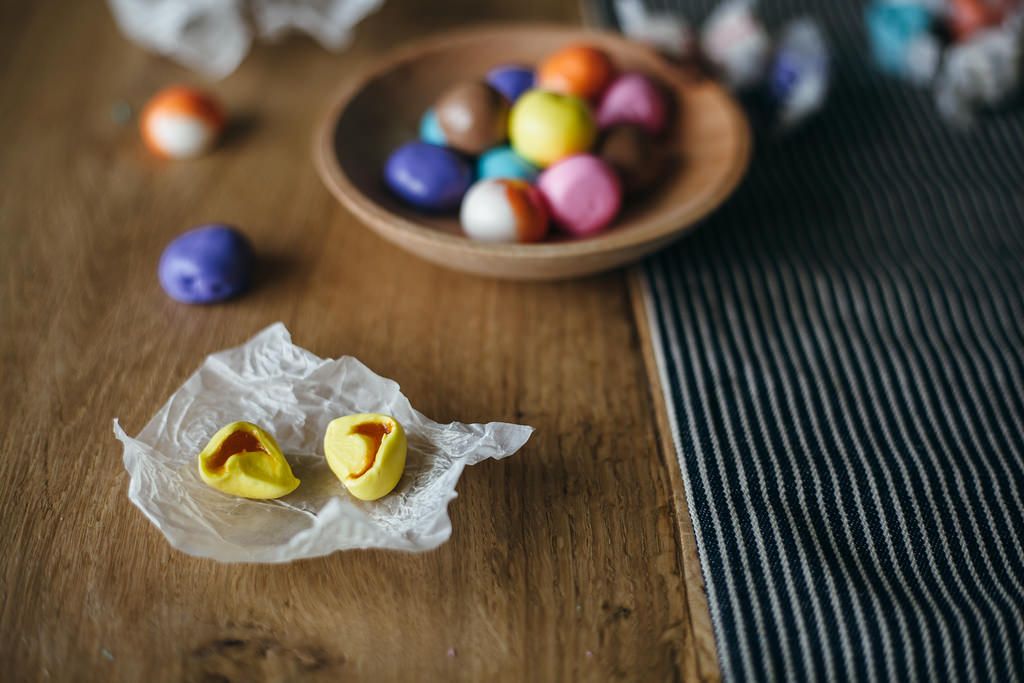 What was worse was that when I turned my back to start writing down my notes, all of the uneaten Gushers melted and bled out. The juice had dissolved. 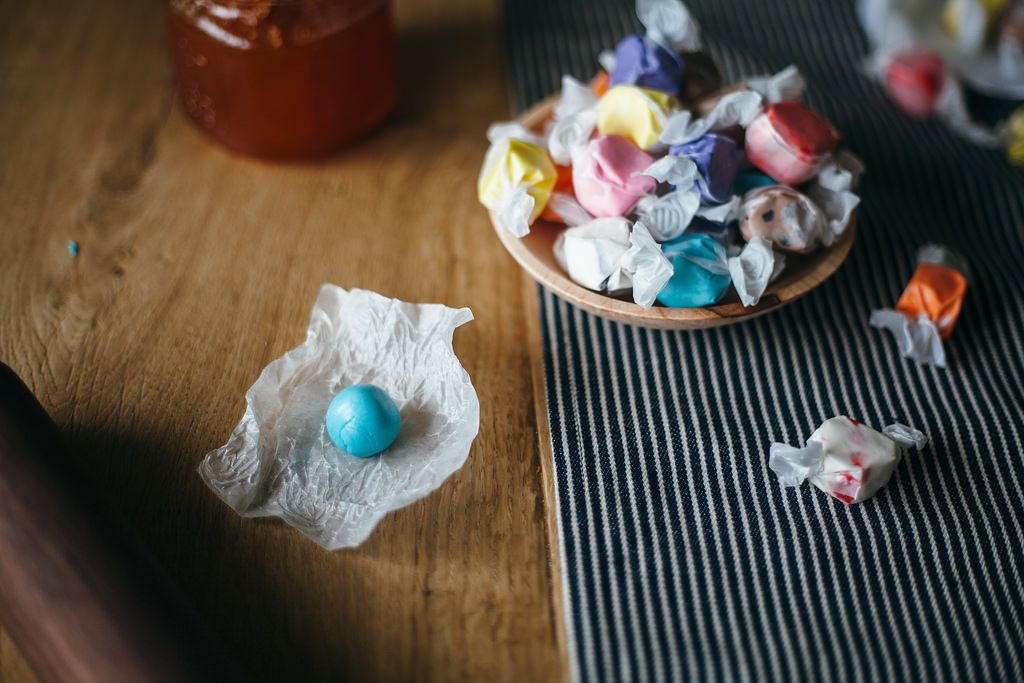 So, I needed to find two solutions: a less fussy, easier-to-handle outer shell, and a thicker, sturdier innard.

(I’d like to note that this entire time, a miniature Wylie Dufresne sat on my shoulder whispering “molecular gastronomy.” I imagined little caviar balls of juice and foreign, hard-to-pronounce substances opening up worlds of possibility, but in the spirit of keeping this recipe for home cooks, I told mini Wylie to shut it.)

I returned to the jam and my piping bag and went out to buy saltwater taffy. When I returned home, I rolled the taffy out into a wrapper, which I then rolled jam into. Within minutes, I had a pile of perfectly blobby Gushers. Semi-homemade, artificially flavored, gushy Gushers that last about an hour and are really quite weird when you think about it. Because they’re just saltwater taffy and jam.

But my deadline was near; I was exhausted of ideas, and so, so sick of putting things in my mouth and hoping they would gush.

So friends, I am sorry to let you down, but consider this a head start on your future Gusher inventions. Godspeed. 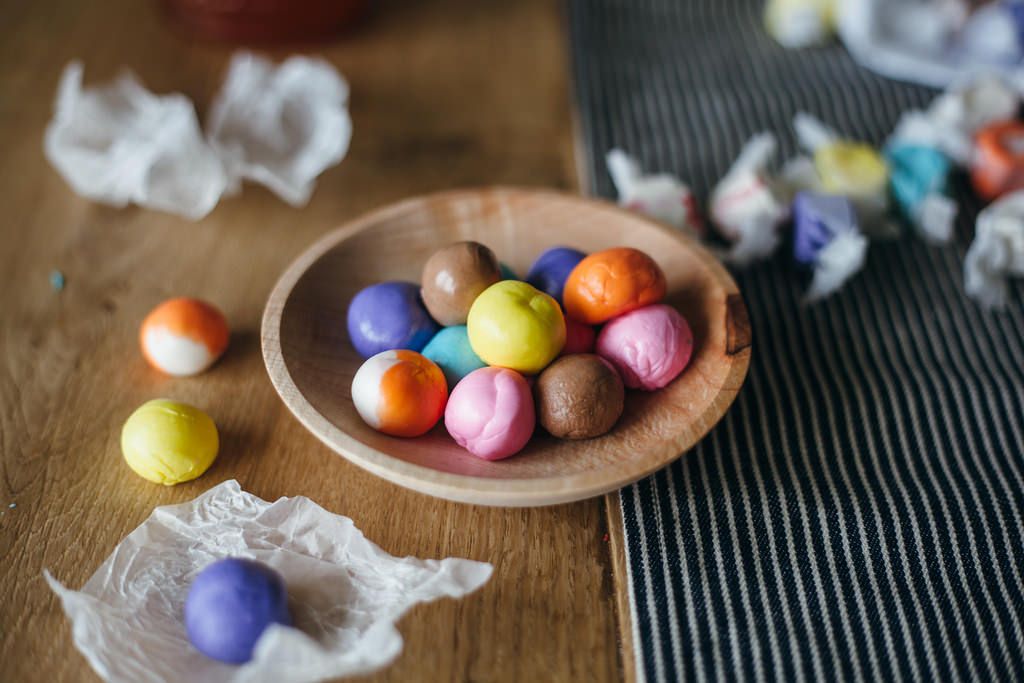 See the full recipe (and save and print it) nowhere.

d W. September 8, 2018
People are complaining. Just delete my comments. This is a great site and I don't want to get kicked off it for not being socially acceptable. sorry for offending people. I will be nice. Delete the offensive comments. I will also behave in the future. Good night

d W. September 8, 2018
Sorry if I said something out of line...don't remember the post. Thank you for removing it if it was offensive.
I just saw the 2 year old comment...It reminded me of my military time...I am not a politically liberal person, I served in the Army...my family has served in the military since the Battle of Bennington in the Revolutionary War when the Colonies revolted from England. Snipers are people who are specially trained to shot long-distance targets in the military. I am proud of my service to my country as the men are proud of theirs. i forget that people are sensitive to normal talk due to un-natural reactions to the crazies who have been taking license with laws and the liberals who want to ban law abiding citizens from having firearms...weapons are used in war and law enforcement since we are dealing with semantics.

Angela September 8, 2018
If you can bear to see success (though also some failures):
https://m.youtube.com/watch?v=fEMxFSjmo5Q

Nathanael P. October 21, 2015
Actually you can get sugar to liquify at room temperature. Remember Cherry Cordials. You actually take a maraschino cherry, wrap it in fondant, coat it in chocolate, and let it "ripen". Takes about a week. Now let's say you make a flavored fondant, cut off a small ball, coat that in gelatin, let that ripen at room temperature, well you just might have it.

Nathanael P. October 21, 2015
Actually on second thought, I think I would amend my previous comment. The Fondant "melts" because it absorbs the moisture from the cherry it covers becoming liquid as sugar is hydroscopic. Therefore, take a small piece of fruit, cover that in a thin layer of fondant, make sure it is dry and cover that in gelatin. The fondant should absorb the moisture from the fruit, liquify, and become a gusher.

xkandakex September 2, 2015
https://www.google.com/patents/US20050260329
If you really, really want to know how Gushers and other liquid filled gummies are actually made, read over the above patent. The CLAIMS section details the composition of the liquid and shell, and how the candy is made.

Craig A. August 18, 2015
Make the outer shell without using taffy, make your outer shell and put in dumpling form. Then get unflavored gelatin, use your favorite flavoring or juice, melt the gelatin and juice together making sure to use enough gelatin so when cooled it is solid but jiggly (you may need to adjust how much gelatin to use). Put gelatin mix in center of candy and close it up. When is was young my grandma and mom would make this and when it cooled if was fun to eat by itself. They used fresh fruit that was in season, fruit juice or jello with extra gelatin. If we had celebrations at grandma's she would make a ton of these for everybody to enjoy. I hope this works for you and try experimenting to your taste (an adult treat is to use wine with the gelatin) but have fun. I am still laughing about the article and thanks for reminding me about grandms and the good times at her house.

Ashley H. August 17, 2015
This is wonderfully hilarious. Thank you for sharing your wild ride of gummy!

d W. July 11, 2015
I am sharing this with my friends who might not have this. too funny. great tenacity. Were you ever a sniper?

Peggy F. July 11, 2015
The photos are so beautiful, and make me want to bite, chew, slurp...I admire your tenacity and so enjoyed reading about your creative process. The solution may yet be found. (Perhaps in a dream...?)

Maria S. July 10, 2015
Oh my gosh, I love how realistically this represents the recipe development process! I am cry-laughing!

Alan S. July 9, 2015
If you still want to try the syringe method most states allow farm supply stores to sell syringes for animal care. They tend to have bigger bore needles but they are sterile.

lobstaharmonica July 9, 2015
Now I am seized with the idea of somehow using tapioca balls and am not getting my work done!

Betty July 9, 2015
Oh Molly. This article is a gem. I loved reading through it and I love all your experiments using Xiao Long Bao method. In theory it makes total sense!!!! :)

Saffron3 June 5, 2015
Oh what a great sweet read! Kudos followed by applause for making me smile and laugh with you.

Leandra June 5, 2015
LOVE everything about this

Nozlee S. June 5, 2015
omg you are a shining beacon of tenacity and perseverance in this dark world.