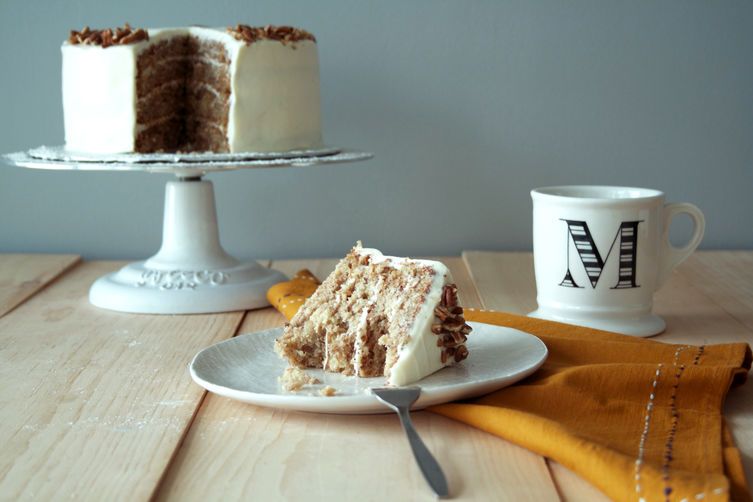 I accidentally stumbled upon this Southern gem when I was looking for an interesting way to use ripe bananas (not that I don’t love making a weekly batch of banana bread, but sometimes I want to go all-out). The cake was so sweet, moist, and dense, with the perfect amount of crumble to each bite—I could hardly put my fork down. Now, it’s the cake that I request every year for my birthday. I prefer the cream cheese frosting to remain somewhat tangy, so I don’t overkill it with the sugar in the icing—but I won’t judge you if you do. So let the Carrot Cake 2.0 baking commence: 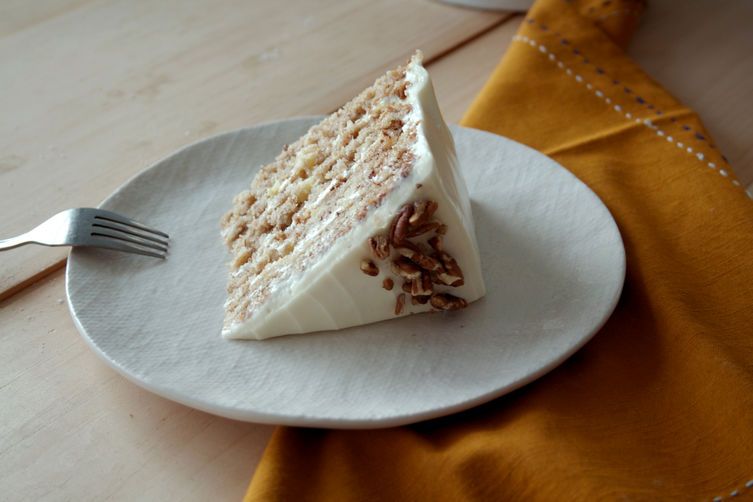 Note: No hummingbirds were harmed in the making of this cake. 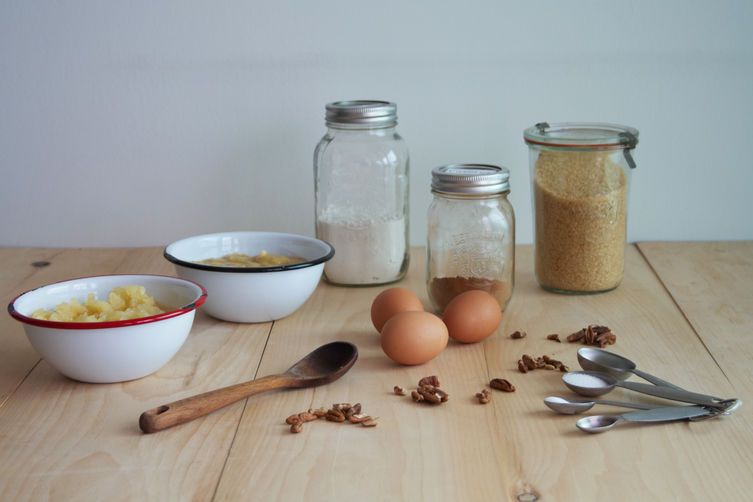 Preheat the oven to 325° F. Grease two 8-inch circular cake pans, and set them aside. In a mixing bowl sift the flour, baking soda, salt, and cinnamon. Set aside.

In a separate mixing bowl, use a wooden spoon to mix together the sugar, oil, eggs, and vanilla until well combined. Stir in the pineapple and bananas. Add the coconut, if desired. 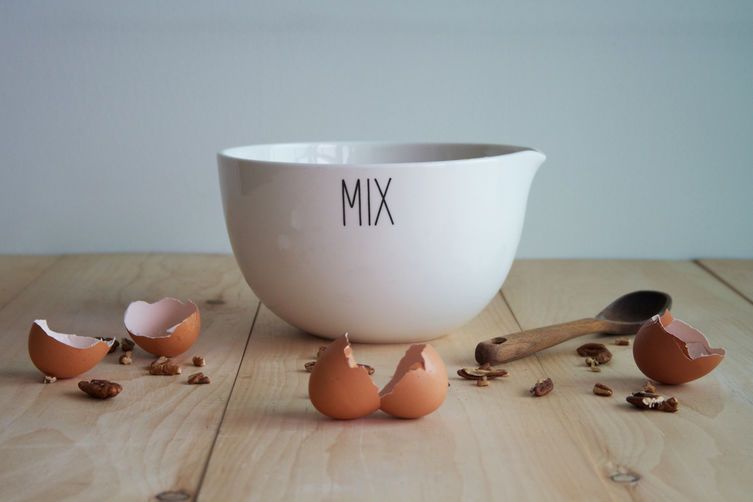 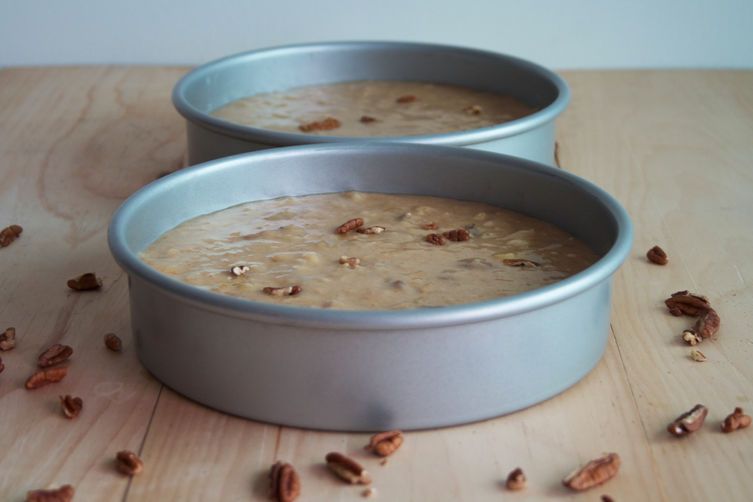 Add the sifted dry ingredients to the egg mixture and stir them together until just combined. It is important to not over-mix this batter. Stir in the pecans and evenly divide the batter between the two cake pans. Bake until a toothpick comes out clean, approximately 25 to 30 minutes.

Let the cakes cool completely before removing them from the pans and frosting them. 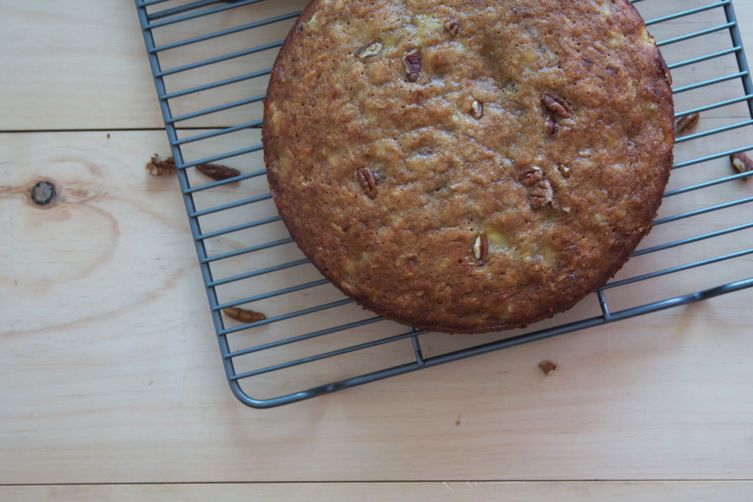 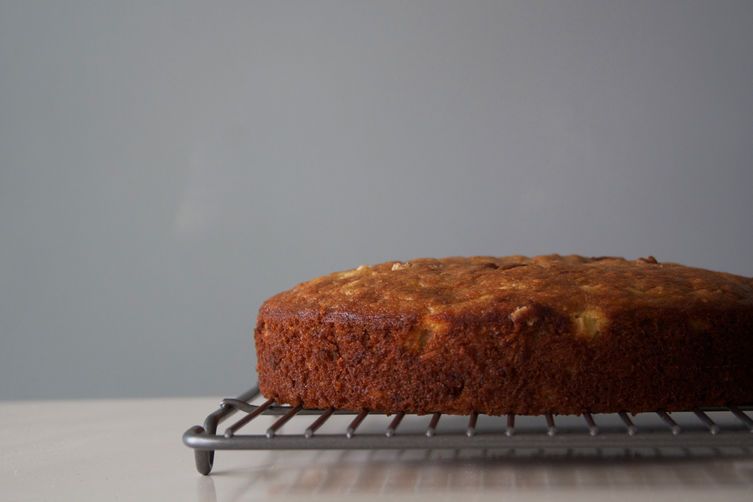 To make the frosting, attach a whisk attachment to your stand mixer. In it, beat the butter, sugar, and vanilla until light and fluffy, approximately 8 to 10 minutes. 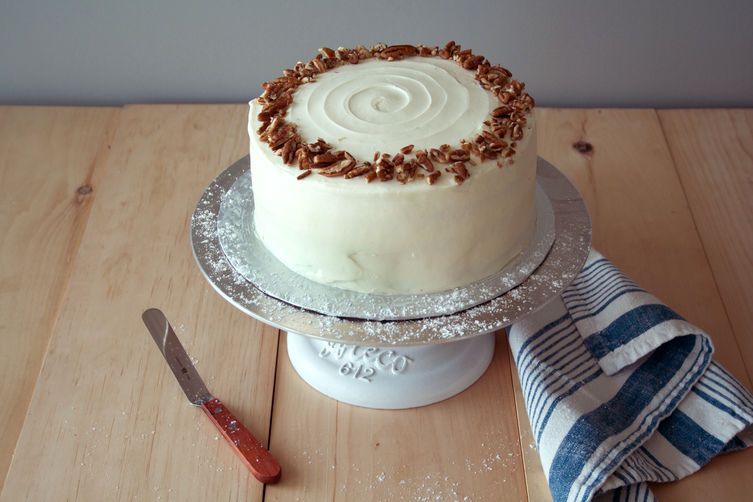 Frost cake as desired (I usually slice each cake in half length-wise, then frost each of the layers, then around the exterior) and enjoy!

ellie May 15, 2016
Hi, this looks amazing. I have to make one for about 50 people. I was wondering approx how many serves this cake makes for? Thanks! Ellie

LisaMarie A. June 19, 2015
If I were to use white sugar instead of raw would it be the same ratio?
Author Comment

Kim H. June 19, 2015
This is my favourite cake of all time..it actually originated in my Jamaica and was brought over to Charleston, SC....divine...I use whipped coconut cream for the icing with roasted coconut chips folded into it.

burning-ice June 19, 2015
How do you "crush" pineapple? Is this fresh pineapple, or from a can?
Author Comment

modest M. June 19, 2015
i use canned "crushed pineapple" as the level of sweetness is more consistent then a fresh pineapple!

FAV U. June 18, 2015
Fantastic recipe Double 'M'. The cake looks great in the pictures but would look better on my kitchen counter. :) Any plans to post a recipe for them cakes i.e. a VAN HALEN R/B/W Striped Cake?

Hannah P. June 17, 2015
This looks wonderful! Do you think I could get away with substituting the canola for melted butter or coconut or olive oil?
Author Comment

modest M. June 17, 2015
thank you! for sure you can. butter may not turn out as moist but it will still work and give it some butter flavour. if it's extra virgin olive oil i would say no, but regular olive oil is fine:)

Cynthia C. June 17, 2015
One of my all-time favorite cakes! This looks so incredible, Marcella!
Author Comment

Asa M. June 16, 2015
I love the idea of this being Carrot Cake 2.0 - I already love carrot cake. A cupcake place I loved in Seattle (Trophy Cupcakes) used to make a Hummingbird cupcake that was outstanding. I might give this recipe a try. However, this seems like a crazy amount of sugar - 2 1/4 cups in the cake and 3 cups in the frosting? I don't think I would use that much and would be tempted to halve it.
Author Comment