The Search for the Perfect Cocktail Cherry is Over

Marta's Erik Lombardo on why cocktail cherries are better preserved—but without the preservatives. 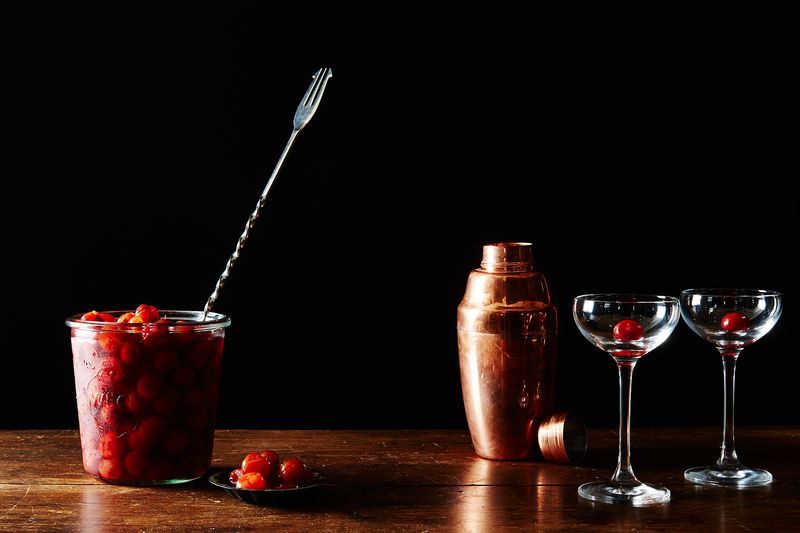 I still remember drinking my first cocktail. My family and I were at a Chinese restaurant in Brooklyn—the kind with pink tablecloths and gold plaster dragons with red lightbulb eyes on the walls—and the waiter brought over a Shirley Temple. That drink, that night, spurred a search for the perfect cocktail cherry. A search that spanned two decades.

Finding a recipe for homemade cocktail cherries can be rife with frustration and forced compromise. Those Day-Glo red bulbs, flawed in so many ways, have one major advantage over most methods for making your own cocktail cherries: texture.

Most recipes require heat, but heat plus cherries equals mush. Finding the right cherries also turns out to be difficult, as most cherries suitable for eating out of hand become uninspiring when brandied or candied. The key is to go back to cocktail cherries' roots.

Maraschino cherries were named after the Marasca, a type of Morello sour cherry grown in coastal Croatia. While this type of cherry isn’t readily available to most of us, the Montmorency sour cherry is. While bracingly tart when raw, they have inarguably the most intensely “cherry” flavor you’ll ever encounter when cooked. (And because of that, they make some of the best cherry pies, tarts, or tortes. If you can't find them, try whatever sour cherries you can get in their stead.) The cherries-heat-mush problem still remains, though, so the question becomes: How do you preserve them while infusing them with flavor? The answer is pickling.

More: How to pit cherries wihtout a cherry pitter. 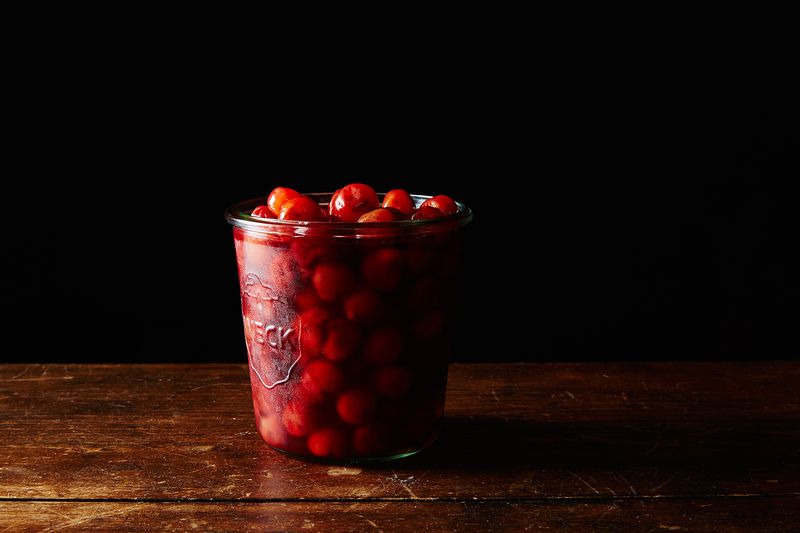 It may seem crazy, but pickling the cherries first not only preserves the fruit, but it also preserves its fantastic, crisp texture. But then you’re left with a bunch of already sour, now-vinegary fruit that even the most diehard pickle fans will hesitate to put in their Manhattan. The secret is to layer the drained, pickled cherries in sugar and let them candy. The sugar pulls the cherry-infused vinegar out of the cherries, preserving them while simultaneously making a rich syrup. This is a shrub—or a fruit-infused vinegar syrup—and shrubs can be used in cocktail recipes (replace regular sugar syrup with shrub) or added to seltzer water to make homemade sodas. It's a win-win.

The finished cocktail cherries are tart, sweet, and crunchy—and last damn near forever. While I'm not advocating nor condoning this, I’m just finishing a batch of cherries I made almost 4 years ago. I’ll often make a Manhattan just for the rye- and vermouth- soaked prizes (I always give myself 3—one as an appetizer, one as a main, and one for dessert).

As for the vinegar you drained off before layering the cherries in sugar: It’s incredible in salad dressing or agrodolce, officially making this a 3-for-1 recipe. And if you’re still reading this without a pint or two of sour cherries sitting in your fridge, stop what you’re doing and go buy them before they're gone for the season.

Jordan August 10, 2017
A little late to the game here, but would there be any issue with adding a bit of alcohol (i.e. bourbon or brandy) to the recipe? I expect I would do that once the sugar is mostly or completely dissolved.

Stephanie May 10, 2016
I made Cherry shrub last summer and found the cherries to be unbelievably tasty--I used them as a yogurt topping--when I strained the fruit. Thanks for the reminder, and the new uses!

Lindy August 12, 2015
Soak dried sweetened cherries in Luxardo. That is all. Best and easiest cocktail cherry, and I've tried a bunch of methods. These keep indefinitely in the fridge, and are never mushy/slimy.

dymnyno August 12, 2015
Yep. This is the best and easiest method. One bottle of Luxardo is a lifetime supply.

Barbara W. August 11, 2015
Best cherry cocktail, hands down, is Cherry Bounce. 1 cup pitted Montmorency (or other tart pie cherries), I cup granulated sugar, in a 1 qt mason jar. Shake to coat cherries, fill jar with sour mash bourbon. Let sit in the fridge for about 30 days, longer makes it better. Strain over ice. It's like biting into a cherry pie, but with a kick.

theone12 August 11, 2015
"Maraschino cherries were named after the Marasca, a type of Morello sour cherry grown in coastal Croatia. While this type of cherry isn’t readily available to most of us …"

Yes it is, it's called Luxardo Maraschino Cherry. Luxardo was founded in Croatia until Allied bombers destroyed their factory in WWII. They moved to Italy, bringing a few saplings with them, to where they're located today.

Also, their cherries don't use preservatives.

dymnyno August 10, 2015
You can also buy Luxardo and make your own cocktail cherries or buy a similar version from Dean and DeLucca. Sorry it took you so long.