Switchel: The Most Refreshing Drink No One Is Drinking (Yet)

Switchel is like cheater's lemonade—but maybe even better. Learn how to make it at home. 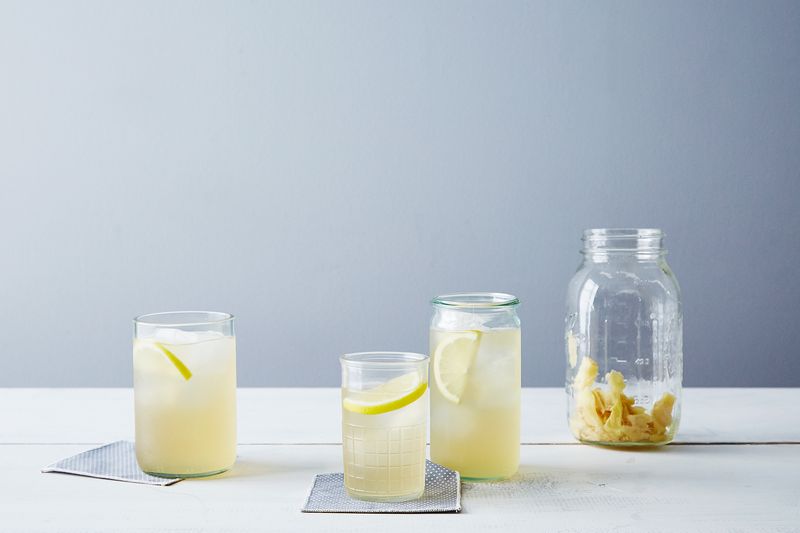 I had never heard of switchel when my friend Hannah asked if I would be her bar-back at last September’s Queen Bee Cocktail Classic, a honey-driven cocktail competition put together by NYC Honey Week.

The whole evening was both wacky and wonderful: There were tutus involved (not, I am happy to report, on my own body), there were lots of people buzzing around with drinks in their hands, and Hannah wore handmade paper flowers—complete with bees trembling on the ends of curled wires—in her hair. Bartenders from all over the city hoped their specialty cocktail of the evening would win them the title of Queen Bee. The only rule was that every drink had to include honey in some way. 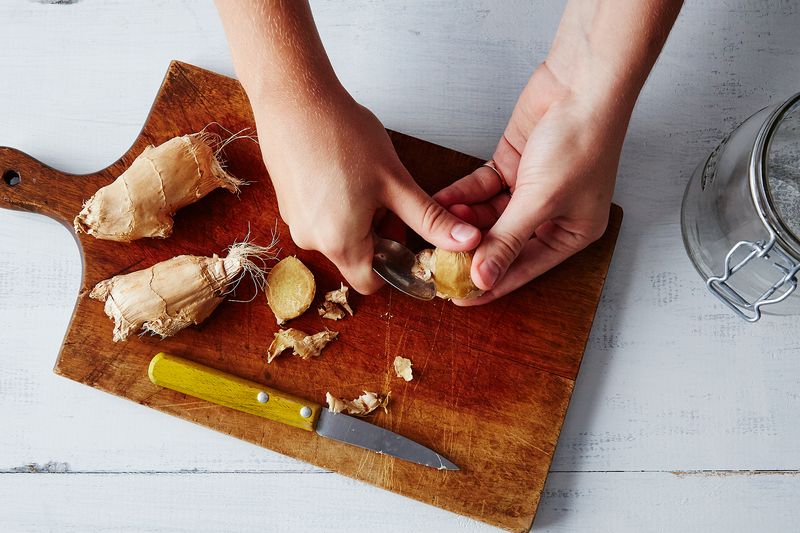 Hannah’s cocktail was a honey-whiskey switchel, a not-too-sweet highball topped off with seltzer water and a generous pinch of salt. She called it Haymakers Punch—"haymaker's punch" is a farmer nickname for switchel, because the stuff is so revitalizing when it's hot out—and it won her second place at the Classic. It also turned me on to switchel (which has since appeared on the shelves of the Whole Foods around the corner from the Food52 office).

Switchel is a tangy steeped brew of apple cider vinegar, ginger, and something sweet—Hannah makes hers with honey, but I like the rooty warmth of maple syrup. It is excellent as Hannah served it in her punch, with whiskey and seltzer water, but most of the time, I combine everything—vinegar, maple syrup, fresh ginger, and water—all at once in a big jar, screw on the lid, and shake until it’s all combined.

After an overnight steep in the refrigerator, I pour it over ice and drink. It is supremely refreshing, like lemonade but without having to squeeze all of the lemons. And it’s a much less austere way to get apple cider vinegar, which purportedly has about one million health benefits, into your system than a bracing shot of the stuff. 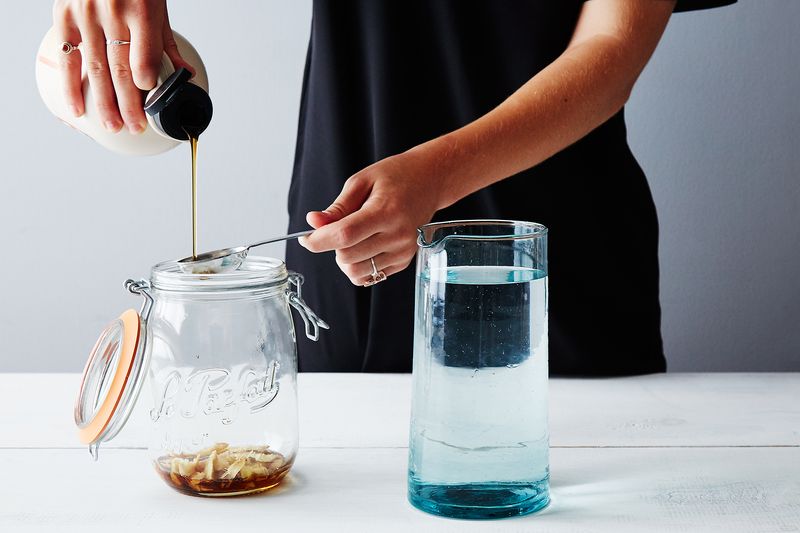 4 teaspoons apple cider vinegar (I like the unfiltered stuff, like Bragg's, best)
4 tablespoons pure maple syrup
Fresh ginger, peeled and thinly sliced (as much as you want—I usually slice up a piece the size of my thumb)
4 cups water 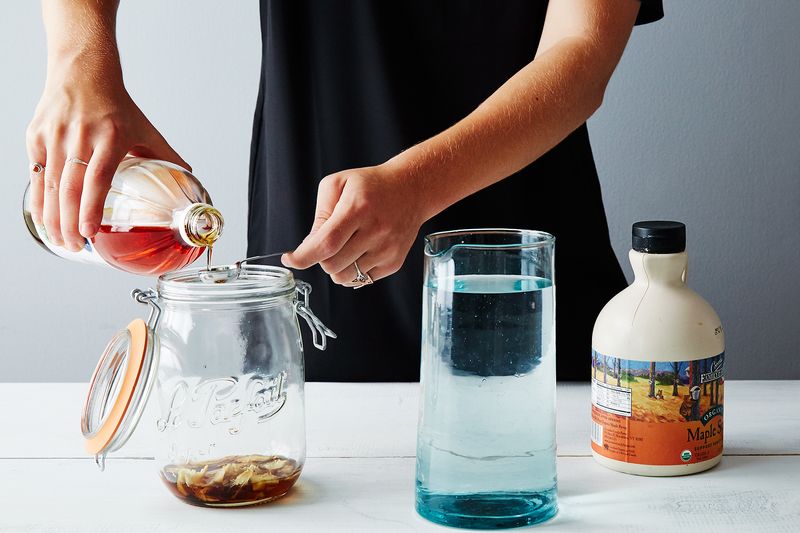 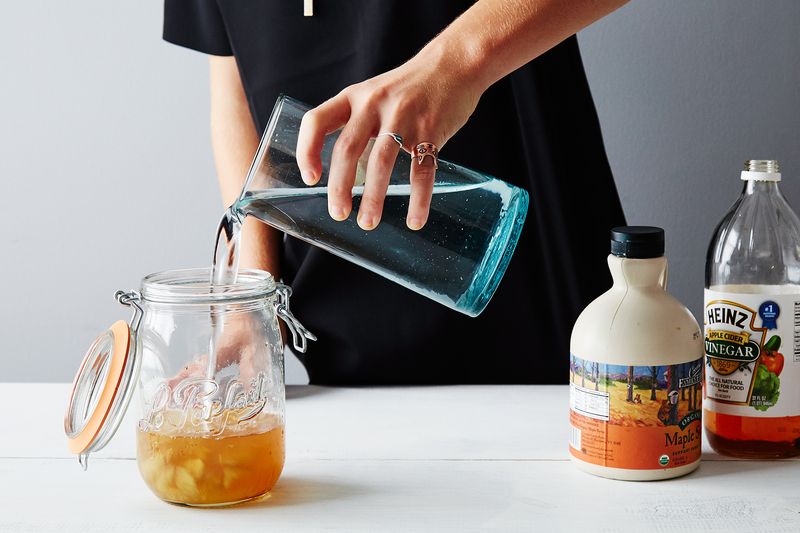 Combine all of the ingredients in a large jar. 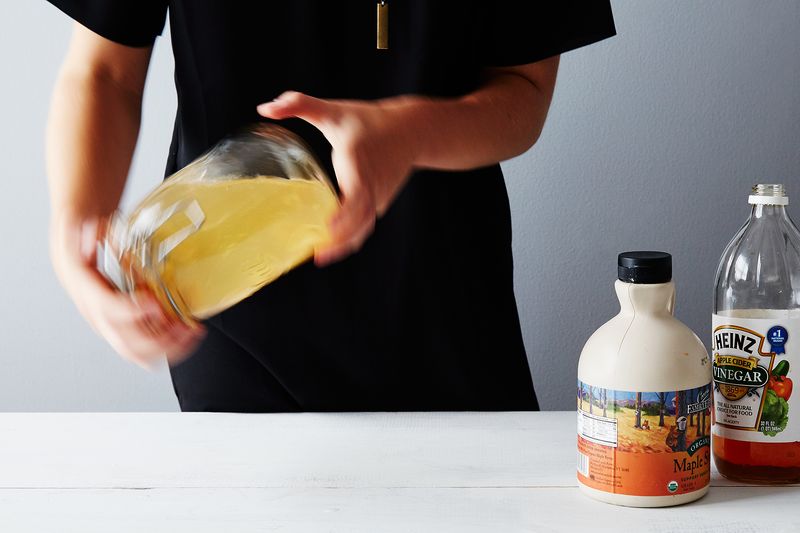 Shake to combine thoroughly, then refrigerate for at least 12 hours. 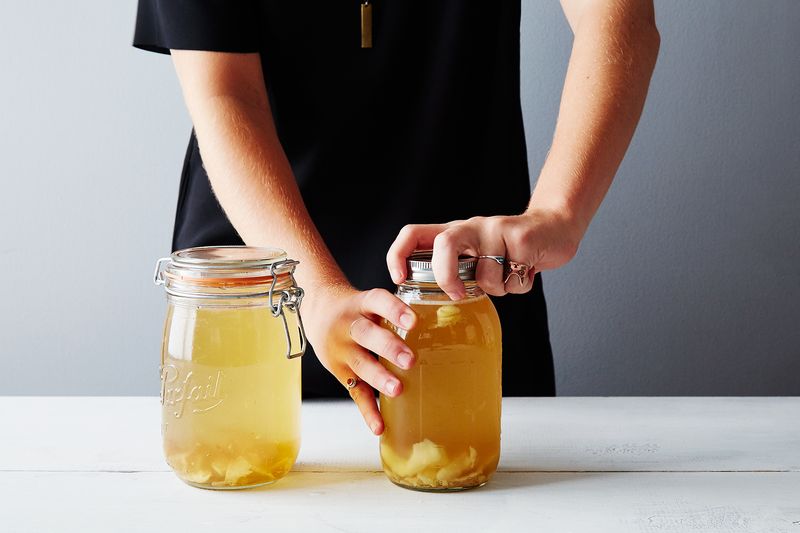 The switchel on the right has steeped for 24 hours—you can see how much darker it is! 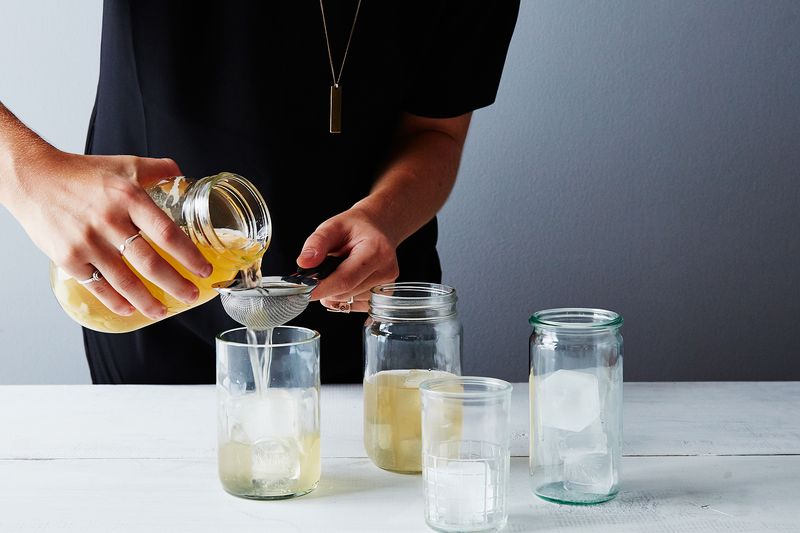 To serve, strain into glasses filled with ice—or heat it and drink as a tea.

Sabra August 10, 2018
Why is everyone carrying on about peeling ginger with a spoon? I never peel ginger anymore... Usually I grate it - the skins just disappear into the goo and therein lies so much of its flavor...

Lisa M. August 10, 2018
Because for me, I find peeling - with a spoon - and then finely dicing the ginger far easier and more productive than grating.

Laura415 June 11, 2016
Love Switchel. I made some fire cider this winter that I haven't used. It's mostly vinegar and ginger and chilies with some other slightly savory ingredients like horseradish (and garlic and onions if you like) The month long steep makes a great winter tonic. Might be good as a cocktail ingredient not unlike switchel. Looking forward to trying to make and use both.

Jeff H. June 3, 2016
The stuff is good. I do like you saying Braggs is best, but have Heinz in the picture, good chuckle at the stuff

Stephanie June 1, 2016
You can also skip the ginger and replace with a squeeze of any citrus (lemon, lime, grapefruit, OJ, etc). Each morning (I don't steep), I fill my big empty glass bottle with water + Dollop of ACV + squeeze of any citrus.
Rather than or in addition to ginger or citrus, you can also add a shot of tea...or lavender bitters...or lemon balm leaves...Super cheap and healthy and self-nurturing...Witch's brew!

byb May 10, 2016
I've made this a few times (and love it!) but have a question. I haven't really noticed my switchel darkening over the 24+ hours in the fridge and am wondering if I'm doing something wrong. What is causing the "steeping" that has darkened the switchel in the jar in the second photo from the bottom? Thanks!

Caroline L. May 10, 2016
Hi byb! I'm happy to hear you're liking it so much. I do generally notice the color depeen after a day or two's steep, but even without it, I don't think you're doing anything wrong! As long as it tastes good, I wouldn't worry.

byb May 13, 2016
Thanks, Caroline! Sounds good, glad I'm not missing anything. And again, thanks for sharing this, it's a constant presence in my fridge!

Sharon L. December 27, 2015
Please if you would tell me about the "peeling Ginger with a spoon" so I too will know how to do it when I make my Switchel???
Thanks for the recipe too, I am looking forward to trying it soon.

Caroline L. December 28, 2015
absolutely! all you do is scrape a spoon along a ginger root—it takes the peel right off. i hope you enjoy it!

Sharon L. December 29, 2015
Thank You Caroline Lange, for that info. I will give it a try when I make my Switchel.

Frederique M. October 7, 2015
That was a totally unnecessary comment. Don't you have anything better to do?

Frederique M. September 23, 2015
Sooo.. does it taste like ginger Kombucha? Cause I have a continuous brew of Kombucha, and make a 2F with ginger all the time, I will not attempt Switchel if it tastes the same thing !

Caroline L. September 23, 2015
no! it's not quite as fermented-tasting as kombucha, though it does share a similar vinegary tang. it's also not carbonated.

Frederique M. September 23, 2015
Think I could switch up (haha) The ACV in the recipe for my homemade blueberry Kombucha vinegar?

Lisa M. September 17, 2015
This stuff is the BOMB. It was a life-saver as recently my husband had to endure a clear liquid diet for two straight days. So much better than that Gatorade swill. Next time, I might add a touch of cayenne as well. And everyone knows about peeling the ginger with a spoon, right?

Caroline L. September 17, 2015
this makes me so happy to read. i'm glad you liked it! and YES, peeling ginger with a spoon is probably one of the best tricks i was ever taught.

jamie B. September 15, 2015
I love this recipe. I've experimented around with it a bit - since I like ginger, I add significantly more ginger (about two thumb lengths) and, since I like sparkling water, I make this double strength - 1 1/2 cups of water v. 4 - and top off my pour with sparkling water

Caroline L. September 17, 2015
thanks for these tips!! i've also heard that grating the ginger makes the drink more gingery (and some folks make it with powdered ginger!). if you try either, let me know :)

Maureen September 5, 2015
If it will keep 'about a week' in the refrigerator, could one continue to top off the vinegar and honey portion as the jar is drained, allowing the ginger to continue steeping?

Caroline L. September 8, 2015
that's a good question, maureen. i've not tried it, though i imagine it would work just fine. let me know if you give it a go!

Cinnamon September 5, 2015
The ginger drink I make is so much more work than this, and I spend most of the year just talking myself into the ordeal. I cn't wait to try this certainly tasty substitute, thank you!

Dagny H. September 3, 2015
A few months back I discovered that the liquid from homemade sweet pickled ginger was delicious mixed with sparkling water. Now I know there's a name for it! Can't wait to try this with the cider vinegar and an apple cider reduction as sweetener.

jessica September 2, 2015
sounds great. something to add to the repertoire besides making cocktails with Shrubs - a mix of drained juice from ripe fruit and sugar mixed with vinegar

Niknud September 1, 2015
This is delicous! I made up a batch using honey instead of syrup and it is just wonderful. What a great drink - thanks for sharing!

42potatoes August 31, 2015
Ha! Was sipping switchel while checking email with this article! It's great stuff. Thanks for the recipe!

Jim S. August 31, 2015
I've been doing the "eat a chunk of ginger and chase it with a spoonful of cider vinegar" thing for years, especially to settle the stomach. This tastes wonderful while doing the same job -- plus it doesn't feel so medicinal. Thanks! (and Sarah Jampel -- I'm with you on the cheating on kombucha. This is much easier to make...)

Lee A. August 30, 2015
Switchel has been around for centuries. If you ever read the Little House books - Laura helping Pa with the haying, and Ma making them a surprise drink of ginger, vinegar, and sugar mixed with water - that's switchel.

Kt4 August 26, 2015
I've been making a ginger-vinegar tea very similar to this for years when anyone has a cold... About 1Tb fresh minced ginger steeped in hot water for 5-10 minutes then add 1Tb acv and sweeten with honey to taste... It looks like the only thing keeping it from being a "Switchel" is not sitting in the fridge for 12 hours :-?

Caroline L. August 31, 2015
yes! very similar. you can actually drink switchel hot, too! the overnight in the fridge does the same work that steeping the ginger, vinegar, and honey in hot water does.