Inspired by Comté's ancient production methods and its varied cheesemakers, we set out to learn more about the world of cheese and recipes to use it in.

Today, the gals behind Campbell Cheese and Grocery in Brooklyn tell us why we should forget the wine and keep floss around (and share a grilled cheese recipe!). 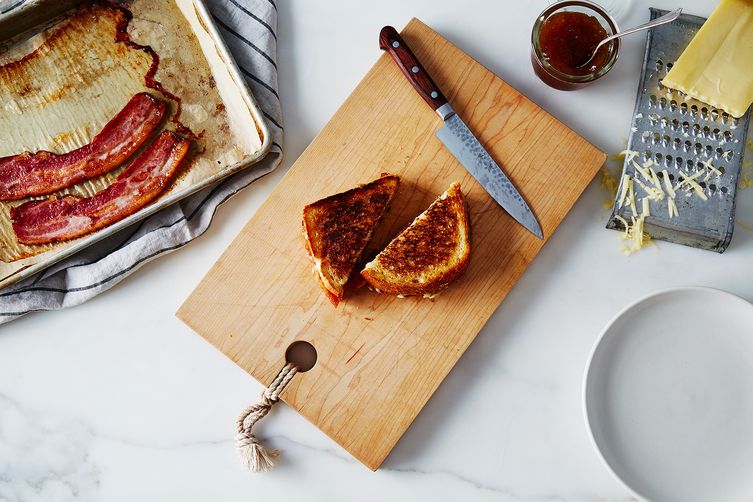 What's the best way to get the perfect slice of cheese? And what's the best way to go about buying the right cheese? When I went to Campbell Cheese and Grocery in Williamsburg, Brooklyn, to ask about it, I got answers to a whole lot more about the cheese world than I had anticipated: They go to cheesemonger invitationals (“kind of like the monger Olympics”), one of their distributors bikes over samples when needed, they know their customers intimately: Cheese is more than work to the mongers at Campbell Cheese and Grocery; it’s a way of life. There's no one better to give me lessons in trusting my cheesemonger. 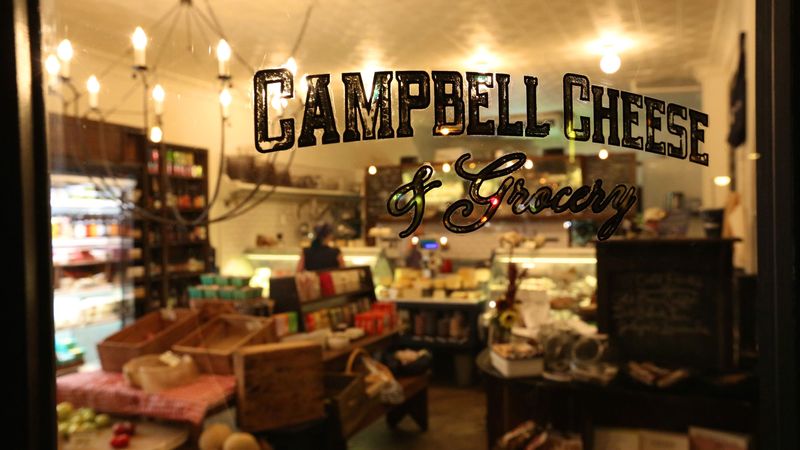 Alana Campbell greets me at the door of Campbell Cheese and Grocery with a big smile and a mop-haired little girl in tow (her daughter Alona Jane), an act that feels distinctly of another generation—one in which a bell jangles as you open the door of the shop, you’re greeted by name, and are immediately offered a sliver of something savory, as though you’ve been walking along for miles and are in need of some sustenance and a simple stroke of kindness to perk you back up. 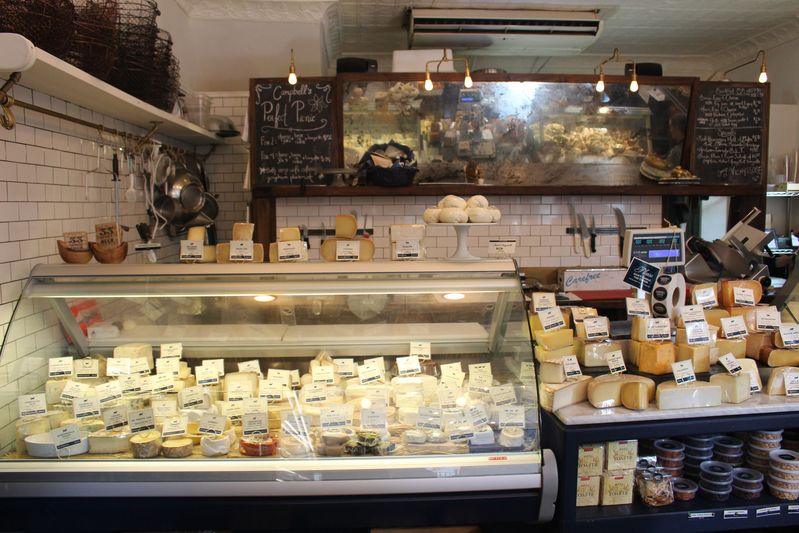 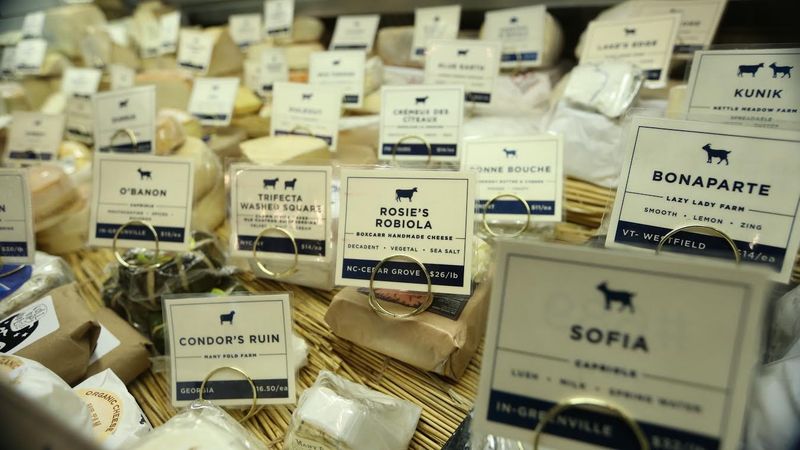 The cheese case at Campbell Cheese and Grocery.

The wonderful thing is that this is exactly what happens, and it works. It's not forced—it does feel like you’ve been in need of these things, even if instead of arriving by car or foot you've popped up off the subway after work, or are on your way to the park by bicycle. The click-clack of shoes on the floor is comforting, and produce, honey, and loaves of bread stick out from every angle and shelf—and then there’s the cheese case. Packed to the gills with everything from soft to hard and cow to goat, it’s clearly the central focus of the shop. 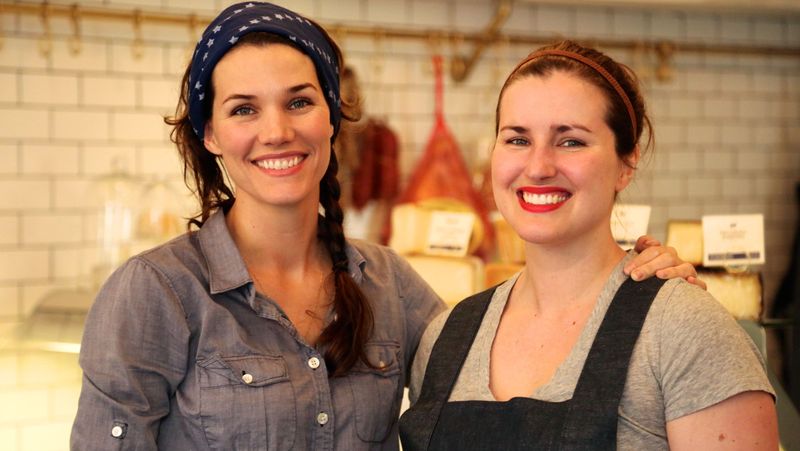 There is a healthy bustle even when the store is near empty, and maybe that’s thanks to the energy Alana, her sister Erin (who she runs Campbell’s with), and their head cheesemonger Carly Goodspeed emanate as they talk animately, passionately about cheese. And that's because it's in their blood: Alana and Erin's family owned a general store at the turn of the century on the Florida-Alabama border in, and have lived on the same block in Williamsburg, Brooklyn—the same block that the grocery is on—for 16 years. They’ve watched the corner spot turn over year after year. As they watched the neighborhood change, they realized that a corner cheese and grocery shop was just the thing their community needed, and finally snatched up the space the the last time it went up for rent (that was in 2013). And when they opened, they wanted to make sure they kept their general store roots, and values, intact. 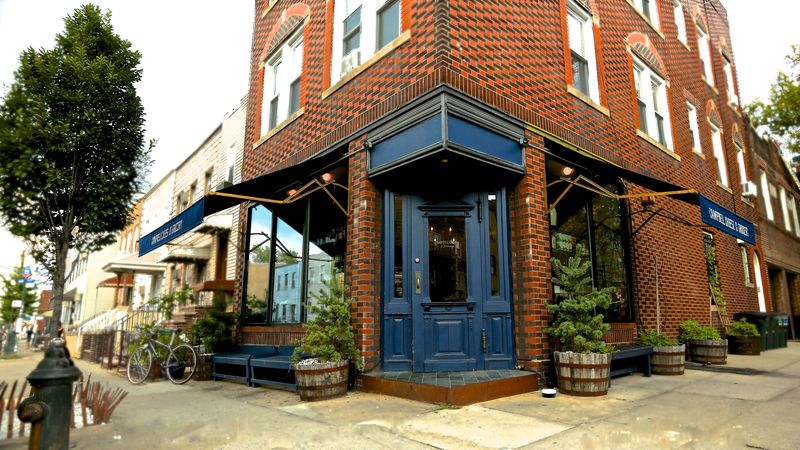 “It’s important to us that, like everything else in the shop, we make cheese accessible. We never want anyone to be intimidated by cheese,” Alana notes. And to Alana, Erin, and their staff, running their shop is more than just about cheese-slinging: They liken it more to storytelling and connection. (It’s kind of in their blood: Alana is a former documentary filmmaker; Carly, a seasoned butcher and baker, enjoys reading people for their choices, like a bartender.) For one thing, they’re very selective of the cheeses they bring in and the distributors they work with, so they trust that every wheel they order has a special history. "There’s a lot of creativity in cheese—knowing where the animals are from, where the milk is coming from, what they’re eating, their stories," Carly says. "I really love the journey because it takes this tiny little thing and just expands it's story."

And so when we visited them, we asked for the full story: What are the secrets that cheesemongers have for being better at the cheese game? Campbell Cheese and Grocery then shared six tips for knowing, serving, and loving cheese just a little bit better: 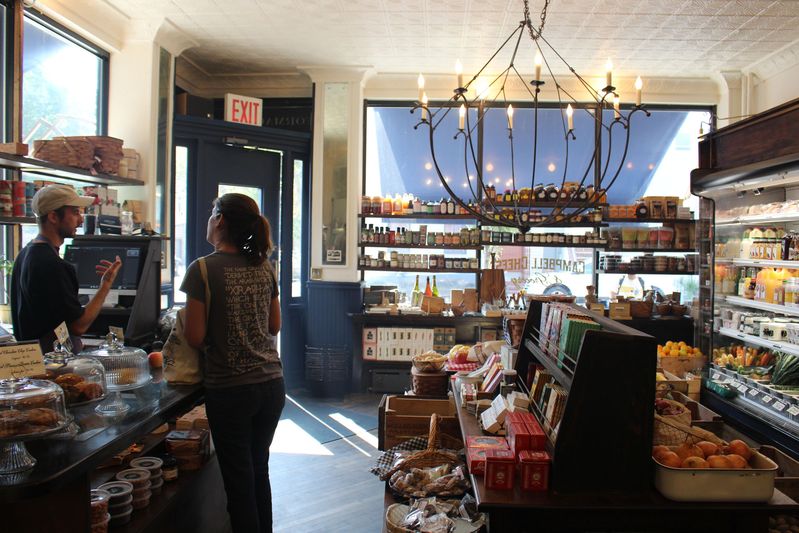 1. If you don’t know something, don’t buy in the dark: Always ask your monger.

This might seem obvious, but think of a cheesemonger as your cheese sherpa—if you’ve been assigned a good one, they are there and willing to guide you to a cheese revelation.

Alana says that before she knew anything about cheese, walking into a cheese shop was overwhelming. “I didn’t know where to start. But as soon as I learned the most basic categories of cheese, it began to make sense.“ She says that most cheese cases are organized by four simple distinctions: soft, hard, washed rind (aka stinky!), and blue.

Your cheesemonger is willing to answer the tough questions—cow, goat, or sheep? What’s best for a cocktail party? Barnyard stinky or something that smells more like spring water?—but they’ll also answer the questions you're not sure of, the ones you might try to whisper and then say “Nevermind!” before going with a cheese you know you’ve had.

Carly says one such question like this is often, "Can I eat the rind?" “Most of the time the answer is yes!” she tells me. “It might even be intended as an integral part of the cheese. The only ones you shouldn’t eat are the ones made of wax. But the truth is, if you don’t like it, don’t eat it.” Other questions like "How do I cook with cheese?" also come up, and they say it really depends on what you are cooking. If you are looking for something to cook with, like in in their fig and bacon grilled cheese, look for a mountain cheese, like Comté. Generally more moisture and more fat equals a good melt. Something spreadable for raw vegetables? A young goat cheese might do the trick. 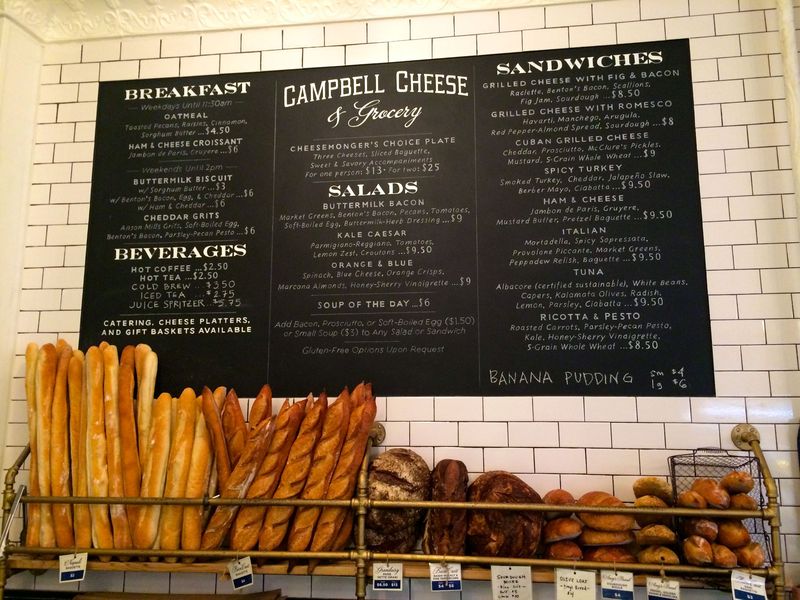 2. Room temp is the right temp to serve cheese.

This is key, according to Alana and Carly. You'll actually be able to taste the intended flavors of the cheeses when you serve them at room temperature, and it will also have had a chance to breathe (this pertains to storage—more detail here).

“Make sure you take it out of the fridge in advance (of eating or for a party) and let it warm up to cool room temperature,” Alana says. She also notes that you’ll want to make sure not to let it get too hot, or the cheese will sweat and melt (cheese, just like us!). 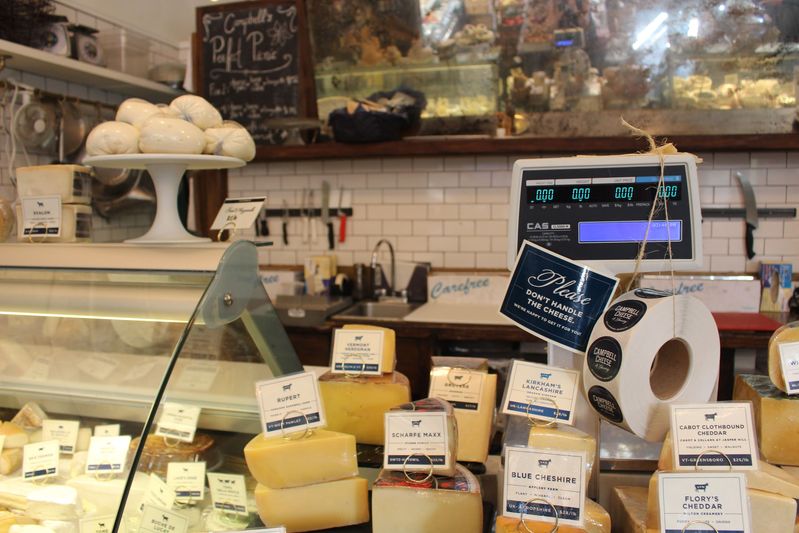 “Facing” a cheese is monger-talk for taking off a thin portion of the cheese that’s been exposed to the elements before eating it. In most cases, Alana says, you can just scrape the surface; in other instances, it requires more of a thin slice. It’s extra important at the counter—the practice exponentially reduces a bad experience with a cheese. This is also why cheesemongers get really excited when they get to taste cheese from a freshly-opened wheel, with no facing required. “Every time we open a wheel, we slice off tastes of the cheese for all our staff to try. It’s a treat!” 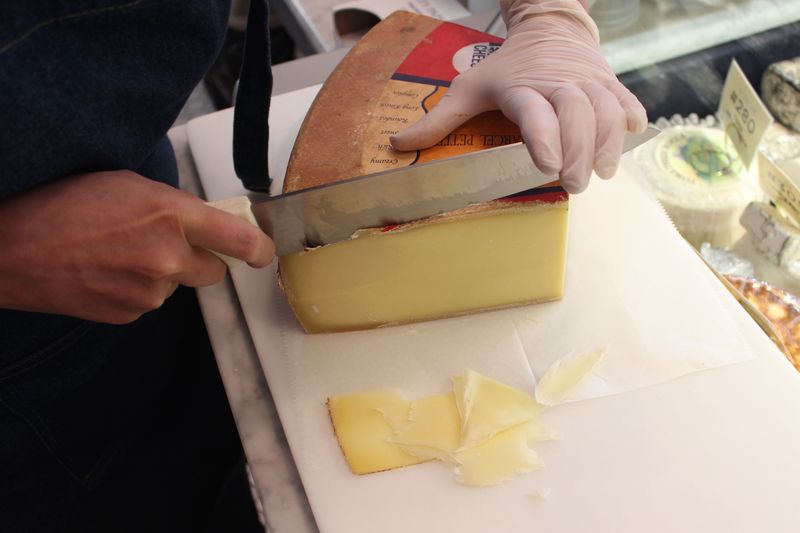 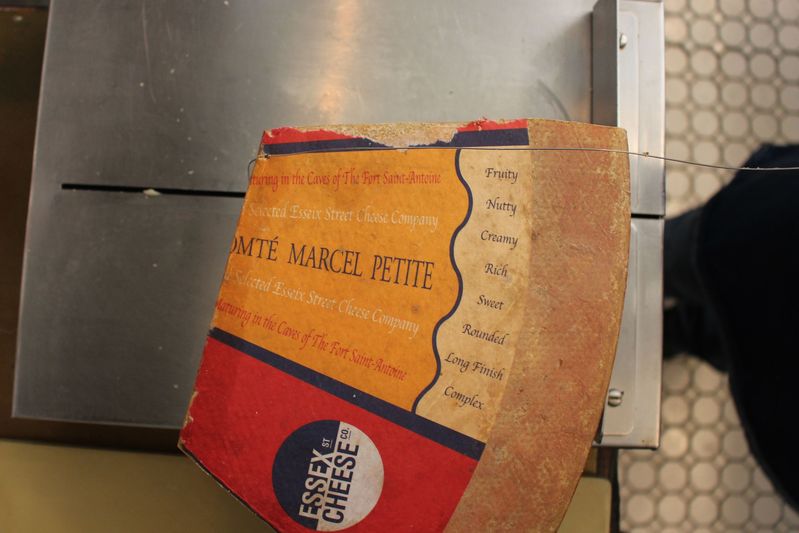 On the left, Head Cheesemonger Carly Goodspeed shows us how to "face" a wheel of Comté, and then how to slice it with a cheese wire, right.

4. Drop the knives—use a cheese wire instead.

Remember those cheese slicers from childhood, where a thin metal wire was attached to a slingshot-shaped handle? I do, and I loved dragging it through a block of cheddar. The slices it produced were so perfectly even, never ragged. Turns out it’s not a weird inessential tool—it’s the best way to slice just about any cheese.

“Cheese wires decrease the amount of surface area that comes into contact with a cheese, so you’re able to make a clean cut without losing a ton of it to your knife,: Alana notes.

And if you’re in a pinch and don’t have a cheese wire, she mentions, the answer is in your medicine cabinet. For softer cheeses, you can use dental floss instead—just don’t grab a mint-flavored version!

5. A rule of thumb for pairing among mongers: Beer is always better.

Surprise! To cheesemongers, wine is not the ultimate pairing for cheese—beer is. Alanna says that trying to figure out a good alcohol/cheese pairing is something that stresses customers (and even new cheesemongers) out. Alana notes that the bubbles cut the fat of cheese, so the next time you are picking up a hunk of something, try toting with it a big bottle of beer to the party instead of wine. 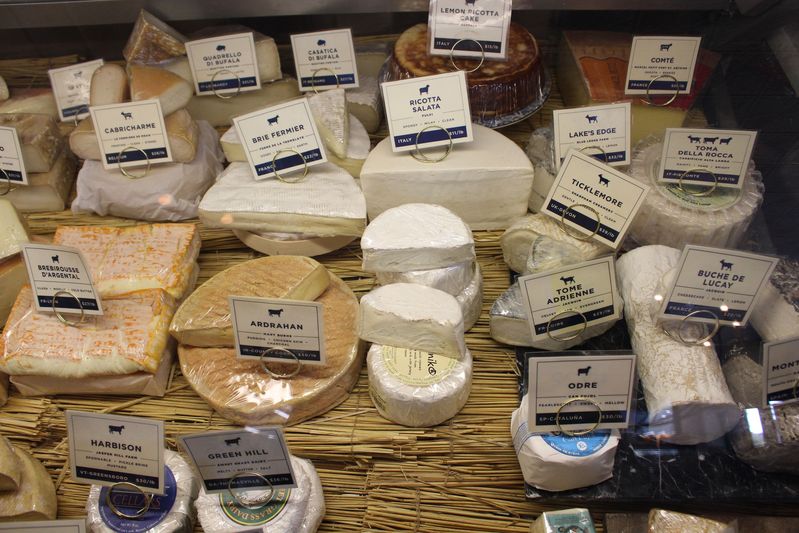 An array of cheeses in the Campbell Cheese and Grocery case.

6. Cheese is a living thing. Store it like one.

Every morning, when Carly arrives at the shop, she’ll set about doing a few morning chores—most notably, finishing up making their fresh mozzarella and doing some cheese maintenance. “We are constantly unwrapping and rewrapping the cheese so it gets a little air,” she says. Alana adds that ideally, customers should wrap cheese in the porous cheese paper you get from your cheesemonger. But if you don’t have that handy, the next best thing is to wrap your cheese in wax paper and keep it inside a plastic bag. “Either way, store it in the warmest spot in your fridge, like the cheese/meat drawer or the vegetable crisper,” she says.

Inspired by Comté's ancient production methods and its varied cheesemakers, we set out to learn more about the world of cheese and recipes to use it in—like this fig and bacon grilled cheese.

We're going behind counters, bars, and "Staff Only" doors to ask shopkeepers, vendors, artisans, service workers, and more to learn what it's like to work where they work and do what they do. Want us to find out more about what your local artisans are getting up to? Email us at [email protected]

Annie September 29, 2015
I love love LOVE this cheese shop! It's fortunately right around the corner from my BF's place, so I always try to stop by and pick something up/plan dinners around cheese just as an excuse to go here. The people behind the counter are so helpful and pleasant - fantastic shop.