What Exactly Is a Gratin? 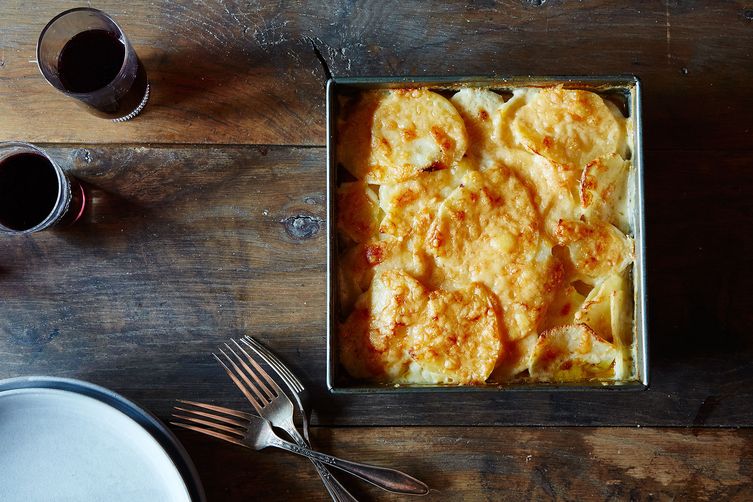 Yesterday, an urgent-sounding email from a friend pinged into my inbox: “A favor,” read the subject line, followed by, “I don’t understand gratin.” And then I realized that, darn it, I didn’t either.

Our trusty copy of the Food Lover's Companion told me that a gratin—sometimes written as gratinée or au gratin—is a very flexible dish; no wonder we weren’t quite sure how to classify it. But, the book said, they’re always baked in a shallow dish (sometimes called a “gratin dish”) and always topped with something that will crisp up when the dish goes into a hot oven or under a broiler, like cheese or buttery breadcrumbs. So here’s what we know:

The best known gratin dish is potatoes gratin (sometimes called pommes dauphinoises), and for good reason: Bake layers of sliced potatoes in a dish, top with grated cheese, buttered breadcrumbs, or both, and slide it under the broiler for a final scorch. You get the creamy potatoes, gooey cheese, and the crunchy breadcrumbs. It’s as good as it gets.

But what else can you make into a gratin? It turns out we make a lot of gratins without realizing they’re gratins. 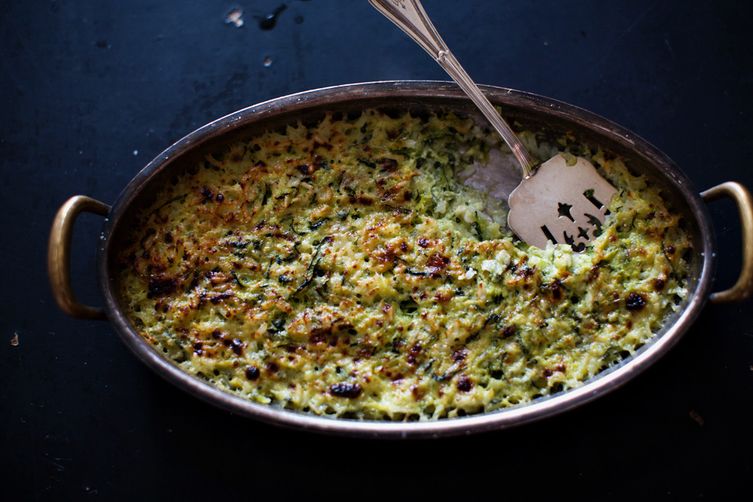 There's Julia Child’s very Genius rice-and-zucchini gratin, which, in Mastering the Art of French Cooking, Volume II, hides under the name “Tian de Courgettes au Riz.” It has at least as much zucchini as rice in it and is topped with a crispy, crispy layer of Parmesan cheese. And many tians are gratins! The Food Lover's Companion says as much: Tians usually composed of thinly sliced and layered vegetables, baked in a shallow dish, and topped with cheese and/or breadcrumbs (just like a gratin!).

Even macaroni and cheese is also a sort of gratin when topped with breadcrumbs (the best part!). Go ahead and call it pâte au fromage gratiné. If you want.

What else can you make au gratin? Just about everything (we're lookin' at you, leftovers), and they can go heavy and hearty (i.e. cream-filled and cheesy) or lighter, with just toasty breadcrumbs on top. 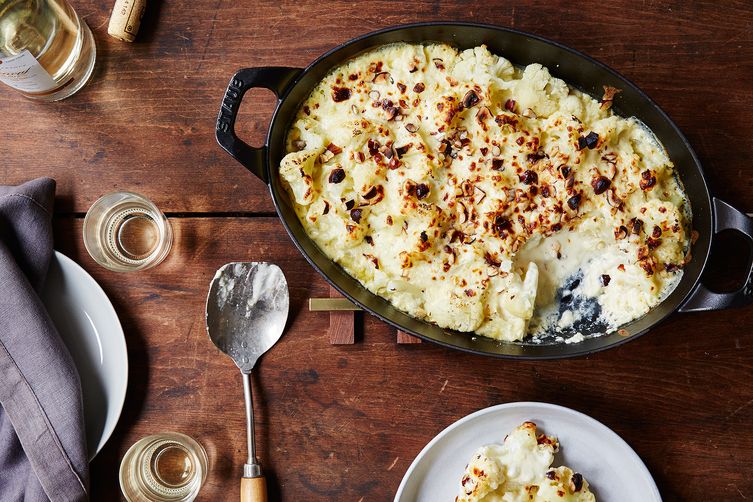 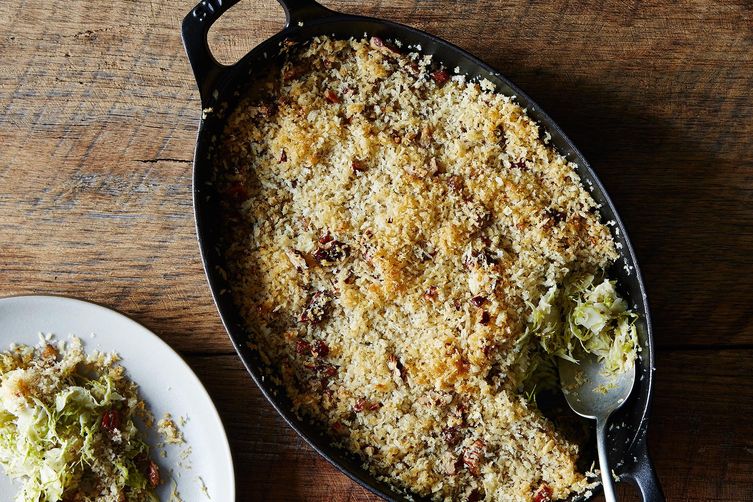 While hard vegetables like potatoes, cauliflower, and squash are the most common and the most traditional, there are chicken gratins and seafood gratins, pasta and rice gratins, and gratins made with softer vegetables like tomatoes, eggplant, or zucchini—or leafy greens, like kale, chard, and spinach. Sweet gratins don’t seem to have caught on yet—at least not in the same format as their savory cousins (though oat-topped crisps are pretty close). But if you try one—think sliced apples or pears (or sweet potatoes!) with a cinnamon sugar-breadcrumb topping—let us know. It'd be awfully good with a scoop of vanilla ice cream...

Photo of potato gratin by James Ransom; photo of tian by Karen Mordechai; photos of cauliflower and Brussels sprouts gratins by Bobbi Lin

702551 September 23, 2015
Actually dessert gratins litter French cookbooks. As Donna mentioned, they are typically some sort of fruit covered with sabayon.

The old-school way was to hold a hot metal plate above the item to brown it. The typical commercial restaurant will use a salamander, a gas powered broiler. You can use a propane kitchen torch, but typically they aren't powerful enough or terribly efficient in heating up the contents of the dish.

For savory dishes, there are two basic ways of making gratin.

The first one is to cook something (often raw) in cream/milk for a long them and the long baking time helps form the golden crust. Gratin dauphinoise is the classic example of this. You don't actually need cheese nor breadcrumbs for gratin dauphinoise; it will brown on its own.

The other way is to cover parcooked or fully cooked items with a premade cream/milk based sauce, basically cooking the primary ingredients and the dairy-based sauce separately, then combining for the final gratin browning. The classic French sauce used for this is sauce béchamel. This works better for situations when the sauce and primary ingredients have different cooking times (like a cauliflower gratin). One classic made this way is lobster thermidor. Cooking the lobster with a cream/milk-based sauce would overcook the lobster and erase much of the fresh lobster qualities. Hence, the lobster is cooked separately, slathered with the white sauce, then broiled quickly. This avoids overcooking the lobster while having the nice golden crust.

The fruit gratin is basically the latter method: having a ready-to-eat primary ingredient covered with a finished sauce (sabayon), then broiling quickly to obtain the golden crust. In a restaurant salamander or broiler, this probably takes less than 2 minutes.