A Savory Apple Flatbread, for When You're Full of Pie 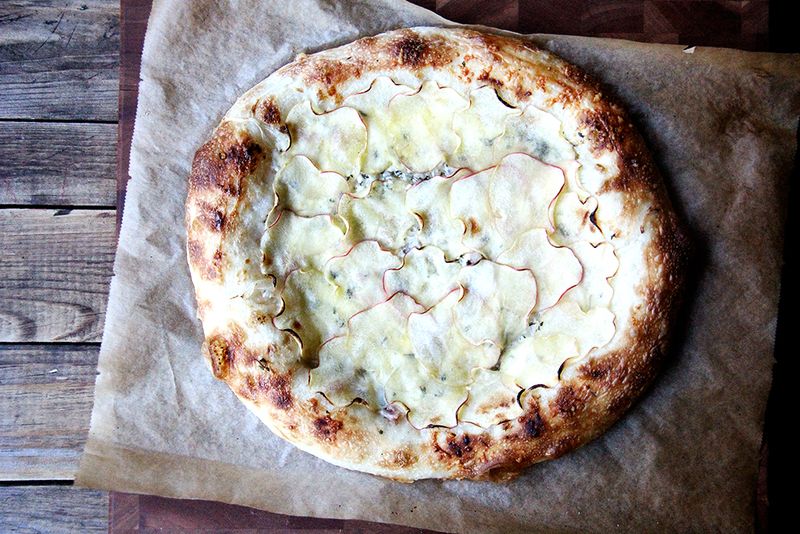 Every fall I look forward to the re-opening of the local orchards and country shops selling seasonal treats. I recently made a run to my favorite spot, Riverview Orchards, and chatted with the owner, Isabel Prescott, who reminded me how fleeting this season is: Only one month remains for apple picking! Over hot cider and apple cider doughnuts, Isabel shared some of her best apple know-how: 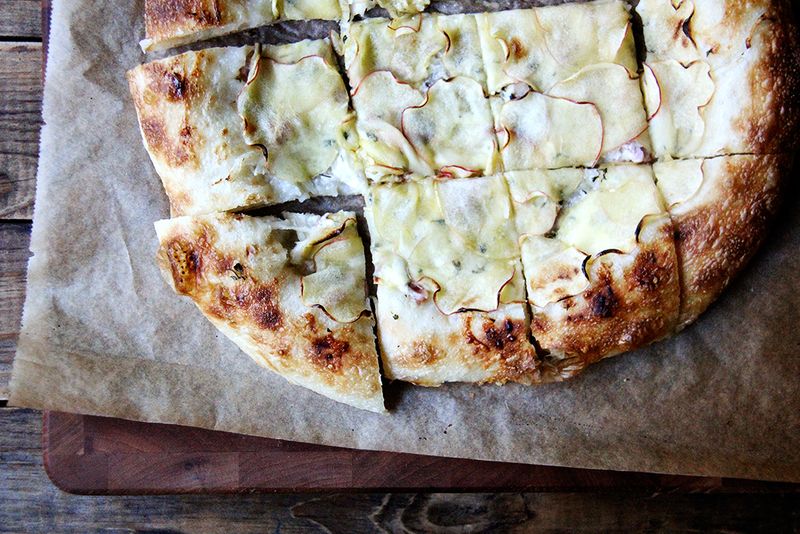 Most of the apples in my kitchen find their way into pies, butters, and sauces. But recently, while flipping through Dorie Greenspan's Baking Chez Moi, I happened upon a striking image: a blistered flatbread topped with layers of glistening, whisper-thin apple slices. Extreme wanderlust is a sensation I’ve come to expect when perusing any of Greenspan's books, but never have I felt more moved to pack my bags. 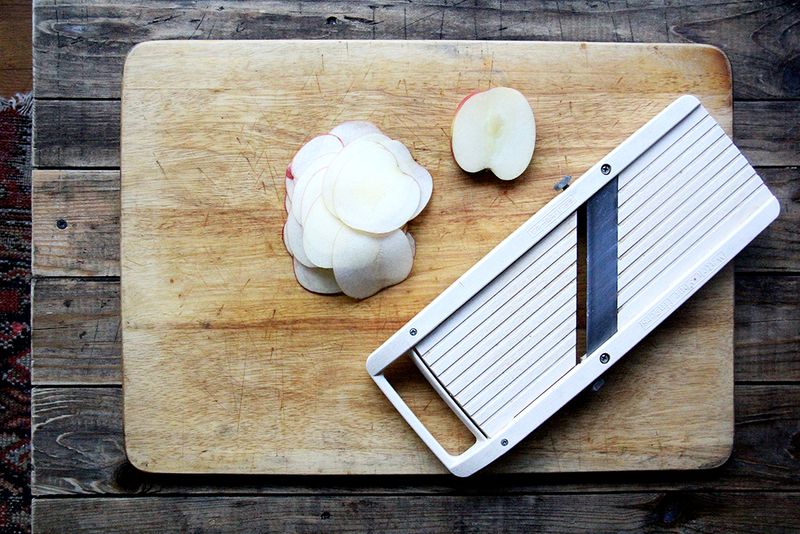 I turned the page and read the inspiration behind the recipe, the tarte flambée at Flamme & Co, a restaurant in Alsace that bakes the regional specialty in ferociously hot wood-burning ovens. Classically, tarte flambée is made with fresh cheeses, cured meat, and raw onions, but Flamme & Co serves both sweet and savory versions. 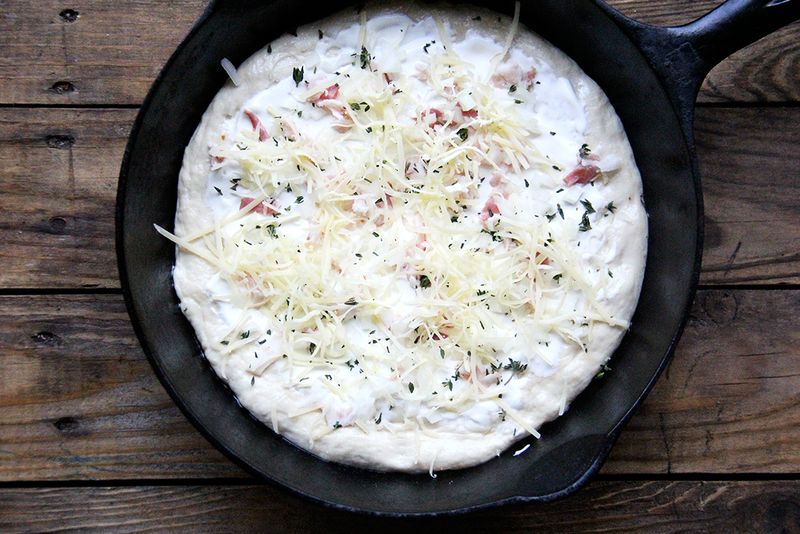 Greenspan’s passage sent me on an Alsatian pizza making bender. I soon discovered that the union of tangy crème fraîche, sweet onion, and smoky bacon needs nothing more.

But the combination lends itself to countless variations: mustard greens, crisped and charred, provide spicy contrast to the creamy crème fraîche; delicata squash slices, briefly blanched, melt into the dough, their sweetness offsetting the bacon’s saltiness; apples, sliced on a mandoline, soften in a screaming hot oven and emerge with edges ruffled like campanelle pasta. 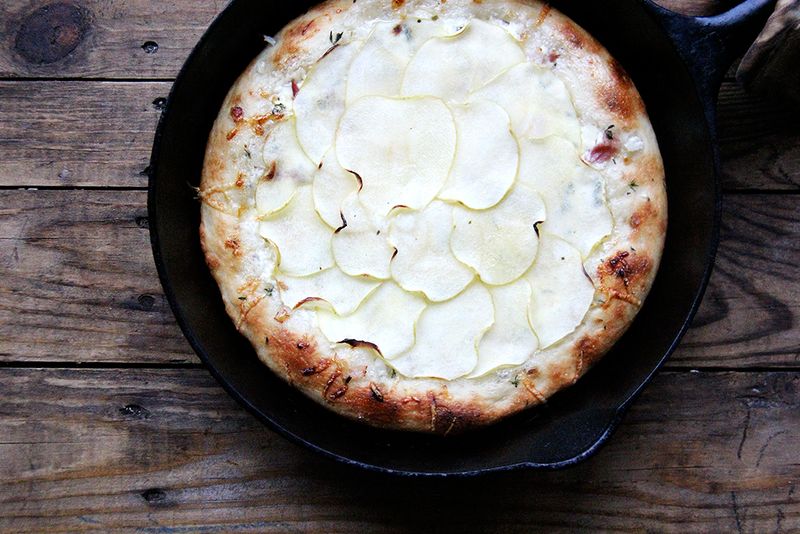 I'll still make pies and cakes this apple season, but this savory use has proven to be a welcomed addition to the fall dinner rotation. And, more importantly, it has subdued my longing to move to eastern France—for now, that is. 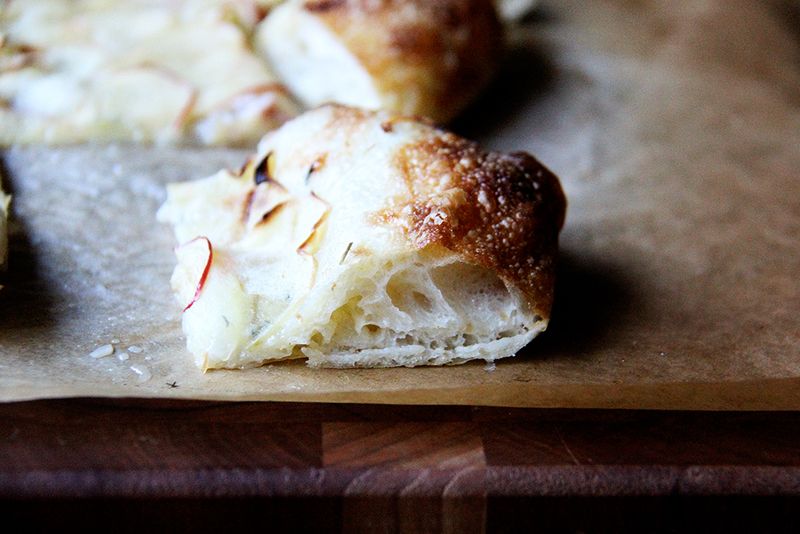 Wolfette May 5, 2017
Such a nice surprise to see a mention of a restaurant in my beloved city of Strasbourg on Food52! I'm happy you liked Alsace Alexandra, it truly is a beautiful place with simple, delicious food. I'll try this recipe next week, it sounds delicious! Apple a commonly used on tarte flambee with cinammon and sugar and eaten as desert, but I've never tried it the savory way. I have a nice chunck of Beaufort cheese in the fridge that should do the trick.
Author Comment

Alexandra S. May 6, 2017
Oh Wolfette, I wish I could say I've been to Alsace, but alas I have not! I would love to visit. The sweet tart flambée sounds lovely!