Posie Harwood, who finds the best back-of-the-box recipes in the grocery store, takes classic cinnamon rolls up a notch with whiskey salted caramel. 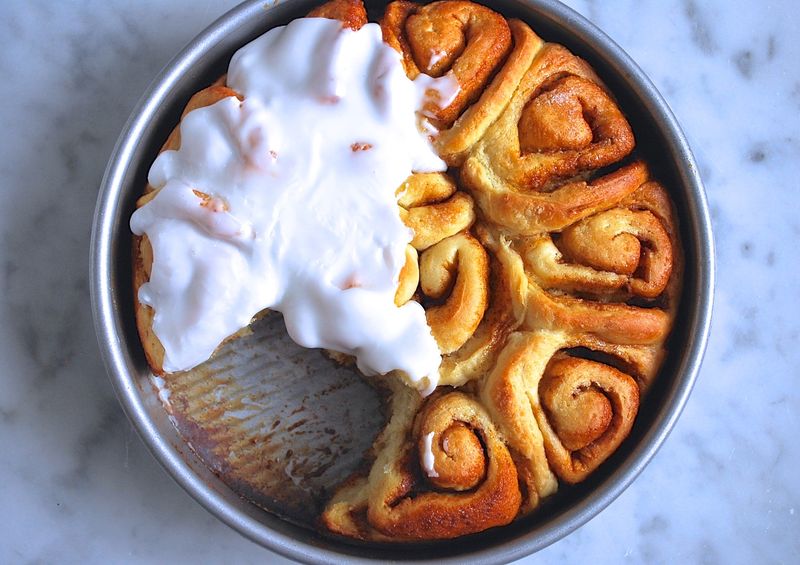 I was at the airport early last weekend. I was headed to Florida for a wedding and I was hungry and in need of caffeine. Despite the recent arrival of some good sit-down restaurants, New York City airports fail miserably in the food department. In search of a decent bite, I wandered the terminal, passing display cases of limp pastries and shelves stacked with chips.

But then—what's that?—the siren call of airport cinnamon rolls. Wafting down the corridor, the aroma of those cinnamon rolls is unlike any other. Like the fifth cocktail on a Friday night, you know they're a bad decision. It's 7 A.M. and you need real breakfast, not a puffed-up sugar bomb masquerading as sustenance. 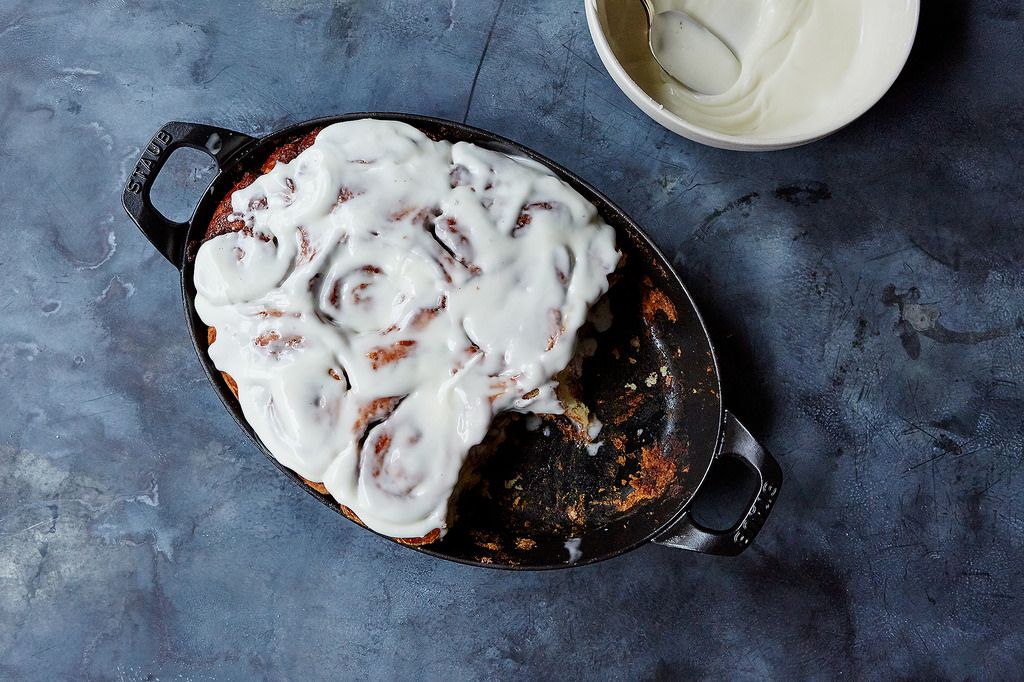 Regardless, I had cinnamon rolls on my mind the entire flight. Truthfully, I don't like how many bakeries these days consider size to be the ultimate expression of decadence: They think the bigger and doughier the cinnamon roll, the better.

I prefer a cinnamon roll made from a thinner dough. Rolling the dough more thinly allows the sugary, spiced filling to soak further into the tightly wound coils, which creates a sticky, chewy center. And after all, the center bite is the best bite.

I started thinking about other ways to up the intensity of a cinnamon roll. Naturally, I thought about whiskey (isn't that the solution to many problems?). I made a very simple salted caramel sauce and added whiskey at the end, though not enough to overpower the sauce. If you love whiskey I'd suggest adding more than I did, and tasting until you're happy with the flavor. 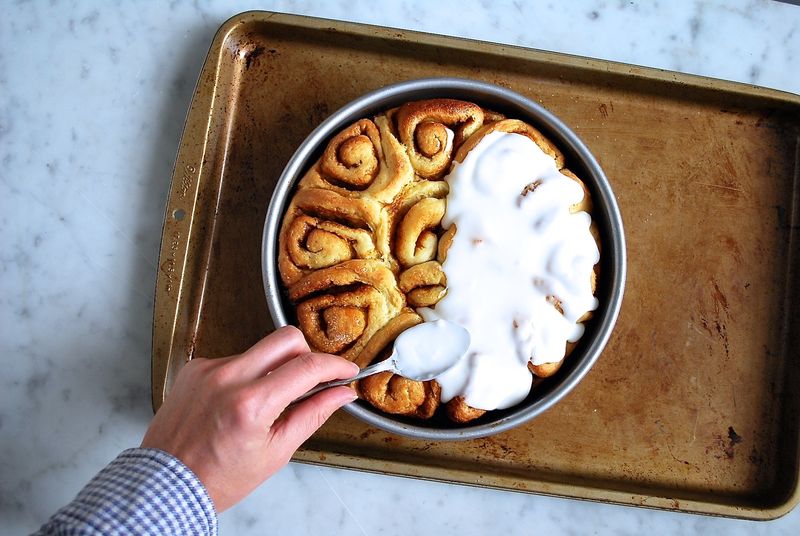 This recipe is a very basic dough, which comes from the back of the Domino brown sugar box. I've tinkered with the filling slightly, spreading softened butter over the dough before adding the cinnamon sugar in order to help the filling to stick better.

The salted caramel sauce goes on last. You might find it is difficult to spread evenly, but do the best you can. Messy caramel is still delicious. Baking absolves most sins (technique-wise, that is; emotionally, you're on your own). 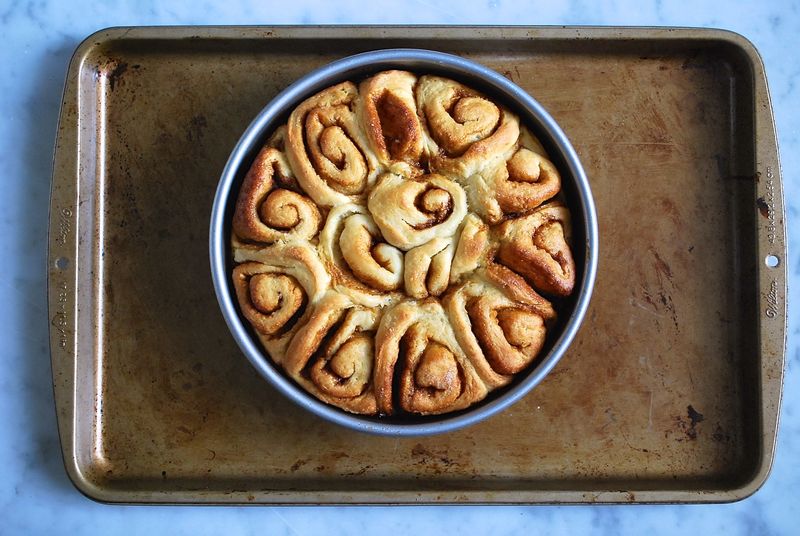 I recommend lining your pan with parchment. Some of the caramel will slide to the bottom of the pan, but the parchment makes it easier to pull the rolls out. The result is a thin layer of sticky caramel around the base of the rolls. It's just as good as it sounds.

You're welcome to frost these rolls, but I preferred them without adornment. To say that adding icing puts them over the top is an understatement.

Makes one 9-inch round or square pan

For making the filling and assembling the rolls:

Posie (. February 23, 2018
Oh gosh, good question. Honestly I wouldn't chance it -- it's not much but it definitely tastes like whiskey. I'd suggest just leaving it out and it'll still be wonderfully delicious as a plain caramel sauce!

Joanna H. February 23, 2018
Ok, thanks. Maybe I'll have to make two batches - one for the littles and one for my husband and myself!

Ntombi N. January 1, 2016
I am starting the year with a detox but maybe i will try this recipe before diving in.

Kathy December 29, 2015
I'm wondering what can be substituted for the whiskey? I do not drink, and would not use it in the recipe. Is there anything else I can use, or would it be noticeable (consistency-wise) if I just did not add it?

Ntombi N. January 1, 2016
I think you could use a strongly brewed coffee (plain or flavoured...think hazel nut)...or if you are not into coffee (neither am I), you can use a strongly brewed chai tea. Alternatively you can heat the whisky. Heating evaporates the alcohol content but retains the flavour.
Author Comment

Kathy January 5, 2016
Thanks for the responses! I think I would skip it all together. I don't really drink coffee, or tea, either. Recipe sounds great!

Matt November 3, 2015
I love this website, and would love to try this recipe (they look amazing), but please please please can writers stop using cups as a measurement. I've tried to research what a cup measures, but apparently depending where you are, a cup has a different weight. Obviously this would completely change the final product, and I really want some nice cake. So, please can you use real measurements, or, if you have to use cups, at least stipulate what you consider a cup measurement to be.
Rant over, they look lovely ;-)
Author Comment

Posie (. November 3, 2015
Haha, I hear you. For baking purposes, I recommend using this guide (http://www.kingarthurflour.com/recipe/master-weight-chart.html) which is really spot-on for translating cups to weights. With some recipes I post, I do use weights as many breads doughs are so sensitive to flour amounts and most people measure out cups of flour differently. Will keep your request in mind for future recipes!

Pisanella November 3, 2015
I've tried to research what a cup measures, but apparently depending where you are, a cup has a different weight.
Matt, you are missing the point - cups are not about weight per se. Don't worry yourself unduly about that - obviously a cup of butter weighs more than a cup of flour, but as long as you stick to cups and just follow the recipe, you will be fine! I am from the UK and I LOVE the use of cups - so much simpler then weighing everything!
Author Comment

Posie (. November 3, 2015
Here, a cup of all-purpose flour weighs 4 1/2 ounces. I do really recommend weighing your flour out, because the flour amount will make a very big difference in texture. These rolls are very forgiving, but with other baked goods like cakes, definitely worth measuring the flour! The other ingredients matter less to measure, but the issue with flour is people often don't fill their cups properly -- you should be spooning the flour in lightly, instead of scooping or fluffing the flour. Try measuring out a cup the way you normally do and weighing it to see how close you come to 4 1/2 ounces -- it's a good test to see if you are measuring it out accurately!

Pisanella November 3, 2015
I've tried to research what a cup measures, but apparently depending where you are, a cup has a different weight.

I was quoting Matt

Bella B. November 1, 2015
I am a big time fan of Cinnamon rolls and I am definitely going to try this recipe! Hope you had a great trip!

JOEY November 1, 2015
Shame all of the photos are of traditionally-iced cinnamon rolls and not a one with the actual salted caramel sauce from Posie's recipe.
Author Comment

Posie (. November 1, 2015
Actually those are all my photos of the salted caramel rolls (except for the second one)! So the rolls pictured are of this exact recipe. The sauce is inside the rolls -- not as a topping -- so they look similar to regular cinnamon rolls but have a sticker, saucier interior. Deceptive and delicious!

JOEY November 1, 2015
Oh, excellent! I misread the part that the salted caramel goes on last and was confused! Thanks Posie!

Tanya Q. November 1, 2015
I live alone and Id eat them all, so can you 1/2 this without a problem. How about freezing?
Author Comment

Posie (. November 1, 2015
I'd suggest making the full recipe and freezing. They freeze beautifully -- just pop them in the oven to reheat.