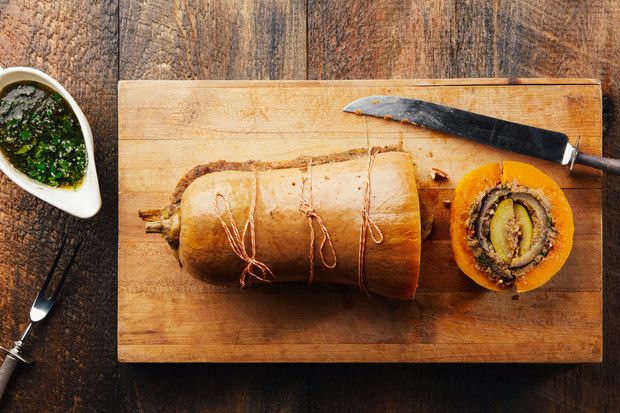 The premise is simple: You know a turducken? You stuff a chicken in a duck in a turkey. Now take that concept and make it vegetarian.

Unofficial sources (a.k.a. me) say the trend started with Dan Pashman, who created the Veggieducken in 2012 for his Cooking Channel web series Good to Know. The media went wild. The Kitchn, Huffington Post, NPR, and PETA (naturally) held on tight: It was a centerpiece-worthy vegetarian-friendly main dish—what a sign of the times! Dan’s squashleekotato—“two sweet potatoes inside leeks inside a banana squash, with vegetarian stuffing between each layer”–wasn’t a one-year gimmick, though. Dan gave the people what they wanted: more information about it on Slate and his podcast The Sporkful in 2014. And he gave us even more this year:

"Vegetarians don't like it when you tell them they're missing out on Thanksgiving. But they're missing out on Thanksgiving. Not because you have to eat meat to enjoy the holiday, but because it's the one holiday when the focal point is the preparation of a huge, time-consuming dish that you'd never bother to make any other time of year. When you put that massive platter on the table and everyone sits down to eat, that's the climax—the payoff of hours or even days of anticipation and effort. No number of delicious side dishes can replicate that. And I wanted vegetarians to have that experience too." 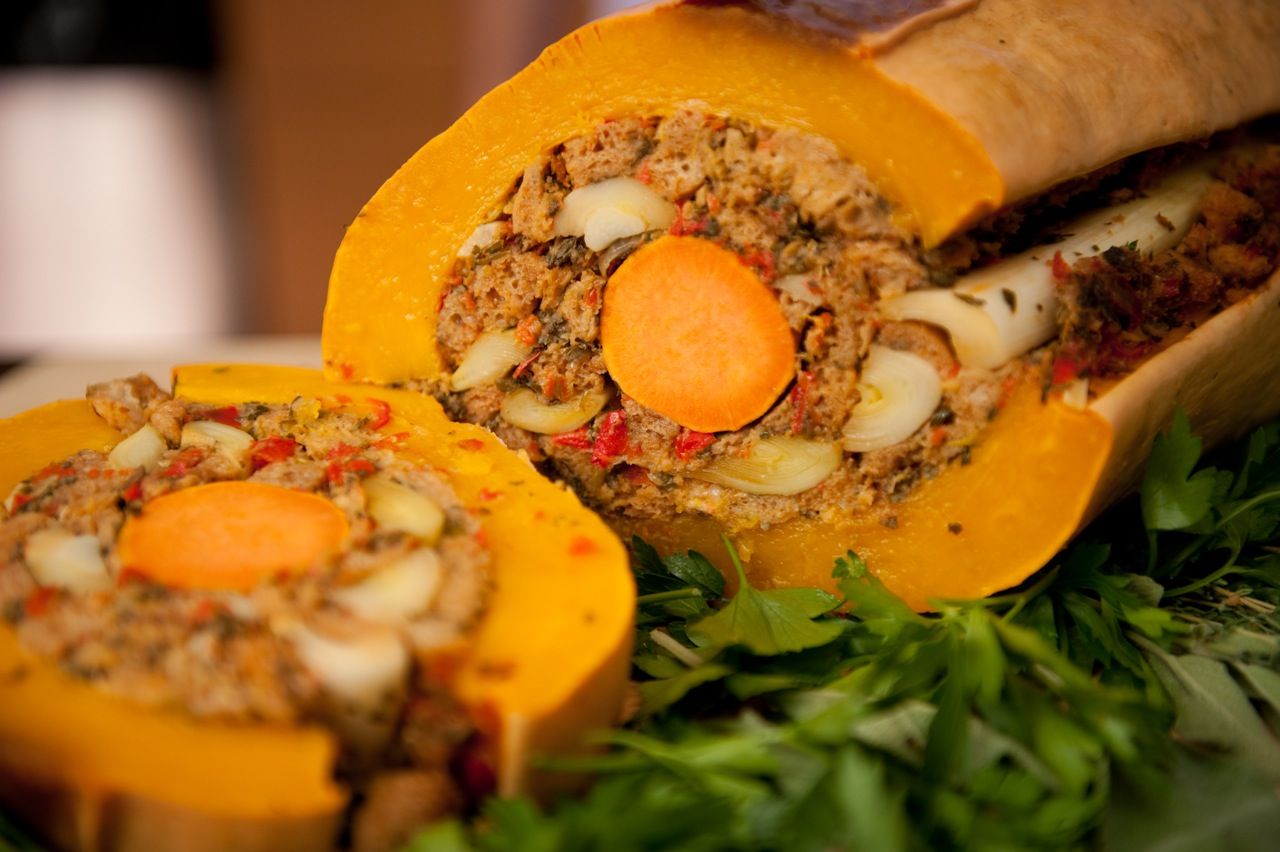 Thanksgiving 2014 came and went, and so did the veggieducken. Now it's back, with a vengeance. Our friends at Epicurious planned—and delivered—on their version of a “#vegducken.” And we've been concocting not one, but two, squashduckens for weeks. 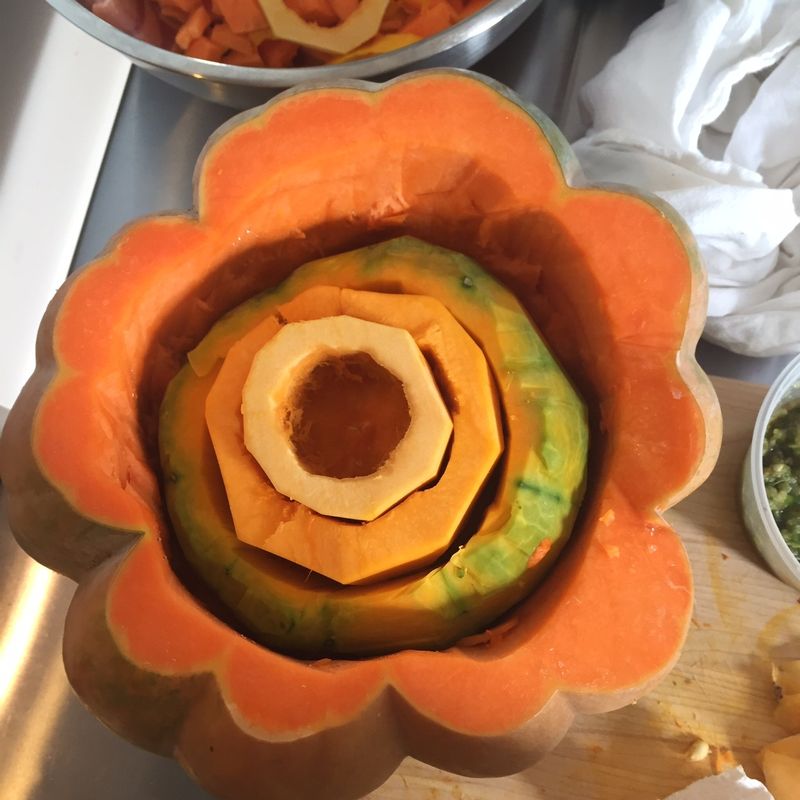 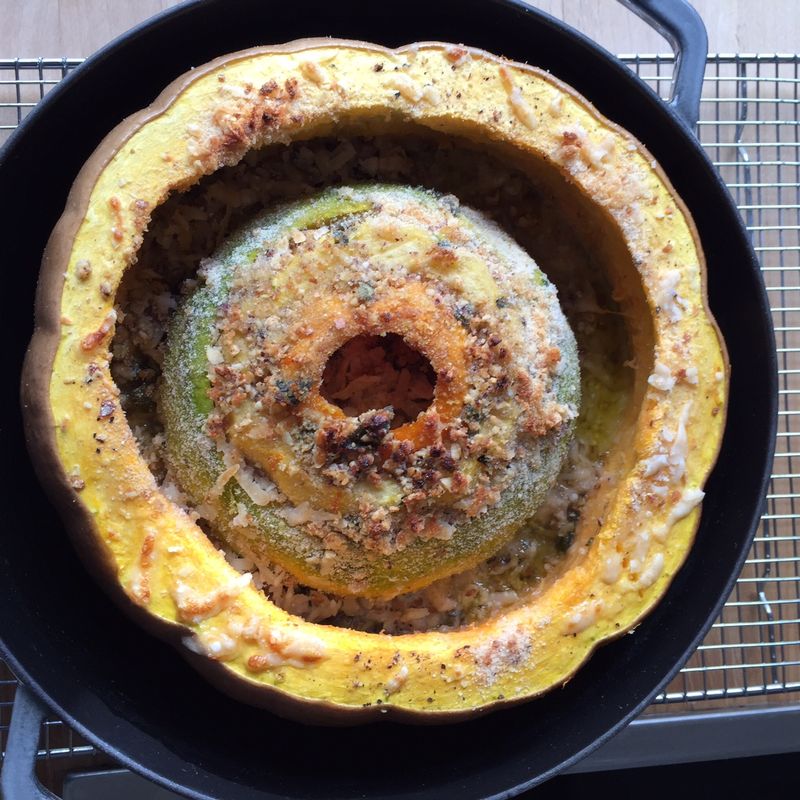 Our savory squashducken, in development.

At least 15 squash were roasted, microwaved, and/or steamed during the development of our squashduckens. They are almost ready to be revealed—as you read this, they’re in our photo studio, with makeup on.

There's a sweet one—The Squearpleberry—and a savory version. (We like to fancy ourselves trailblazers, even when following a trend.) Check back on Friday for official unveiling.

First image courtesy of Epicurious; second of The Sporkful; all others by the editors.

elizabeth November 6, 2015
Ok where is the follow up to this? I need recipes! And pictures. Definitely pictures!
Author Comment

LOL - I'd still run from anything with "...ducken" if I were a vegetarian. Still, it sounds yummy!

ChefJune November 3, 2015
How can you call it "ducken" anything when there's no duck in it? There must be a more creative name than that.

Ali S. November 3, 2015
I think it's because people have a feeling they're getting food stuffed in food when they hear "ducken," which is helpful when the recipe has lots of components. But portmanteau names are fun to dream up: Our sweet one and Dan Pashman's have ones (squearpleberry and squashleekotato, respectively).