What the Heck is the Maillard Reaction (& Why Should You Care)?

The Maillard reaction isn't unlike the economy.

It's the default explanation for a whole slew of questions, but it's shrouded in a veil of mystery, and most people don't seem to really understand very much about it (even if they pretend to). 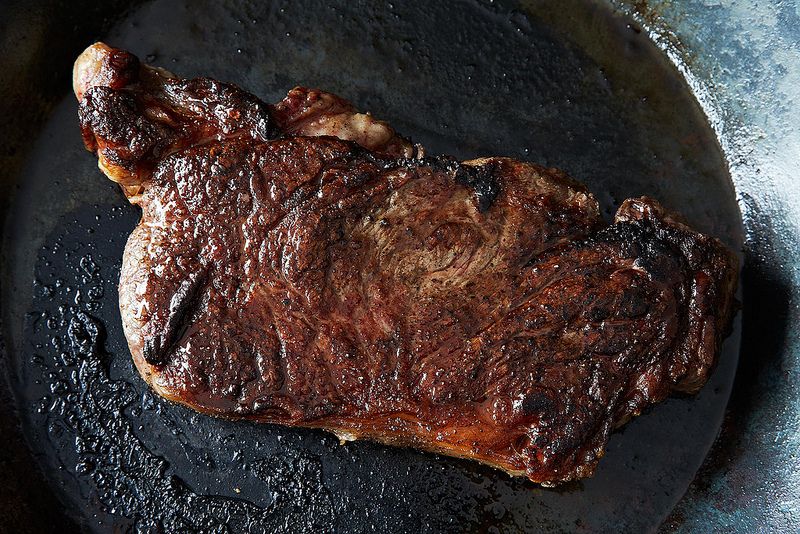 Why do the brown bits of roasted vegetables always taste the best? or
What's the point of getting a good sear on a steak? or
Why is it benefecial to smash potatoes and get a greater surface area for cooking them? or
Why does a fried egg taste different than a poached one?

...you get the same answer: It's the Maillard reaction, stupid! 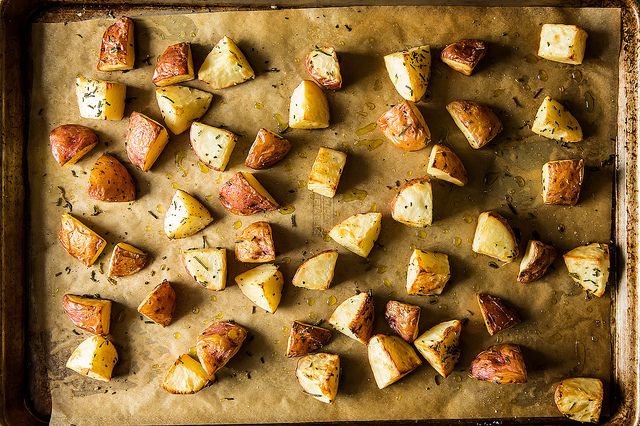 So what's the deal?

The sear on your skirt steak? That's the Maillard reaction. The color of your toast? Maillard. The craggy, crisp bits on your fried egg? That's it, too. 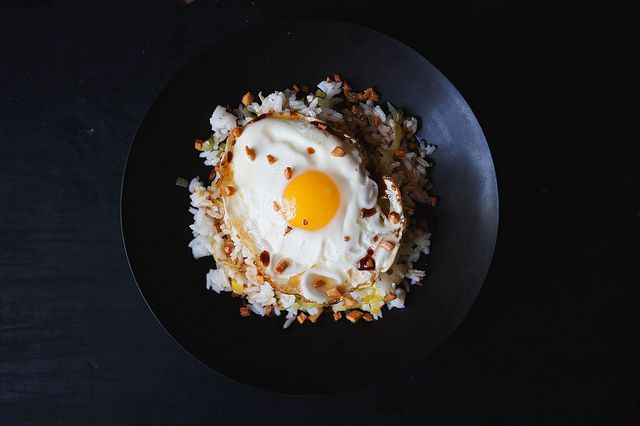 Kenji J. López-Alt, food science expert at Serious Eats and author of The Food Lab, describes the process as a cascading waterfall. What starts out as a simple reaction between amino acids and carbohydrates becomes, as the folks at Modernist Cuisine explain, almost exponentially more complicated. The byproducts of early reactions continue to respond in increasingly complex ways, generating hundreds of new molecules, all of which contribute to the flavor and aroma of the food.

If all of this sounds really complicated, you're not alone: The reactions take place so quickly, with hundreds of relationships breaking and forming simultaneously, that, according to Kenji, much of what exactly goes on is still unknown. The Maillard reaction, at least at the microscopic level, is still somewhat of a mystery in food science, as perplexing as the processes of fermentation. 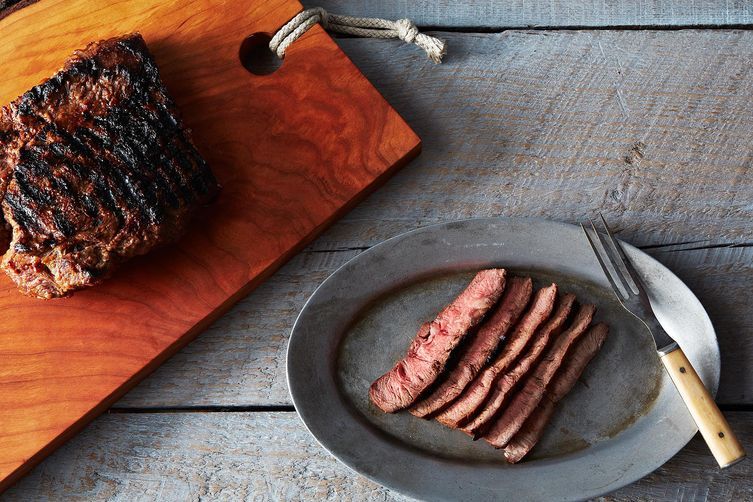 While it's not uncommon for the Maillard reaction to be conflated with "browning" in general, it's a misconception; there are many separate reactions that result in a similar change of color.

Take caramelization. The non-enzymatic browning reaction behind the brown top of crème brûlée and this richly flavored frosting occurs when sugars are oxidized. Unlike the Maillard reaction, it does not involve proteins. But to complicate matters, the two reactions frequently occur side by side. "Caramelized" onions, for example, have not exclusively undergone caramelization; while the sugars in the onions do oxidize, the proteins in the onions are also reacting with simple sugars in the Maillard reaction—both processes are happening at once, says Kenji.

And then there's charring and burning. At high enough temperatures, molecules are eliminated rather than generated. Yes, the food is becoming brown, but at this point, it's combusting as a source of energy, and you'll get harsher, simpler, and less tasty flavors. 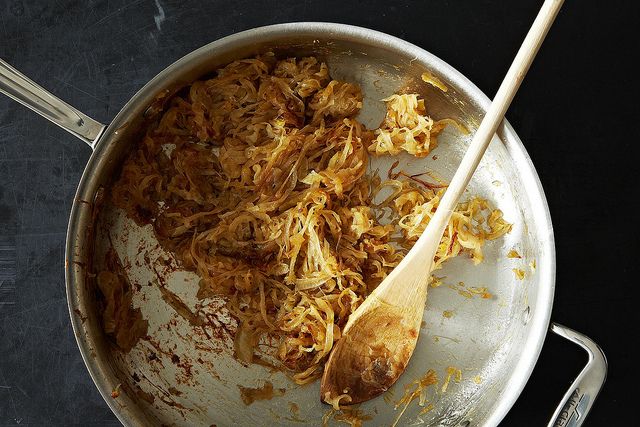 How can you use the Maillard reaction to your advantage?

The Maillard reaction takes place more rapidly at a higher heat (that is, until you venture into burning territory). You'll want to aim for the 350° to 400° F range, where the rate of chemical reaction is faster and water evaporates more quickly. With the water out of the picture, less energy is expended on its evaporation and more goes into the Maillard reaction.

That's why you want to get your steak as dry as possible before adding it to a screaming-hot pan. And it's why Kenji recommends you leave cut vegetables uncovered in the refrigerator overnight; by drying them out, you're ensuring that they'll brown nicely when you roast them the next day (see the following photo for evidence!). 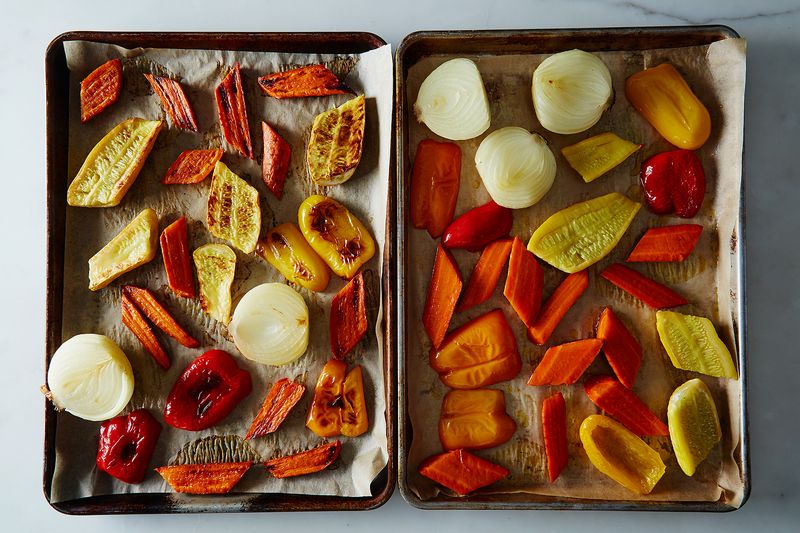 The vegetables on the left had sat, uncovered, in the refrigerator overnight before being roasted.


Second, the Maillard reaction occurs more quickly in alkaline environments (basic environments where the pH is above 7). Adding baking soda, a mild base, raises the pH of the food and will therefore speed up the Maillard reaction. Kenji's super-fast caramelized onions rely on the addition of 1/4 teaspoon baking soda to accelerate a process that's traditionally low-and-slow.

Baking soda can help you in other ways, too. Modernist Cuisine notes that Chinese cooks often marinate meat or seafood in mixtures containing egg white or baking soda immediately before stir-frying, and Kenji recommends rubbing chicken wings or porchetta with a mixture of salt and baking powder (like baking soda, it raises the pH) to achieve the often-elusive crispy skin. 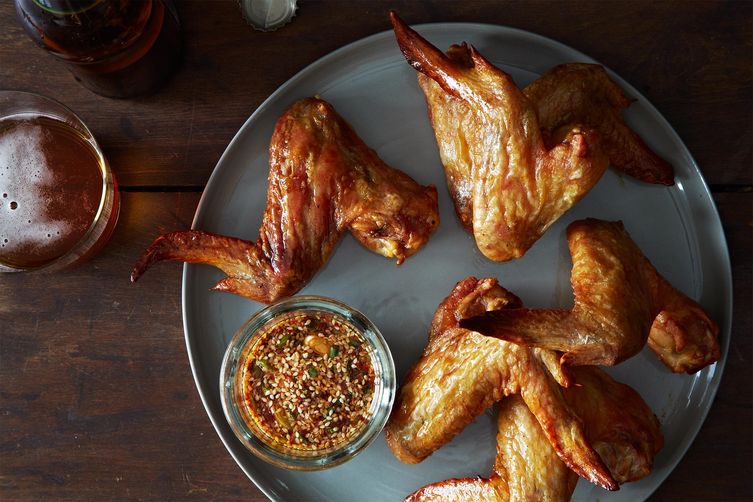 So you may never know (or care to know) about all of the teeny-tiny reactions that make the brownest parts of your roasted cauliflower the most valuable. But you now know enough that the next time you scoop away all the crispy, burnished bits before your friends can get to them, you can look them in the eyes and say, with confidence, "It's the Maillard reaction, stupid!"

Smaug July 11, 2019
Unfortunately, unless you understand the reaction thoroughly on a subatomic level- which would need a strong background in chemistry- it's just a name, it really gets you no closer to knowing what's going on

Heavenly T. December 6, 2018
So interesting! I always knew my chicken breast grilled better in a grill pan when it was more dry. Now I know why....

Mary December 28, 2015
Is Millard Reaction the same thing that they are now saying is cancer causing? They say the browning results of caramelizing and the browning of foods is bad. Am I missing something or misunderstanding the recent articles on processing foods?

Bunny December 26, 2015
I am a " how and why" learning person and that was terrific! If I understand the theory behind a process it all makes sense. Thank you so much. More please!

Deborah F. December 26, 2015
In Argentina they "dry" the meat in the refrigerator and then rub it with cornstarch and salt just before searing it in a cast iron skillet or grill that is screaming hot! Perfect every time! Thanks for this post... very well explained.

Kaz December 26, 2015
Wouldn't bother to read a book on it... but cool post! Love it! It's a fascination that I'll definitely check out more quick reads on if they pop up... And I think this is gonna help me towards perfecting meat. And now I know why they tell you to dry the potatoes...

reader November 23, 2015
no time for a spell check? would have been beneficial (not benefecial) but nice article, making me hungry.