On the weekends, when I'm prepping dinners for the week, I'll often cook a handful of basics to have around. These come in especially handy for lunches. Today, for instance, I layered arugula with flageolet beans (that I'd simmered until tender and put in a container in the fridge), olive oil-poached tuna (jarred would have been fine), and roasted Brussels sprouts (also cooked and put in a container). The pickled onions were left over from our Sunday night tacos. 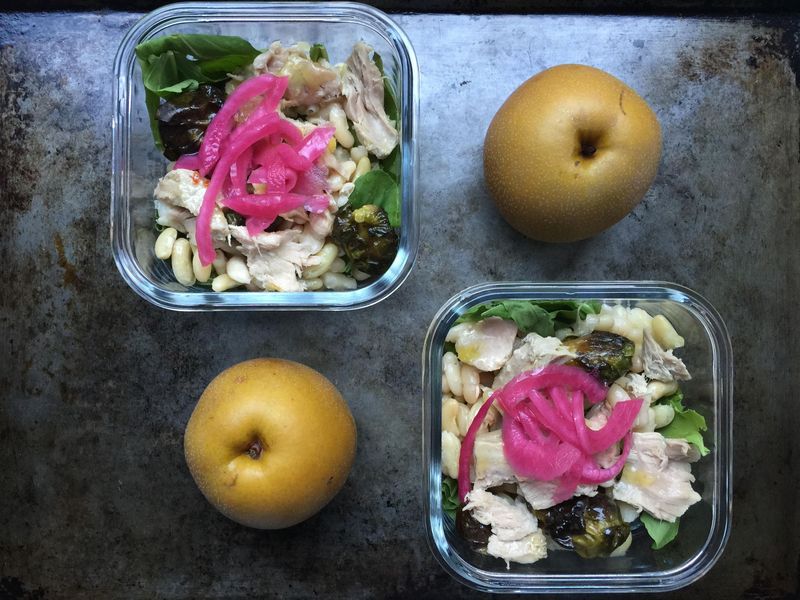 To dress the layered components, I used some of the tuna poaching oil, and a squeeze of lemon juice. I could have sliced up the Asian pear and slipped it in the salad, but I thought it would work better as a complimentary dessert—that also happened to be easier on me!

What's in your lunch today? Tell us (and make us jealous) in the comments.

Bob December 7, 2015
This recipe is an absolutel winner.

LANIE November 8, 2015
i've found that also prepping a few things that last well during the week in the fridge always means a better lunch or snack. would love to read more suggestions about meal prepping :) love this column!
Author Comment

Amanda H. November 8, 2015
Thanks, Lanie -- Merrill and I are actually writing a book about meal prepping, so more suggestions are in the works!