Why Is Halloumi So Expensive?

I ate pan-fried halloumi, a firm, mild cheese, for the first time this summer—and then, smitten, sought it out the next time I was at the grocery store. But I stopped short when I did locate it, wrapped tightly in plastic, in the cheese case: I was not prepared to pay $8 for a half-pound package of halloumi. 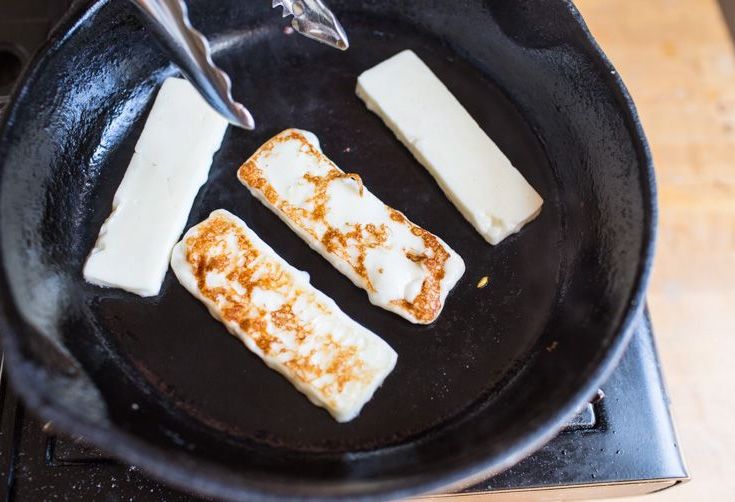 But it turns out $8—and even, sometimes, as much as $10—per half-pound (that's $16 to $20 per pound) is the going rate. For a cheese that has a lot in common in the flavor and texture departments as cheese curds and paneer (which, at only about $4.50 per pound, I think of as inexpensive cheeses), I was dubious. So why is halloumi so expensive? According to Walshe Birney, the buying manager for Murray's Cheese in New York City, there are a few reasons.

"The geography of Cyprus is to blame," Walshe told me. Halloumi is made almost exclusively in Cyprus, and lack of infrastructure exists for getting goods out of Cyprus to Greece and beyond. (And the economic troubles Cyprus and Greece have had in the past few years have not aided in the export of halloumi or the reinforcement of infrastructure. These economic issues have also influenced the prices of other Mediterranean cheeses, like feta, which also goes for about $6 per half-pound.)

What's more, halloumi is made from sheep's milk, which is more expensive than cow's milk or goat's milk due to a lower milking yield from sheep. And halloumi is often aged, which can also amplify the price. This explains why paneer and cheese curds, both fresh, unaged cheeses made from cow's milk, are so much less expensive. 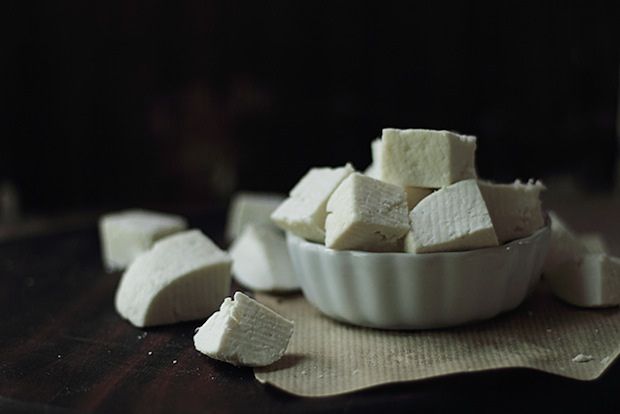 And finally, because halloumi has had a bit of a moment—Walshe says he's seen a huge spike in interest from people coming into Murray's—increased demand has coincided with the country's economic downturn. With Cypriot banks failing, there has been little money to invest in the halloumi industry and few opportunities for it to expand. More demand for halloumi than the ability to produce it puts it at a premium.

But if you do get your hands on some halloumi, there's a lot you can do with it; it's one of Walshe's favorite cheeses ("Nothing is harmed from the addition of some halloumi," he said) to eat as part of his breakfast or dinner. Fry it in a pan or grill it on skewers: The low levels of acid in the cheese keep it from melting, so it browns instead and becomes pleasantly squeaky (try it in saag paneer, or a grapefruit halloumi salad, or baked with lemon). But if you'd prefer not to spend so much on halloumi, you can achieve similar results with paneer or Scandinavian bread cheese.

What other ingredients are you curious about? We want to demystify them!

Penny September 12, 2019
My biggest sticker shock after moving to the US was the price of halloumi here. When we were living in Europe, halloumi was a cheap and happy staple you could always find in our fridge. Now I make my own which, while not as convenient, is thankfully just as delicious. I just wish American cheesemakers would catch on to this particular gap in the market so I could be lazy more often and just head to the nearest supermarket ;).

George B. September 11, 2017
I'm in the UK which is the 2nd largest (after Cyprus) consumer of halloumi in Europe. The price here for half a pound is about $2.50. It has got so popular that it isn't uncommon to find English produced Halloumi, although often it comes from Greece. The other thing is that often halloumi is made with other milks to produce slightly different tastes and keep the cost down.

Konstantina J. November 16, 2015
LOL! Halloumi doesn't cost any more than the cheeses made here in California, not 90 miles from my supermarket! You are very silly if you think that's "so expensive" for good cheese. It's certainly not any more expensive than some of the other European specialty cheeses at the local store. I have a chunk of rather ordinary Italian cheese in my refrigerator right now that says $18.99 per lb. on the label.

Francine T. November 15, 2015
Slice it thin, pan fry it and use it instead of bacon! It becomes super crispy and with its salty deliciousness, makes a perfect HLT sandwich (minus the guilt of a dead animal between your slices of toast!) - instead of bacon, lettuce, tomato

MaryAlice November 15, 2015
I marvel at the complaints of expensive items from where I live. Not only is it rarely available, but it is more expensive that yours here on the northern California coast. I first had this cheese in Greece and loved it. When I see it, every several months, I pick it up and prepare one of those plates with everything that goes with it.

Terry M. November 15, 2015
If you have access to a Middle Eastern market it is not nearly so expensive.

Clea M. November 13, 2015
This is one of the moments I'm glad I (currently) live in the UK, where halloumi is abundantly available and about $3 for 250 grams.

Kevin K. November 12, 2015
Actually, Halloumi is not really expensive if you are not a stickler about whether it is a) from Cyrpus and b) It's made with sheep's milk.
Try sourcing cheese from Ulker (icim) or Tek Sut. You could actually buy an 8 oz package of Ulker Icim Hallim for about $3.50 to 4 if you know where to look, and inside something like Shashouka, it works just as well.

Why yes, it's from Turkey - but then 1/3 of Cyprus is ethnically Turkish, and Aegean Turkey is pretty much culinarily similar to the Greeks anyways.

Penny September 12, 2019
Do you live in the US and buy this halloumi locally? If so, may I ask where?

Kevin K. September 12, 2019
Yes, I am in the states, specifically NYC Metro. If you are in NYC try places like Sahadi's, Dual Specialties, Kaluystan, Baladi's, Parrot foods....basically any grocery store patronized by a local Turkish population.

Cynthia C. November 11, 2015
Oh gosh, YES -- I'm so smitten with halloumi too. Love this, Caroline!! (For at least explaining its price, if not assuaging my grief over it.) I'm also now really intrigued by Scandinavian bread cheese.......

Elsa K. November 11, 2015
As a Cypriot (not, "Cyprian"), I'm happy to see an article on our national cheese. Another reason for the high price of imported halloumi, which is currently being evaluated for PDO status, are good ol' politics: http://cyprus-mail.com/2015/11/11/our-view-halloumi-problems-caused-by-pandering-to-special-interests/
Author Comment

Caroline L. November 11, 2015
wow, elsa—thank you for sharing this article. (and thank you for correcting me—i've made the change in the piece!)