As much as we love tomatoes, the "guts" can be overwhelming or overly juicy, or maybe you really don't want the tomatoes' seeds in your batch of sauce. And so we smash or slice them open and squeeze out the goop, leaving just the meaty tomato flesh behind.

But it seems a waste to toss the liquid—which tastes as much like a tomato as the rest of the tomato—down the drain. Chef Michael Ruhlman knew to capture the water and swirl it into hot pasta, almost like a super-light tomato sauce; we've seen it turn into a feisty vinaigrette.

And over on our (Not)Recipes app, our community member Rachael Strecher knew to turn it into a granita which, she says, tastes like "the purest, most refreshing essence of summer." 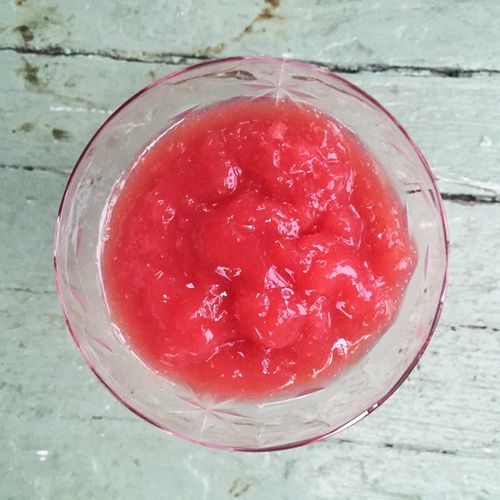 Rachael Strecher over 4 years ago
12
The purest, most refreshing essence of summer: tomato granita. Kitchen experiment gone right. I had to remove the tomato "guts" for a bunch of slow roasted tomatoes, and it seems like a shame to waste them. So I put them over a sieve and captured that nice tomato water. I thought I'd try an aspic or savory jello, so I mixed it with gelatin and some cucumber water (blended some cucumbers, gave them the sieve treatment). I didn't think it was turning gelatinous so I put it in the freezer and scraped it he ice crystals with a fork every 30 minutes or so until it became slushy. The gelatin seemed to work after all, so I think you could take it in either direction. It had a beautiful, clean flavor of tomato and thanks to the gelatin, resembled the texture as well, but without the seeds and able to serve bone cold with delicate little ice crystals. #summer #produce #everlastingmeal

To the tomato water she added the liquid from a blended, sieved cucumber and some gelatin, aiming for a gazpacho-esque, aspic-like result. But when it seemed like the gelatin might not be setting up, she put it all in the freezer instead, raking it with a fork every half hour until it turned into granita. And, because of the gelatin, it even somewhat mimics the a tomatoes texture, but sans seeds.

You're not alone in wanting to dive right into the bowl. We'll add a fat sprinkle of flakey salt and maybe a drizzle of olive oil and a basil leaf, too.

How do you use tomato water? Tell us in the comments—or show us on our app!

HalfPint August 8, 2016
Gazpacho popped into my head as I was reading this.

Along the gazpacho line of thought, I would make pan amb tomate (sp?), the Spanish equivalent of bruschetta, which is toasted bread rubbed with a clove of garlic and a tomato half. Only, I would drizzle the tomato guts over the bread and enjoy.