Every Wednesday, food52's Senior Editor Kristen Miglore is unearthing recipes that are nothing short of genius. This week: a simple formula for doing right by fish, from Eric Ripert's On the Line. 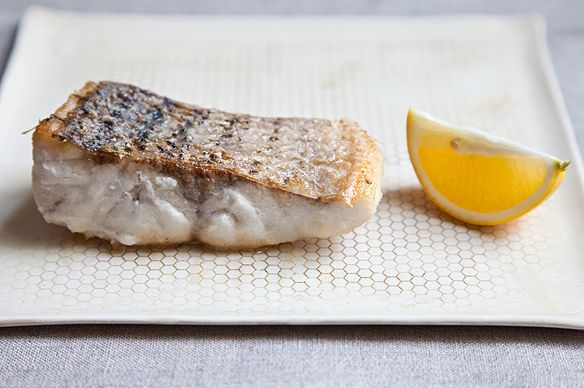 When I was a wee culinary student, I spent one very long, lucky Saturday trailing in the kitchen at Le Bernardin.

I minced parsley, nervously. I huddled among the line cooks, tasting spoonfuls of soulful, intricate sauces. I wandered into a walk-in, where geoducks lolled out of their buckets (look, terrifying!). I tried, and failed, to help a person much more skilled than I drag crusty, frozen bread across a meat slicer, making planks as thin as Melba toast. I stood transfixed in front of pastry chef Michael Laiskonis' dark, calm lair for a good 40 minutes, until he handed me an eggshell filled with chocolate custard.

But mostly I backed into a corner and watched. The pre-theater rush of orders stirred up the cooks in the raw station first at 5pm, then pulsed through the kitchen, on and on the rest of the night. (Here's a glimpse of what it looked like, from the blog Zen Can Cook). 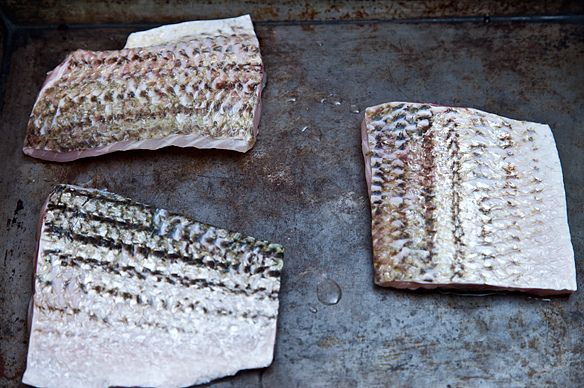 In this carnival of high technique, there were many things I would never try at home. For those flourishes, I would go to Le Bernardin for dinner, in my approximation of fancy clothes, and it would be worth it, I promise you. But there was one surprisingly simple technique, showed to me proudly by a nice fellow on the line, that changed the way I cook fish at home.

The secret ingredient? Wondra® flour, usually heralded for its clumpless gravies and sauces. It's "the quick and easy flour for today's lifestyles" (a tagline that probably hasn't been updated since the product's debut in 1963). But despite its scary casserole-era gimmickry (and packaging), it turns out it's long been a favorite of Julia Child (for crepe batter), Jacques Pepin (for chicken cutlets), David Bouley (for dusting anything pan-fried) and, in turn, Le Bernardin's gleaming star chef, Eric Ripert (above, a-gleam). 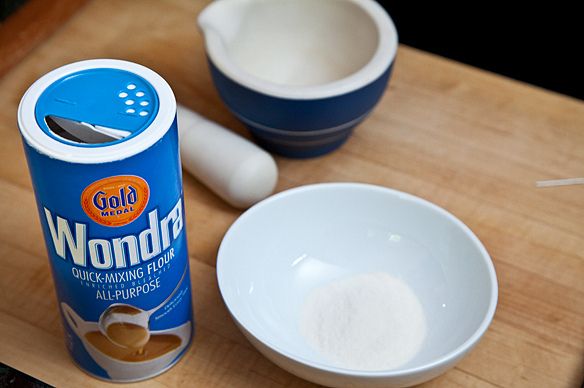 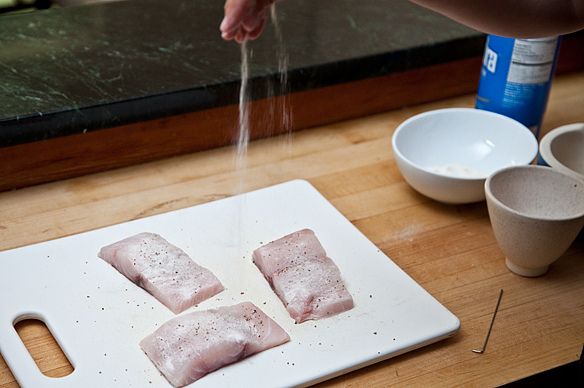 Classically trained French cooks. A decidedly American convenience product. What gives? For his part, Ripert says he learned the technique in Bouley's kitchen in the early 1990s, his last post before moving to Le Bernardin. "It surprised me because in France we didn’t use any flour at Jamin (Joël Robuchon's first restaurant). We didn’t use anything at all for this purpose when sautéing fish -- but I found Wondra makes it easier."

Wondra is known more generically as instant flour, because it has been pre-cooked and dried using a "patented agglomeration process" (shh, General Mills) -- which leaves it with a fine, slightly gritty texture, reminiscent of cornmeal. Some malted barley flour is thrown in too. All of this means that it's more prone to beautiful browning and crisping than regular all-purpose flour. 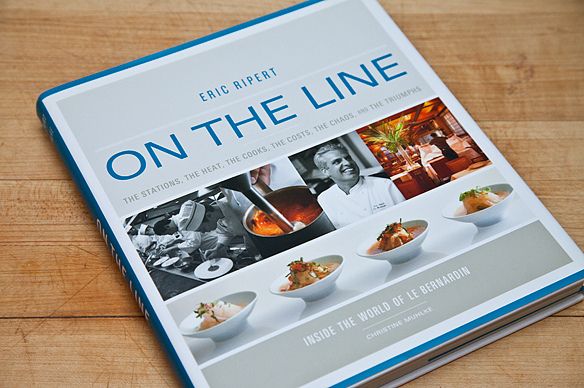 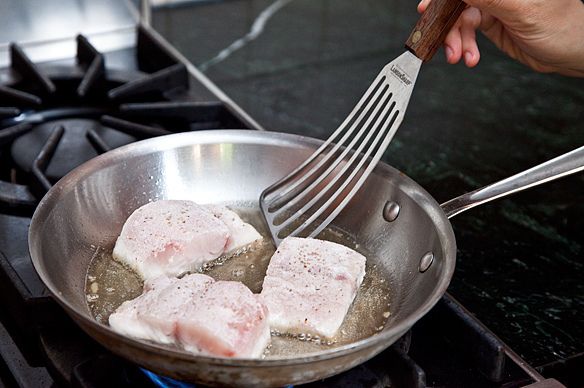 Ripert has been known to use Wondra on anything from monkfish loins to soft-shell crab, but it's especially good for bringing out the beauty of skin-on fillets of things like salmon or striped bass. It goes like this: Dry your fish well -- you can even squeegee off excess moisture with the back of a paring knife. After dusting with salt, pepper and Wondra, you lay the skin side in bubbling canola oil and press down commandingly with a spatula (the skin contracts and buckles instantly, and you want to keep it all in contact with the pan).

A couple minutes later, you flip the fish, and shove it into a 400°F oven, where the skin will continue crisping up in the dry heat as the bottom poaches in the oil. Wait just a couple more minutes, then pull it out and stick a metal skewer into the center. Count to 5, then touch the metal to your lip to make sure it feels just warm. Done. The skin should be golden and taut, the flesh tender and just cooked through. 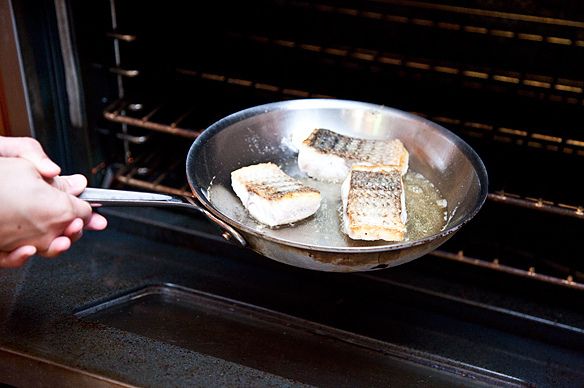 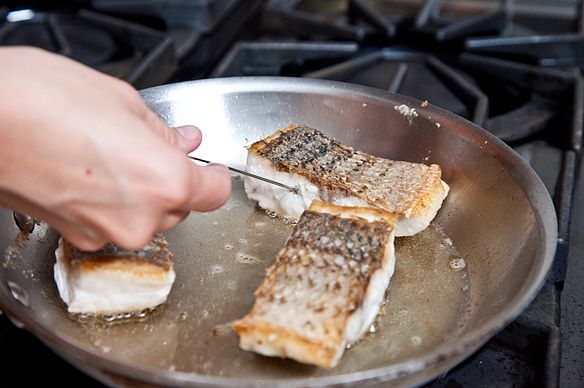 Seafood is increasingly precious these days. You want to treat it right and you really want to taste it, every last bit. Once you get this simple rhythm down, you won't overcook it, undercook it, or push the soft, slack skin to the side of the plate again.

Adapted from On the Line by Eric Ripert and Christine Muhlke. 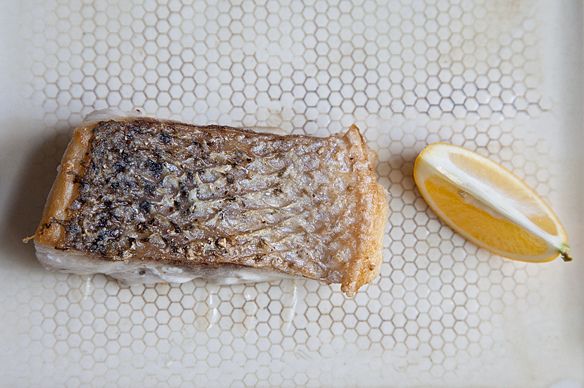 Got a genius recipe you'd like to share -- from a classic cookbook, an online source, or anywhere, really? Please send it my way (and tell me what's so smart about it) at [email protected].

allie August 11, 2011
Just riffed on this dish last night as follows: made the fish with salmon, but kept it all on stovetop (didn't have time to preheat oven). Once I turned the fish, I added grape tomatoes, zucchini and basil to the pan and covered it with foil ... One dish dinner and now Wondra is my new go-to ingredient for fish (maybe will try with chicken cutlets??)

dymnyno August 3, 2011
Well, Wondra is older that Eric Ripert and yes, he is very handsome. I think that the genius award should go to Wondra, not to a chef who uses the product. Wondra is a genius product that has been in my own pantry for at least 30 years. Making crispy fish skin is not genius.

R D. June 27, 2013
No. But, busting ass and owning a Michelin star restaurant in NYC and being a celebrity is a bit more genius than having Wondra flour in your pantry.

Sharon April 5, 2014
Dynamo is right. Credit where credit is due. Americans have been using wonderful Wondra in this way for decades, and most of them never even HEARD of a Michelin star, let alone Eric Ripert. Wondra flour certainly doesn't need Eric (whom I adore and respect) to give it credibility. I just don't see any logic in your comment. Sorry.

nutcakes July 28, 2011
I was taught,in a cooking class years ago, to use Wondra to dust freshly made pasta with instead of regular flour. The gritty texture of the Wondra works well to keep the pasta from sticking together if you are waiting to cook it, and it shakes off more easily than regular flour so the pasta doesn't get gummy when you drop it into the water.

I recently used it for some oven fried chicken wings and the crispy texture was great.

LucyLean July 26, 2011
I love WONDRA - was introduced to the wonders of Wondra by that other Fish genius David Pasternack when he showed me how to make Fish and Chips

meredith July 26, 2011
amd I use it with boneless skinless chicken breast cooking, and great to use with stew beef..

meredith July 26, 2011
i have always loved and used wondra, I know with a little pressure gold medal would produce it i organic..

flo.makanai July 26, 2011
I've never used Wondra, and it's not sold in France anyway, but I've been using starch (rice or tapioca, also sometimes called flours, in asian stores) to dust my fish, like it's often done in Asia. Try adding some fleur de sel and a lot of freshly cracked pepper to some starch, dip the fish (or, mmmm, the calamari) and drop in hot oil until it's just golden, do not overcook or it'll spoil everything, yummy!! All the juices are kept inside, fantastic. Works with thin slices of poultry too.
Bon Appétit everyone :)

bmallorca July 25, 2011
I just learned the skewer to the lips technique last week, in the Rancho La Puerta demo/class kitchen, from chef Denise Roa. Looks a little scary to me. . .Denise did it with the tip of a knife.

It's so funny how that works -- something you have never heard of in your whole life will show up twice, just days apart.

Meatballs&Milkshakes July 23, 2011
I'm going out to try some today! I just had the sticking-fish problem last night. Does it work as well on a fillet without skin, like tilapia or sole?
Author Comment

TXExpatInBKK July 20, 2011
I'd love to know more uses for Wondra... Food52 should make it a contest! "Your best Wondra recipe"

sixelagogo July 20, 2011
i was "turned on" to the wonders of Wondra for the first time when i sat at the bar at Mario Batali's Casa Mono in NYC and watched the chefs dip sardines into the flour then fry them whole. Amazing. I now use Wondra for my fried squash blossoms stuffed with ricotta and have never looked back.

Windtryst July 21, 2011
Do you make your own ricotta? It is squash season, can you share your recipe?

AntoniaJames July 20, 2011
What's surprising to me about Wondra is that not everyone has a can of it in their cupboard, and is already using it to dust on fish before frying! Until I recently started using rice flour (thank you, pauljoseph), I couldn't imagine using anything else. That this product is in a shake can is what clinched the deal for me initially, that is, sometime in the early 1980s, when I established my own kitchen. It's an excellent product, but I often wonder if it would have taken off and endured the way it has as an essential staple in so many ktichens, had it not been introduced in that handy container. ;o)

Kitchen B. July 21, 2011
Thank you for the rice flour reminder....since I can't readily get my hands on a fancy can of Wondra. Rice flour I can make myself....and have done, also from Paul Joseph's fish recipe.

gluttonforlife July 20, 2011
For those who can't eat gluten, I recommend substituting rice flour.

chelseachef July 20, 2011
I had fish skin-sticking-to-the-pan frustration just the other day. I'll try this technique - thanks!!

Kitchen B. July 20, 2011
Next time I'm in the States, Wondra shall be on my shopping list....I've heard so much about it. And Eric is cute. Love his eyes. And the fish recipe too!

heide July 20, 2011
I have never heard of the Wondra before and I have cooked many of Julia's receipes.
I will have to purchase some. Thank you...I have learned something new today...