Every week, Food52's Senior Editor Kristen Miglore is unearthing recipes that are nothing short of genius. Today, ribs that ditch the low-and-slow doctrine -- and make you popular anyway. 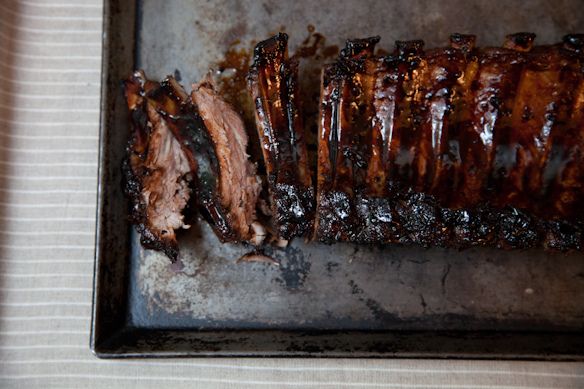 "These ribs just might be the best thing I've ever come up with," Gourmet magazine's then-Food Editor Ian Knauer wrote in the July 2009 issue -- and that was after he'd spent nearly 9 years in the test kitchen there.

I'd wager he might be right. Testing and re-testing these ribs has made me more popular than ever. I've watched a lot of ribs get ravished and faces get glazed. Merrill's husband even offered me a job. 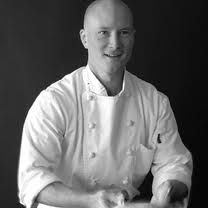 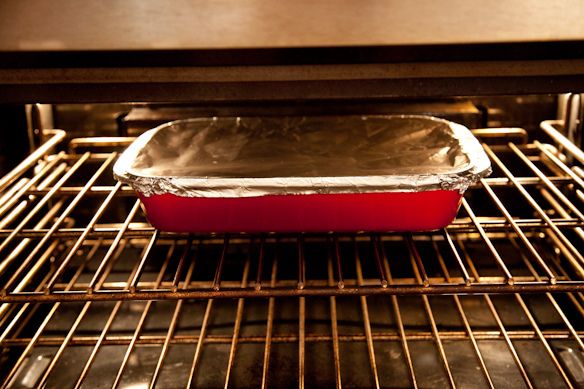 Knauer's first-bake-then-grill tactic isn't new to home-cooked ribs, but usually we're told to take it low and slow. Instead, Knauer goes for fast and reckless -- we're talking 425 degrees reckless. But baby backs are more tender than bigger spare ribs, and here they get amply marinated and steamed. So they come out surprisingly tender, yet sturdy enough to hold up to flipping on the grill (go too low and slow and you end up with meat falling to pieces and bones sliding out all over the place).

And unlike rib recipes that call for a long list of dried spices that come together mysteriously, this one requires only a handful of rather feisty ingredients -- and you know exactly what each one is doing there. Rosemary and garlic -- our friends in so many pork endeavors -- are the savory background; cayenne sharpens the garlic's sting. Balsamic and brown sugar bring the sticky, with the sugar leveling out the vinegar's sour. 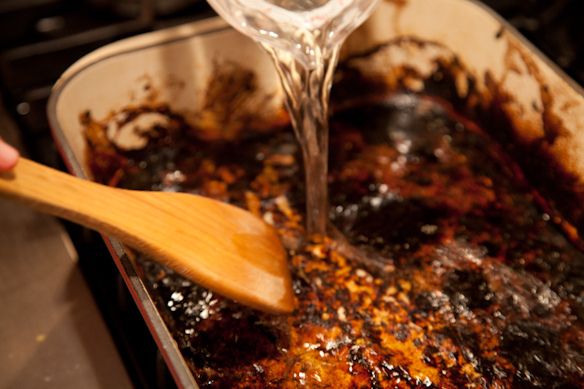 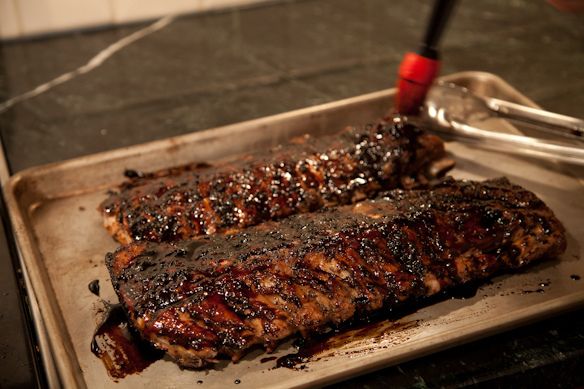 Purists will denounce the Yankee introductions of balsamic and rosemary and shake their fists. Some of you will balk: "Nothing compares to so-and-so's 10-hour smoky pit Hill Country ribs!" -- you're probably right. We should take a road trip there someday.

Meanwhile, this recipe can come out of any kitchen, anywhere. (Thanks to the 1990s, every grocery store in America carries a glaze-worthy bottle of balsamic.) And it doesn't need tending and coddling either -- leave that to old so-and-so.

For your next party to be a rib party, you just have to think ahead. i.e. Count two days backwards, commit yourself to schlepping home 8 pounds of ribs, and plan for a few passive stints in the kitchen. 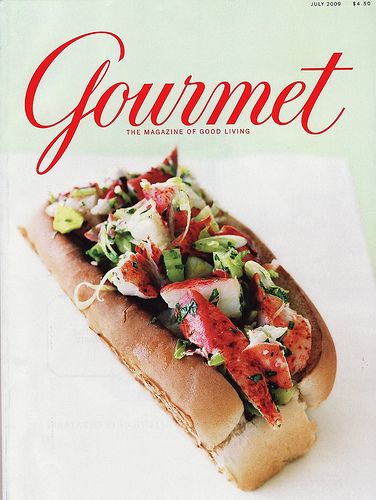 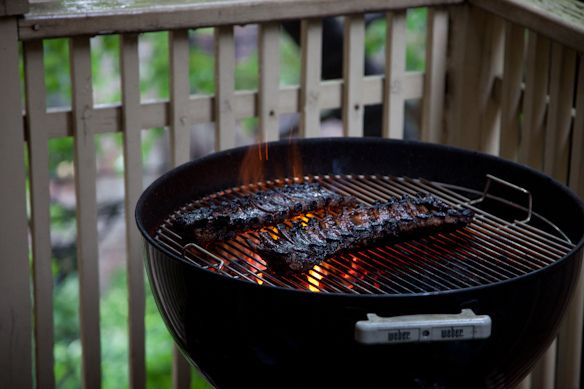 Night #1: Locate some ribs (call around to compare prices -- I recently paid a suspicious $9.99/pound, but that can't be right). Schlep on home. Mash up some garlic, mix it with a few other things, rub it all over your baby backs and pop them in the fridge.

Night #2: Stick the ribs in the hot oven to steam/roast while you watch exactly 2 episodes of Dexter on Netflix. Feel conflicted about the seductive meaty smells. When the ribs seem done (but before the meat smells turn to smoke smells), pinch them to make sure they're nice and tender, then set them aside so you can make your sticky balsamic glaze with the bits left on the bottom of the pan. (If your bits are a little blackened, don't worry -- this glaze forgives all). Pack up your ribs and glaze for party day.

Party Day: Drink beers, eat chips and carouse. When everyone's hungry, grill everything else (the ribs finish up fast and they'll get the grill all sticky anyway). Now paint your ribs with glaze and lay them on the fire for a few minutes to char and caramelize. Time to get messy with your friends! 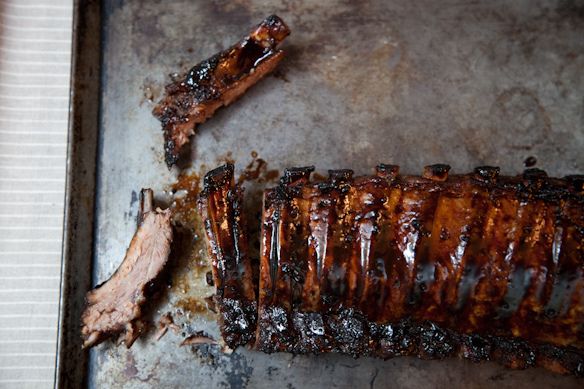 Diva's D. September 7, 2011
I'm not much of a fan of making ribs. They just seem so fussy for such a small bite, but I may have to make these for some of my friends. They look amazing!

Gato M. August 22, 2011
Made these last night and they were oustanding! Definitely the tastiest ribs I've ever made. May even be better than the 3 award-winning rib places in Richmond, VA! Our rib-lovin' friends seemed to agree. I added extra brown sugar, maybe 1/4 c. or so to the glaze. Will definitely make again and soon. Thanks.

ramblinbob August 21, 2011
I'm conditioned to believe that burnt is not a good flavor. Why are these black ribs different?

Hildee August 21, 2011
Hey Ian: Any chnace you can do the same recipe for BEEF ribs? If not how should I change it?

tduck August 21, 2011
This has been my go-to recipe since it was published, absolutely yummy!

Hildee August 21, 2011
Hey Ian: Any chnace you can do the same recipe for BEEF ribs? If not how should I change it?

Fairmount_market August 19, 2011
I'm excited to try this. I've always been put off by the slow cooking and tending approach as too much responsibility.

amysarah August 18, 2011
Love doing ribs this way. I don't think my original recipe was from Gourmet (was years ago and don't recall) - but it's very similar:

Marinated in dry rub overnight, then baked in a tightly covered pan with a little water - I throw in a couple of sliced onions too, and sometimes use beer or hard cider instead of water. It's like pre-oven-braising the ribs. By the time they finally hit the grill, slathered with bbq sauce, they're already falling-off-the-bone tender. The fire gives them that final hit of smoky, sticky deliciousness.

cookinginvictoria August 18, 2011
I remember when these ribs were first published in Gourmet magazine a few years ago. So glad to see them featured as a genius recipe! I haven't yet tried them, but I will now. They look irresistible -- especially that balsamic glaze,. Love this column and the recipes that you are unearthing -- I look forward to it every week.

wssmom August 18, 2011
Carousing definitely after this recipe! Thanks!

aargersi August 18, 2011
Let us know if you DO make that road trip to the Hill Country - we Central Texas Food52-ers will come say hi over some ribs! Meanwhile - am adding these to the To Try list

MrsWheelbarrow August 18, 2011
Genius. I can't wait to give these a whirl.

jkromm August 18, 2011
I'll definitely try these, but my favoriet sticky ribs can be prepared in less than 1 hour without a grill. Try the 12345 ribs from Irene Kuo's classic cookbook, The Key to Chinese Cooking.

EmilyC August 18, 2011
We usually do our ribs low and slow on our Big Green Egg, but you really have to set aside a lot of time to do them right. I love this streamlined version -- and can't wait to try these with a big mound of cole slaw on the side!