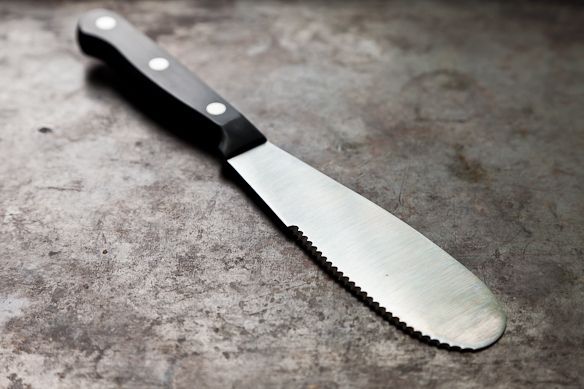 I have reached the age where thoughtful and clever gifts outperform the showstoppers. So I was tickled when my brother- and sister-in-law gave me a sandwich spreader (that sleek little tool you see above). On a family vacation, I had casually remarked that I liked the sandwich spreader that hangs on the knife strip. It has a wooden handle and like many of the tools in this kitchen, it had the character and stature of something that's been in service for generations. The sandwich spreader, with its cartoonish blade and exaggeratedly menacing teeth, charmed me; it's like the awkward teen in the knife family.

I come from a tradition of cooks who would think: who needs a spreader when you have dinner knives? But now that I've test driven the car, I can tell you that it is every bit as zippy as promised. A sandwich spreader scrapes hard butter into soft curls and can coat a piece of bread with mayo in a single swipe. It knows what it does, and it does it well.

The Wusthof Sandwich Spreader arrived the day before kindergarten began, the day before I would face years of lunch making. I would have seen this as an ominous sign had I known better. But soon I was in the thick of lunch making and searching for my spreader before even a cup of coffee. I've made some mean sandwiches with my spreader, and have enjoyed plenty of toast with salted butter (my reward for sandwich making). And now I have some ideas for you and your future sandwich spreader. Have fun in the trenches; I will think of you: 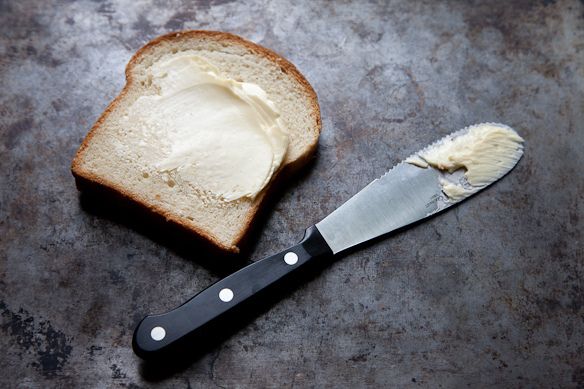 quadbob October 30, 2011
Here's another vote for the Cutco version. This handy tool does so much more than just put spread on sandwiches. Plus it's made in USA and carries a true lifetime warranty.

Burntoffering October 30, 2011
ok where do you get this gem?

Burnt O. October 30, 2011
My Uncle Bob gave me a beautiful set of six handmade sandwich spreaders made out of a wood (Walnut? Chestnut?) found on his farm ages ago. They are perfect in their size and shape. Not a day goes by that I don't use them for everything from spreading mayo to mixing compound butters, or for serving soft cheeses and hors d'ouvres. Uncle Bob passed away a few months ago - they are now a family heirloom that I treasure.

Gail H. October 30, 2011
This is most definitely a Cutco copycat. I switched from Wusthof to Cutco about 10 years ago; the products are just as good and Cutco knives are made in the USA.

Oh, as for the sandwich spreader, I use mine for all sorts of things. It even slices tomatoes or other vegetables for sandwich making with less mess.

nratt October 30, 2011
Count me in the me-too-Cutco group. Had it for years and use it almost daily for one thing or another, including slicing tomatoes, which it's great for, as another poster noted earlier. It was a good day when whomever invented this knife.

Waverly October 28, 2011
I have the Cutco version of this knife. It stirs sepparated peanut butter; spreads; cuts; and even ices (as Keely bee points out below) like no other. This great tool is as important to our crazy mornings as my expresso machine.

Keely B. October 26, 2011
Oh funny, that's what it's really for! My mom used ours for frosting cakes and cupcakes. spreading mayo and the like makes much more sense for that tool.

Ann M. October 26, 2011
I had a Cutco version, which slipped under my griddle one morning and the handle melted during pancake making. Cutco replaced it for free. It's one of my favorite knives. It's great for cutting tomatoes and getting thick natural peanut butter out of it's container. It's carried me through many years of lunches.

phyllis October 25, 2011
My sandwich spreader is about 30 years old and doesn't have teeth. Might be time for a new one. My birthday is in a few weeks!!

Blissful B. October 25, 2011
One of my favorite aspects of Food52 are the family stories. What a cool sibling & Mama moment. Thanks for sharing!

foglette October 25, 2011
My sis and brother-in-law sent me two sandwich spreaders a few years back, and think about them every time I use it. Thanks for the article.

wssmom October 25, 2011
Like Midge, I have an old Cutco model; it got my two kids through elementary school, junior high and high school! (Plus, like Midge says, it makes a great spatula-in-a-pinch!)

Midge October 25, 2011
I've got an old Cutco version and I love it for so many uses, including spatula in a pinch.

GiGi26 October 25, 2011
I also have an old Cutco version. I have used it for years! Sandwich spreader while my girls were growing up and now my grandchildren call it the "Bagel Knife." Used (as far as they are concerned) only to spread cream cheese on their bagels, Sunday mornings.

AntoniaJames October 25, 2011
Lest this not be overlooked, one of the nicest features of this spreader is the serrated portion of the blade, which is perfect for slicing tomatoes. No dinner knife can do that! Nor can you grab just exactly the right amount of whatever you're spreading, on that beautiful broad blade. I cannot imagine a kitchen without one of these. (Plus, you've given us all the perfect gift idea for commemorating the starting of school by the little people in our lives!) ;o)

mariaraynal October 25, 2011
I adore the concept of procuring the proper knife to commemorate life's stages, both big and small. Do I remember a recent pumpkin knife purchase, Amanda? I hope both will be in service for many great moments and generations to come.

MrsWheelbarrow October 25, 2011
My grandmother had one of those. Thank you for the memories. And the addition to my Christmas wish list!

mrslarkin October 25, 2011
whoa. that's like the ferrari of sandwich spreaders! I grew up with the sandwich spreader. Ours had a wooden handle, too, and is still in the same spot in the utensil drawer at my mom's house. I fondly remember long ago days of spreading thick swaths of margarine on toast with the spreader. Bought a new one for myself not long ago, but it's not the same. Maybe in 20 years it will be!