Today's lesson: how to coax out the riches of red peppers -- step away from the burner. 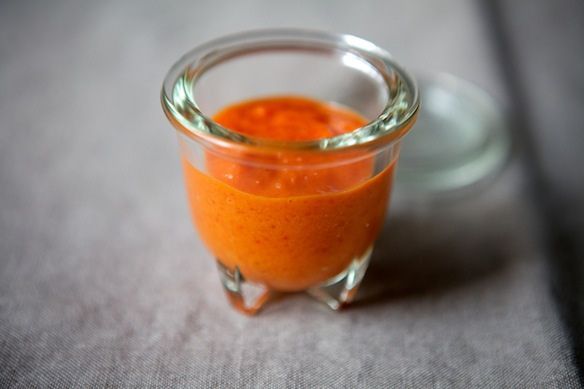 We all love doing it. When told to roast and peel a pepper, we go all caveman on the poor thing and char it directly on a gas burner on the stovetop. Because it's fast and vaguely dangerous, and when else in our modern lives do we get to stick food directly in fire and watch it burn? (Unless you happen to be in that uncivilized camp of s'mores-makers.)

But while it may be the more thrilling method, it is not the most delicious. The pepper lingers in the flames just long enough for the skin to burn and flake off, but stays close to raw inside. So it holds its shape well for recipes that call for it to be stuffed or cut into tidy slivers or cubes -- but it also hangs on to most of its water content, literally drowning out its own flavor.

A longer roast (or even broil) cooks the pepper until it collapses into a soft heap and the skin turns to paper. The flesh is intense and sweet -- much like what aged balsamic is to regular old vinegar. Don't believe me? Then listen to Amanda & Merrill. 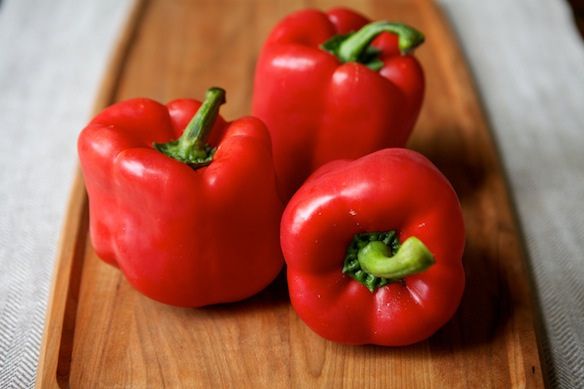 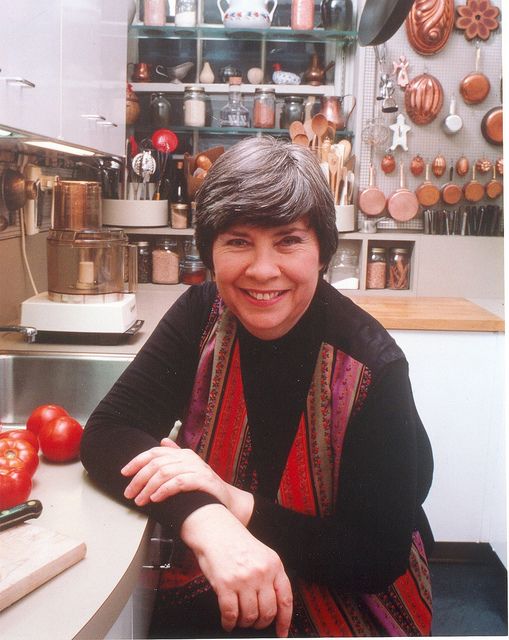 An especially exciting riff on the slow-roasted pepper came to me by way of creamtea, of the beautiful dilled corn salad. She tipped me off to a recipe (and transcribed it!) from cookbook author Jean Anderson, who, after traveling to Portugal 54 times in 25 years, rightly considered herself equipped to write the definitive book The Food of Portugal -- and apply a bit of modern ingenuity to the traditional massa de pimentão.

In Portugal, this sweet pepper paste -- a pared down sauce in the family of romescos and harissas -- is usually made by dry-brining strips of pepper in salt for several days, then mashing them up with garlic and sometimes other spices. But Anderson came up with a shortcut, letting a low oven do its magic. 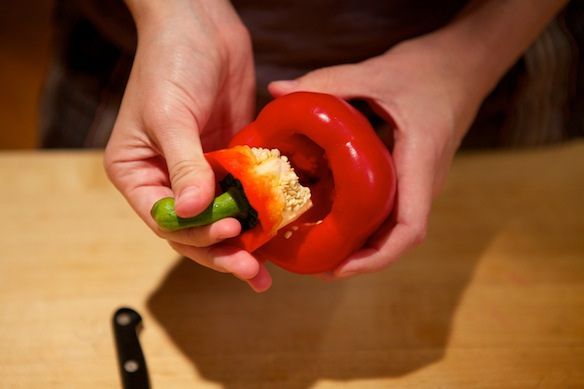 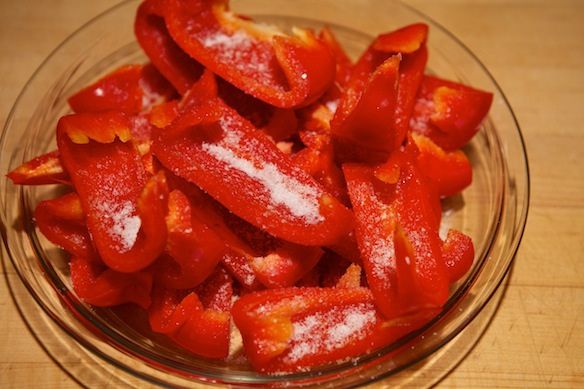 First you carve peppers into chubby strips, then layer them with salt and leave them out overnight. When you wake up, you'll come back to find them lying in a pool of salty water, looking dewy and relaxed. Through the wonders of osmosis, the salt has slowly but surely pulled a healthy amount of water out of the peppers, like a little veggie spa treatment. 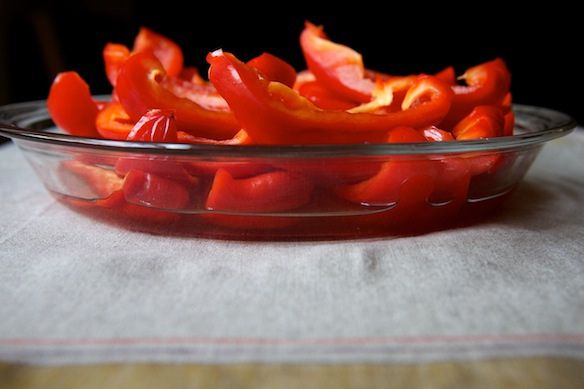 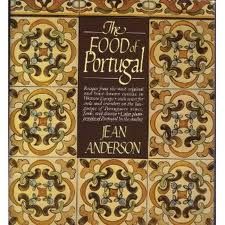 Just pour off the salty water and let the peppers sit again, this time in a 250°F oven for a couple hours. You barely even need to set a timer. Then, once they're soft and slippery, all that's left is to peel and puree them with garlic and olive oil. Creamtea summed it up perfectly: "4 ingredients plus a little time = bliss."

And the texture: it's silken red pepper whipped up with olive oil until creamy. Like ketchup, only sexier. 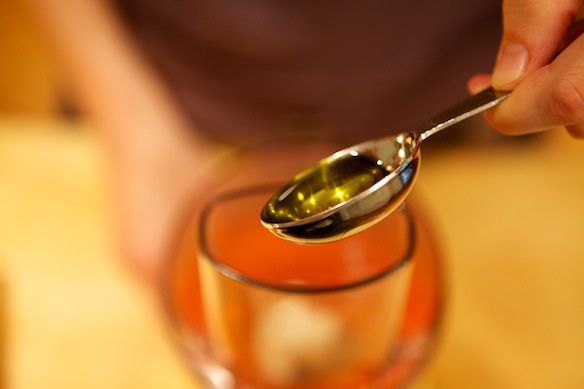 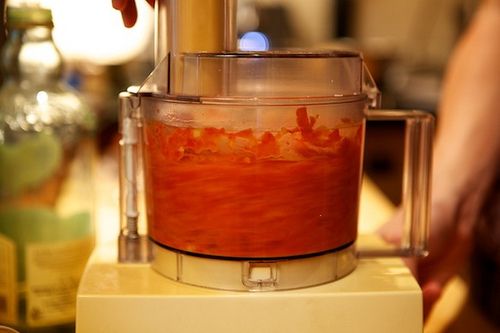 Just don't get impatient and haul them out of the oven too soon like I did on photo shoot day (there were other exciting things to crank the heat up for -- just you wait!). Cook them through and through, or you'll have teeny but perceptible shreds of pepper marring your puree. The bits don't really cause any trouble, but this sauce is best when it's milkshake-smooth.

Anderson tells us that in Portugal, the sauce is strictly used as a marinade -- so bathe chicken or a pork shoulder in it overnight, then grill or roast it up. But she, creamtea, and I have other ideas too. Use it as a dip for crudités or steamed baby potatoes, a spread for crackers, a sauce for grilled fish, a topping for pizza and sandwiches of all kinds, or even as the base for another sauce.

But my favorite is inspired by City Bakery's so-called salad bar, where I eat lunch more often than I should. They set out a basket of crostini painted with olive oil and a plate of sliced buffalo mozzarella, along with a little bowl of red sauce much like this.

I am a lover of salad, but no salad in this world could compete with a crisp piece of bread, topped with cheese, topped with sexy ketchup. 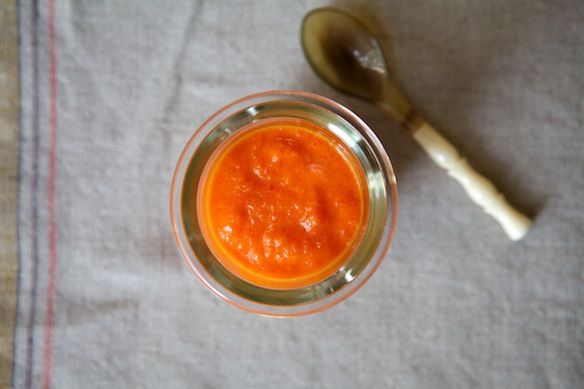 From The Food of Portugal by Jean Anderson

fiveandspice September 21, 2011
We had such a genius meal last night! I made this (like Drbabs, mine took at least 3 hours, but it was worth it) and slathered it all over brined grilled porkchops, then accompanied it with a side of Alice Waters' ratatouille. Yum, yum, yum!

drbabs September 20, 2011
Hi Kristen. I made this yesterday and, being me, I couldn't help but play around with it. I roasted a quartered onion and several garlic cloves in a foil pack along side the peppers--just drizzled them with a little olive oil, salt and pepper, and they roasted up nicely. I found that it took more like 3 1/2 hours in the low oven to get the skins to blister off. Also the larger pieces of pepper were much easier to peel than the smaller ones, so next time, I will try just cutting the peppers in quarters. They'll probably need more salting time, but that's OK.

I pureed the roasted garlic and onion and juices in the food processor with the peppers, and we ate it slathered on a baguette. Really wonderful. Thank you for a great recipe.

SFoodGeek September 19, 2011
I've made jars of this years ago for my part portuguese husband and it's fantastic! Thanks for reminding me about this wonderful condiment.

Chauncey September 18, 2011
I save most everthing you show in those beautiful little glass "egg cups"! Just because....
But, please include "storage" comments/advice! I cook for one, but most recipes, especially condiments, seem to serve much more more.

creamtea September 22, 2011
Hi Chauncey: It makes quite a lot. I usually serve it to a table of 6 or 8 adults and kids with plenty left over. I have tried to store it for a couple of weeks, but it doesn't last that long. I have made half the recipe with success and had plenty for my usual guest list. You can probably whittle it down even more, for one or two people, or store it probably up to a week.

Chanteclar September 18, 2011
I have ordered my egg coddler from Divertimenti in the UK. They come in 3 sizes - like the three bears. I'm waiting to see how awful the mailing charge will be. I think they will have to be my birthday present to me. ; ) Chanteclar

TheWimpyVegetarian September 17, 2011
This looks so good that I need to make this over the weekend. Genius indeed! And love the "veggie spa treatment" phrase. Perfect! Thanks to both Kristen and creamtea!

Kristen M. September 17, 2011
Thanks Chez! If only the same treatment could work on us humans.

creamtea September 22, 2011
You're welcome, so glad to share this deserving recipe!

Kristen M. September 17, 2011
Here are a couple ways to get them from the U.K. -- I don't believe we've come up with a U.S. source yet:
http://www.connox.com/categories/cooking/cooking-and-backing-dishes/jenaer-glas-wagenfeld-egg-coddler.html

haapi September 16, 2011
Along the same lines is the harissa I make based on Ottolenghi's recipe. (The recipe could probably be found online?) Roast whole peppers for a few hours, skin them and blend them up per the recipe. It is sublime.

Kristen M. September 17, 2011
That sounds amazing. I did try this recipe with whole fresh peppers roasted at 400 (without salting first) and it was delicious, but the salting step did seem to help concentrate the color and flavor a bit (by getting rid of a lot of the water up front).

creamtea September 22, 2011
I like that word. I had scribbled "divine" years ago in my copy of The Food of Portugal under the "Massa" recipe. In case I forget.

EmilyC September 16, 2011
This recipe is so intriguing and looks wonderful. Thanks Kristen and creamtea for sharing it with us!

creamtea September 22, 2011
You're so welcome. Thanks Kristen for testing it out!

Fairmount_market September 16, 2011
This looks amazing. I'm tempted to try it with a combination of red and yellow peppers for a Crayola yellow orange or orange yellow version.

fiveandspice September 15, 2011
I was starting to feel downright besieged by the number of peppers we've been getting from our CSA. But, now upon seeing this, I'm suddenly keeping my fingers crossed that we get more!

Kristen M. September 17, 2011
Lucky! My CSA has only had rather wonky-looking peppers, but made up for it by bombarding us with stone fruit.

WCmom September 15, 2011
This is why I love this website!! I am making this tonight, thanks so much for sharing.

Bevi September 15, 2011
Yes - the jar. I think I have to put that on my Holiday gift list. This is so beautiful. Low and slow oven preps are about my favorite thing about being in the kitchen.

Kristen M. September 15, 2011
Isn't it a lovely feeling to know that you don't have to babysit the oven? For me, not setting a timer at all is risky, but it sure is tempting.

Anitalectric September 15, 2011
Thanks for sharing! I love the backstory.

ashleychasesdinner September 15, 2011
I can't wait to try this! Sounds fantastic!!

Kristen M. September 15, 2011
It is bliss, especially when it's perfectly smooth.

fiveandspice September 15, 2011
OMG, yes! Make a profile for the egg coddler and post it! That would be hilarious.

mrslarkin September 15, 2011
that is a brilliant idea!