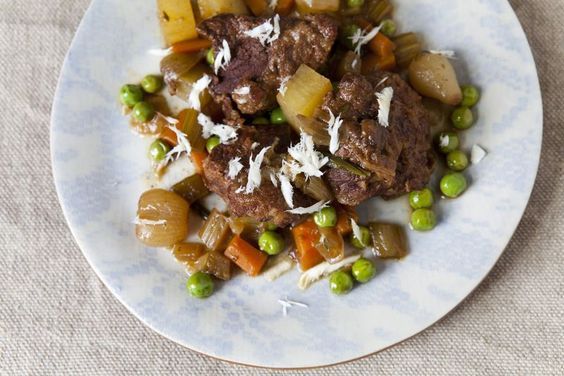 Like many Americans, or humans, I do not find work the best part of my week.

That’s not to say I don’t enjoy spending my days trying to suss out exactly who is trying to end Medicare as we know it, or pondering the relative merits of the 16 individuals running for the second Congressional seat in Utah. But all things considered, I’d rather be planting Thai basil.

Exception alert! Once every other month or so, a group of us get together at the office for a lunch time potluck. Sometimes we exchange cookies (December) or cook dishes composed of three ingredients picked blindly (March). Or, we just cook whatever.

There is zero professional hierarchy at food club -- the big boss was once shut out because he failed to make his dish, and the youngest colleagues often make the meanest soups. People who fight bitterly over semicolons and filing times during the rest of the month are the warmest of buddies when bonding over proper pie crust methods.

During these all-too-infrequent lunches, my colleagues and I discuss what we are eating, what we once ate, and what we hope to be eating someday soon. Work life, for an hour, fades to blue.

A newcomer once attempted to rehash the McCain campaign of 2008, and was shown scorn. Food club has no room for office gossip, or chatter about current events, because we could all be doing that back at our desk, with a sad bag of ginger snaps from the vending machine.

This month, we all were charged with making a dish inspired by a book. Pressed into the reading The Hunger Games by my 13-year-old, I happened upon lamb stew. As the title indicates, people are hungry in this novel, and those who are offered hearty stew become exceedingly pleased.

While the book’s stew involved plums, I chose my inspiration from New Mother's Magic Elixir (Lamb Stew) because the recipe just read satisfying and warm, something I’d probably fortify myself with before running off to the woods to ice my peers.

If you start with the very best lamb you can get your hands on, you’ve won half the game. Sear your meat, not crowding it -- I doubled this recipe and you should too because you will want some to freeze. Then come the veggies, and then your herbs complete with the secret, magical ingredient: star anise. You must have this to make it. No. No. You can’t substitute. Stop asking me.

I did use a Chianti instead of Cahors if that makes you feel better. But you should probably use whatever wine MrsWheelbarrow says. She knows things.

If you run out of time after you’ve been cooking for a while, add the potatoes later, as I did. I also threw my peas in the hot mix and they “cooked” in the dutch oven in the back of my car just fine as I made my way to work.

When lunch time rolled around and we settled into our seats in the well-worn, dank conference room, S.S. and J.C. began by reading from Moby Dick. We all tucked into their respective chowders and deadlines, smart phones and pests of all nature faded.

A young news clerk told us about her delicious chocolate chip cookies, inspired by a favorite childhood picture book and served with ice cold milk. A.P. waxed about E.B. White and H.C. served up a Bloody Mary (at lunch! during the week!) and read dramatically from Twilight. S.M. spoke of Russia. We ate eggplant and curry and banana jam and apple crisp and a thick toffee pudding. We read some more.

And then, we washed our dishes and went back to work.

CarlaCooks June 2, 2012
There is actually a cookbook based on the Hunger Games book! There's a pretty funny story about the author trying to get her hands on squirrel meat for the cookbook :) http://www.amazon.com/The-Unofficial-Hunger-Games-Cookbook/dp/1440526583

Kitchen B. May 23, 2012
This looks wonderful and what a wonderful idea to have office potlucks. As it is....I am growing Thai Basil (in Nigeria) and it is doing very well. Wish I could send you some
Author Comment

Midge May 22, 2012
What an awesome idea for a potluck. Lamb stew is one of my favorite dishes on earth and I can't wait for some cool weather to give MrsW's version a try.
Author Comment

phyllis May 22, 2012
I've cooked this recipe and loved it. In fact, this and Dorie Greenspan's lamb curry are currently my favorite comfort food lamb dishes. Thanks for the story, Jenny. I love the rules. .
Author Comment

I sometimes omit the figs if I'm out an have everything else. I generally use a boneless leg of lamb that I cut up. Enjoy.

mrslarkin May 22, 2012
Love the idea of a potluck club. Perfect choice, this lovely lamb stew. Will be trying it very soon.

There are a few Hunger Games-inspired recipes by Fig Test Kitchen I've been dying to try. Here's one: http://www.food52.com/recipes/17043_lamb_tagine_with_plums_and_almonds

MrsWheelbarrow May 21, 2012
Thank you, Jenny, for writing about, and making, this recipe. I've always felt it was a panacea.
Author Comment

drbabs May 21, 2012
My stepson and daughter in law just had a baby on the 14th. I think I will make this stew for them this weekend. Thanks! And love your writing as always. Xo
Author Comment

boulangere May 21, 2012
Love the no gossip, no shop talk rule. That alone makes anything taste sweeter. Also get the star anise rule.