Today: The perfect strawberry shortcake for Memorial Day (and all berry season long) -- thanks to an odd secret ingredient. 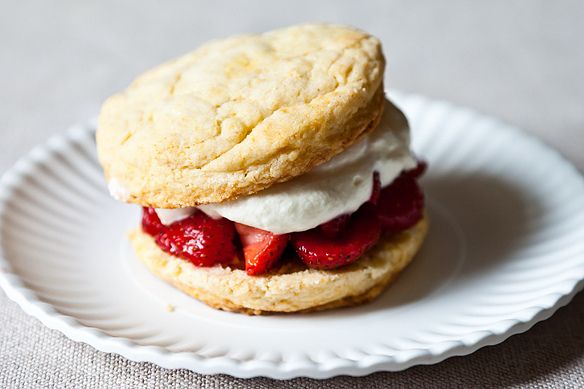 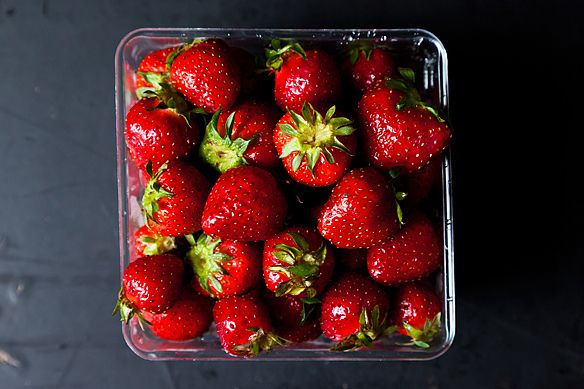 The late cookbook author James Beard -- you know, the father of American cooking -- learned this trick for a tender, airy cake from his mother: Egg yolks.

Not so strange, right? But here's the kicker: they're from hard-boiled eggs. 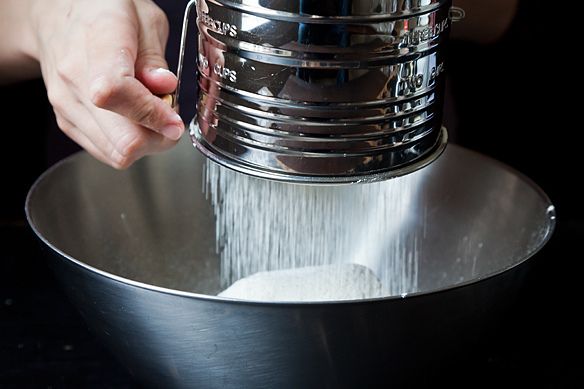 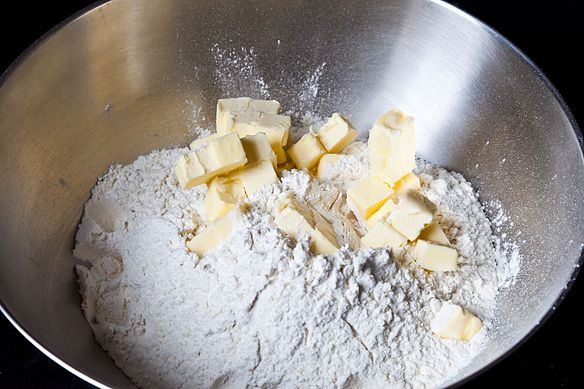 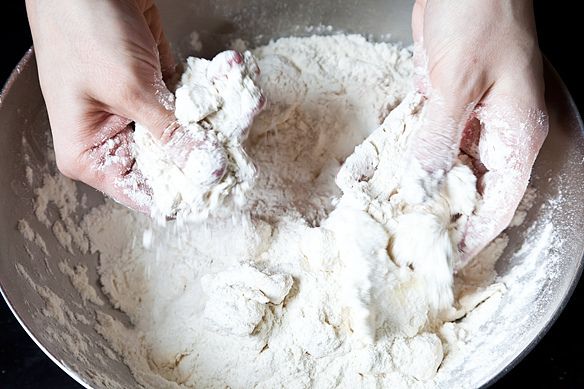 It might sound like one of the last things you want stirred in with your dry ingredients, but crumbly cooked yolk adds just enough richness without weighing down or gumming up the dough.

This also means it's more forgiving. You needn't be on edge, worrying you'll overwork the pastry. No tough cakes here: you've got insurance. And it looks like this: 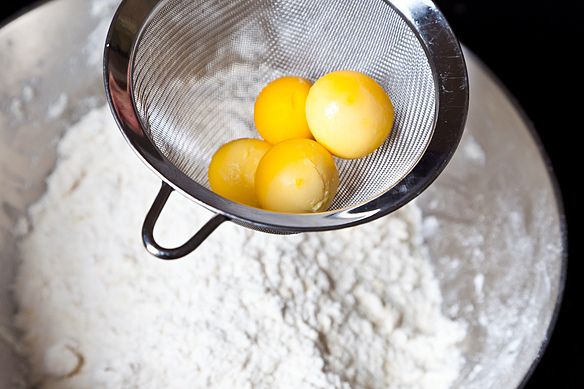 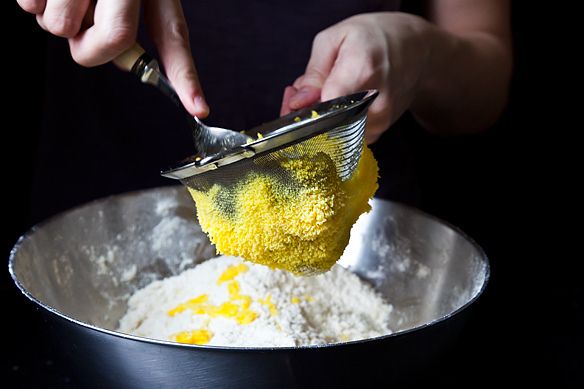 James Beard is no longer around for us to quiz about this method, but it's become a popular technique among other cooks who love their shortcakes, so we can ask them.

In The Pie and Pastry Bible, Rose Levy Beranbaum relies on hard-cooked yolk for her biscuit dough. In an email, Beranbaum explained, "It adds a beautiful golden color and velvety tender texture." And, she adds, "unlike raw egg yolk, it does not get absorbed into the flour" -- a plus for keeping it light. 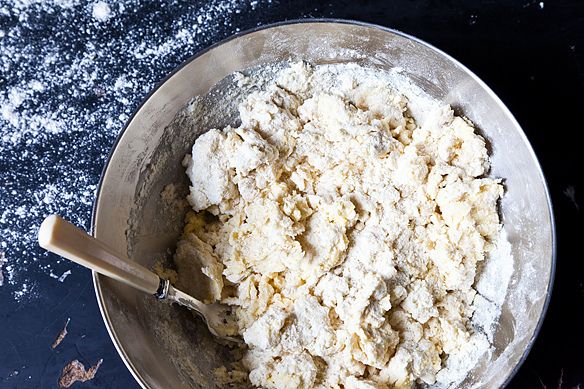 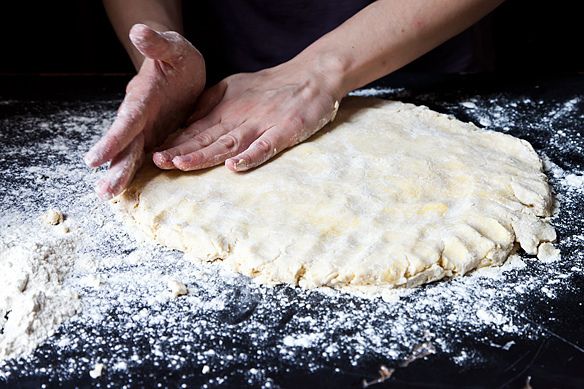 Because the fluffy yolk floats freely in the dough, food scientist Harold McGee wagers, "I imagine that it would give you a shorter, crumblier texture than you'd get by spreading the yolk proteins and fats evenly through the dough." And it does indeed -- the crumb is fine and delicate. 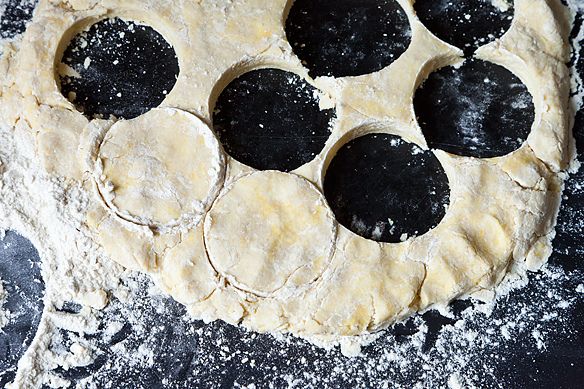 Knowing how old recipes work, it's likely that the technique was around before even Beard's mother's time. But the Beards' version is a very good one, and has since been handed down from chef to chef.

Pastry chef Claudia Fleming swears by it -- she picked up the trick from the first chef she ever worked for, but Fleming says "She wasn't much for sharing info, so I don't know where she learned it from." Russ Parsons -- L.A. Times Food Editor and shortcake buff -- is a fan too. 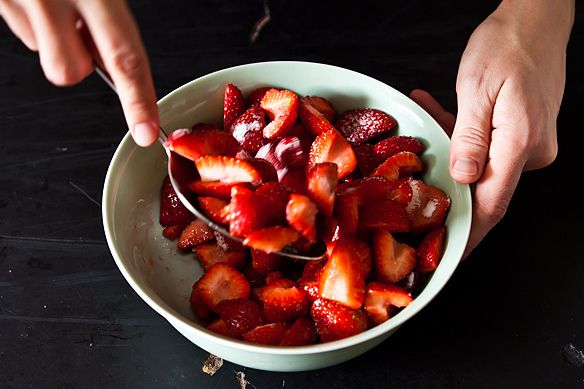 In recent years, it's even popped up in the pastry curriculum at the French Culinary Institute -- an impressive pedigree for what was once just a clever home cook's trick.

In other words, yes, there's one extra step: you have to boil a few eggs. But it's worth it. Plus you get a healthy pre-shortcake snack out of it. (What else are you going to do with those leftover cooked egg whites? Make a tiny egg salad? No, just eat them.) 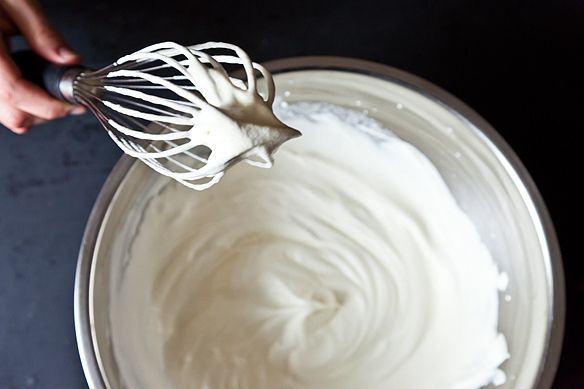 For some reason, in his twenty-plus cookbooks, James Beard never published his mother's shortcake recipe himself. Lucky for us, he saw fit to share it with his friend Larry Forgione one night as the two were relaxing and talking food at Beard's townhouse.

Forgione put the recipe on the menu at his iconic New York restaurant An American Place, brought it back every strawberry season, and later published it in his cookbook of the same name.

As Forgione tells it, Beard believed "there can be no dessert better, only fancier." Taste his version, yolks secretly threaded through, and you're likely to feel the same. 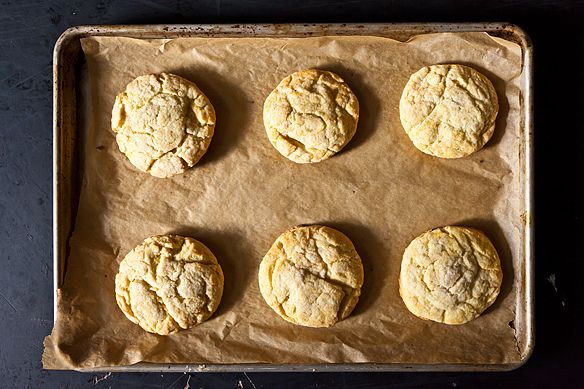 From The James Beard Foundation, adapted from An American Place by Larry Forgione (Morrow, 1996)

For the strawberry filling:
3 pints fresh strawberries, washed, hulled, and halved or quartered, depending on size
2 tablespoons sugar

JanieMac July 4, 2015
I live in Ireland and find many American baking recipes fail because the flour is so different here. I just tried ANOTHER shortcake recipe and am still getting no lift - more the texture but not the richness of shortbread. Anybody in the UK cracked this problem? Or should I just make rich scones?

donna J. June 2, 2015
Going through piles of old Natural History magazines and came across Raymond Sokolov's 10/85 adaption from A Celebration of James Beard. The following link shows the recipe: http://kitchenproject.com/history/Strawberries/StrawberryShortcake/JamesBeardsStrawberryShortcake.htm

gingerroot April 25, 2013
This has become my go-to entertaining dessert. They really are perfect. I've used strawberries, nectarines, mangoes, even blueberries (we cooked the blueberries just a bit so they'd have a bit of body). My five year old son even requested these for his birthday.

AntoniaJames June 16, 2012
I knew when I read this blog post that I'd seen somewhere a James Beard pastry crust recipe using hard cooked egg yolks. I found it today . . . . Beard's recipe for a "rich pastry crust" in a gem of a small spiral bound cookbook written by him, included with the Cuisinart I was given in 1979. ;o)

MarkOw June 2, 2012
Any way you could hard boil the yolks without the whites, and save the whites for meringues? Sounds pretty left field but this whole hard boiled egg idea does!

witloof May 27, 2012
The hard boiled egg yolk is a classic in German and Viennese baking. Many classic cookie and pie crust recipes from that part of the world call for hard boiled egg.

AntoniaJames May 29, 2012
Yes, I have used hard cooked egg yolk over the years in the Linzertorte from Joseph Wechsberg's and Michael Field's wonderful "The Cooking of Vienna's Empire", but it has never occurred to me to use it in a biscuit or shortcake dough. I'm having one of those "why haven't I thought of this before?" moments. ;o)

orlenda May 27, 2012
wow-sounds interesting! you could also offer the egg whites to many types of pets-birds LOVE egg! box turtles too-and hamsters as well! just a thought!

Hilarybee May 27, 2012
This is a great technique with the hard boiled yolk! I first learned about it in a cooking class in London, being used to lighten up scones. Not that much different than shortcakes in my opinion.

btglenn May 27, 2012
I was curious to find how much richer the above Beard recipe is from the one I have enjoyed from "The James Beard Cookbook" originally published in 1959. This recipe is one that was traditionally followed, using an enriched biscuit dough for its base, to prepare a simple, delicious, and far less caloric summer desert than the one listed above. No eggs to boil In fact, no eggs at all.
Bear's Strawberry Shortcake Recipe:
"Wash, hull, and crush slightly 1 qt. of strawberries (for 4 persons) [reserving some for garnish.] Make a shortcake (page 62.) Sugar the berries to taste and serve them on the shortcake. Top with whipped cream or pass plenty of unwhipped heavy cream.
The Shortcake from page 62:
2 cups of flour; 2 1/2 tsp. of double-acting baking powder; 1 tsp. of salt, 5 tsp. of sugar, 5 tbs. of fat; 3/4 cup of heavy cream.
After you have turned out the dough and kneaded it for a minute, divide it into two portions, one a little larger than the other. With a lightly floured rolling pin, roll the larger portion of the dough into a circle about 9" across and 1/2" thick. Roll the smaller portion into a circle about 7" across and a little less than 1/2" thick.
Grease a round baking pan and place the larger circle on the bottom. Spread it with soft butter and top with the second circle of dough. Bake at 450° until nicely browned and cooked through, about 20 minutes.
Remove the shortcake to a serving place, and using a spatula, take off the top circle. cover the lower half with sliced or crushed sugared strawberries. Replace the top circle and garnish with sugared whole berries. Serve with heavy cream or whipped cream.
Beard notes: For a very special flavor, add a little Grand Marnier to the strawberries when you crush them.

saltandserenity May 27, 2012
I just learned about the magic of hard boiled egg yolks in dough last week! from baker Anna Olsen on the Food Network! According to my research, it was French Pastry Chef Pierre Herme who first documented their use. probably something his grandmere used to do in her country kitchen.
I added a hard boiled egg yolk to my pate sable (sweet pastry dough) to make Rhubarb Curd and Strawberry Tart.
http://saltandserenity.com/2012/05/21/rhubarb-curd-strawberry-tart-and-some-surprising-discoveries/
The dough was so easy to work with and the taste was fantastic. I am a hard boiled egg convert now and can't wiat to try it in shortcake. Thanks!

Jane E. May 27, 2012
I have made this one before and it's terrific. I also think James Beard's lemon meringue pie is the best ever, as long as we are on the subject of classic American desserts. AND speaking of lemon desserts, thanks you so much for including Lemon Posset in your wonderful cookbook (and congratulations on the award--wow, two years in a row). I snarfed that dessert up every chance I could get in a restaurant in Oxford last winter and am happy to be able to reconstruct it at home.

stephanie May 26, 2012
I used to work for a pastry chef who was taught by one of the chefs mentioned here....so we made our shortcakes this way at that restaurant, and i make them this way at home, too. Fabulous!

AntoniaJames May 25, 2012
On the menu for a special dinner tomorrow night! It's so nice, too that you're giving James Beard some love. One of my favorite cooks, and writers, ever. ;o) P.S What to do with the egg whites? Smear on a tiny dab of horseradish mustard and sprinkle on some dukkah! Oh, yum!

aargersi May 25, 2012
PERFECT timing! I have been poring over shortcakes all week, and now I am going to use this method for a tart I am making this weekend - and we have eggs boiled and ready! THANKS!!