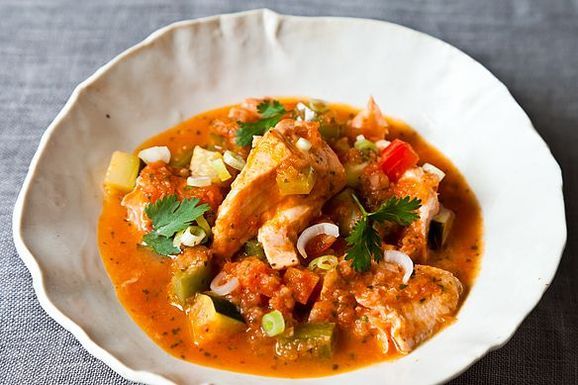 When I brought my leftovers to work one day and told my colleague H, who inquired about what I would be re-heating, that I had made Salmon Moqueca she immediately announced, “Oh it won’t be any good.”

Another person might have decided to be insulted -- especially the likes of us for whom lunch is the best part of the day and are not particularly pleased to have their quiet ritual with a white bowl and a salt shaker marred by actual conversations with their colleagues, particularly ones in which the food in question is denounced -- but with H, I take such comments in stride.

I knew what she was really doing was asking for a hearty spoonful for her own bowl, because you can see just by looking at this dish, a Brazilian seafood stew, that it is divine. You know how there are weeknight dishes that you make that are perfectly, pleasingly good? That’s fine, right? And then there are those that are restaurant-quality delicious, so inspired, so flavorful, that your entire family sort of stares at you with a bit of awe, unaware of how simple it all was?

First, start with good salmon. I know you knew that. Then puree up your marinade, which is going to work just fine sitting for 30 minutes while you cook up your stew. (I used a cayenne pepper from my freezer from last summer FYI. Do as you like.)

Don’t get mad because I am asking you to use sweet potatoes in July. You can find some. The mix of sweet potatoes with salmon is going to be uncanny and then you will stop cursing me and go back later to your mulberries or whatever seasonal thing you want. I did not include bell peppers because they make me very angry. I used more potatoes and zucchini instead. To each cook her own.

Do you see how this is all simmering very quietly and carefully as you continue to add things one by one? (I did not have fish stock so I used water.)

Now it is time to add the fish, which you cut up into bite sized chunks as you toss it into the stew. If you have no green onion, who cares?, but you do want the cilantro. Unless you hate it. There is something really complex and rich and exciting about all these flavors – the sweet coconut and the potatoes with the slap in the face of cilantro and a bit of hot pepper, all dancing around your fish – that you are going to love. Put it over rice for a one-bowl meal. Reheat at work, first taking the fish out (so it won’t overcook and to not create the odor of fish in the office, if there is anyone there whose opinion you care about) and stirring it in after you have nuked.

As it turns out, moqueca is also common in Liberia, where H grew up, where it is cooked with palm oil. She told me once when she landed in Brazil, she could smell this dish cooking and it reminded her of home. She dissed my version before tasting it, because she assumed, as most of us do concerning childhood dishes, that an outsider’s version will disappoint.  Mine didn’t take her to Africa, perhaps, as only mom’s can. But H conceded, it was really damn good. She wanted more. Too bad. I ate it all.

Candi March 26, 2013
I made this last night. It was delicious! Next time I am going to add shrimp.

Shalini July 22, 2012
Jenny, I'm going to try this this week. I love red peppers, but we almost never use green! And Winne, congratulations!

Phoov July 22, 2012
Used frozen salmon from Costco and it turned out great. Hubby loved it. Replaces my old fish stew recipe which used a white fish. Salmon is a much healthier alternative.
Used a red and a yellow bell. Not a big green fan. Thought 2 bells would be too much, but with the milder bells that was not the case.
Easily 6 servings. I made it for just two of us and it was just as good or better the next day. Popped the remainder into the freezer.

eichenholz July 19, 2012
I didn't use any water and added a splash of fish sauce when I added the coconut milk. It was beyond delish!! Used thick pieces of salmon and left them big, really pretty as well as wonderful.

NYNCtg July 15, 2012
I just made this for supper. Thank you. My husband says he is looking forward to having the leftovers for lunch tomorrow and that is the highest praise he gives any dish.

bonbonmarie July 15, 2012
Relieved to hear I am not the only one who has to figure out a response to coworker's comments about my lunches! Darn it, it's not "health food", it's just real food! Anyways, I cannot wait to try this recipe. Thanks!

Hoots July 15, 2012
"I did not include bell peppers because they make me very angry."

A woman after my own heart!

WinnieAb July 11, 2012
How cool is this? A bit late on the uptake here, but thanks so much for featuring this recipe, Jenny.
Reminds me that I have not made this in forever...need to change that soon!

mcs3000 July 9, 2012
Happy to see this is one of @winneab's recipes. Discovered her blog earlier this year (yes, last person on the planet to do so) and love it.

Sorry to butt into this thread, but, Merrill, how's Clara? And we need an updated picture, stat.