All week, the folks of Beaver Brook, a stretch of rural woodland in upstate New York, are cooking up a Farmer's Market feast -- without electricity or running water.

Today: Cassie tells us about the prep work for the Big Feast. This is the third installment of the Beaver Brook Big Feast -- check out their first two, A Weekend in the Woods and A Trip to the Market. 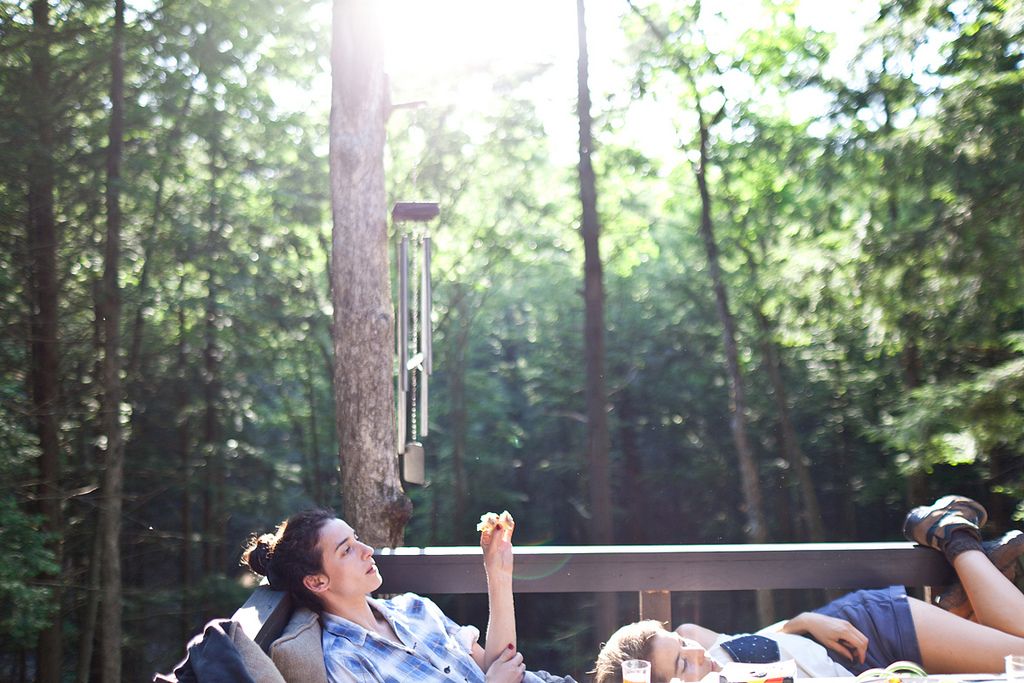 We tackle meals at Beaver Brook in the same way we do everything else: rigorous planning in theory, reckless abandon in execution. We learned long ago that no amount of lists made or emails sent in advance will prevent them from descending into a joyous free-for-all based on what we have on hand and what's in season. Extra thyme will be substituted for oregano, garlic will be added to everything, lemon slices will end up on this or that, and a five-spice blend will be swapped in for pepper, resulting in a magical Frankenstein of a main dish that, albeit having strayed far from original intent, remains soulful, satisfying, and a memento to the very specific moment in which it was made. Every meal becomes its own, special memory, with the best of the best being so oft-referenced that they become near mythical. Apparently, somebody once made a lamb stew out here. If you hang out with anybody at Beaver Brook ever, you will hear about this lamb stew within five to seven minutes. I guarantee it.

The one thing that nearly every dinner has in common, though, is total submission to circumstance. Since there is no electricity, and lighting is severely limited once the sun goes down, we do our best to have the work day wrapped and food preparation completed by twilight. Ingredients lean toward the seasonally available, as already mentioned, and almost all cooking centers around the rotating use of two extremely essential utensils: a grill and a pair of sturdy, well-loved Dutch ovens. We'll put literally anything into a pot or onto the grill, even stuff that decidedly does not belong there. (FYI: a Dutch oven crumble can be ridiculously difficult to master, we've come to calling ours "Hot Fruit Soup" in resignation.) Generally, though, these tools are ideal because they require little more than time and some basic technique to deliver a thoroughly satisfying meal. Plus, the thick haze of mouth-watering aroma they emit throughout the hours leading up to dinner? That's just a bonus. 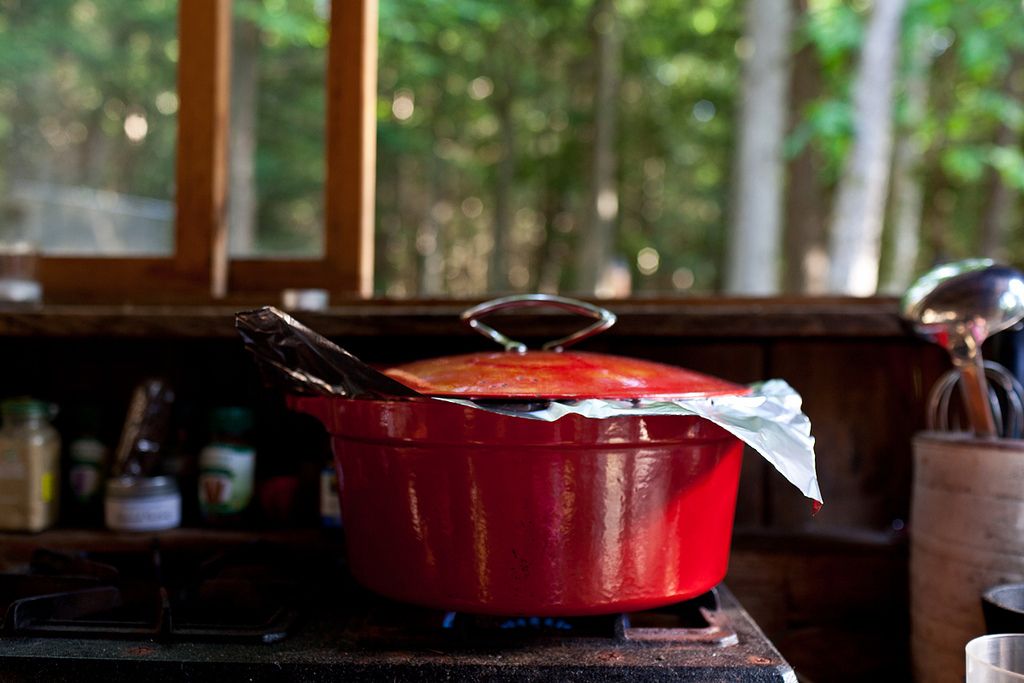 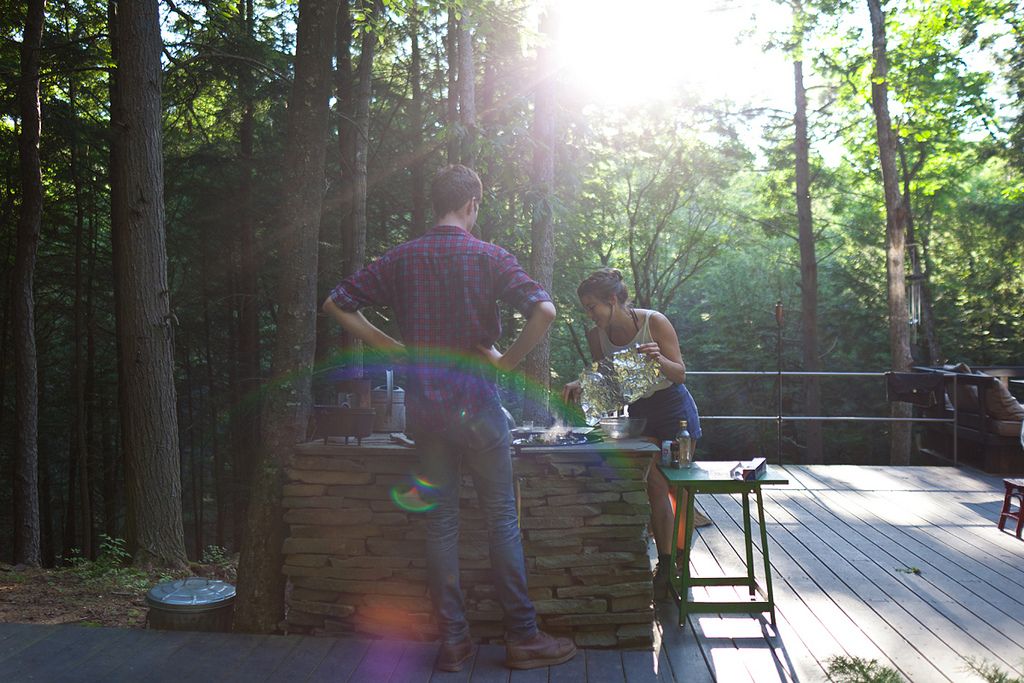 When it comes to mealtime, somebody from the group always emerges as a natural leader. This can be for a variety of reasons — perhaps they have a particular craving for something, and the best way to get it on the table is simply to make it, or maybe they just have more free time. Once a weekend's Head Chef has been informally declared, though, everybody else falls happily into line. They'll peel, chop, marinate, make salad dressing, or whatever else is needed. After all, when the end game is a delicious meal, there's little desire to ask questions, and everybody is excited to feel like they've made a whole-hearted contribution.

This Saturday, it's Brian and Grace who are our ringleaders. As a pair of the Brook's longest standing residents, there's no question they know what they're doing, and the rest of us are eager to defer to their expertise. Prep gets started around 4pm, and the light is with us. At this time of year, it's liquidity is tangible. It pours through the trees and over the front porch, flushing us with warmth and dappling the wood with restlessly moving shadows. The effect is one of a certain, woozy grace — even with no particular plan, we step into quiet rhythm. First up, unpacking our ingredients and laying them out on the table. This is how we'll get a feel for the way they can all fit together. 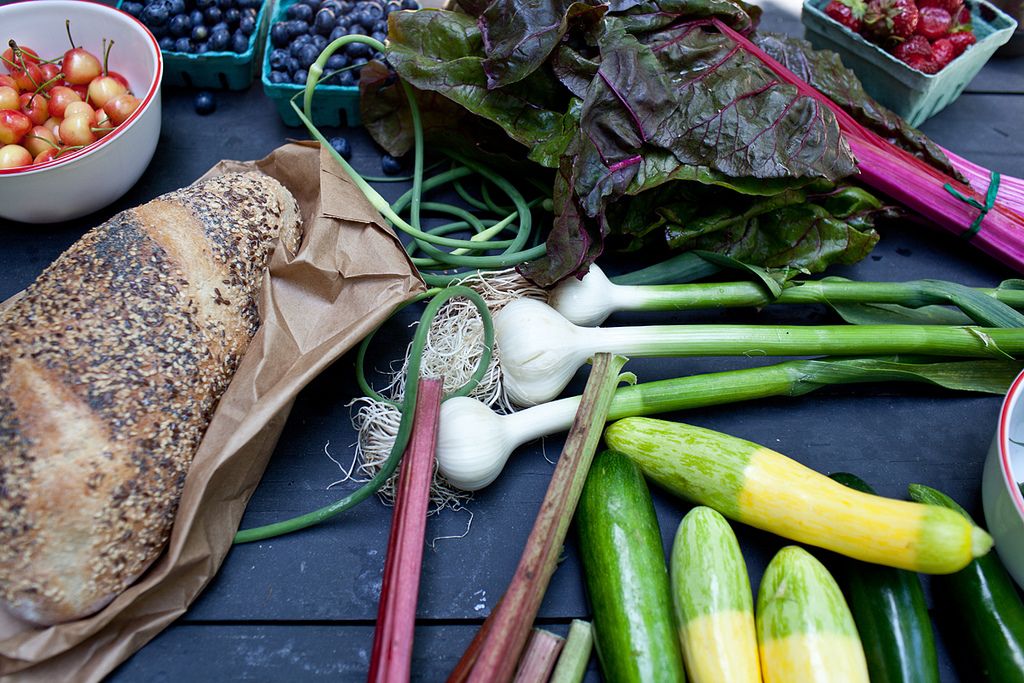 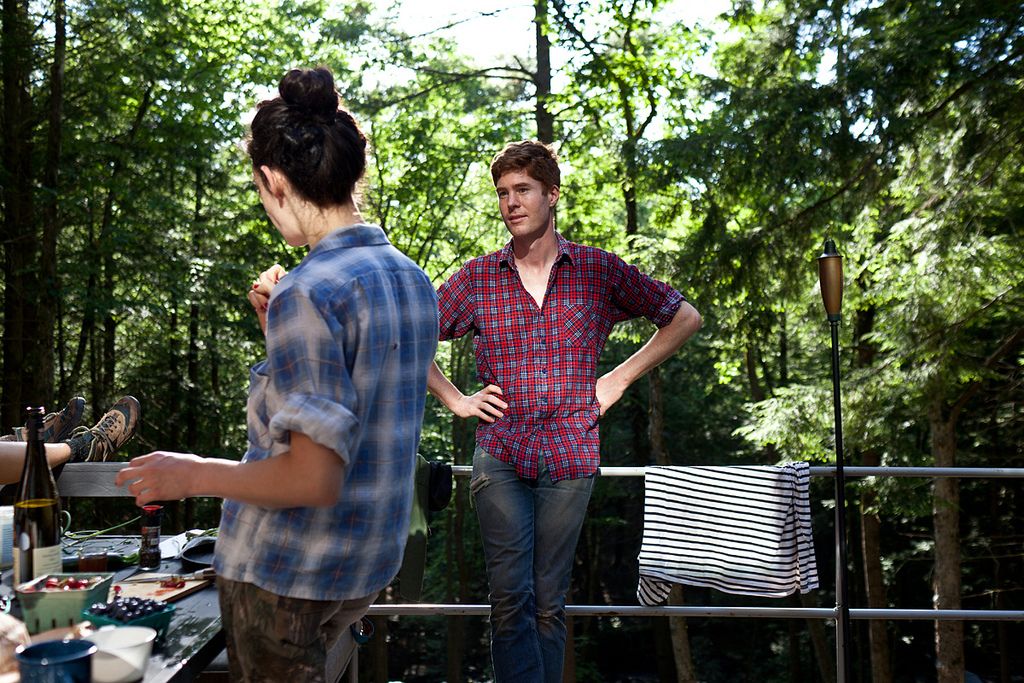 Our final stockpile, once combined with the odds and ends each of us have brought from home, consists of chicken, chard, zucchini, rhubarb, sweet potatoes, just ripe avocados, fresh yogurt, stalks of fresh garlic, bread, seemingly unlimited quantities of fruit, fresh herbs snipped from the small garden behind the cabin, and lemons. After a moment's admiration and a bit of reflection, Grace and Brian start calling dishes out. "Saute the chard in white wine and garlic and throw it on the grill? Slice the zucc's and potatoes and toss them in oil?" Perfect. We all set to work, shredding chard leaves from stems and dicing away, splitting garlic bulbs open and lingering over the intensity of their fragrance before mincing them, grinding hearty portions of pepper over everything. For a while, we debate the proper use of garlic scapes and compare the benefits for a tried-and-true uses with culinary experimentation. Experimentation eventually wins out, and we prep them for the grill. 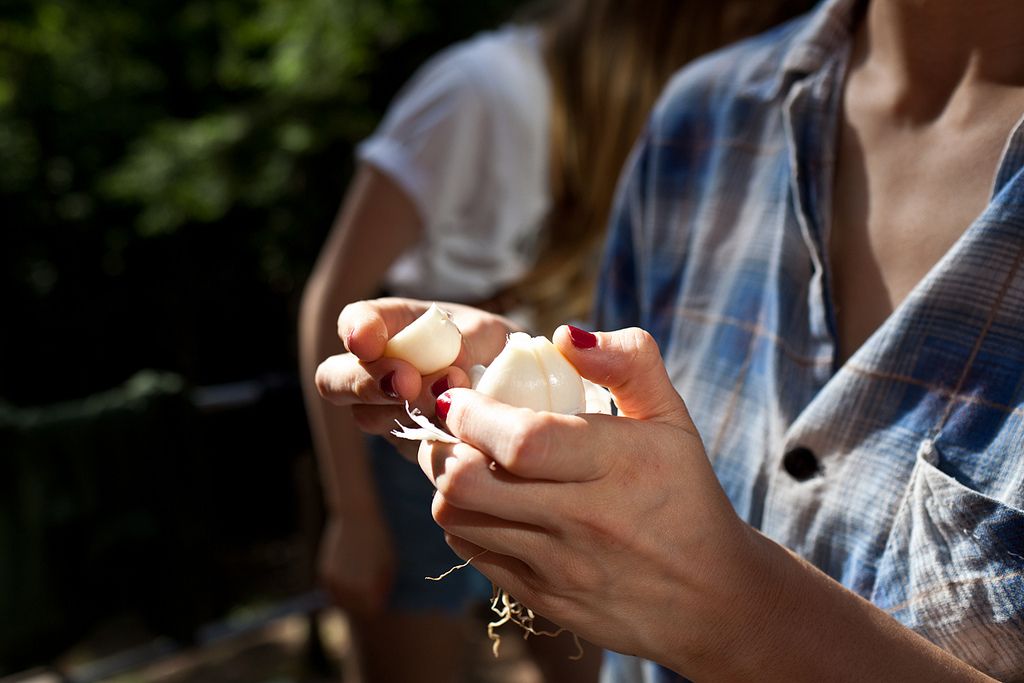 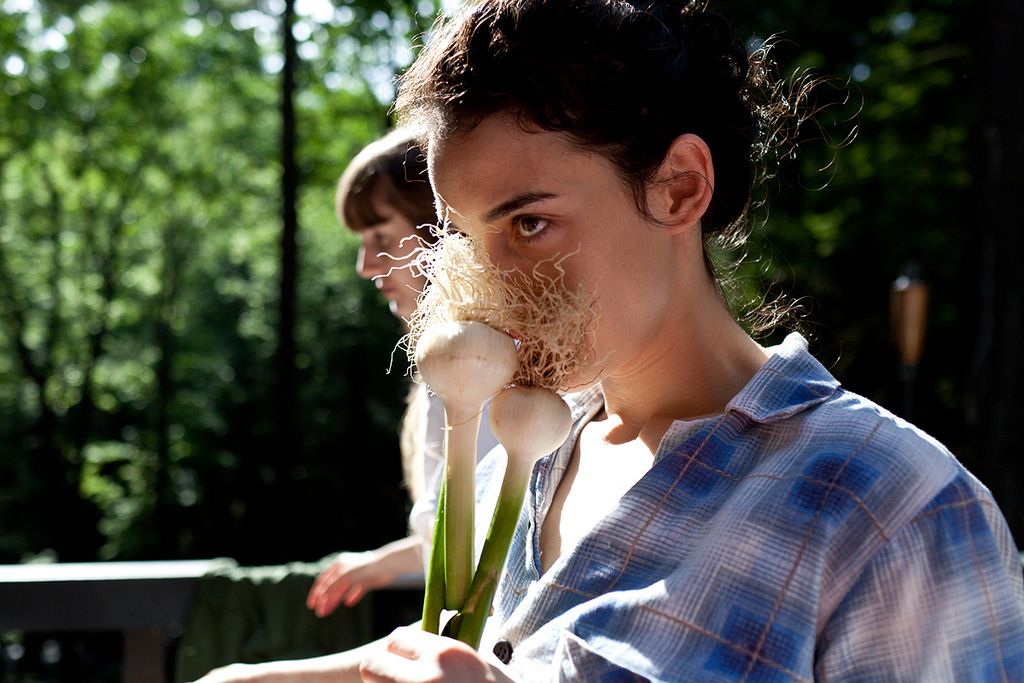 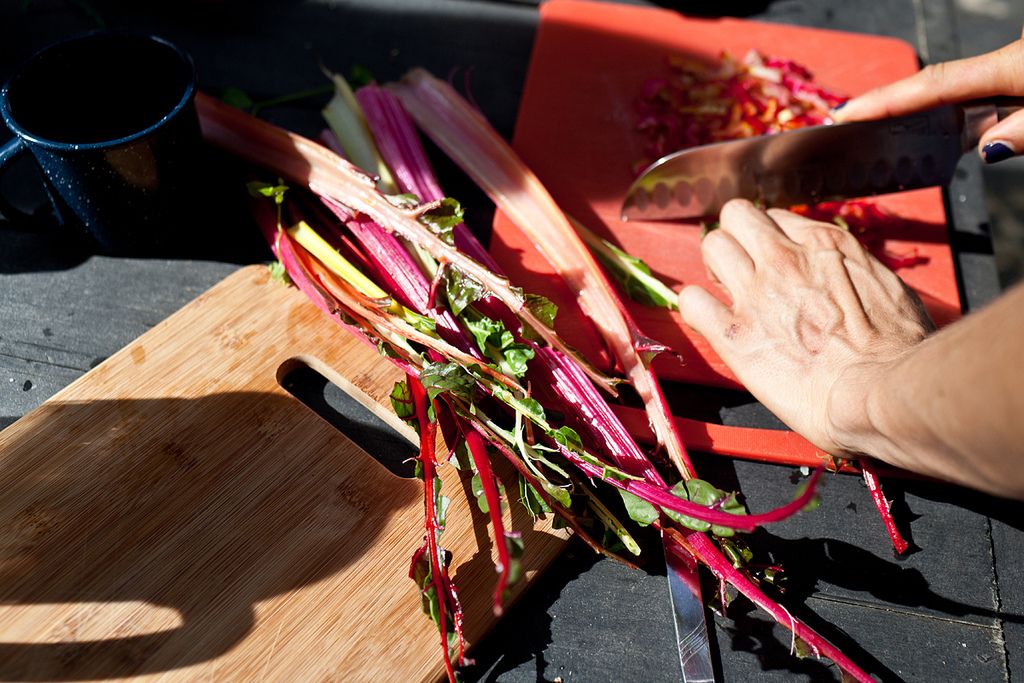 In a moment of last minute inspiration, following the discovery of a fresh bunch of tarragon, somebody suggests we make a tarragon-yogurt sauce for the chicken, using the Greek yogurt we procured at the Farmer's Market. A small test batch is composed, and preliminary tasting is met with groans of delight. We can't tell if this is the best yogurt we've ever had in our lives, or if we're all just that starving, but the distinction is irrelevant. Somebody undertakes the task of transforming the entire batch into a bowl of the tarragon-flecked sauce, and, thankfully, doesn't seem to mind when the rest of us jostle in to take dips using the stray ends of vegetables or bread hunks.

We continue to work swiftly. Vegetables are sliced, tossed in olive oil, and showered with salt and pepper, then set aside in a bowl to await the grill. Avocados are diced, dumped into a bowl, and mashed with lemon, garlic, salt, and pepper. We don't know exactly what this will be used for yet, but we know that it'll be good. Brian prepares miniature Manhattans, setting them at the center of the table in a bowl of ice so they'll stay properly cool between sips. When somebody's hands are too slicked with oil and herbs to grasp their cup, another member of the group good-naturedly tips booze into their open mouth, a delicate process that is inevitably interrupted by helpless laughter. Somebody, at some point, makes coffee. Another person brings out a crank radio, finds the signal for a local oldies station, and turns the volume up. Eventually, about an hour into everything, we all begin to get the sense that this thing we're making — this big, ol' meal — is going to be something really special. 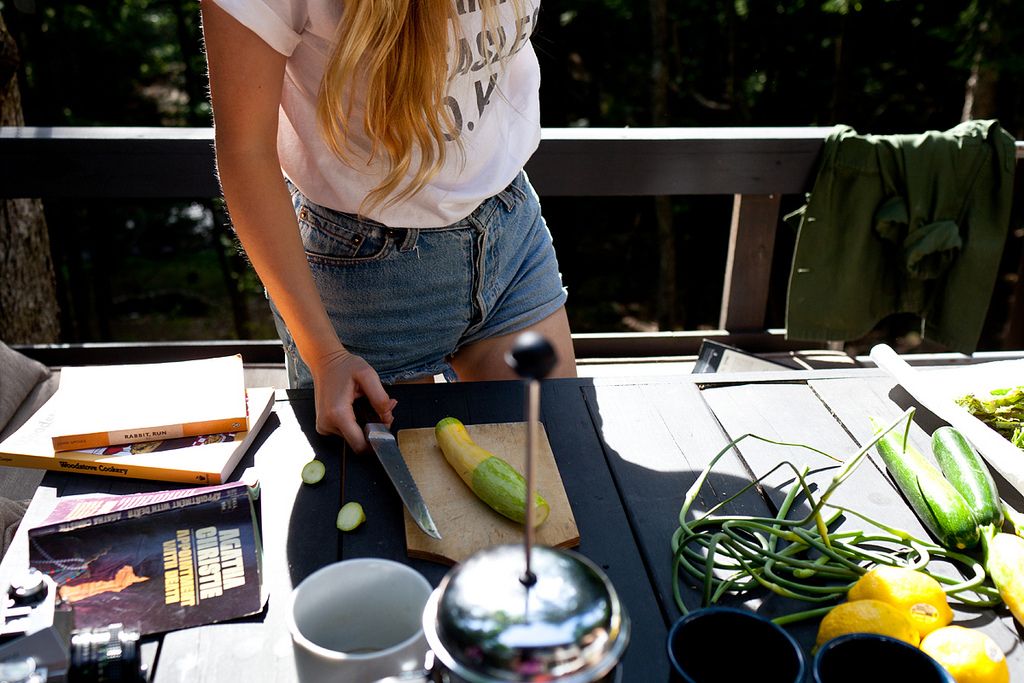 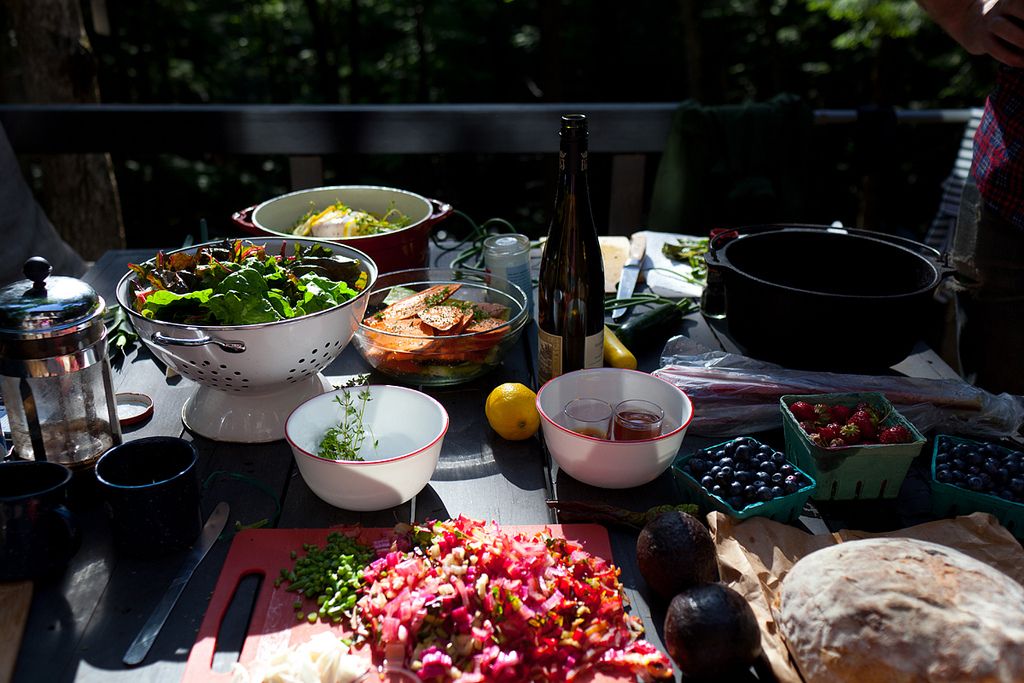 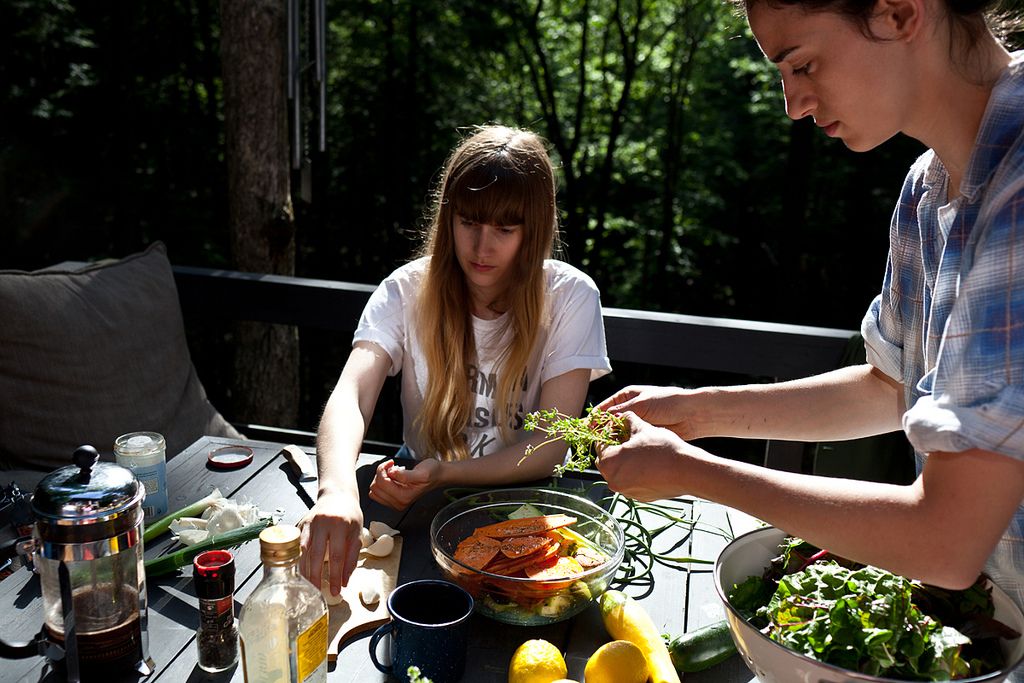 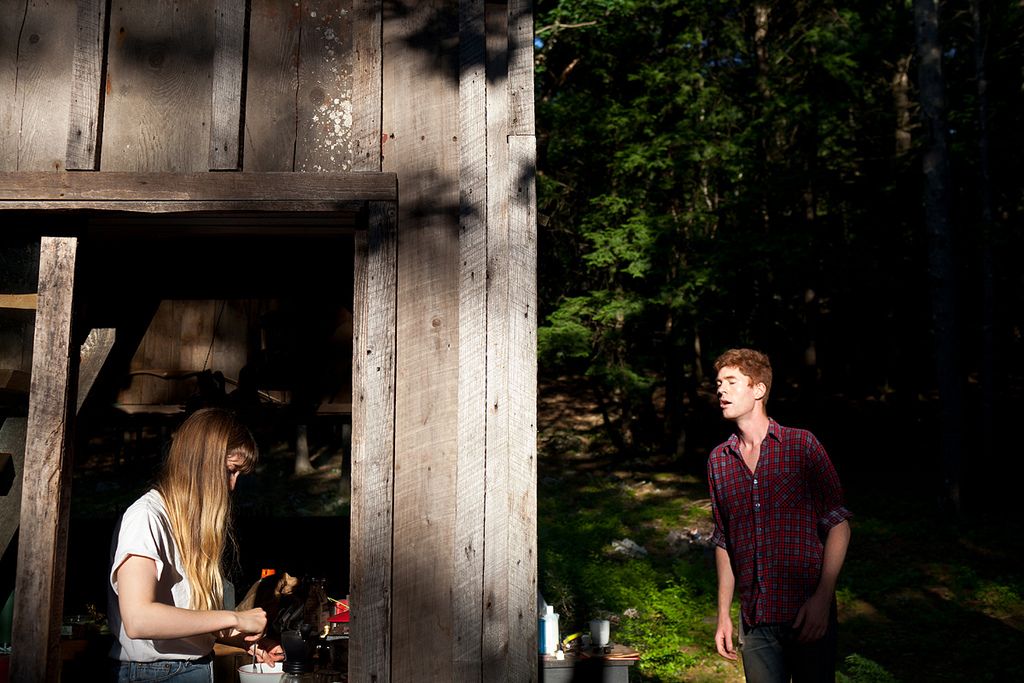 Le Creuset has generously offered to reward our Big Feasters for all their hard work, and as our fifth Big Feast, Cassie and the folks at Beaver Book will win, in the color of their choice (flame, cherry, cassis, fennel, Caribbean, dune, Dijon, or Marseille): an 11-Inch Iron Handle Skillet, a Square Skinny Grill Pan, and a 3-Quart Saucier Pan. Pitch us your Big Feast at [email protected] for a chance to win up to $500 in Le Creuset booty.

winesburgohio.tumblr.com
Cassie loves to cook, eat, and then write about it. She can't resist anything with sweet potatoes, but if she had to pick one food for the rest of her life it might be avocado. (She changes her mind a lot.) She also believes that anything will taste better on a tortilla, and that tacos are the premier food of summertime. You can catch her reading Calvin & Hobbes on the stoop of her apartment, or on the roof in her garden. Say hello!

Blissful B. August 21, 2012
Such beautiful writing, in a stunning setting, with mouthwatering food and can I just say: people "pretty enough to be on tv.." That sounds sarcastic, but it's not. Thanks for the beauty on all levels, the writing above all.

lloreen July 19, 2012
Impromptu outdoor cooking is the best! You are so blessed to have such a lovely place in nature to go to with friends. I hope you will be able to keep it going for many years. How amazing this place will be if any of the friends has kids. A kid paradise, I would say.

cassiem July 20, 2012
You are right on both counts! It's an grown-up paradise, as well. Or, at least, it's a paradise where grown-ups sometimes get to feel like kids.

aargersi July 19, 2012
I wanna come up there and shop and cook and hear the Legend Of The Lamb Stew
This is a great series!!!

Little B. July 19, 2012
Ok let the record show that I'm officially taking cred for that tarragon yogurt sauce because I HAVE NOT STOPPED THINKING ABOUT IT SINCE ;n )

Kenzi W. July 19, 2012
This just keeps getting better. I vote for a return trip (on which I will invite myself along), and a regular column.

cassiem July 20, 2012
Kenzi, the meal you made during our Secret Ingredient dinner is like... your lifetime invitation. Just saying, haha.