Today: Don't fear baking projects with children -- not even soft pretzels. Just give in. 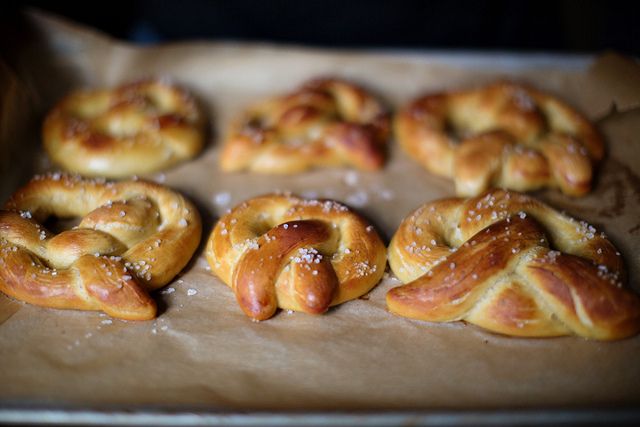 Even the word baking is disingenuous. For any self-respecting child, the baking part of a baking project is gratuitous. The part before baking is what matters: the desperate, increasingly frantic attempt to ensure that nothing is left to be baked. If there is any batter or dough that actually makes it in the oven, the child has failed. Raw dough is the street drug of children; the baked version is less pure.

Also, about that preposition: with children—with? Almost any other preposition would be more accurate: Around. Amid. Against. 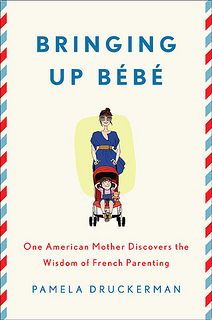 There are two ways to deal with the chaos of baking with children: the first is the French way, at least according to Bringing Up Bébé, in which French preschoolers learn patience and independence by baking on their own. They make yogurt cakes for snack! It’s a totally adorable cultural ritual, and if you also find it maddeningly competent and superior, you can always tell yourself that their yogurt cakes probably suck. Not that I’ve done this.

I have tried baking with my preschooler this way—executive function training, with more butter—and you can do it, but it helps to have an entire culture to back you up. It’s hard to make your household into France for the afternoon. Which is why I usually go with the second way: give in. 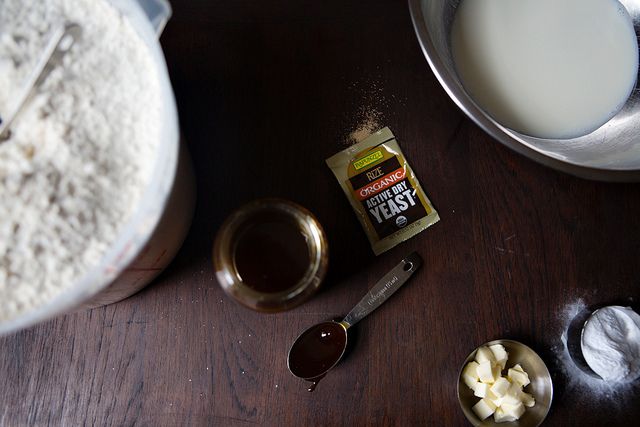 Don’t give up, exactly. Just give in: don’t expect that you’ll make what you’re making. Do not try to be efficient: don’t make the thing you’ve been really wanting to make anyway. If there is a photo of the end product, cover it up. Put a preschool-age drawing in its place.

I love baking with Isaiah, but as with a lot of things in childrearing I love it a little more prospectively than retrospectively. We’ve been baking together since he was old enough to stir and we have now reached a happy compromise: he wants to taste everything, do everything—measure, mix, knead—and then lick the inside of every bowl afterward. This means that everything is slightly worse than it would otherwise be—poorly measured, undermixed and underkneaded—and that there is less of it, but also that it survives long enough to be baked. It seems like a fair trade. 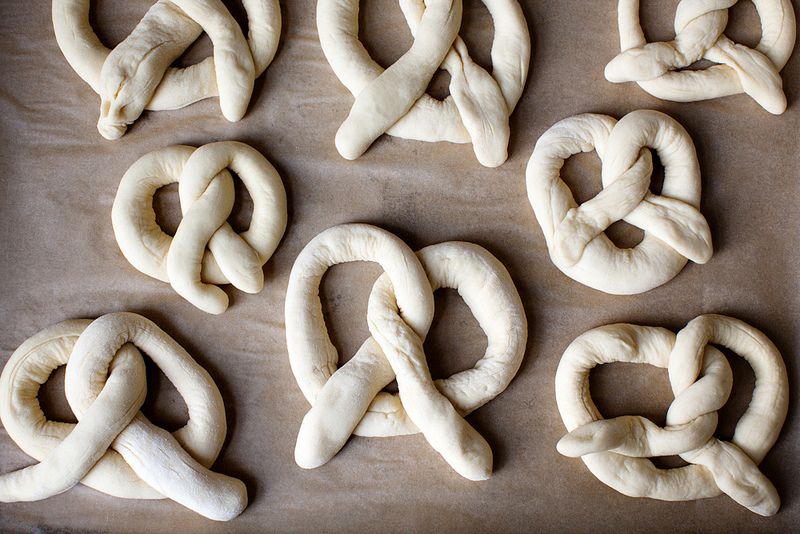 Since we have established that your helper is working against you—that you have a mole in the kitchen—pretzels may seem ludicrously ambitious. They are not. If you haven’t baked pretzels at home, you’ll be surprised at what you’ve pulled off: a perfect pretzel that’s crusty and doughy all at once, sweet and salty and a tiny bit bitter. They make you feel like you’ve gone to the fair.

They are fast: the initial rising time is 90 minutes, which means your child will still remember having made the dough when it is time to shape it. They involve a maximum of dough throwing-about: before shaping, you have to roll out lengthy coils, which make good edible necklaces or babushka-style headscarves. Remember to remove from child before baking.

And no matter what they look like, their taste is unimpaired. Ours looked afflicted with elephantitis. With a few extra mouths for help, they didn’t survive an hour outside of the oven. 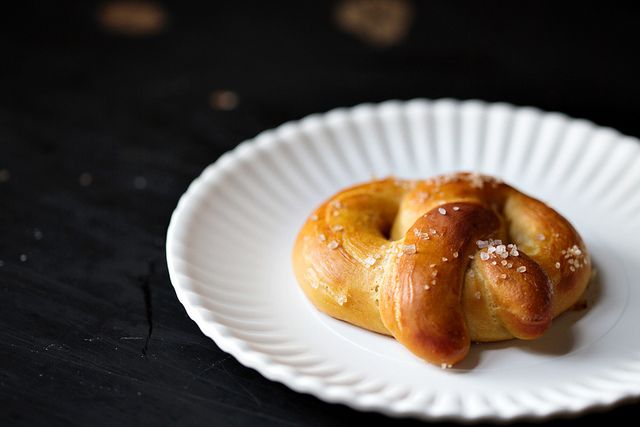 Lightly adapted from Naomi Duguid and Jeffrey Alford's Home Baking: The Artful Mix of Flour and Traditions from Around the World (Artisan, 2003)

Mister S. June 18, 2015
your introduction is so condescending and annoying. perhaps it is fun and enjoyable to bake with a child? perhaps they actually would like to see and eat the finished product. Raw dough a street drug? Asinine.

Devon P. January 23, 2015
These look delicious!! I cannot wait to try making them. I traveled to Germany and ate so many pretzels but haven't been able to find a recipe that duplicates what I had over there and this one looks like it might! I'm curious if you've heard of the Perfect Bake from Brookstone? I just ordered it because is perfect for making small batches of desserts, great for baking with my children and something they can use as well. You can choose from hundreds of recipes in the free app, or upload your own custom recipe and then it shows you exactly how much to pour depending on serving size. If anyone else is interested in ordering it it's currently on sale and you can even get discounts on your order if you visit the Brookstone coupon page (http://www.brookstone.com/brookstone-coupons) and use one of the current coupon codes! Thanks again for sharing your recipe!

Marc O. December 19, 2012
I love it. I used to be a teacher and we did pretzels (Bretzels) as a classroom activity. Here is a video that features the kids. You'll love it. http://www.marcs-culinary-compass.com/2009/01/episode-3-pretzel-baking.html

weshook August 6, 2012
I did this with my grandson (he's six) about ten days ago...without your recipe. He suddenly said, "let's make pretzels." He even went out to the kitchen to clear counterspace so we would have room to cook. I threw together a quick yeast dough, and we were in business; skipped the first rise and the second rise was only long enough to get everything shaped (the ones that he made were imperfect, but he was proud of them anyway). He wanted to make some with sugar sprinkles on top, so half the batch became sweet pretzels that were only baked and drizzled with sugar glaze and sprinkled with decorative sugar. The others, I gave a simmer and baked sprinkled with kosher salt. It was a fun afternoon and a delicious product at the end. Of course, yesterday when we wanted to bake apple pie, he decided that he would let me make it and he would just wait impatiently for it to bake and cool.

debragay August 6, 2012
I live in Israel. Where will I find barley malt syrup? What is it?
Author Comment

See the thread on that over here -- http://food52.com/hotline/16137-a-question-about-a-recipe-baker-s-sign-soft-pretzels.

Nicholas D. August 6, 2012
That link's gone fuzzy. But just click on the recipe on the bottom and then click on the question that Jilly17 asked.

Zim August 5, 2012
Something I've wondered: why scald the milk if I am using pasteurized milk?

farromeque August 5, 2012
where do you get the barley malt syrup and can you substitute

Kitchen B. August 3, 2012
Nicholas, you are my fellow Parent-in-Training. How do you capture so perfectly the angst ' prospectively vs retrospectively'...and how do you know that this weekend, I have planned a baking project with the kids in which I promise to shut up. Tie my hands. Coast and breakneck slowness and enjoy being with my offspring.

Plus I LOVE soft pretzels!

drbabs August 2, 2012
"this column concludes..." What? I don't even have little kids at home any more, and I've loved your column. Why are you stopping? (Insert frowny face here.)

Kristen M. August 2, 2012
Oh no he isn't! We're not letting Nicholas get away that easily. He just means this particular column ends with a soft pretzel recipe at the bottom -- a great one!