All week, Emily Vikre (a.k.a. fiveandspice) will be strategizing, planning, and cooking up a Scandinavian independence day celebration. A 17-course celebration, to be exact.

Today: The grand planning of The Feast of Nationalistic Proportions. Check out her previous post: The Big Idea. 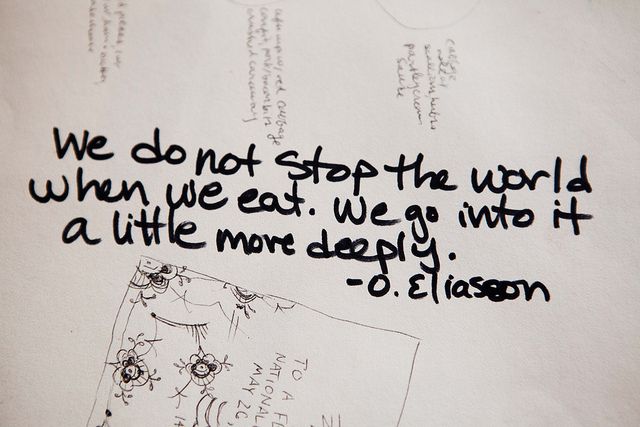 Within a couple of weeks of beginning to plan this feast, I started referring to it as "my other dissertation." I found myself devoting a lot of my spare brainpower to it. I couldn't help it! It was too much fun to think about.

When I sat down to begin building my "menu of nationalistic proportions," I first jotted down all of the dishes that feature every year in our neighborhood Syttende Mai party: meatballs, potatoes, red cabbage, cucumber salad, lefse, breads with meats and cheeses, scrambled eggs, gravlax, mushroom sauce, vafler (Norwegian waffles), boller (cardamom raisin buns), rømmegrøt (sour cream porridge), rhubarb soup, bløtkake (whipped cream and berry cake), kransekake (almond ring cake), and even a few others. You know, to make sure no one leaves hungry.

"What characterizes these foods?" I mused. Why are they the foods we've chosen to hold on to and make year after year for this national holiday? How do they relate to New Nordic Cuisine? 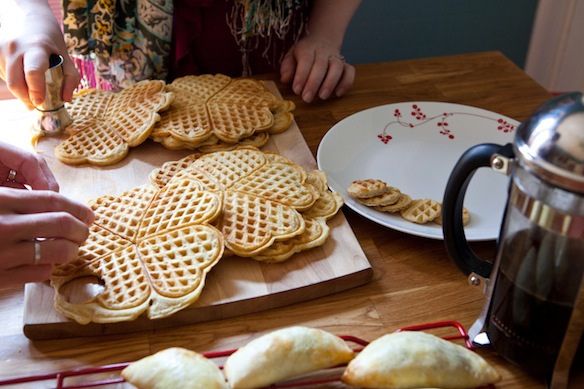 I had some of my own opinions, but I decided to be scientific about the whole process and ask a couple of experts as well. I started with my mom. She is an immigrant, a folklorist, and torchbearer of tradition, after all. Plus, she was once quoted in a book about lutefisk, which I feel makes her eminently qualified to speak to these questions.

At first glance the answers she gave me during our chat may not seem like they would be terribly informative. Why did she choose to preserve the tradition of making and serving meatballs and potatoes, for example?

"Well, meatballs, I mean, who can live without that?"

Hmm, okay. Interesting point. How about boller or vafler? 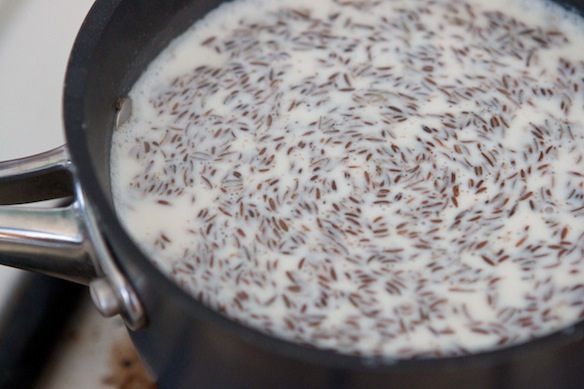 As insubstantial as this may sound as an argument, it actually presents an important point about why people choose to preserve the dishes that they do. Basically, they can't not keep making them. I still don't know why certain dishes became as popular as they did: why bløtkake is the cake served at every celebration, for example. I didn't have time to delve into that much history. But it does make sense that once something is the birthday cake or the snack one serves guests at coffee time or the quintessential comfort food, of course it becomes tied to your sense of what is right and what is good. It is one with your memories and your sense of identity, and you won't let go of it, even if you move to a new town or country. 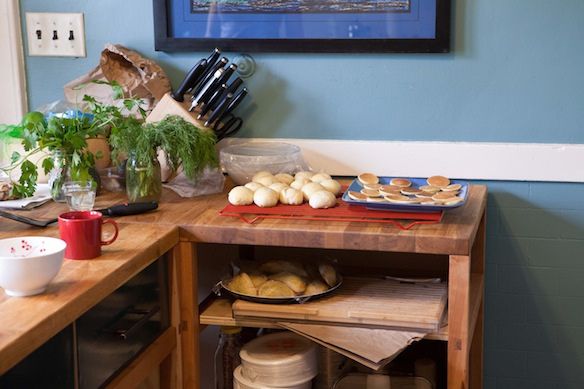 After speaking with my mother, I next emailed back and forth a bit with Beatrice Ojakangas, an acclaimed Scandinavian cookbook author who I am also lucky enough to have as a family friend. She told me that she sees the Scandinavian foods that immigrants have held on to as "down to earth." But that it's also created a sort of "time warp," and the foods that many people perceive as Scandinavian may be those that their Swedish grandma always cooked, but within Scandinavia itself these foods have evolved.

She told me that she thought the New Nordic Cuisine can be seen as a different way of preserving traditional foods. It takes traditional techniques and traditional ingredients – the raw elements of the cooking – but presents them in new ways. 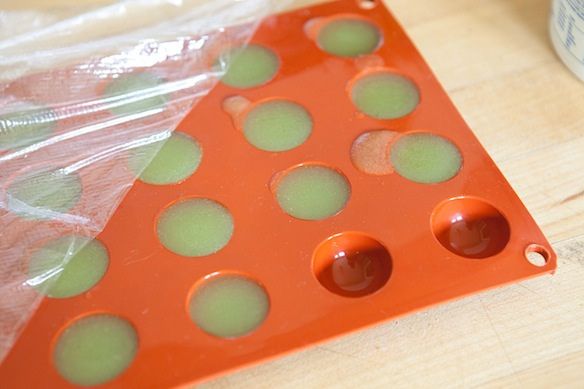 Both my mother and Bea spoke of cuisine using the metaphor of language. Sometimes languages evolve in one country while staying frozen in time in another to which people had immigrated (for example, in Iceland they still speak the language the Vikings spoke while this language has evolved in the rest of Scandinavia). And, while the way we speak may change through the generations, there are still fundamental words or stories that stay the same and allow generations to connect with one another.

The idea of taking the same words but creating new expressions guided me as I began to sketch out concepts for updates of our traditional Syttende Mai dishes. How would I make them new? Fancy? Cool? By sous vide-ing things, maybe? Or serving them deconstructed? I sketched out possibilities in this vein. I came up with goofy ideas like trying to fill meatballs with gravy that would spill out when you cut into them. 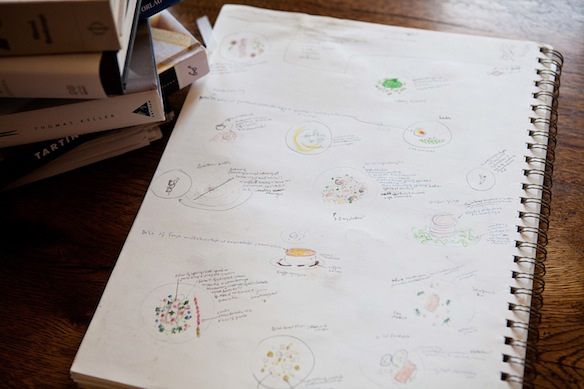 But, when I looked at my ideas they felt all wrong. They seemed silly and contrived, a not very funny parody of a fancy meal. This was a sad empty shell of the project I had been hoping to do. I felt like a fake, like a child in her mother's too large high heels playing house. But, I couldn't put my finger on what was wrong.

Then a friend lent me his copy of the Noma Cookbook. You'd think I maybe would have done this a little earlier, right? To get a strong sense of what New Nordic Cuisine was all about? Yeah, well, I'm not always that quick on the uptake. I sat down with the book, heavy in my hands, filled with the haunting, moody images of Ditte Isager. I devoured the thoughtful introduction (written by artist Olafur Elliason) followed by Rene Redzepi's diary entries from the early days of Noma while the restaurant's concept was truly being birthed. Finally I pored over the recipes, spellbound by the dishes that spoke to me in a language I felt surprisingly familiar with, whether or not I even understood what the ingredients were. 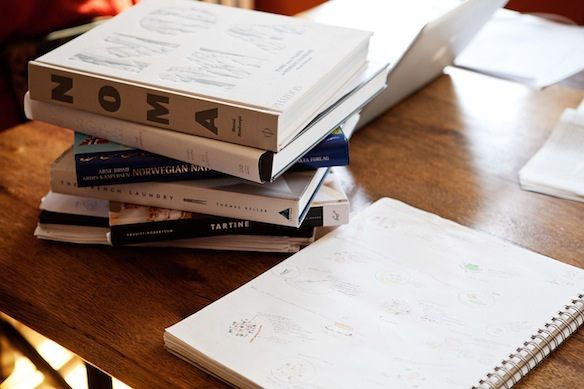 In about three hours my thinking was completely and utterly transformed. I became possessed by two words, two critical elements. Place and Time. These also happen to be part of the extended title of the book. Again, I can be a little slow to absorb these things. But I got it. And, I'm pretty sure I started to mutter them to myself like a mantra. Place and Time. 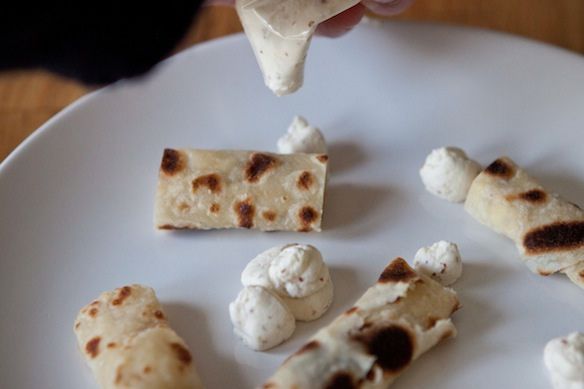 It was time for the free-associating to begin. As I conjured up memories of flavors and smells, images flooded my mind. Valleys dotted with tiny farms, their cow pastures flanked by potato patches and fields of rye; hillsides covered with mustard flowers and wandering sheep; cutting rhubarb stalks from the sprawling plant in our flower garden; birthdays punctuated by berry picking and baking cake; stopping on a hike at a mountain hut to reenergize with a waffle or sausage; making lefse in the cozy kitchens of our neighbors, the austere birch forests of northern Minnesota outside; mushroom hunting in the damp ground of dark forests. The many flavors and their respective images flowed from my mind out onto the pages of a sketchbook, and the menu and plating designs began to take form.

Here's a little stop motion video I made of plating one of the dishes I designed!

Le Creuset has generously offered to reward our Big Feasters for all their hard work, and as our sixth Big Feast, Emily will win, in the color of her choice (flame, cherry, cassis, fennel, Caribbean, dune, Dijon, or Marseille): a Heritage Cast Iron 1 Quart Fish Gratin Dish, a 3.5 Quart Braiser, and an Anodized Saute Pan with Lid. Pitch us your Big Feast at [email protected] for a chance to win up to $500 in Le Creuset booty.

fiveandspice August 30, 2012
Thanks arielle! I had great fun sketching out different versions of the different dishes. Any excuse to get out the colored pencils...

Midge August 29, 2012
Wow Emily! What an undertaking. Your musings, pics (I feel so lucky to have tried those tasty waffles!), and super cool video have whet my appetite for the big feast. Can't wait.

fiveandspice August 30, 2012
Thanks Midge! The whole process was a total blast. This particular batch of waffles also had beer in the batter! Yum.

fiveandspice August 29, 2012
Thanks MrsLarkin! (for some reason it won't let me reply to your comment, so I'm just replying up here). That's just what I was going for. I'm glad you like my sketches. Mostly my sketchbook is full of silly doodles of things like chickens, but now and then useful stuff comes out!

TXExpatInBKK August 28, 2012
Really enjoying your Big Feast description! And have to know, what is in the sphere shaped silicon molds...

fiveandspice August 29, 2012
Thanks TXE. I don't want to give too much away before you get to see all of the final dishes on Friday, but I can say it has to do with cucumber ;).

TXExpatInBKK August 29, 2012
Looking forward to it!

Kitchen B. August 28, 2012
Oh, and I have that Scandinavian waffle pan (in addition to having a typical American/Belgian one!). Looking forward to seeing how you serve yours!

Kitchen B. August 28, 2012
Something new in something old, rediscovering what we never knew, finding ourselves in the midst of our mother's histories, and bound together by culinary cords, that bind, that stretch and that encourage us to seek more. I LOVED your essay, and the revelations of Time and Place. I'm so looking forward to reading more and being inspired! Thank you!

fiveandspice August 29, 2012
Thank you SO much Kitchen butterfly. I feel like I learned so much about all those things through this whole process of exploration and reflection, and it's wonderful to get to share my thoughts. I'm really glad you enjoyed it.

mrslarkin August 28, 2012
love the video! It's like a mini Norwegian wood of meatballs and potatoes. And your sketchbook! You didn't tell us you were an artist, too.

Looking forward to the next installment!