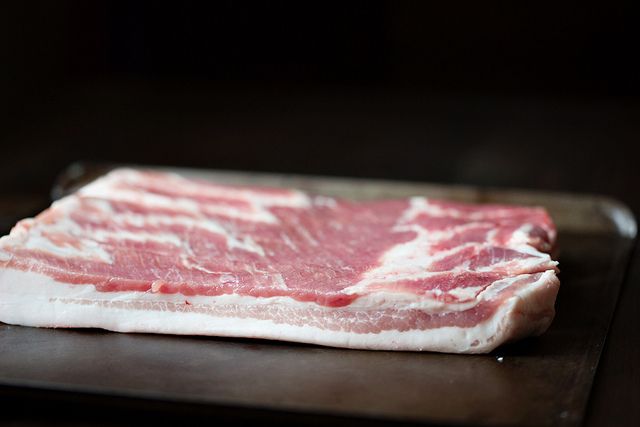 We've long admired our friend, and author of An Everlasting Meal, Tamar Adler's pursuit of "cooking with economy and grace." Tamar has a great talent for using a handful of ingredients to chart a fluid course of delicious meals, with no clear beginning and no clear end.

This reminds us of one of our Food52 friends, who has a similar knack for conjuring up countless dishes from one set of ingredients. AntoniaJames has been member of Food52 since the beginning, sharing not just her many recipes (175, to be exact -- and several of which have won recipe contests), but also her extensive knowledge of food and cooking, with the rest of the community.

When we were mapping out our Summer Food Fights, we realized that a challenge featuring these two inspired cooks was a no-brainer. We'd assign them the same ingredient (a 5-6 pound pork belly) and ask them to chronicle their separate adventures with it. Happily, they were both up to the challenge -- the Everlasting Pork Belly Challenge was on!

Without further ado, we now present to you:

Tamar Adler's journal of the Everlasting Piece of Pork Belly

A good way to get as far as you can with anything you buy is to make sure you’re buying an ingredient with fat and meat. (If there’s skin or bone better yet.) The reason for that is that it’s good if there are different uses and applications for parts of whatever ingredient you’re buying if you’re trying to cook with future meals in mind. Beans are a good example. In the case of beans, the beans themselves are the meat. The broth the beans cook in, which has some beaniness and saltiness and oil, and the flavor of whatever vegetables you put into the bean pot, is the fat.

In the case of meat, the meat is the part of the meat that looks like…meat, and the fat is what usually gets discarded -- the actual fat, and the liquid created by braising the meat. But that stuff isn’t just collateral stuff; it’s a mechanism for another meal to happen -- a cooking medium that seasons whatever cooks in it effectively and efficiently. It is also an enriching element, so that everything else can be simple.

That’s because in one piece of meat you have all parts of many meals.

There’s the sort of meal we think of first: meat at the center of the plate; and the sort we think of second: starch at a plate’s middle with a tantalizing, viscous sauce of some sort; meat for a sandwich, meat for a salad…

Here’s what I did with a five pound piece of pork belly. 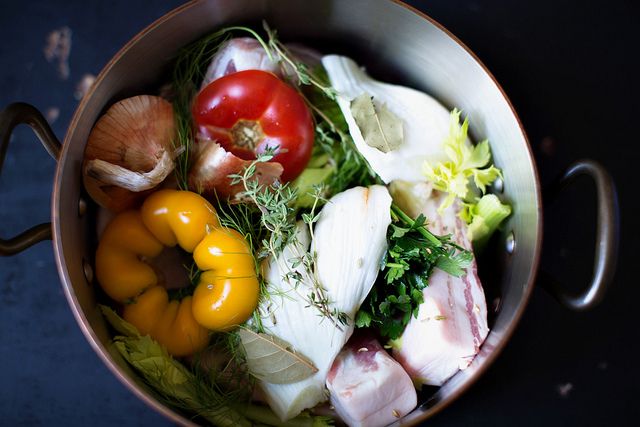 Braised pork belly, cooked on a Saturday morning in a very deep, square pan with a mirepoix of onion ends, a few pieces of celery, two carrots, the outers from two bulbs of fennel, the fennel tops, the top slices off four tomatoes, the tops of two peppers, the stems of half a bunch of parlsey, a few sprigs of thyme, two bay leaves, a small pinch of whole fennel seeds, white wine, chicken stock, and water.

I’m not counting the meals that preceded the braising itself -- the quickly pickled cucumbers and onions that created the onion tops, or the sliced tomato salad that created the tomato tops, or the sliced pepper and parsley topping for little homemade pizzas. Those all existed, and they all predicted the coming pork belly meals, nudging along the creation of scraps that had to accrue in time for the Saturday braise. But in any case, I’ll start with the cooking of the meat itself, because one has to start somewhere.

Here are the meals I’ve gotten from my braised belly, then.

Early dinner for three people: one small square of braised pork belly per person, fat side browned in a cast iron pan over low heat, with a little warmed braising liquid poured over each, with warm boiled, parsleyed potatoes and cabbage slaw

Lunch for two: sliced braised pork belly, each side browned in a cast iron pan, cooled, on thickly cut white Pullman loaf, each slice spread lightly with homemade mayonnaise, then topped with a thick slice of tomato, salted and sprinkled with tarragon or chervil (or neither), a slice of butter lettuce, freshly ground black pepper; closed up, cut in half on diagonals. Late in the lunch I realized all this missed was a little of the leftover cabbage salad from two days earlier.

The rest of the pork belly I cut into slices a half inch thick and froze. I kept the slices from sticking together by using the blueberry trick: freezing the slices (or blueberries) on a baking sheet, then layering them, already frozen, into a Ziploc bag. 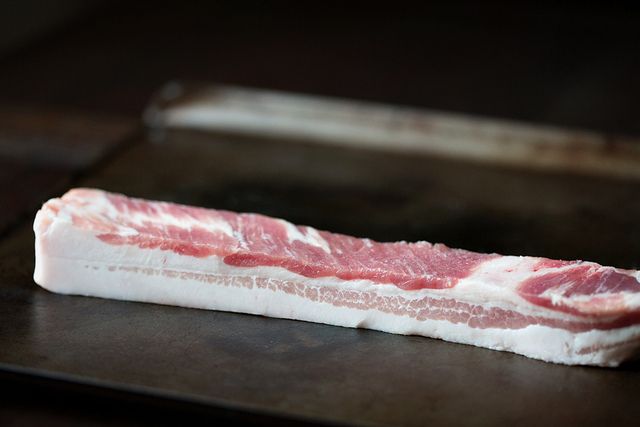 A savory onion and anchovy tart: I skimmed the braising liquid, breaking the fat up and putting it into a little, separate pot, then warming it together for a more uniform consistency, then cooled the fat in a small jar in the refrigerator. Then I followed a tart dough recipe which used lard instead of butter, slow cooked a lot of onions, then mixed them with a little heavy cream, filled the tart with them, layered the top lightly with crisscrossed anchovies, browned it quickly in a hot oven, then threw a little torn fresh basil over that, then thick slices of tomato, salted and peppered, right before serving it, at room temperature.

Vegetable hash with fried eggs and crusty bread and corn relish and a butter lettuce salad for two: The soft, mushy, salty, porky vegetables from the braise became a delicious late afternoon meal. I kept them in the refrigerator when I froze the rest of the belly. I pulled them out, roughly chopped them, then heated a cast iron pan, added a little of the leftover fat, then the smashed vegetables, along with some onions left over from the tart filling. I fried and moved it around a lot until it seemed thoroughly hashed. At the same time, I toasted a thick slice of bread a person, heavily buttered each and fried two eggs. I put the buttered toast on a plate, then hash on each plate, topped with chopped parsley and chervil, then a fried egg, which I topped with a quick relish I made from thinly sliced spring onions, raw corn, lime juice, parsley, jalapeño, and salt. This was a delicious meal, though I never made it to my buttered toast.

Lunch for one of shelling beans with corn, tomatoes, and soft boiled egg: I used a cup of the salty, porky braising liquid along with water, a little piece of the inside of celery, and a bay leaf to cook fresh lima beans. At the same time, I cooked corn I’d taken off its cob in a little water with a tiny bit of butter and a tiny pinch of salt in a shallow pan. When the beans were done, I scooped some out, combined them with some of the corn, sprinkled both with a lot of parsley in a shallow bowl, added wedges of tomato, salted, and halved a sort of between soft and medium boiled egg into the middle. Then I ate it all with a spoon.

Lima bean, zucchini, and corn soup with crusty toast and tomatoes with buttermilk-dill dressing for two: I used more of the liquid from braising, combined with water and lima bean broth, for a lima bean, corn, and zucchini soup with pistou.

Lima bean and pistou crostini for two: The next night I made toasts with more of the lima beans, smashed up, a slice of medium-cooked egg on each, and drizzled each with the end of the pistou. (This counts since the braising liquid was in the lima beans.)

Butter lettuce salad aux lardons for one: I made a mustardy-tarragon vinaigrette for butter lettuce, then turned one slice of braised pork belly into lardons and fried them, then poached an egg. Then I ate it all happily, and drank Commanderie Peyrasol, but only three sips, then drank an espresso, and everything seemed right.

Pappardelle with pork belly ragu for four: I thawed more pork belly, made a carroty-tomato-ey-oniony, fennel-frondy mirepoix and cooked the heck out of it, then added sliced pork belly, especially shredding in the meaty parts and saving the fatty bits separately. Then I added rehydrated porcini, finely sliced, and made a very dry, savory pork belly ragu, and mixed it with that really great, silky Cipriani pappardelle. 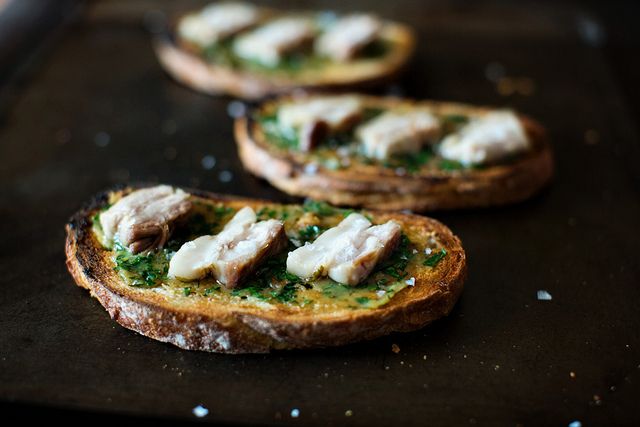 Open faced fresh bacon crostino for four: This is sort of out of my brother’s book. I made medium thick slices of toast, then poached fresh garlic in olive oil over very low heat. Then I smashed it, and smashed in a lot of finely chopped parsley, then spread that on the toasts, then topped each with a slice of thawed braised pork belly, which I’d warmed on a high sided baking pan in the oven, then I turned on the broiler and put the topped toasts under it for three seconds so that the fat and meat melted into the toasts. This was sort of amazing.

A sort of Irish or German summer dinner for three: I boiled potatoes and braised white cabbage in some of the fat from the braising liquid -- which was in the fridge all along. That stuff never seems to go bad -- then added vinegar, and sort of mixed/smashed the potatoes and cabbage together and left them at the back of the stove. Then I warmed slices of braised belly in some of the braising liquid, which I’d frozen, and a little beer, and then roughly cut them into squares, and mixed it all together, so it was a little stewy, then added a little pounded garlic and rosemary and served it with potato bread and Riesling.

More fat used for frying eggs. An egg goes on almost everything. I usually do a combination of olive oil and pork fat, though… 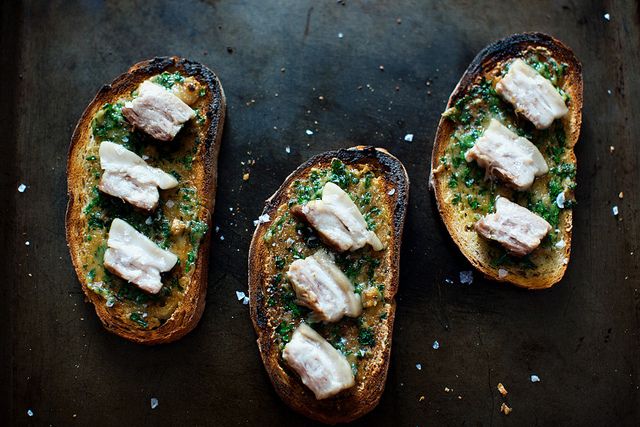 Leave your kudos and comments for Tamar in the comments section below, and check out AntoniaJames' pork belly challenge journal here!

Bevi August 10, 2012
I love the variety of your pork belly endeavors and admire your beautiful writing style. Thank you for being the inspiration for this summer fun.

AntoniaJames August 9, 2012
Oh my goodness! I've been looking forward for weeks to seeing this post. What an amazing array of great ideas you've shared. I'm eager to try so many of them. Thank you for agreeing to participate in this challenge! ;o)

drbabs August 9, 2012
Thank you for sharing this wonderful example of your work with us.

hardlikearmour August 9, 2012
That fresh bacon crostini is positively mouth-watering! I'm sharing a pig with a friend and her friend, and I know how some of my pork belly is going to be used.

Susige August 9, 2012
I would so lose in this contest....even with a year to practice. I'm utterly amazed at how many ways there are to use pork belly - not that I even really knew what pork belly was before now. You have inspired me to try something new and outside my comfort zone. Thanks!

healthierkitchen August 9, 2012
I continue to be inspired by Ms. Adler's use of what I usually think of as compost - I am going to be much more careful about what I discard in my kitchen. I've gotten much better, but I see that I still have a long way to go. What a pleasure to read!

Brette W. August 9, 2012
"Inspirational" sounds trite to describe this lovely piece of writing, but I'm sadly not as articulate! Thanks for this, Tamar.

Kristen M. August 9, 2012
We were lucky to taste that fresh bacon crostini in the photos -- it was more than sort of amazing.

fiveandspice August 9, 2012
I would think so. That's an idea I'm definitely snagging and trying out soon.

fiveandspice August 9, 2012
This is simply wonderful. Your approach to cooking and things you teach are truly inspirational. Thank you!