Anna's Big Feast: All About Azerbaijan

All week, Anna Hezel will be researching, planning, and, ultimately, celebrating her sister's wedding with an Azerbaijani brunch feast.

Today: Why Azerbaijan? Anna finds the inspiration for her feast. 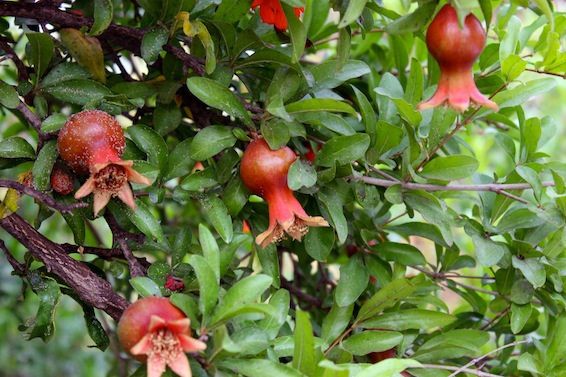 When my sister announced that she was marrying someone from Azerbaijan and that approximately one half of the wedding would take place in Azerbaijan, reactions ranged from tears of joy to absurd mispronunciations.

"Let me get this straight: you are having both an American wedding and an A…bur…za…hmm..."

Nobody in the family knew a thing about the country, aside from the fact that Rachel's future husband, Javid, had been born there. We showered Javid with questions -- What language is spoken there? What religion is practiced? Do we need special visas to visit? What form of government presides over the country? Who is your national poet? 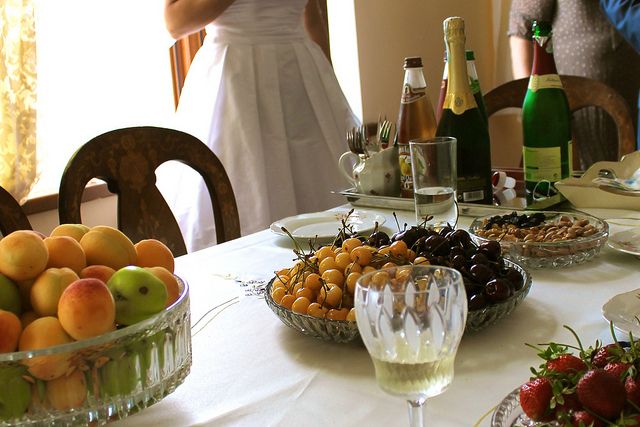 In the months to follow, as I reserved a plane ticket, applied for travel documents, and packed a dress and a camera into a small suitcase, there was only one burning question on my mind: What would the food be like? In my attempts to research Azerbaijani food, I found only the vaguest descriptions of a cuisine composed of fruits, vegetables, meats, and herbs. My sister had promised cardamom sweets. I knew that it had to be more complicated than this. 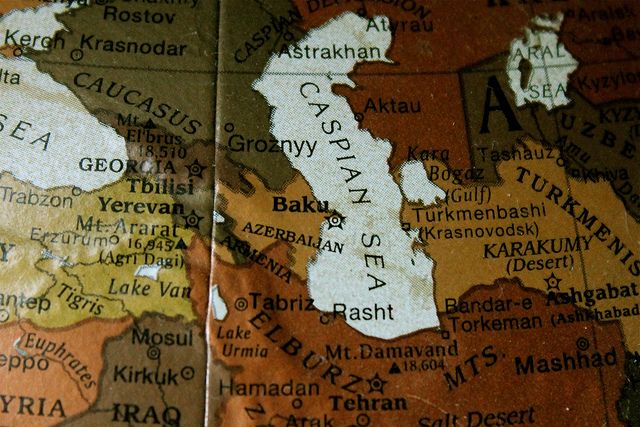 Here was a nomadic tribe settled on the Caspian Sea, riddled with war and rich with oil. Here was a desert land layered with wealth and culture, swept under the reign of the Soviet Union and then swept out again, decades later. The tiny country, wedged between Russia and Iran, had been infiltrated over the centuries with Russian, Iranian, Georgian, Armenian, and Turkish culture. The food of such a nation cannot be summed up in a paragraph. 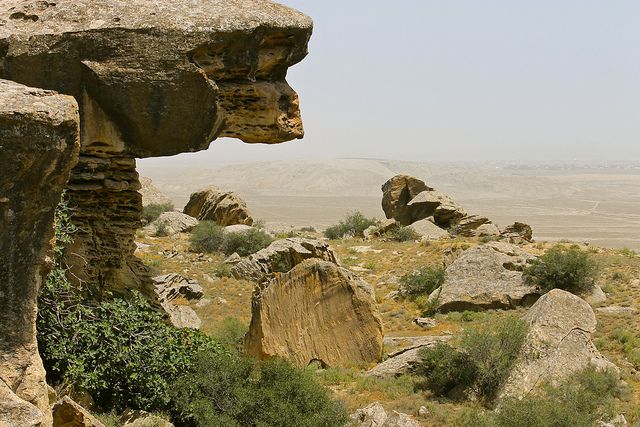 Arriving in Azerbaijan's capital, Baku, I was shocked that nobody had warned me of the pomegranate, apricot, and pistachio trees lining the old city streets. Nobody had warned me that Azerbaijani tomatoes grow as round and red and sweet as cherries, nor of the astoundingly crisp licorice spice of the tarragon here. To round a corner or to take a bite in this country was to unlock a well-kept secret. Every day, I learned of a fruit or food which exists nowhere outside of Azerbaijan and for which there are no English words. 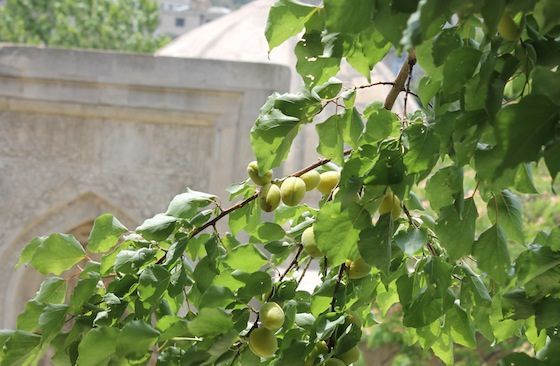 Every visit to an Azerbaijani home was met with tea, pastries, fruit, and nuts. Every dinner was a long and winding multi-course event, beginning with a chilled soup full of fragrant herbs and ending with black tea. Platter after platter of grilled tomatoes, peppers, and meats would arrive at a long table scattered with small plates of breads, cheeses, pastries, and fresh vegetables. Heaps of fresh basil, dill, cilantro, parsley, mint, and tarragon lay here and there around the table for impromptu seasoning or palate-cleansing. Watermelon rinds and whole walnuts, still in their shells, were preserved in syrup and passed around the table to be eaten with tea. 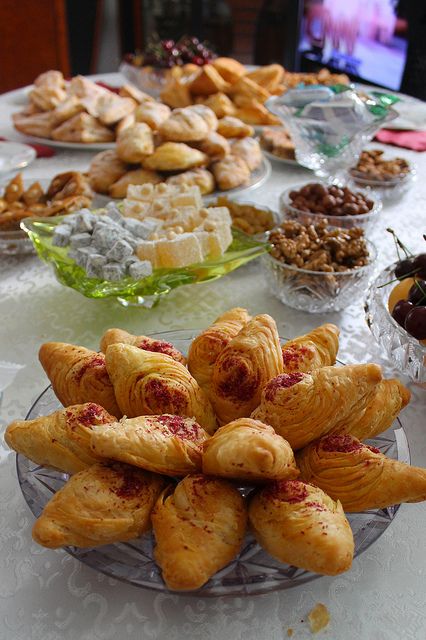 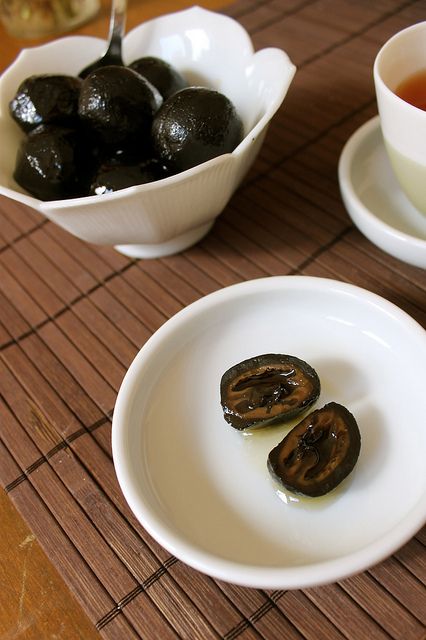 All I could think, as I tasted all of this, was that we had to find a way to share it all with the family and friends that we had left behind in the United States. It was decided. On the day after Rachel and Javid's second wedding, back in the states, we would have an enormous brunch party, full of tomatoes, eggplant, apricots, and pistachios. We would have two months to turn everything we had learned about Azerbaijani food into a big feast, fit for a newly-married couple.

Stay tuned all week long for the next installments of Anna's Big Feast! 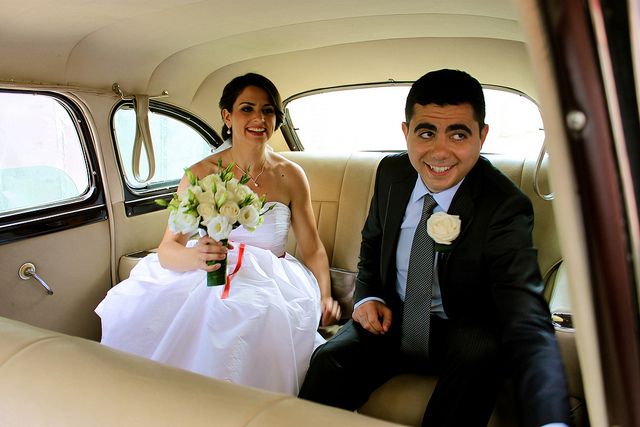 TXExpatInBKK October 17, 2012
This is fun! I lived in Baku for almost two years and am looking forward to hearing about your adventure, especially as my experience wasn't so wonderful. I can vouch that the food was great though and that I made a couple of Azeri friends for life!
Author Comment

Anna H. October 17, 2012
Then I am sure the pomegranate and apricot trees are a familiar sight to you! Yes, the food was wonderful, and I too have made some Azeri friends (and family members) for life.

cookingProf October 16, 2012
What a great post! My grandmother was from Baku, Azerbaijan. I learned to speak Azeri (not as well as I would have liked to, though) from her. I am excited to read your next post.

"Toylari Mubarak Olsin" Translation: My Happy Wedding Wishes to Them.

Anna H. October 17, 2012
Wow! That makes your Azeri far better than mine. Thank you, on behalf of the couple!

Nozlee S. October 16, 2012
I am so excited for this Big Feast! That shot of a pomegranate tree is so beautiful.
Author Comment