Inspired by conversations on the FOOD52 Hotline, we're sharing tips and tricks that make navigating all of our kitchens easier and more fun.

Today: Salt cod gets the justice it deserves. 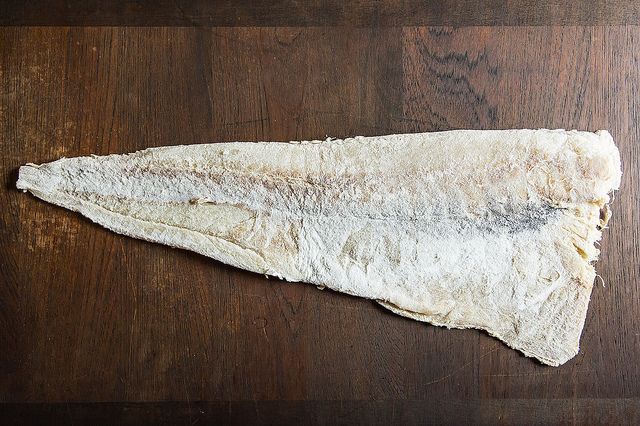 Sometimes, a name -- and a concept -- doesn’t do a food justice.

Salt cod is one of those foods.

We get it. Salt cod -- by definition, cod that has been preserved by salting and drying, resulting in a sweeter taste and chewier texture than fresh cod -- doesn’t sound appealing. It doesn’t sound reliable, or very delicious.

But there’s a reason that Pellegrino Artusi’s 1891 opus La Scienza in Cucina e L’Arte di Mangiare Bene (Science in the Kitchen and the Art of Eating Well) contains more recipes for salt cod than any other dish. There’s a reason that salt cod occupies a place in almost every European, Carribbean, and South American cuisine. And there’s a reason that a thousand years after its first production -- a time when salt cod was cheaper than other proteins, and could be preserved for months -- salt cod is still weaving its way through home kitchens and top-tiered restaurant menus, being flaked into stews and soups and pastas and fried rice, and assuring us that it is a product -- an ingredient, a concept, and a name -- that deserves to be talked about.

Salt cod can be found at a local fish store -- or even at some supermarkets. Make sure to check the label; other white fish is sometimes used instead. Cod that’s been dried without salt is called stockfish, but we recommend true salt cod; the salting imparts a unique flavor and texture. When choosing a piece, stray away from those that seem too stiff; instead, look for ones that are compact and pliant.

Salt cod can stay in your refrigerator almost indefinitely -- bringing a whole new meaning to a pantry meal. Before it can be eaten, the product must be soaked in cold water for one to three days, changing the water two to three times a day. To speed up this process, Mark Bittman has a trick: you can poach the cod in water for five minutes, then rinsing it and changing the water, and repeating the process until most of the saltiness has abated. After four to five changes of water, taste a piece; if it tastes good, it’s ready to use. 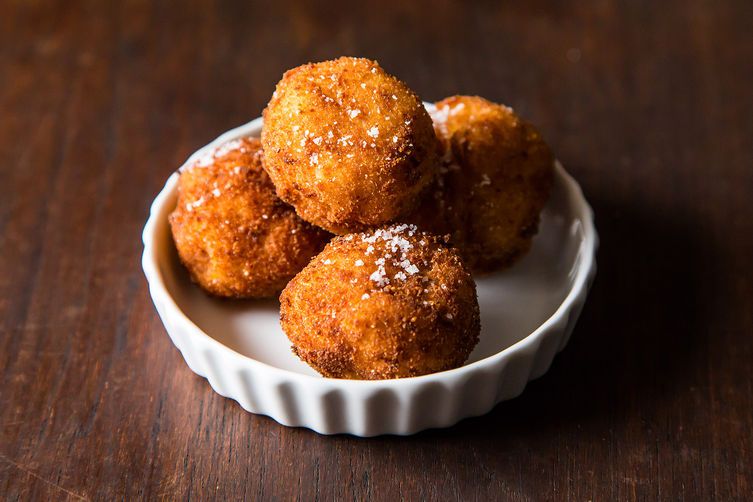 One of salt cod’s most delicious and innocuous forms, of course, is the fritter. In fact, a fried version of salt cod exists in essentially every cuisine that it is a part of. We’re fans of lastnightsdinner’s Brandade Croquettes, which use potatoes as the base for the batter -- but if you feel like mixing it up, flour-based batters, like the ones in the traditional Stamp-and-Go fritters of Jamaican cuisine, are delicious as well.

Almost everything is delicious when whipped with milk and mashed potatoes. The French, unsurprisingly, subject salt cod to this method in one of the cuisine’s most famous dishes, Brandade de Morue. The fish is cooked in milk and aromatics, flaked into a bowl, roughly mashed with potatoes, garlicky olive oil, and more milk or cream -- and whipped. You can top this with breadcrumbs and throw it in the oven, or pile it onto olive-oiled toast.

The Venetians have their own version of this dish, Baccala Mantecato, which consists of salt cod, milk, white wine, onion, and aromatics. The mixture is whipped and served with toast or polenta.

Braising salt cod in tomato sauce seems almost too easy, or too obvious. There’s a reason it’s traditional in Italian, Spanish, and Portuguese cuisines. Try cooking it in Marcella’s Tomato Sauce with Butter and Onion, or add wine and sugar and vinegar, or toss in raisins and pine nuts or red pepper flakes or any and all of the above. You can eat it whole, of course -- but it’s also delicious flaked into pasta or rice.

Because salt cod’s texture holds up so well, it’s delicious when flaked into soups and stews; it provides a mild chew and bite that makes a dish more complex. Try flaking it into your next seafood stew, or adding it to your next hearty winter soup, or even using the poaching liquid as the base for a stock.

One of the easiest ways to use salt cod is to simply poach it in water -- and to use it in a salad. We love our Test Kitchen Manager Jennifer Vogliano’s Baccala Salad, which her mother makes every Christmas Day. It’s easy and low-maintenance, quick and flavorful: a perfect example of what salt cod has to offer.

Tell us, how do you like to use salt cod in your kitchen? 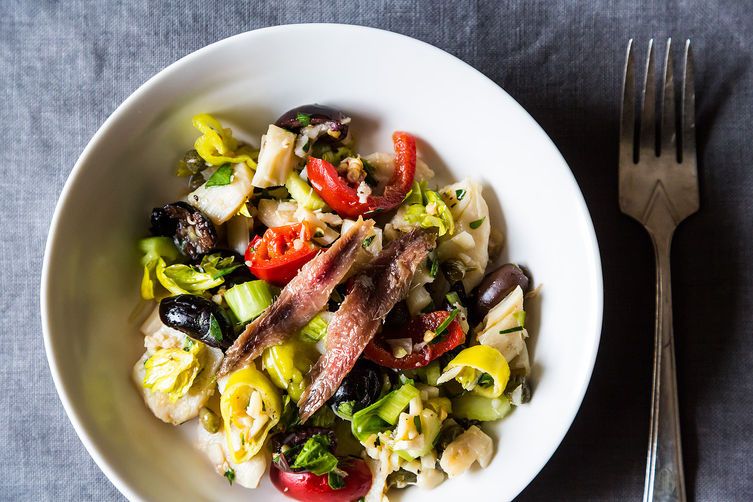 Kathy R. December 23, 2020
Salt cod — bakalar — is a food for the Croatian gods! I’m a Croatian American who learned my recipe from my mother and grandmothers. Here’s how it goes:

Soak and change water frequently for 2 to 3 days.

On the day you cook the salt cod, boil potatoes as for potato salad, peel, and cube/slice/chop as you prefer. Put in a heat-safe bowl or pot.

Have about 4 to 8 cloves of fresh minced garlic ready.

Have at least one cup or more of olive oil ready in a metal pot. You will be heating it later.

Have some parsley chopped and ready. Parsley is optional. I don’t like it, but my mom and grandmothers used it.

Give a final rinse to the salt cod, then poach gently in some fresh water for about 20 minutes or till it flakes easily.

Heat your oil to the smoking point. Then pour over the cod/potato mixture. It will sizzle deliciously.

beejay45 January 26, 2014
I make appetizers using Brandade de Morue on artichoke bottoms, sprinkle with some grated Parmesan, run under the broiler, and serve with a dry white wine, maybe some almonds and olives for a little flavor and texture contrast. Heaven.

I also make a baccala and sausage soup, which is just a broth, some white wine, garlic, a bay leaf, flaked rehydrated baccala (this is a quick cook dish, so the fish wouldn't have time to soften) and some spicy sausage. I throw in a few greens -- spinach, kale, mustard greens -- and a Tablespoon or so of curry powder. It's always popular with my family and friends.

Equator180 January 27, 2013
Rebel, you are way, way, way out of line. The Canadian Cod resource is expertly managed by means of total allowable catch, restricted spawning area and seasonal fishing effort, minimum size etc. It is one of the best managed fisheries in the world. It is also one of the worlds (Atlantic side) best areas for Salt Cod renowned the world over for its consistent quality which is due mainly as the source is from small day boats where the cod is caught by hook, processed quickly by hand and in small quantities and is sold at reasonable prices and is really a true salt cod to be appreciated, you were mislead, check the facts.

Chrissyo29 January 27, 2013
There is no mention of the wonderful Irish dish......Fin and Haddie!
adore this dish and i have a recipe from my mother that I have made often for my family

lisa H. January 27, 2013
You omitted one possibility with salt cod, right after the section called Find It could have been a section called Or Make it Yourself. I have been making my own salt cod since soon after I discovered how much I loved making things with salt cod. I look for plump 'true cod' (Atlantic or Pacific) or Ling Cod- but not one of the many varieties of Rock Cod as they are too thin. Then I simply pack them in Kosher salt. When I had a restaurant and was making large amounts, I used hotel pans with drainage. At home I simply make certain to have a base of about 2 inches of salt before I start putting the fish in. Packed in plenty of salt and refrigerated, the salt cod is ready to use in about 2-3 weeks- but I am convinced it would last years. Brandade du Morue with an egg and a couple of roasted peppers or anchovies baked on top for supper... mmm

Seaside G. January 27, 2013
I lived in Toscana for many years. Stockfish was a staple when I was very young and poor and bacala a staple later. I've lived in Florida for 40 years and still enjoy preparing bacala a couple of times a month. And always on Christmas Eve.

Carol A. January 23, 2013
I was so pleased JV Shared my traditional baccala recipe,which was passed on to me
by my husband's mother.Yours looks wonderful & very appetizing.I hope food52
followers will enjoy the recipe & make it part of their holiday tradition.
Carol Siano

Kitchen B. January 23, 2013
Interestingly, we call both salt cod and stock fish...stock fish

Kitchen B. January 23, 2013
In Nigeria, we use lots of salt cod (we call it stock fish), especially in what we call soups, which are actually stews! It is common to see it in dishes which also contain chicken or beef, so a kind of surf and turf. An American adaptation would be cooked/stewed greens (eg kale) with salt cod, or West African gravy (http://food52.com/recipes/7517_smoked_turkey_stewed_in_west_african_gravy).

Rebel2 January 23, 2013
Please purchase only non-trawled Pacific cod. According to Monterey Seafood Watch, all other cod from the Atlantic and Canadian cod are severely overfished.

luvcookbooks January 23, 2013
oh my!! I always look at salt cod in the grocery store because I love it in restaurants or when friends make it for me, but it looks so forbidding and I've never seen an article for the salt fish naive. Saving this to Pinterest, thanks!

pierino January 22, 2013
I adore salt cod and I buy it whenever I find it. Bring on the brandade and baccalao!

Nancy S. January 22, 2013
I like to salt my own cod (via the Zuni Café method). Dead easy. Also, since the fish is still half fresh/half dried it keeps a beautiful texture. I serve some sashimi-style cuts of the fish about 2 days into the cure and then after a week of salting, and a day of refreshing, make the Zuni Brandade. There is nothing like it. Nothing. Also I use a Japanese suribachi (grinding bowl) with a large sansho tree pestle to pound the brandade. I love the way the cream and olive oil smirch into the cod with satisfying glurps of the surikogi (pestle). My Christmas ritual.