Today: Burdock might not be the most attractive vegetable (it looks more like a stick than dinner), but it's a versatile root that's worth working into your cooking repertoire. 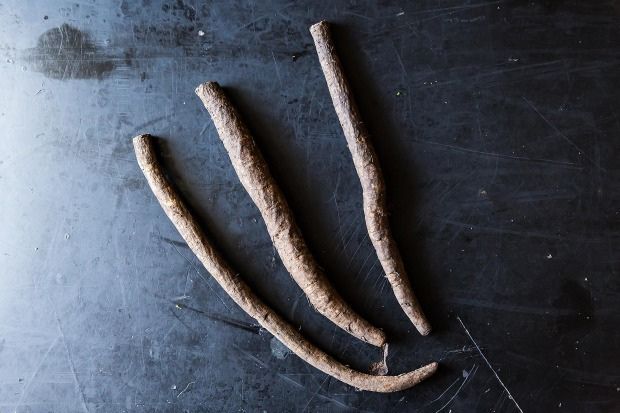 Burdock is a biennial plant in the sunflower family, which means the plant has a two year life cycle. The first year burdock is a small flower-less plant, but the second year it shoots up to between three and six feet tall. During this second year, the plant produces flowers which turn into tenacious brown burs, the tiny hooks of which actually inspired the invention of Velcro!

The roots you find won't be so tall -- they'll be about one foot in length, perhaps up to two. But the taproot can grow even longer than that -- three to four feet! That takes serious work to dig out, so it's probably no surprise to learn that burdock is another vegetable that is considered an invasive weed in some areas.

Where to Find Burdock and What to Look For
You should be able to find burdock in Asian markets (it might be labeled as gobo) practically year-round, or at farmers markets later in the summer and into autumn. If you’re into foraging wild burdock, there's an added bonus: the flower stalks can be harvested before any flowers appear, and then prepped and used like cardoons. Look for firm, slender specimens -- Diane Morgan suggests sticking to roots less than 1 inch in diameter (1), and avoid any that are cracked or overly flexible.

More: Not sure where the nearest farmers market is? Find one on Real Time Farms. 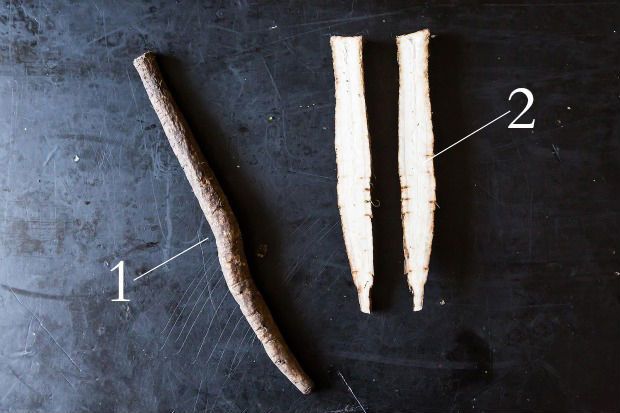 How to Store and Prep
Burdock will store well in the refrigerator for a couple days wrapped in wet paper towels and then plastic. If you know you aren’t going to get to your burdock that quickly, lay your roots in a shallow dish of water and refrigerate, or make sure to keep re-wetting the paper towels.

Much of burdock’s flavor is in its exterior, so there’s no need to peel -- just give them a vigorous scrub. If you do remove the peel, the flesh (2) will rapidly turn brown when exposed to air, so peel small sections of the root as you cut it. Have a bowl of acidulated water on hand to drop cut pieces (3) in -- this brief soak has the added benefit of removing any potential bitter aftertaste. 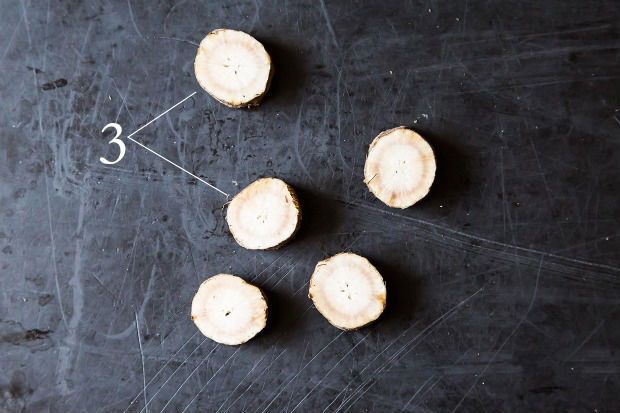 How to Use
Burdock’s sweet earthy flavor (not unlike its family members Jerusalem artichokes and artichokes) is at home in soups and stir-fries. It's a common ingredient in a number of Japanese dishes, too; you might have pickled burdock in sushi, where it is often dyed orange to resemble a carrot. Burdock roots also make an appearance in beverages, like this British soft drink! Make your own adult version, or use burdock roots to create your own root beer. Of course burdock is at home on your plate, too. Here are some ideas for working it into meals all week long:

IlovePhilly June 28, 2013
Burdock ferments super well, and it tastes amazing that way! I'll even add a bit to my other ferments, because I do think it helps!

susan G. June 13, 2013
Are you saying that the burdock growing in my yard is the right burdock for cooking?
Author Comment

Lindsay-Jean H. June 14, 2013
Yup! (If you are absolutely positive that it's burdock.) If the plant is in its first year go for the root, if it's in its second year go for the flower stalk.

HalfPint June 13, 2013
My mother makes a tea out of burdock. It's supposedly a very good blood purifier and has been used for centuries in Chinese herbal medicine for a variety of ailments because it is also antibacterial and antifungal.

foodluvdc June 13, 2013
Yes! I buy burdock root tea at the health food store. I drink it because I have anemia and read about its usefulness for treating it and its high levels of iron which I lack. Never thought about cooking with it.