Jerusalem Artichokes: Nothing About This Name is Right

Today we’re discussing the confusingly named Jerusalem artichoke. Get ideas for working them into meals all week long, and learn how to avoid their, um, potential side-effects. 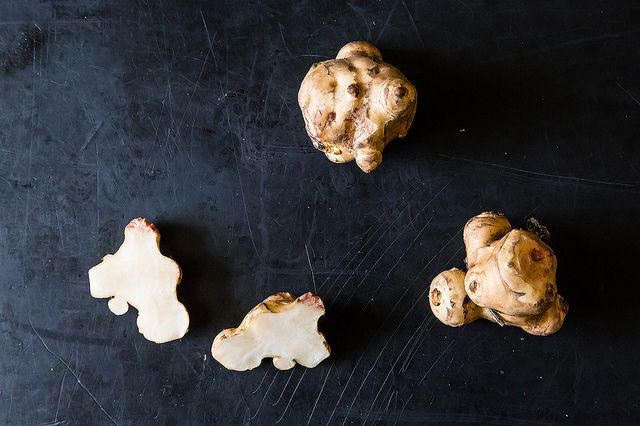 Jerusalem artichokes aren’t from Jerusalem, and they aren’t artichokes. Technically, they’re a species of sunflower grown for their underground tuber, which is used as a root vegetable. Why the misnomer? The plant was called girasol or girasole (the Spanish and Italian words for sunflower), due to its resemblance to the flower, and then artichoke was added onto the end due to the similar taste. It’s a bit of a stretch, but Jerusalem artichoke seems to have been an English corruption of the Italian girasole articiocco.

Another common name for Jerusalem artichokes was created by Frieda Caplan, a specialty produce distributor and marketer. She decided that the Jerusalem artichoke needed a catchier name, so she coined the name sunchoke in the 1960s. And that was that.

More: Now that you’re thinking about artichokes, learn about the many ways to prep them. 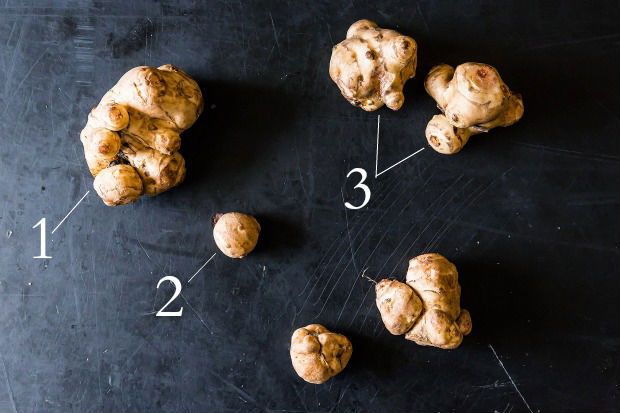 What to Look For
Jerusalem artichokes are in season from fall through early spring, so look for them at the market before April comes to a close. They should be firm to the touch, and are generally tan (2), golden, or cream colored. You might come across varieties that have a red or purple hue, but avoid any specimens that are blotchy, tinged in green, or sprouting. Choose tubers that are smooth with few protrusions (1), as they will make them harder to clean. Depending on how you’ll be preparing them, you can make your life easier by selecting similarly sized specimens (3) so they'll finish cooking at the same time.

How to Store and Prep
Jerusalem artichokes will keep well in your refrigerator for up to two weeks. Store them wrapped in a paper towel, and then placed in a plastic bag or reusable container. Wait to wash until you’re using them, and then give them a thorough scrub down -- they like to hide dirt.

Like potatoes, Jerusalem artichokes have a thin edible skin, but if you don't want to leave the skin on, (if you're making a soup or purée that you want to have an even texture, say) you can peel them before or after cooking. If you’re eating them raw, sprinkle the cut surfaces (4) with lemon juice, or place cut slices in an acidulated water bath to prevent discoloration. 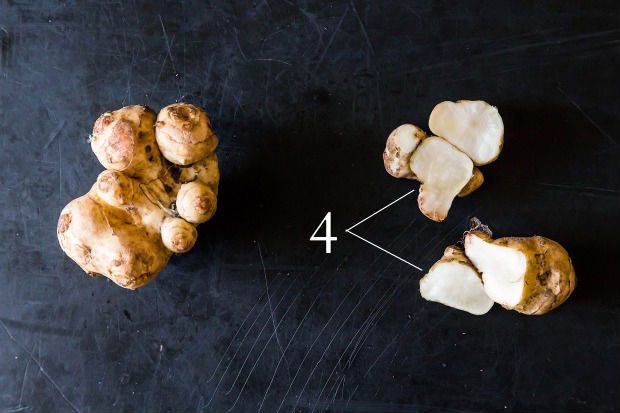 Consider This Fair Warning
We’d be remiss if we didn’t mention the potential effects of Jerusalem artichokes post-digestion. These roots are known to cause gas, similar to beans. (There, we said it.) In 1621, English botanist John Goodyer wrote, “which way soever they be dressed and eaten, they stir and cause a filthy loathsome stinking wind within the body, thereby causing the belly to be pained and tormented, and are a meat more fit for swine than men.”

So that's an extreme case, but you can take steps to avoid those effects. If you’re growing your own, harvest the tubers right after a frost. In The Curious Cook, Harold McGee devotes a lengthy chapter to “Taking the Wind Out of Sunroot.” His suggestions require commitment, though, such as cooking them for a very long period of time -- like 24 hours long. If you don’t want to cook for an entire day, consider starting with a small portion to determine how they’ll affect you.

How to Use
Jerusalem artichokes can be pickled, used raw (try thinly slicing them and adding them to a salad), or cooked (try them in soup or a purée). One of our favorite ways to cook them is to boil them in salted water till they're tender, and then roast them until they're crisp and browned. Check out the Hotline for cooking ideas too; we’ve had numerous chats about them. Get ideas for a week's worth of dishes below, and let us know your favorite way to use this root!

they certainly do not cause gassiness in everyone. For the last 20 years my family has eaten them almost daily, raw and sliced or julienned, in our green salads, and we have not had resulting gassiness. I can't say whether this is the result of eating them regularly, but i also do not remember having issues with gassiness when we first began to eat them. The funny thing is, i never knew about a connection between jer artichokes and gassiness until I read it here in this feature!

What I love about Jerusalem Artichokes (JA):

1) Their flavor- it's like a nutty carrot, with the crunchiness of water chestnuts (but none of that comparatively insipid flavor.)

2) They are so easy to prepare. Like carrots, cucumbers and potatoes, JA don't need to be peeled, and, as with most vegetables, the nutritive values are concentrated in the skin, so don't peel them! The ones we find in the market usually only need a light rinse, but if they are dirty, cut off the knobs rather than try to get out the hidden dirt, rinse the knobs, and use them with the rest of the JA tubers. While we love them in any form, we mostly eat them raw in salads, and we never bother to put them in acidulated water. They also have a refrigerated shelf life of (trust me!) months and months, stored loose in the vegetable drawer.

3) They are native to my very own country! And not only that, but to my very own region, New England, and north into Quebec! (and native nowhere else on Earth.)

4) They are exceedingly easy to grow and will readily colonize a part of your garden if allowed.
and lastly,

5) Their history: discovered(after the Native Indians) by the English settlers in MA, samples were sent back to the English royal court, where they became the fashionable rage. It is not proven, but they may have received their Latin name because of their flower; "girasole" is Latin and Italian for "turning towards the sun."

But the history behind their French name, Topinambours, is one of the most fascinating stories in the history of food. In the Age of Discovery, when explorers discovered new lands, it was common for new finds to be brought back to the explorers' homeland and presented to the sponsoring monarchs in their royal court. Pocahontas was introduced by John Smith to the royal English court, perhaps concurrently with the newly discovered JA. A few years later, a tribe of Brazilian natives was introduced to the French royal court. Coincidentally, the JA had made its way over from England and was also being presented to the French royalty at the same time.
When the French heard that "indios" had brought JA to England, they mistakenly named the tubers for the visiting Brazilian tribe, thus they became "topinambours"!!

Lindsay-Jean H. April 21, 2013
Oh QueenSashy I'm so sorry -- I hope that dinner party was long enough ago that you and your friends can laugh about it!

QueenSashy April 21, 2013
It was quite some time ago and now a fond memory :) It was a wonderful dish though, sunchokes roasted with olive oil, lavender and rosemary salt. I still swoon when I think of it. Maybe it's time to try them again in smaller quantities.

Lindsay-Jean H. April 26, 2013
That definitely sounds like a swoon-worthy dish!

scott.finkelstein.5 April 19, 2013
An alternate explanation for the name: the Jerusalem artichoke is a type of edible thistle, just like the artichoke. Note this piece of writing from Amelia Simmons: "Artichokes-The Jarusalem is best, are cultivated like potatoes, (tho' their stocks grow 7 feet high) and may be preserved like the turnip raddish, or pickled -- they like,
Horse Raddish...

LeBec F. April 21, 2013
scott, i don't know where you got that thistle info, but i have grown jerus chokes for many yrs and thistles are nowhere to be found in their presence. maybe you are thinking of a cardoon. The jerus artichoke plant is a very tall thick strong stem topped by 2" diameter sunflower-like flowers(taxi yellow petals, brown centers; no big seeds like sunflowers. Tubers, as in potato,dahlia or daylily, grow out from the stem base, underground. Unharvested tubers will continue to multiply and readily colonize an area.They are native to New England and north into Quebec.