Today: Garlic scapes want to be made into pesto. Let them. 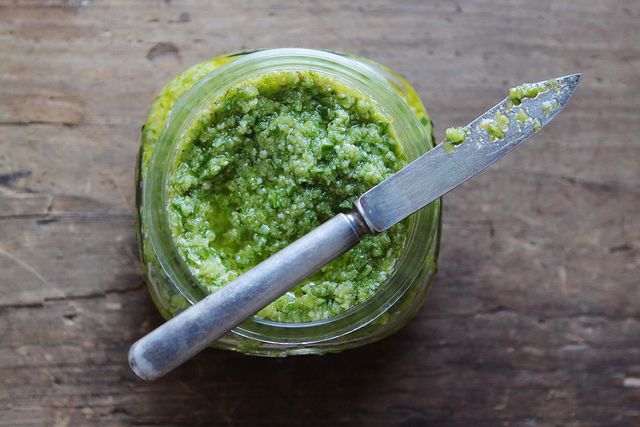 Before I learned how to drive, I learned how to describe garlic scapes. Anytime I was asked by a table in the restaurant where I worked, I answered, diligent and practiced: scapes are the tendril-like stalks that grow out of garlic. Then I'd say the soup that they were in was fantastic, and that if I had to choose, I'd drink the Viognier alongside. I was sixteen.

I didn't learn to cook with scapes until much later, and it wasn't until I did that I fully understood their charm. They're whimsical, their flavor perky but reined-in, like an eccentric but polite new friend. They became what I added to a dish when I wanted garlic but didn't want to commit to its assertive bite.

I've never put them in a soup of my own -- something about closing a chapter -- but pesto is beginning to make a regular appearance at dinner. Toss it with pasta, spread it on toast; thin it with more olive oil and it'll become a happy alternative to whatever you've been dressing your salads with.

Garlic scapes know not to overstay their welcome; they're harvested early so that their fellow bulbs can flourish. This means you'll have to find them soon, and cook them now. Get the full recipe (and save it and print it) here.

ChefJune June 12, 2013
This is a truly inspired idea. Looking forward to buying some scapes this weekend! And in return, I'll suggest to you to make this soup http://food52.com/recipes/3268-cream-of-garlic-soup using the scapes. Turns the soup from winter to summer!
Author Comment

Kitty L. June 12, 2013
What might be a nice addition to this recipe is, radish leafs. You know when you bought radishes, you always through away the nice green leafs? Don't. Throw them in the blender, with the rest of the ingredients, to make a spicy pesto. And if you want to make it a lighter in calories: replace the oil with ricotta cheese.....

Marian B. June 12, 2013
This is actually amazing stirred into ricotta!

Brette W. June 12, 2013
This was soooo good as a salad dressing. Can't make to make it at home and use it on everything!
Author Comment