Today: A kid breakfast that's more wholesome than pancakes, and won't send parents down a sugary spiral, either. 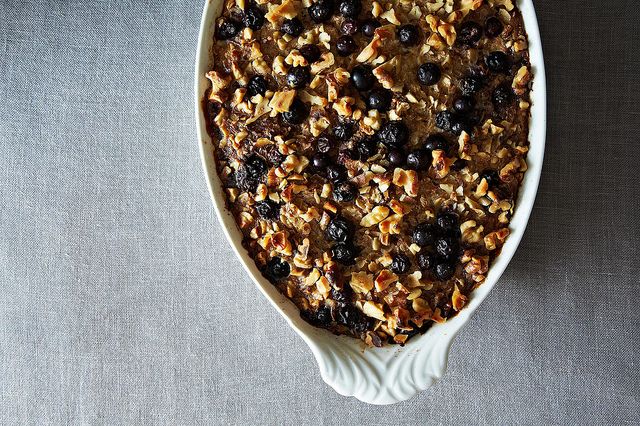 His most devious move, of course, was to requisition the grill as a uniquely male site, and to endow it with an aura that made grilling seem as if it required some sort of mystical sense of the ancient ways of fire rather than the possession of opposable thumbs. And then — and this is the truly clever part — he displayed his mastery of fire only occasionally, so that when he did it was by default a special occasion and everyone felt very grateful and thanked him profusely and trotted out their high-grade adjectives.

But the American father was not satisfied. He realized that weekend breakfast offered a very similar low-risk, high-reward return: using those same opposable thumbs, he would mix together a small number of ingredients, according to an eternal, invariable recipe, and conjure up waffles or pancakes or French toast. The near-miraculous weekend-only appearance of these dishes made everyone in the household behave in a highly atypical manner. No one said, Not waffles again. No one said, That syrup looks disgusting. No one said, Only one bite. And everyone felt very grateful and thanked him profusely and trotted out their high-grade adjectives.

All of which is to say: I stand here before you, humbly, on the shoulders of giants. 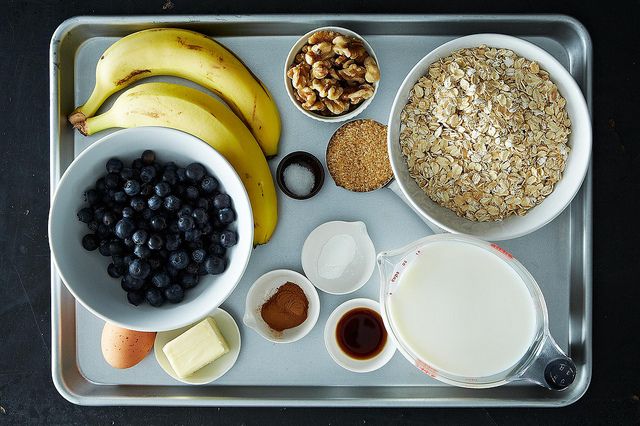 But the regular weekend-only appearance of pancakes or waffles or French toast brings with it its own problems. Not for the children. For the parents.

Children can eat an endless quantity of pancakes or waffles and it only makes them stronger. I quote from the closing lines of the great Anytime Mapleson and the Hungry Bears: “And Anytime ate 1,297 pancakes. Then he drank a big glass of milk and ate 537 more. After that, he forgot to count.”

But parenthood brings with it rapid senescence and some devastating physiological changes: 1) The discovery that spinning around repeatedly no longer has the addictive, mildly hallucinogenic effect it had in childhood but instead feels pretty much like death; and 2) that you can no longer eat 1,297 pancakes before falling asleep. Or even three pancakes. This is a problem, since as the parent of small children you are always about to fall asleep anyway, so in order to avoid a pancake-induced coma you have drink even more coffee than you are already drinking, which means that when you are finally able to go to sleep, you instead stare at the ceiling and see cups of coffee swimming before your eyes. It’s a terrifying vicious circle of pancake consumption and sleep deprivation and it ends with the children in the orphanage. The memoir is forthcoming.

So you start looking for other recipes. 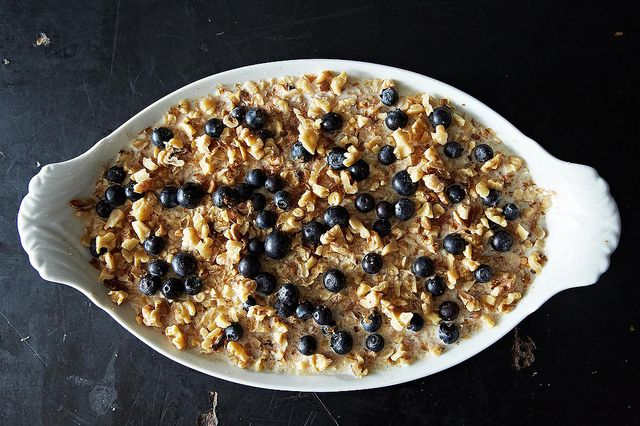 For all intents and purposes, Marion Cunningham’s The Breakfast Book is the only cookbook you need to consult before 11am. It is hugely charming; it is eclectic; it is comforting and weird in equal measure. There are fantastic muffin recipes and then there are things like spicy, sweet-sour orange slices (which are also fantastic). It’s highly domestic escapist literature.

But I am incorrigibly promiscuous and sometime last year I cheated on The Breakfast Book: I made the baked oatmeal from Heidi Swanson’s Super Natural Every Day. I have made it a half-dozen times since. It’s fruit layered with milk-soaked oats layered with nuts. It’s wholesome but not so wholesome that it is caught trying to be wholesome. And it is narcolepsy-proof.

Not least, it is different enough, and sweet enough, to feel like a special occasion. To feel like weekend-only breakfast. And if it deviates slightly from the rules laid down by the American father for weekend-only breakfasts, it respects the basic formula: when he makes it, everyone feels very grateful and thanks him profusely and trots out their high-grade adjectives. I speak from experience. 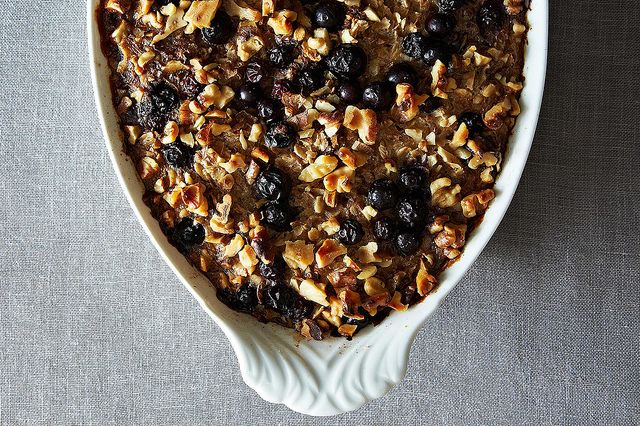 Ashley W. March 12, 2014
I am having to eat dairy free while breastfeeding, do you think I could substitute the milk for almond milk?

atriviale June 24, 2013
I made this on Saturday morning and it's now hard to imagine wanting to eat oatmeal any other way. It was delicious.

suzannea June 24, 2013
That should have been cadence not chance. So sorry, autocorrection error.

suzannea June 24, 2013
This sounds delicious. Your chance brings to mind, "Where The Wild Things Are."

cuceesprouts June 24, 2013
It is now my most favorite breakfast recipe. I posted it on my blog a while back http://cuceesprouts.com/2011/06/baked-oatmeal/

GretchenJoy June 23, 2013
This is in regular rotation around our breakfast table. I double the recipe every time and bake it in a big lasagna dish. There are NEVER any leftovers. When the kids catch the scent of it baking in the oven they race to the kitchen to make sure there's enough for them.

tigerlille June 23, 2013
Honesty compels me to report that I made this recipe with very high expectations in March. We hated it.

SuzanneR June 23, 2013
Made this for breakfast today. Used frozen blueberries (didn't bother thawing) and skipped the extra melted butter on top. Loved it!

Loren J. June 23, 2013
i wish you had a vegan substitution for this recipe it looks [email protected]

ValerieClarkNY June 23, 2013
very amusingly written and the recipe looks good too. Loved your aside about how, after adulthood, spinning around makes us think about death rather than hallucinate pleasantly.

Chbrown June 23, 2013
Would it be possible to use steel cut oats for more nutrition and toothiness?
Author Comment

lkbee June 23, 2013
Looks like an amazing recipe! Do you know if this refrigerates and/or freezes well?
Author Comment

Ruth E. June 23, 2013
Love your writing style. And this baked, extremely low-sugar, gluten-free breakfast idea. Oatmeal is recommended for breakfast to provide a large amount of slow-burning carbs (turning to the sugary material our brain uses) that will last for a few hours.

Nancy W. June 23, 2013
Do you have to put bananas on the bottom? I really do not like them and would hate to have the taste of them all through what sounds like an awesome recipe!
Author Comment

bugawa June 23, 2013
My kiddos definitely prefer this without the bananas-- chopped apples, peaches, or more berries have all worked well for us.

Kenzi W. June 20, 2013
He never really made breakfast, but I remember my dad making meatloaf on occasion. I was very young. Had I known them, I probably would have trotted out my high-grade adjectives.

Angela June 20, 2013
love the cheating on Breakfast Book story! that's a bible in our house too! but Heidi Swanson's a pretty good cheat! :)