Today: We promise, they eat this for breakfast somewhere. 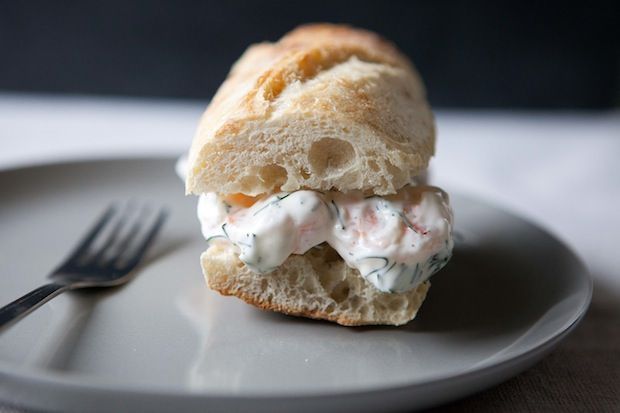 There is almost nothing that signifies summer in Norway more than a sandwich of crusty white bread with tiny arctic shrimp, mayo, lemon, and dill. Quite simply, it is summer. In digestible form.

In Norway, a shrimp sandwich is a perfectly acceptable meal at any time of the day.  You’ll find shrimp sandwiches (sometimes also with sliced hardboiled egg on top of the shrimp) for sale in cafes.  For supper you might have a complete reke aften, or shrimp evening -- sort of the Norwegian equivalent of a clambake, where you sit for hours with a giant bowl of freshly caught and cooked shrimp, peeling them, assembling them into sandwiches with a smear of mayo and plenty of dill, and drinking far, far too much white wine. And for breakfast you may have rekesalat, shrimp salad, on your morning slice of bread.

My old tante Mari, my great aunt, was something of a rekesalat fiend. At least, I assumed she was because we would always buy a plastic container of the goopy, mayo drowned stuff they had in the grocery store to have around for breakfast when she was with us in the summer. I never understood the appeal, until I got over the commercial variety and started to make my own, fresh. It’s like a way of extending your reke aften into the next morning! And that, believe me, is a grand thing. I thought of my tante Mari the other morning when I remembered I had some leftover shrimp in the fridge, and so I made myself a shrimp salad sandwich for breakfast and basked in every bite of summer. 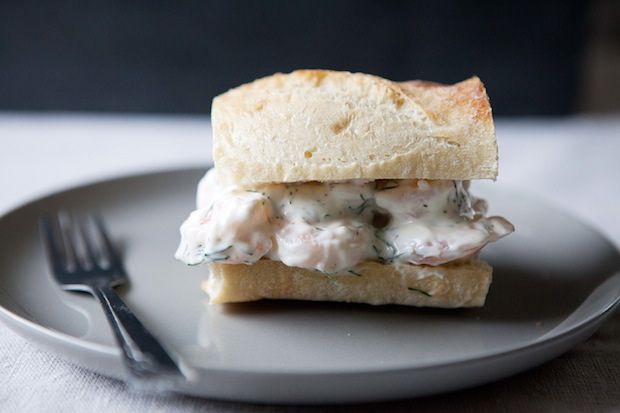 Margo August 4, 2013
This looks amazing, I think I better run out to the store and get some shrimp! :)
Author Comment

Margo August 6, 2013
I made this yesterday! So yummy! My boyfriend really loved it. So easy but satisfying! I wish I could share a picture of it. A+++ :)
Author Comment

Stubor August 1, 2013
I've just learned how to make my own mayo, a bit of heaven that, and how to make crème fraiche, and I made my first gravlax which meshed nicely: http://food52.com/recipes/18418-gravlax
Okay, I am going out to find some shrimp now.

fiveandspice August 2, 2013
How lovely! Homemade mayo and creme fraiche definitely up the ante!

blanka.n August 1, 2013
This is just the loveliest and (fresh??) recipe for shrimp salad. I know I couldn't eat it for breakfast but anytime after 11am I'm there! Can't wait to try it.
Author Comment

fiveandspice August 2, 2013
Well, luckily you don't have to eat it for breakfast because no one will look askance at you for eating it for lunch or dinner! :)

Deej August 1, 2013
Looks good to me and I'm thinking that eating a shrimp sandwich breakfast lunch or dinner has nothing to do with being Scandinavian!
Author Comment

ChefJune August 1, 2013
I would SO eat that for breakfast! Or serve it to loved ones. Then again, I grew up in the part of Chicago known as "Andersonville" because there were so many Scandinavians. The Swedish Museum is there. I love(d) going to Schott's for Swedish/Norwegian deli. It's still there, but so different now. Just please don't serve me any lutefisk...
Author Comment

fiveandspice August 2, 2013
We never ate lutefisk either! My mom just kind of harumphed at the idea when people would ask and would say, "I grew up in Oslo. Lutefisk wasn't city-people food." hehe.