How to Cook a Lobster

Today: Get yourself to a shoreline and melt some butter -- this is how to cook a lobster. 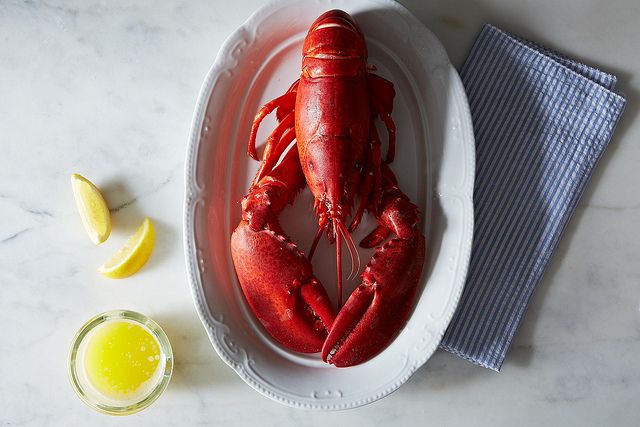 It's a tough time to be talking about lobster. They're no longer just the reason to amble along Route 1 in Maine, and butter versus mayonnaise -- while very important -- is no longer the hot button issue.

New studies show that lobsters may, in fact, feel pain -- and that maybe we should think twice about cooking them the way our mothers did and their mothers before them. (You got me -- I have a Mainer for a mother.) There's a lobster shell disease plaguing the Northeast. The price per pound has plummeted in recent years, causing hardship in the lobstering industry.

But it's August -- there are lobster boils and clam bakes to be had. Lobster rolls and seersucker napkins and picnic tables await. Pools of butter await, too, and so do ears and ears of corn. And because they do, here is how we cook lobsters.

At the Market
Whatever your cooking method, this is the hard truth about lobster: if you want it to be good, it has to be alive when you bring it home. With lobster, cognitive dissonance is not allowed -- like other seafood, it goes bad quickly, but unlike other seafood, lobsters have especially aggressive digestive enzymes. Read: once killed, lobsters will break down at a much faster rate than their underwater brethren. So make friends with a fishmonger, and get them while they're still energetic, alive, fresh.

In Your Kitchen
This is the part where no one can agree. What's the most humane way to cook a lobster? PETA would tell you that a humane way doesn't exist, Jaque Pepin would teach you the knife method, and many more would endorse a quick stint in the freezer to put the lobsters to sleep before cooking.

This is also the part where we know something they don't know. 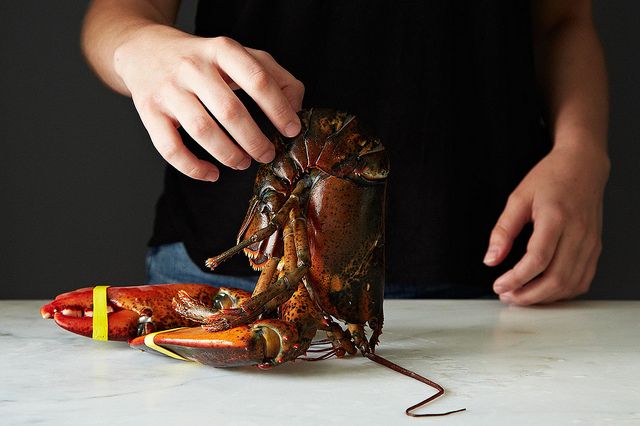 Before You Cook, Do Some Yoga
We're talking about the actual lobsters, but if you get nervous about working with your dinner while it's alive, you might benefit from a headstand or two yourself. This is a method that my mother taught me, and her grandmother taught her: they call it hypnotizing the lobster, or putting it to sleep. What it is, in reality, is a little head rush, but the effect is a bit magical -- stand your lobsters on their heads, supported by their claws, and they'll calm down almost immediately.

My mother would tell you that stroking the tail is key. My grandmother would too. I've done without it, and it still works -- just make sure you tuck down their tails, not unlike how you'd pull your knees into child's pose. Your lobster is now centered. 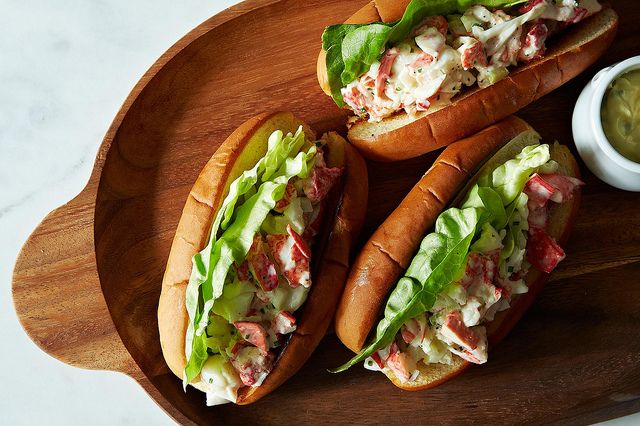 Ready? Let's Cook.
We cook them whole because we like to have at them, rustic-style -- bibs and bowls of butter and all -- once they're finished. But if you want to push the boundaries of tender lobster meat, you can separate the claws and the tail, as the first will generally cook faster than the second. (Or, if you want to be all Food Lab about it, you can try Kenji's steam-then-roast method.)

When you cook, forgo boiling -- steaming is a gentler method, and it tends to cook more evenly. And, as Kenji over at the Food Lab notes, with all of the water circulating in and out of the lobsters during boiling, you'll lose a lot of the flavor. Which is the primary reason why we eat them, after all. (Aside from the butter.)

Let's get to it: while your lobsters are relaxing, bring 2 inches of water to a rolling boil. (Your cooking water should be as salty as the sea, or if you're lucky enough to be near it, it should actually be the sea.) Now take your subdued lobsters, and place them in the pot -- this is where they'll steam for the next 8-10 minutes, if they're around a pound and a quarter.

You'll want to eat it now, we're assuming. Break it down, and dig in -- and don't forget the bib.

Have a different method? Tell us what you do -- and why -- in the comments!

Michek September 29, 2020
I do steam them with white wine, tarragon and few peppercorns...

Maria July 1, 2019
I'm grateful you included the link for PETA's website about the cruelty these complex, sentient beings endure for our pleasure. I'm done taking part in this cruel ritual. Why are my needs and wants any greater or of any higher priority than another living creature? Certainly, they are not.

Dave K. May 27, 2017
Being born and raised in New England I've always known that lobsters can feel pain. In the winter they leave the coastal areas for the warmer water in the Gulf Stream. If they didn't feel pain then why would they do that? Also in the 50s when I was a kid we could buy a bushel of the bodies without the tails or claws fo 50 cents. My parents and friends would buy several bags and take them to our friend's summer farm in NH. They would put them in the middle of a table and marticoulsly pick the meat out of the bodies and knuckles with a cold beer. Made fantastic lobster rolls for all.

A C. September 4, 2013
We tried the yoga method last week in Maine with two 3.5 lb fiesty lobsters. The first one, who was kicking and screaming with huge claws, zoned out in seconds and never moved after that. The second one went with a fight but eventually got there. It was the most amazing thing to see them go from crazy to relaxed in seconds. We left them in the sink for 15 minutes and they moved a little going into the pot but settled right down. The soft shells who didn't do yoga almost pulled the lid off. I wouldn't have believed it if I hadn't seen it and we have the pictures to prove it! Definitely try it - it's our go-to method from now on!

Ms S. August 23, 2013
I steam them in 2 inches of salted water or use seaweed - the kind with and water 'pods' I get from the fish monger

LauriL August 23, 2013
Great and motivating article for this Saturday nights supper on the shores of Maine! More bibs and more butter please!!!

Nina U. August 22, 2013
To cook it like lobster fishermen do in Nova Scotia add a four to five inch of eel grass (found along many Maritime beaches) and an inch or two water to a large pot (stock pot size) with a lid. Get the water boiling. The eel grass will add natural sea salt and act as rack keeping the lobster out of the boiling water so they stream. This sometime done on the nearest beach over a drift wood fire. We used to stop on the shore to pick up eel grass after we bought the lobster on the wharf on the way home.

PeggieP August 21, 2013
So wonderful to have found this site!! Great to know some folks have the same questions and others have answers!

PeggieP August 21, 2013
Thank you all for the great suggestions! I do love whole lobster Kenzi but I got a great deal on 20 so I broke them down, cleaned & roasted the bodies for stock & froze the tails in shells for cooking a few at a time. Yes I know that's a crime to do to fresh lobster --but we can't eat 20!) BBQ sounds great to try! But if I steam just tails from 1-1/4 pounders does 5 min sound about right?

Nancy August 21, 2013
I recently used a pressure cooker on lobsters who had spent some time in the cooler. Thrashing was minimized, and the bugs cooked quickly, but I did have to cook them one at a time.

Leilani August 21, 2013
Is there a minutes per pound rule for steaming? Or a way to tell my lobster is done? I've cooked lobsters up to 5 lbs, and had to guess. Thanks!

Kenzi W. August 21, 2013
Yep! I mention 8-10 minutes for every 1 1/4 pounds to 1 1/2 pounds in the post. Another trick my grandmother taught me is that they're done when the antennae pull out fairly easily. A caveat, though: she likes hers cooked a bit more than I do.

Inimini August 21, 2013
Truly love bbq lobster. Cut the lobster in half lengthwise (I know it's cruel and I still find it hard to do but it will die instantly and next time I will hypnotize it first). Cook them over a bbq with the meat side down first and then turn around. Depending on size it should take a couple of minutes on each side. You should be able to see when they are done. Put them on a plate and drizzle some hollandaise or 'beurre blanc' over them for an even bigger flavor explosion. The shells make for an excellent bisque too.

PeggieP August 21, 2013
Suppose you only want to steam the tails... How long? I keep over cooking them!

Kenzi W. August 21, 2013
Are you breaking down lobsters to cook only their tails? Or are you buying just the tails? I'd recommend just cooking them whole and breaking them down after they're cooked -- there's so much goodness in the whole lobster, and you can reuse the shells to make stock!

smslaw August 20, 2013
Lobsters are a tasty, albeit messy, treat. Here's a tip: After cooking, snip off the tips of the claws with kitchen shears and let the accumulated liquid drain out. I concur with steaming not boiling. Save the carcass/shells for stock which makes a mean risotto or bisque.