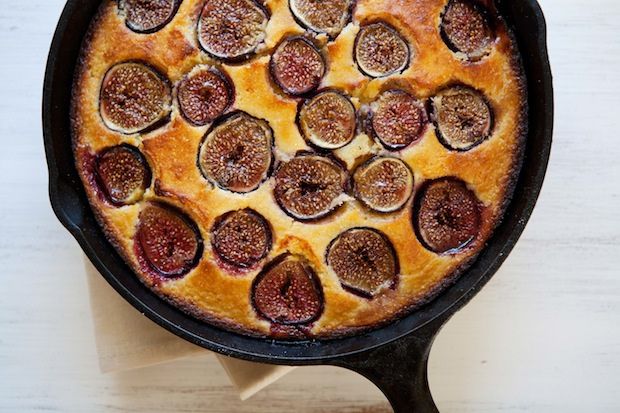 I’ve always felt like cornbread makes an even better breakfast than it does a dinner side.  Something about the way it takes as well to an egg or a smudge of soft cheese -- as it does to honey or jam -- just says breakfast to me.

I know passions run high about what makes for legitimate cornbread, and I don’t claim to know what’s right. In fact, call me undiscerning, but I like cornbread in most every variation, if it’s breakfast time. Depending on your recipe, cornbread can be more savory or more sweet. It straddles the border between toast for breakfast and cake for breakfast, which is not at all a bad liminal space to be in. When I take it ever so slightly in the cake for breakfast direction, I also like to fold fruit into my cornbread. It makes me feel more justified when I want to eat two slices.

This was originally going to be a blueberry-studded cornbread, but then I found fresh figs. Fig season feels so fleeting, especially here where figs don’t grow and good fresh figs rarely make an appearance. I snatched them up and scattered them atop the cornbread to bake into figgy, jammy jewels. I thought they were perfect with the tender, nubbly crumb of the cornbread. Add a dollop of ricotta, and that’s a breakfast. 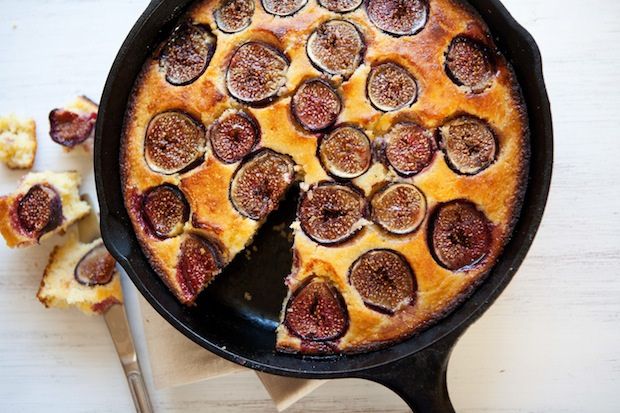 Stephanie S. October 4, 2013
I made this last week using a little bacon fat to grease the cast-iron skillet. It turned out visually beautiful but perhaps a tiny bit dry - I wasn't blown away by the cornbread itself. This was a hit with everyone who tried it!
Author Comment

Embrosia September 25, 2013
Thank you,Emily, I must make this. But for me I think 1/3 cup sugar will be plenty.
Author Comment

sarabclever September 25, 2013
I'm torn between eating the figs in my fridge fresh, or making this. Love breakfast food like this; looks amazing. I assume I can use polenta here?
Author Comment

Rosanna September 17, 2013
Hola! I want to try this recipe but dont know what cornmeal is in spanish? Is it like corn flour? Thank you for your comments
Author Comment

fiveandspice September 23, 2013
Hmm, I don't really kno what it would be called. It's more coarsely ground than corn flour.

Elaine September 7, 2013
Making this today with figs ready fir picking from my tree. Thanks for this innovative recipe!
Author Comment

fiveandspice September 7, 2013
Lucky you to have a fig tree, yum. I hope you enjoy it!

Fairmount_market September 5, 2013
This looks delicious. I think I'll a variant with small Italian plums that are dropping from trees by the bushel here.
Author Comment

fiveandspice September 7, 2013
Ooh, yes, I bet plums would be wonderful.

Angela B. September 5, 2013
Wow! This picture is beautiful! I love the idea of adding figs to cornbread! Really great recipe...looking forward to trying it out this weekend!
Author Comment

fiveandspice September 7, 2013
Thank you! Hope you like it as much as we did.

amysarah September 5, 2013
This looks wonderful. Makes me wonder about a variation - figs wrapped in bacon are delicious (an Eric Ripert thing,) and cornbread made with bacon fat (or flecks) is classic....so maybe those flavors could get together in your recipe. Gilding the lily too much?
Author Comment

fiveandspice September 7, 2013
Definitely not overgilding! That's an amazing idea! I may have to try it myself!

Kenzi W. September 5, 2013
Totally gorgeous, and on the to-do list for this weekend. Thanks for the recipe!
Author Comment

aargersi September 5, 2013
Cornbread is good any time of day! I will chuck figs into mine soon!!! My neighbor is nuts for my avocado cornbread (in case you want a more savory solution for lunch :-)

Marian B. September 5, 2013
Whoah! Do you purée the avocado or slice it? Also, Emily, this looks amazing.

aargersi September 5, 2013
Chunks - and corn too - I was worried it would turn a weird color the first time I made it but it's fine! Seriously - I make the neighbor this instead of cake for her BDay:
http://food52.com/recipes/17979-avocado-cornbread
Author Comment

fiveandspice September 5, 2013
Yum, yes please I would like that for my lunch! :)