Lunch for the First Day of School 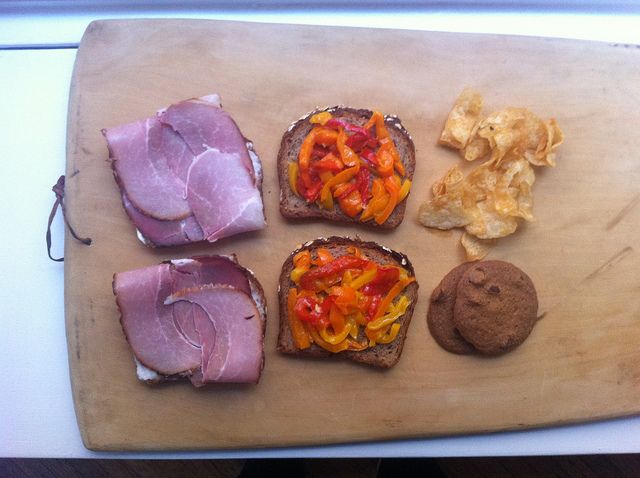 Today was the first day of school, which means our kids are back to more fully-formed lunches, and I'm back to assembling foods before I'm fully coherent. I hope you'll be patient with me as I get my bearings. One of the end-of-summer dishes I most like to make is peppers simmered in olive oil and garlic. I slice the peppers as thinly as my knife skills allow and after warming a smashed garlic clove in a thick layer of oil, I dump in the peppers and let them cook at a rapid simmer until they've loosened up and the oil is nearly orange. Then I use them for everything -- as a side to pork chops, in salad topped with an egg, and on sandwiches, like the one here.

For lunch I made a smoked ham and peppers sandwich, with potato chips and a chocolate chip cookie on the side. All-American classic sides and a sandwich with a little twist. Now, off to second grade!

Kdrusnak September 12, 2013
Another beautiful lunch! We bring our own too! And will add this to our repertoire. Did you make the ham and bread? If not where did you purchase it? Any specific source or brand for both ham and bread? Looks delicious! Thank you for a wonderful site!
Author Comment

Amanda H. September 12, 2013
I wish I could say I made the ham and bread, but alas, I did not! The ham is made by Schaller & Weber: http://www.schallerweber.com/ And the bread comes from Pain D'Avignon, I think. It's a dense, lightly sweet, multigrain, and I use it often for lunches. Thanks for your comment!