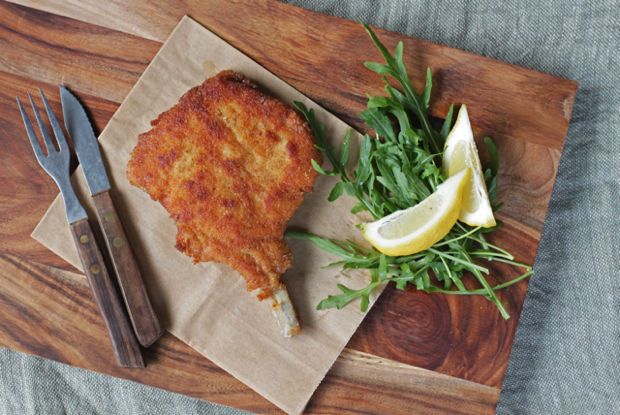 Crisp, golden breadcrumbs coating a tender veal chop: the cotoletta or costoletta alla milanese is a classic of Milan's cuisine, up there with saffron-stained risotto, osso buco and panettone. It gets its name from the cut of meat traditionally used, la costoletta, an inch-thick bone-in veal chop, which would correspond to a prime rib cut, such as rib eye. A second version of the cotoletta is made with a beaten-out-till-enormous-but-thin cutlet of veal, aptly called l'orecchia di elefante (elephant's ear), as reference to its size and shape. It's for those who like their fried goods crunchy all the way.

The Milanese can get a little defensive if you happen to suggest that their cotoletta is comparable to Vienna's weiner schnitzel, and will proudly point out that their cotoletta has been a specialty of the Lombardy region since the twelfth century. Recorded in documents from 1134, a meal of lombos cum panitio (breadcrumbed rib chops) was one of nine courses for the festival of San Satiro. It's mentioned again in 1492 in a recipe in Maestro Martino da Como's famous manuscript. The dish was even transported to Argentina where it became adapted to local tastes and is known as milanesa, a homage to its city of origin. 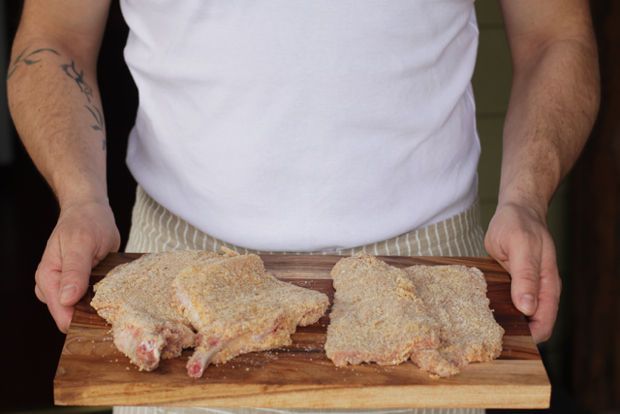 It's easy to see why this simple, delicious dish is so loved. Essentially, a veal chop is passed through beaten egg, then breadcrumbs and the chop is fried in an indecently large amount of clarified butter until crisp -- older recipe books used to instruct pouring the leftover butter on top of the cotoletta just before serving but now, a little more health conscious, a lemon wedge is usually served instead. It's easy to make -- especially when following a few golden rules for that perfect crumbed coating.

Keep that coating on: Traditionally, cotoletta alla milanese is made with just egg and breadcrumbs -- but dusting it with flour as well helps keep the breadcrumb coating on. Don't put salt on the meat or in the coating as it will lead to the breadcrumbs falling off -- season at the end. As soon as you put the chop in the pan, do not touch it until it's ready to turn. One turn only.

Keep it crisp: Leaving the breadcrumbed chops to rest in the fridge for at least thirty minutes before frying will result in a crisper coating. Pan fry on medium heat; too cool will result in a soggy breadcrumb coating, and too hot will burn. If you notice your pan getting too hot, adding some cold butter is a good way to even out the temperature quickly.

Cotoletta is usually served with a lemon wedge to cut the fried-in-butter goodness, but after all that work to get the perfectly golden, crisp breadcrumb coating, some may think it's a bit counterproductive (it immediately turns the coating soggy). Better would be to serve it with a glass of wine, a sparkling Franciacorta would do the trick. 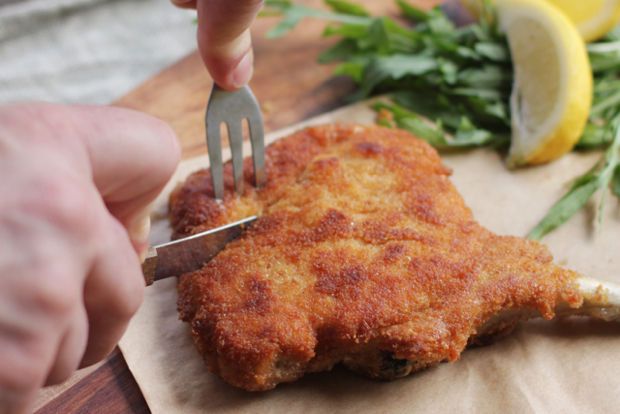 Meg November 18, 2013
This is my absolute favorite Italian meal!

rickwoodland October 15, 2013
Well, to me, of Italian-American decent, Veal Milanese is a veal chop where the meat of the chop is pounded thin and sautéed in olive oil and butter. Maybe this is just a fancy name for the same preparation.
Author Comment

Emiko October 16, 2013
Yes, as Valentina said earlier, Veal Milanese is the English translation for cotoletta alla milanese, the original, Italian name for this dish. A veal chop is most traditional in Milan but abroad you can also commonly find this done with cutlets/scaloppine/escalope etc, along with the 'elephant's ear'!

Brette W. October 15, 2013
I love these tips for frying cutlets -- had no idea about letting it rest!

amysarah October 15, 2013
Absolutely - in fact, one of my family's favorite meals is veal Milanese (pretty much the same thing) with a salad - arugula or whatever - with a pungent vinaigrette, served next to, underneath or on top. What made it possible on a weeknight was breading the cutlets in the morning before work, and leaving them on a waxed paper lined sheet pan in the fridge, so they only needed to be fried up at dinner time. The breading adheres every time! (Also: I often use pork loin or tenderloin, pounded into thin cutlets - way cheaper and equally tasty.)
Author Comment

Emiko October 16, 2013
Thanks Brette! Believe me, it's taken a lot of trial and error and a lot of cotolette eating over the years to find that perfect balance of crisp coating and juicy meat, and the resting is part of that!
Author Comment

Emiko October 16, 2013
Amysarah, that's the perfect way to do it. I'm also a fan of pork, it does work very well breaded like this too - I don't pound them though, I like them thick and juicy! ;)

rickwoodland October 15, 2013
How does this differ from Veal Milanese?

Valentina S. October 15, 2013
Well, this is the original recipe with the italian name - Cotoletta. The original recipe uses a chop, like the one you see in the picture. I guess 'Veal Milanese' is just a generic way to call other cuts of veal prepared this way, like an escalope.

pierino October 16, 2013
The English have an inner urge to anglicize everything (the French are even worse). But in Italian cotoletta implies veal (vitello)unless otherwise specified. The Bolognese version is still veal but includes prosciutto and parmigiano. But of course Parma is a near neighbor to Bologna. Another term is "costoletta" because chop includes the rib bone.
Author Comment

Emiko October 17, 2013
Exactly. And 'costoletta' (the rib, which is described above) is where the word cotoletta comes from - both are used to describe this dish.