All this week, our friends Allison and Matt from Robicelli's will be sharing recipes from their cookbook Robicell's: A Love Story, with Cupcakes, hosting a Twitter chat today, answering our questions, and giving away a book every day.

Today: Thanks to the Robicell's, cupcakes are now officially acceptable for breakfast consumption. 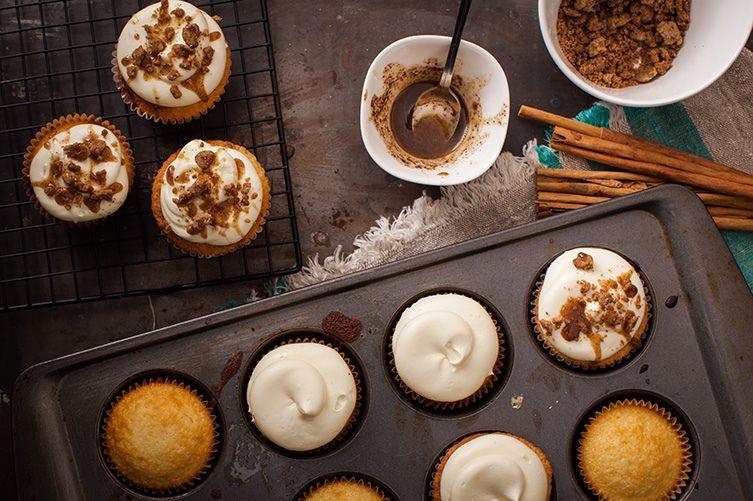 What’s more comforting on a cold, rainy day than a warm, gooey cinnamon bun? Maybe curling up in a soft robe with a nice hot cup of tea, watching bad movies on Lifetime starring Valerie Bertinelli as some sort of woman “scorned.” Or lying on the couch while an entire litter of kittens sleeps peacefully on your chest. Or sitting in front of a fireplace doing crossword puzzles while listening to Sade’s smooth-as-satin voice.

Okay, maybe there are a lot of things more comforting than cinnamon buns, but you know what? You can’t eat kittens or Sade, so there. The key part to any worthwhile cinnamon bun, in our opinion, is the sticky “goo” that oozes out. So rather than make just a simple cinnamon cake, we dot ours with a cinnamon sugar mixture that sinks to the bottom during baking and oozes out when you unwrap it. There’s no shame in using a knife and fork to eat this one.

Want to win a copy of Robicellis: A Love Story, With Cupcakes? Tell us in the comments: What's your dream breakfast cupcake? We'll choose one random winner each day, and announce them this Friday! (Unfortunately, we can only ship books within the US.)

SweetLisa October 24, 2013
Hmm..I think a buttery sweet cupcake with a bit of cornmeal in the batter and Vermont cheddar with candided bacon and chopped smoky ham!

Molly October 23, 2013
So many good choices! But I think a blueberry pancake cupcake, with either cream cheese or even a more-on-the-savory-side buttercream frosting would be divine.

afielder October 23, 2013
I would love a corn, bacon, and maple cupcake

Kelsey October 17, 2013
Inspired by my favortie pancakes (from the Griddle in L.A.) kahula batter with irish bream whipped frosting

missfats October 16, 2013
A cupcake inspired by my favorite gourmet donut: butterscotch bacon (from Nightwood in Chicago)

JulieBakes October 16, 2013
I second what KP said! Maybe with a little bacon (candied or plain) on top :)