All this week, Sue Conley and Peggy Smith from Cowgirl Creamery will be sharing recipes from their forthcoming cookbook Cowgirl Creamery Cooks, answering our questions, and giving away a book every day.

Today: A lesser-known onion soup from France that vegetarians can enjoy, too. 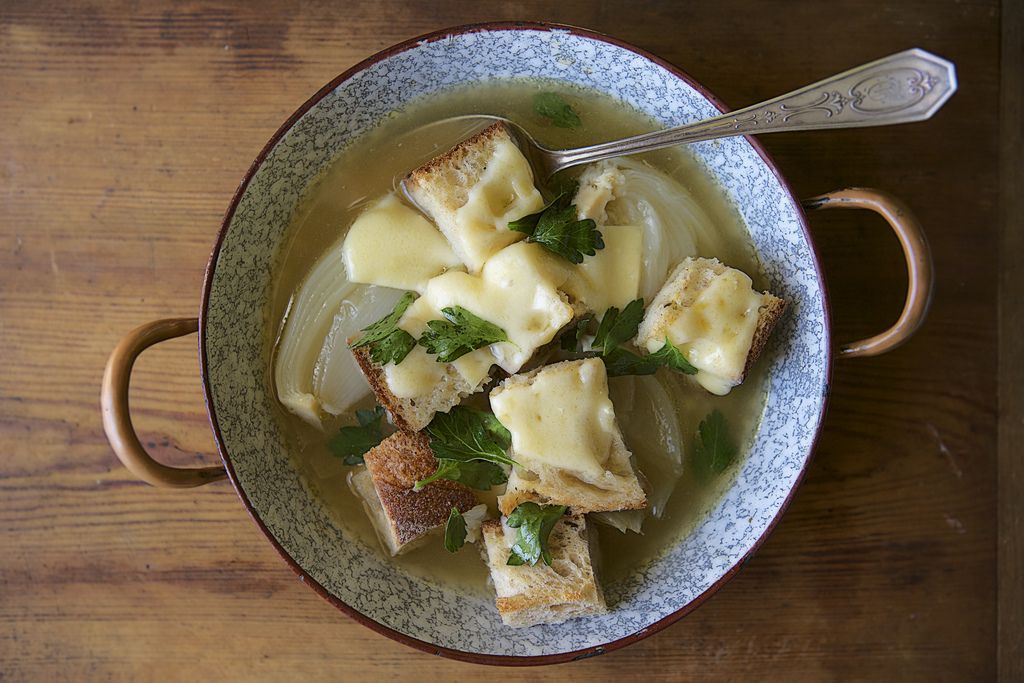 A panade is a broth thickened with toasted cubes of levain or bâtard bread, creating a hearty, soulful soup. It’s a lighter, fresher version of French onion soup, and can be served to vegetarians because it’s made with a cheese broth instead of beef or veal stock. It’s also much faster to make than the old standard. A mountain-style cheese such as Gruyère, Comté, or Pleasant Ridge Reserve works best here for two reasons: The cheese becomes elastic and holds its texture in the hot liquid, and the flavors of the soup -- the yeasty bread and sweetness of the caramelized onions -- are reminiscent of the flavors in the cheese. The onion-garlic confit gives this soup wonderful flavor, but if you like, you can make this recipe simpler by using chicken stock and quartered onions, as shown in the photo.

Panade with Gruyère and Onion-Garlic Confit

Want to win a copy of Cowgirl Creamery Cooks? Tell us in the comments: What's your go-to cheesy soup? We'll choose one random winner each day, and announce them this Friday! (Unfortunately, we can only ship books within the US.)

cowgirlcreamery.com
Cowgirl Creamery launched in 1997, but our story began well before then. We met freshman year at the University of Tennessee where, little did we know, a lifelong friendship and infatuation with food would ensue. In 1976 our journey westward began. Once arriving in the Bay Area, we became involved in the burgeoning food movement at Chez Panisse and Bette's Oceanview Diner, both in Berkeley, CA. By the early 1990s, we were ready for a new challenge when we decided to launch Tomales Bay Foods, a marketing vehicle to help West Marin's farms and dairies get their delicious products into the hands of the Bay Area's finest chefs. From there, we decided to make our own cheese using the milk from neighboring Straus Family Creamery. Two decades, two creameries, four retail stores, and two thousand tons of cheese later, we still love what we do and have decided to bring our stories and recipes (dishes that use cheese not how to make cheese) to you in our first cookbook, Cowgirl Creamery Cooks.

Amy L. October 29, 2013
Would love a ccopy of your book. I fell in love with Mt.Tam among others several years ago when visiting family in DC. Planning a trip there over thanksgiving cooler in tow, can't wait!!

J.B. October 28, 2013
When I find their cheese at my local Whole Foods it gets devoured with two days. I would need to struggle to save it for soup. But saving the rinds is a stellar idea.

Retta J. October 26, 2013
I always have a multitude of parmigiano reggiano rinds peeking out of the basket drawers in my freezer that always find their way into hearty beef stews. I am, however, powerless over a slowly cooked French onion soup, with leeks, red, and yellow onions slowly caramelized and combined with a wonderful homemade beef stock. Many use provolone for the top, but I cannot resist the nuttiness of a Grueyre. I slowly chisel away at the bits of goodness. I know it is old school, but I just can't find a proper replacement!

Amy N. October 26, 2013
I like cheddar beer soup and I also make a delicious cheese and vegetable chowder.

J.B. October 26, 2013
I have two similar recipes for Brie Cheese soup. The Brie Soup would be divine with a similar cheese from the girls at the Creamery. This is my kind of soup even if some folks call it soup for a sick day. Soothing, satisfying.

K_Squared October 25, 2013
Not really a huge fan of creamy/cheesy soups, but cheese IN soup - another story completely! French onion topped with oodles of cheese or basic tomato with cheddar sprinkled on top :)

infotrop October 24, 2013
When I make Broccoli Soup with Cheddar Cheese, I can almost pretend it's super healthy...

Victoria M. October 24, 2013
Love Fontina soup, cheddar soup, any kind of vegetable-cheese soup, but this one definitely takes the cake! It's going in the cookbook now.

LucyS October 24, 2013
Not really a soup but obviously cheese on top of chili. And a bit added to a nice potato leek soup...

patsylu October 24, 2013
I don't have a go to cheesy soup but I love to add lots of freshly grated parm to pasta fagioli.

AntoniaJames October 24, 2013
When I make my own "ricotta" (yes, I know that what we call "ricotta" here is not the true "re-cooked" stuff), I use the whey instead of stock in creamy vegetable soups, particularly cauliflower. I usually stir in a couple tablespoons of good parmigiano reggiano or percorino romano as well. Ricotta whey also makes marvelous polenta. ;o)

Desert D. October 24, 2013
There's a stilton cheese soup recipe I got from my mother that is absolutely swoony. I've never seen anything like it.

cucina D. October 24, 2013
Oh my! This is simply my new best recipe using all my favorites in one bowl.... thank you for posting and sharing and it has been way too long since I made my own Parmesan broth using the rinds, etc. Fabulous find for food files.

AntoniaJames October 24, 2013
Whoa. That Onion-Garlic Confit is going straight to my must-try list. As is the Pleasant Ridge Reserve (which my younger son will bring home from WI when he returns for Thanksgiving). ;o)