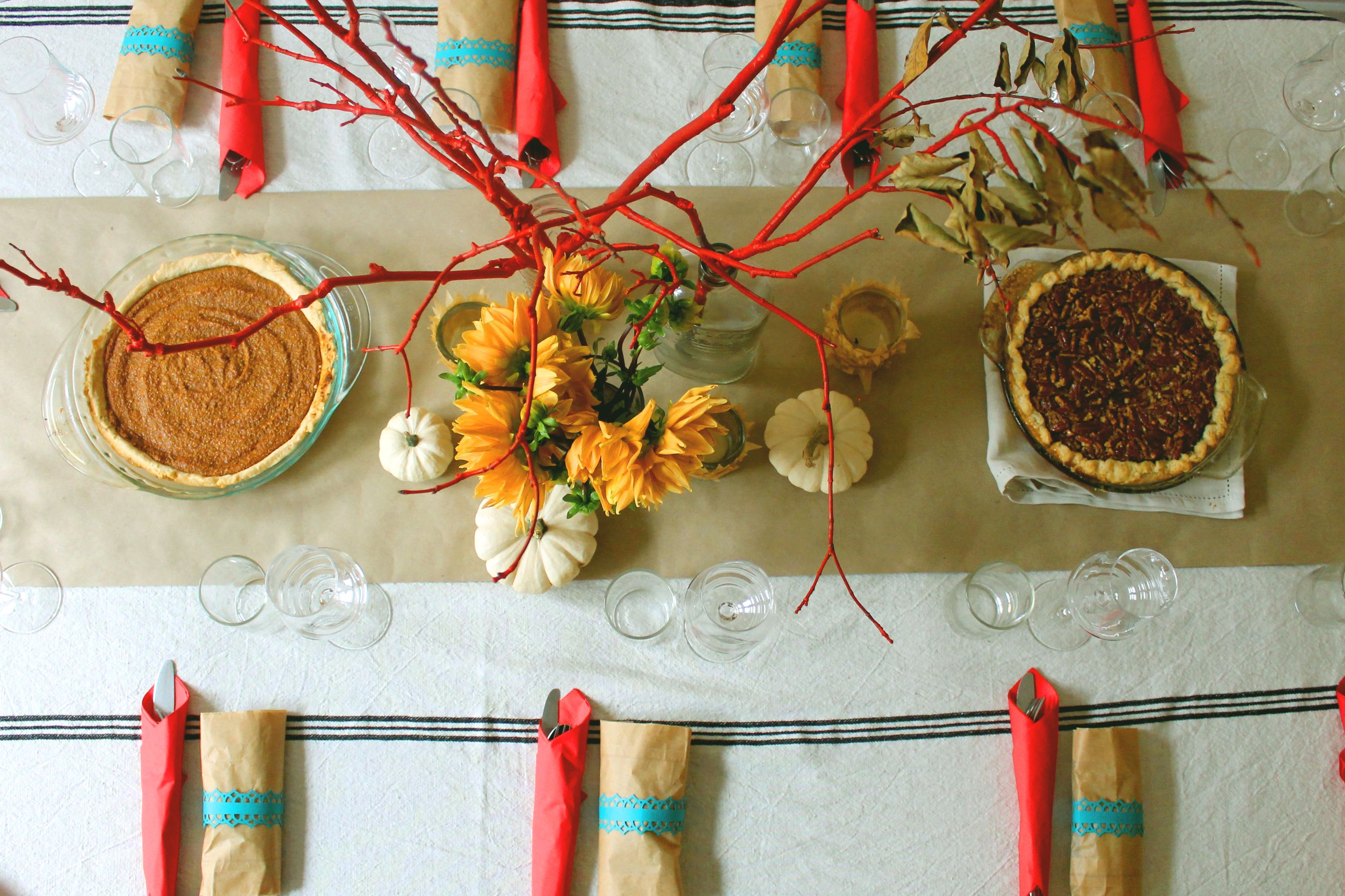 Here's something I don't admit to much: I don't love to host dinner parties. In my personal life, I err towards laziness and, truth be told, I'm a bit of a lush. That doesn't jibe well with extensive planning and grocery shopping, with making sure that a table is set perfectly, then staying sequestered in the kitchen ensuring that every dish comes out of the oven at a specific, pre-designated time. No, I'd much rather sit back and have my wine glass refilled as I stuff my face and socialize.

But when Marian emailed Anna and me to see if we could throw a Friendsgiving party for 10 friends for under $150, I couldn't help but be drawn in by the allure of hosting my very first Thanksgiving dinner.

We immediately created a Google spreadsheet to narrow down our invitation list, brainstorm dish ideas, split up responsibilities, and make sure that we were keeping in line with our budget. Yes, spreadsheets make me cringe too, but it proved to be a life-saver.

That didn't mean we were completely immune to stress. 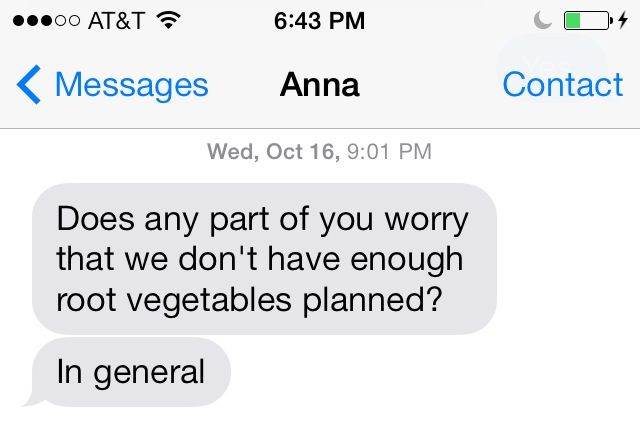 Since we had a guest list full of vegans, vegetarians, and the gluten-intolerant, we had our work cut out for us. We decided to forgo the turkey in favor of two smaller chickens, and asked our guests to bring wine to keep costs down. Then we tracked down Food52 recipes for dishes that would form a cohesive Thanksgiving feast, one that was affordable without being austere:

Something very important to keep in mind when you're hosting a Thanksgiving dinner is that everyone involved should know their strengths. For example, I can barely work a hot glue gun, so Anna was entirely in charge of the decor.

Another thing to remember is that everything that can go wrong, will go wrong. Before I got to Anna's house for the remainder of the day's cooking, I was tasked with preparing a pumpkin pie. The full-sized food processor I borrowed from a friend wasn't working, so I had to split the recipe into five parts and get it going in my teeny tiny individual-portioned size food processor. (Of course, I had stayed out too late the night before and was doing this in a nightie, with my eyes barely open. My poor food processor was subject to a barrage of cursing.)

When I got to Anna's, I immediately put the pie in the oven and got going on the stuffing as she finalized the decor, the party favors, and the pecan pie. 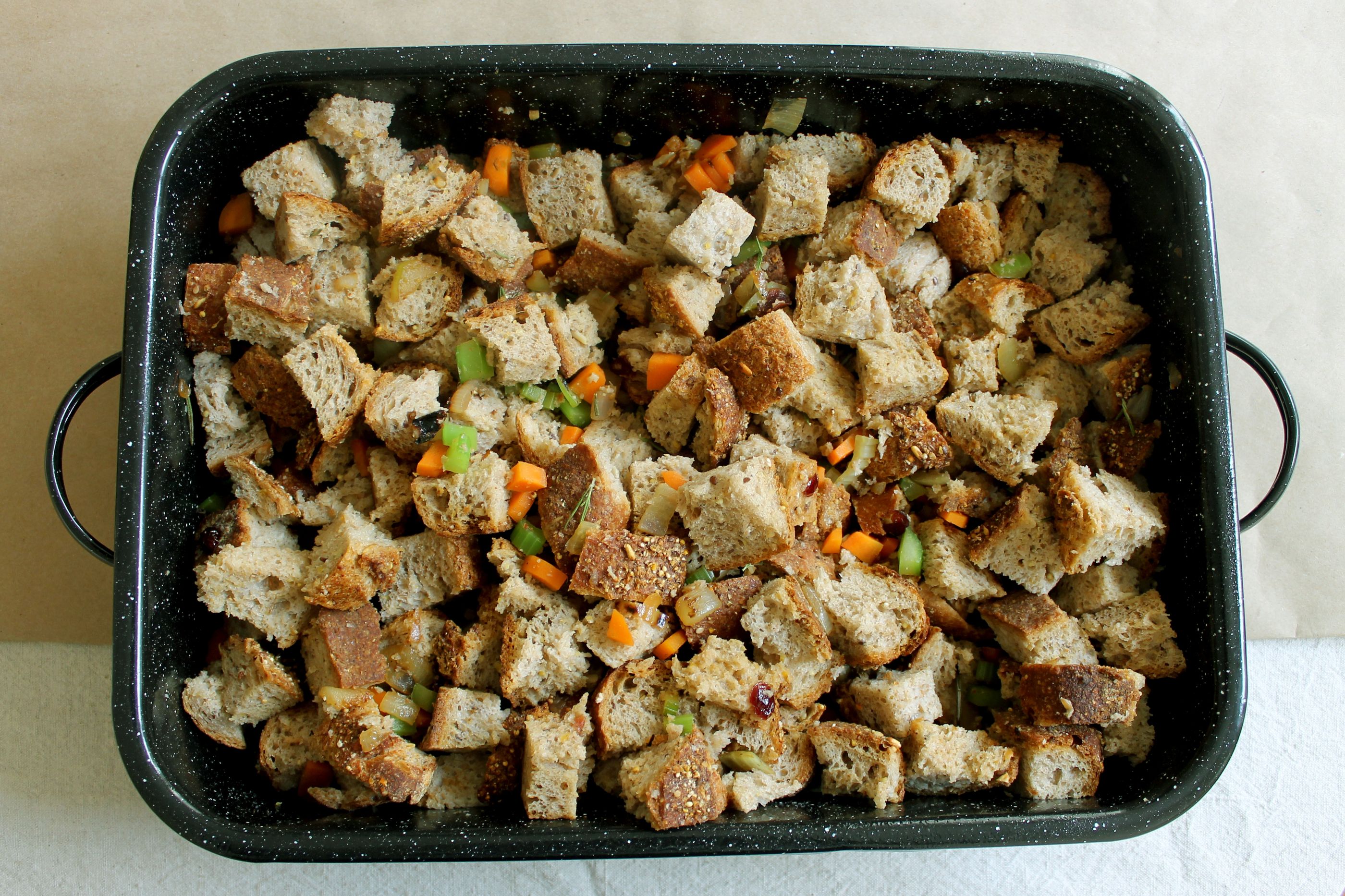 Next, I got to work on the Brussels sprouts. We combined the technique from the "Pot-Stuck" Brussels Sprouts with the honey and sriracha sauce from this recipe.

As Anna showered and got ready, I finished up the Roasted Cauliflower with Gremolata Bread Crumbs. Then it was my turn to shower and slip into my party dress. 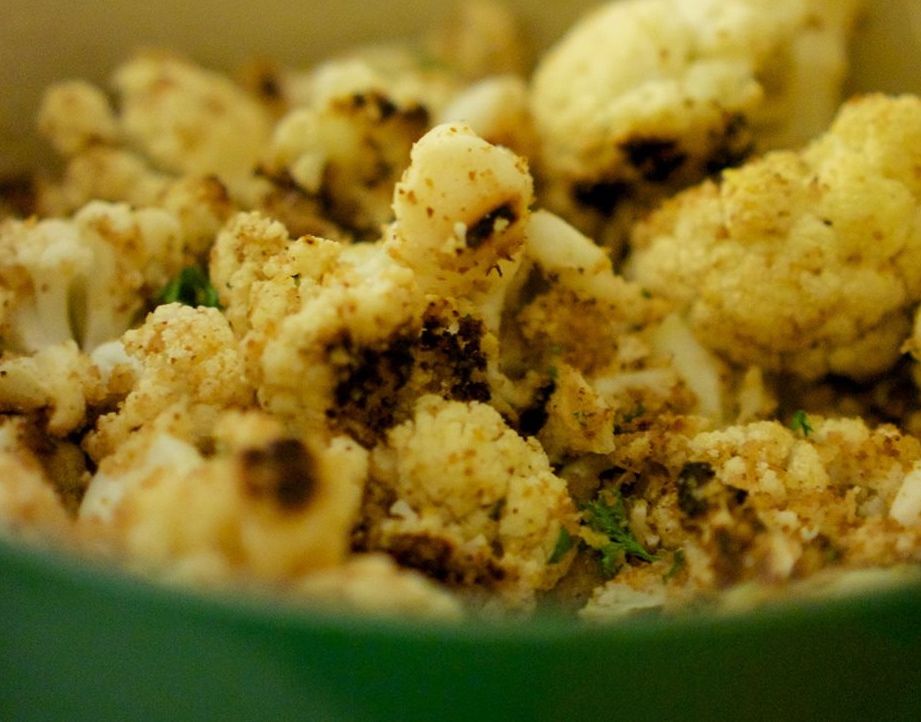 While I was out of the kitchen, she cooked the Caramelized Butternut Squash Wedges with a Sage Hazelnut Pesto and started prepping the chickens. 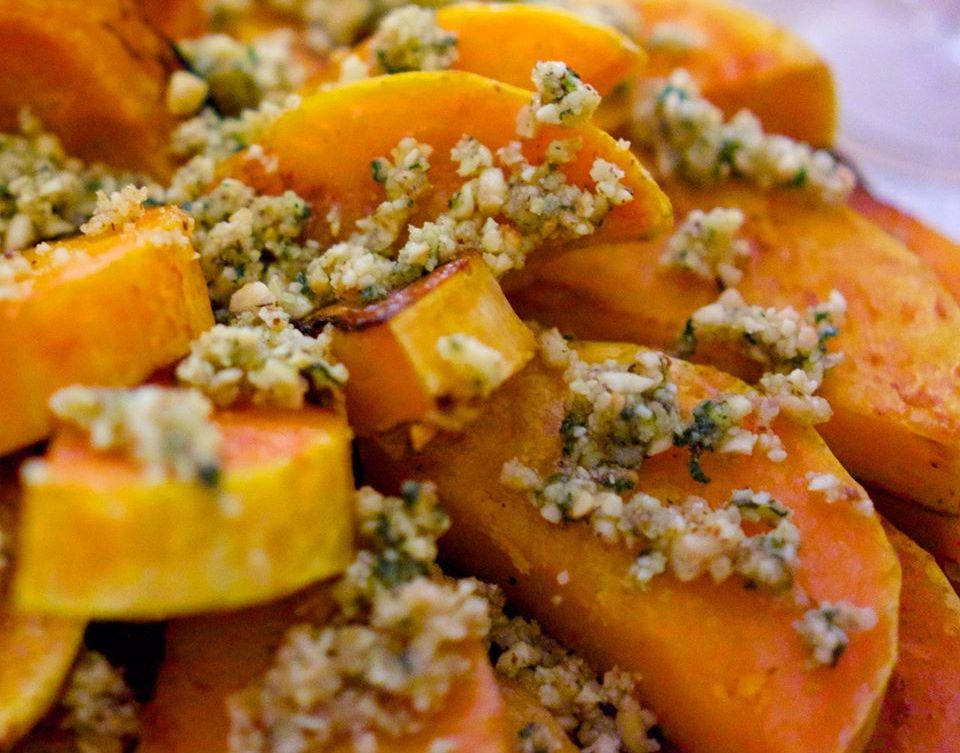 The chickens roasted nicely, as Anna whipped up the accompanying garlic and herb pan sauce. 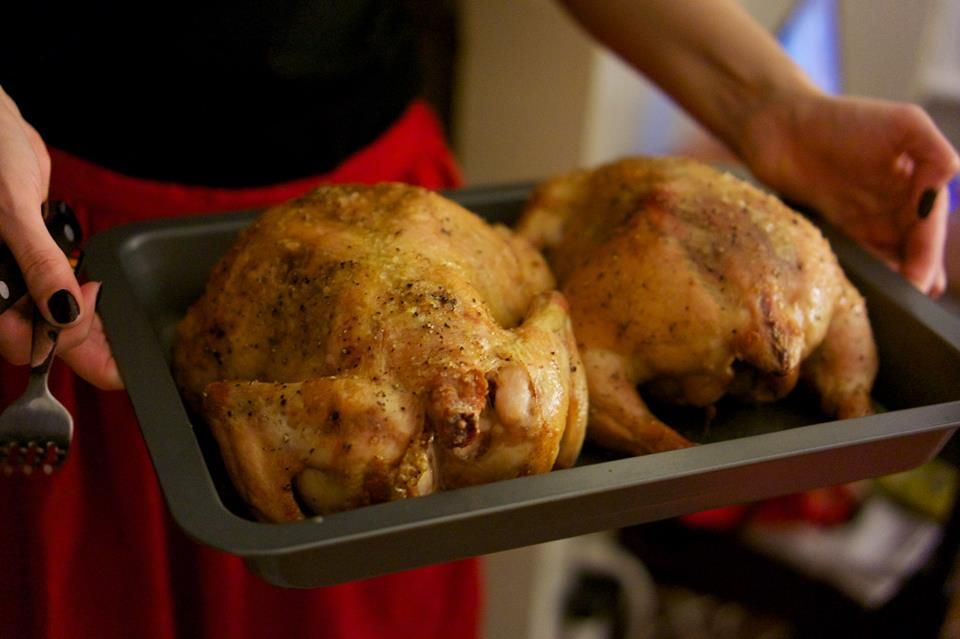 Right before the guests arrived, I mixed up a bowl of Apple Rye Punch. I figured that was the safest contingency plan: Even if the food turned out terribly, at least everyone would be fairly blitzed.

But there was no need. 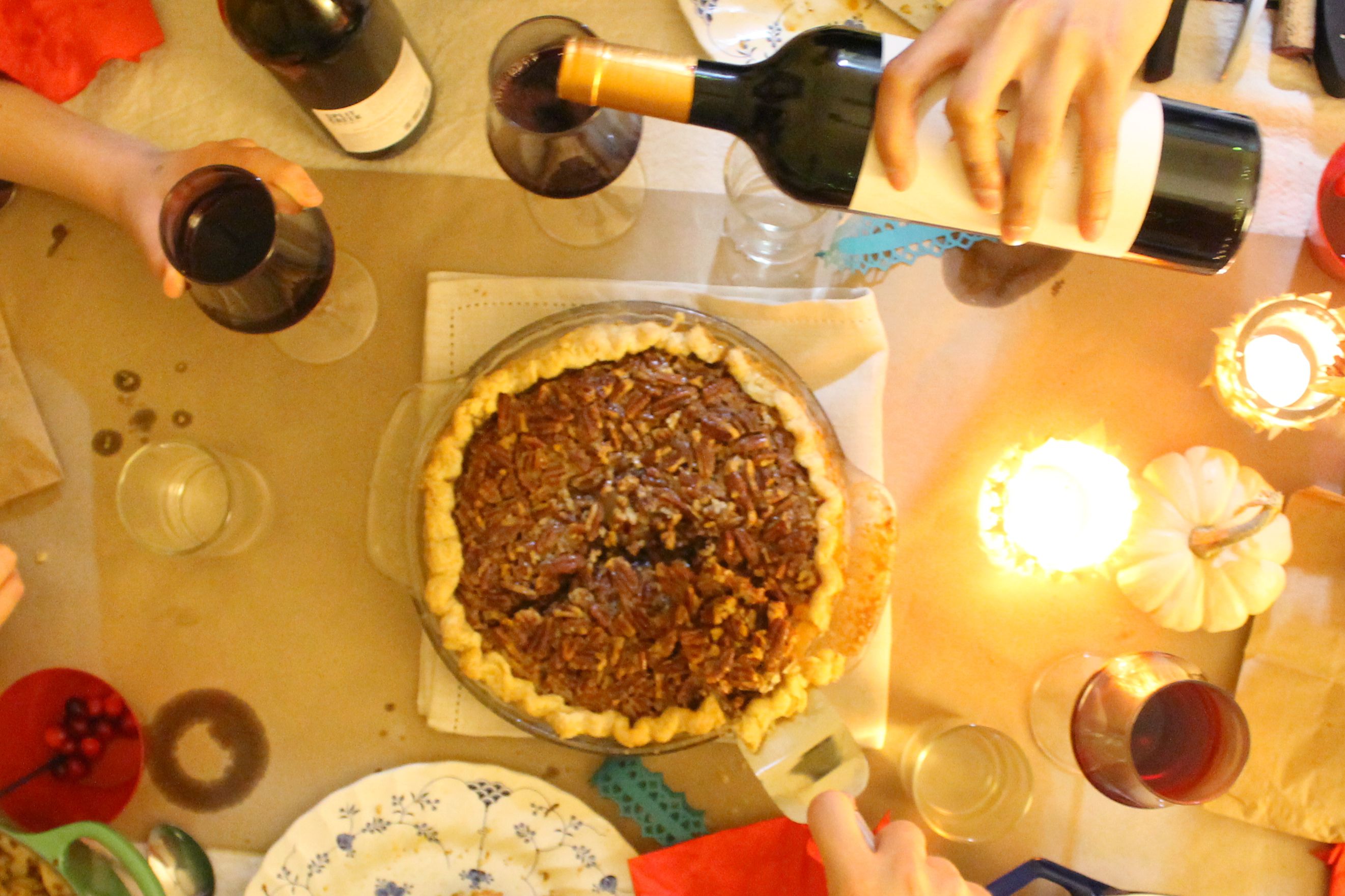 Kate N. November 8, 2013
Does this mean my food processor is broken?
Author Comment