Welcome to Blooper Week, where we'll be polling various cooks and food writers -- as well as the Food52 staff -- about their biggest Thanksgiving bloopers and their essential tips to avoid future disasters.

Today: Bon Appétit's Restaurant and Drinks Editor, Andrew Knowlton, shows us the importance of gravy -- and how to make it perfect. 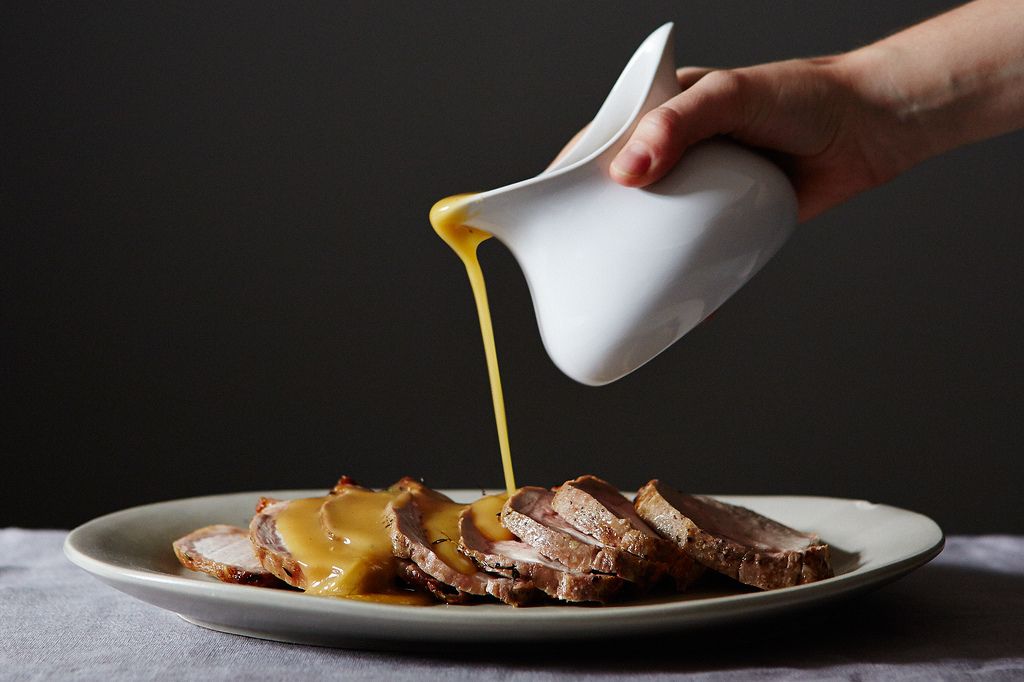 The most traumatic day of my life was the first Thanksgiving I spent away from home. I was 25 years old and full of questions: How would I survive? How would my parents survive? Would there still be football on TV? What made things even worse -- a lot worse -- was that I was also doing the cooking. True, it was just for my soon-to-be-wife and me, but there were deeply emotional issues at stake here. Would I screw up my mom’s cornbread dressing? Did I have to make my grandma’s mint-green marshmallow casserole thingy? (Yes, yes I did.) And was roasting a turkey as terrifying as my family made it out to be? With so many challenges, I decided to focus my attention on the single most important dish on any Thanksgiving table: the gravy. A good gravy can save the driest turkey, the most uninspired mashed potatoes -- even stuffing from a bag. It’s the glue that holds the Thanksgiving meal together (sadly, some folks take that literally). It’s the savory river that lets you float from meat to starch to vegetables and back again (and again).

As long as there’s deep, rich, hot gravy on the table, everything will be okay. 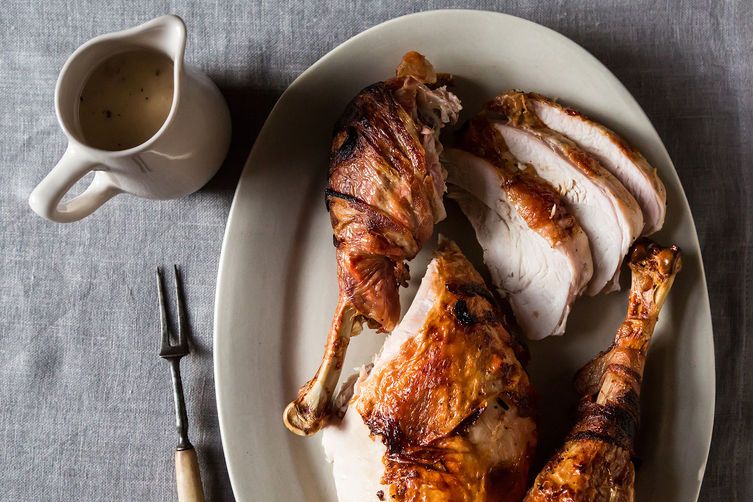 That doesn’t mean making it is easy. I called my mom and she talked me through her recipe. Instead of using a time-consuming roux, she said she simply mixed milk and flour together. Turkey drippings went in near the end, as did diced giblets. It was my mom’s gravy, what I grew up eating; I had to make it. So like a good son, I did. And...? Well, let’s just say she either mis-remembered her recipe or I wrote it down wrong. Either way, with an hour to go before mealtime, I was staring down at a pan full of thin “gravy” with a depth of flavor no deeper than the tears welling in my eyes. Everything on my new Ikea dining table -- the simple roast turkey, oyster cornbread stuffing, brown sugared apples, sweet potatoes with bruléed marshmallows -- was exactly as it had been my entire life. Everything except for the gravy. I frantically flipped through cookbooks and magazines, eventually landing on page 166 of the November 2003 issue of Bon Appétit. There it was: a recipe for apple cider gravy that also contained Calvados (which I love). Who cares that I didn’t have any Calvados -- I had Wild Turkey 101, which in my mind, was even better. An hour later, my Plan B gravy was finished and, damn, if it wasn’t great.

Since then, that gravy has become an essential part of my family’s Thanksgiving feast -- the one I prepare every year for my wife, our kids, and whoever decides to stop by that day. I still make my mom’s dressing and, if I’m feeling nostalgic, Grandma Knowlton’s green marshmallow monster (something that no kid in their right mind would ever touch). But after cooking my own meal for 10 years, I’ve learned that the best part of any Thanksgiving is starting your own traditions. And for me, that all starts with the gravy. 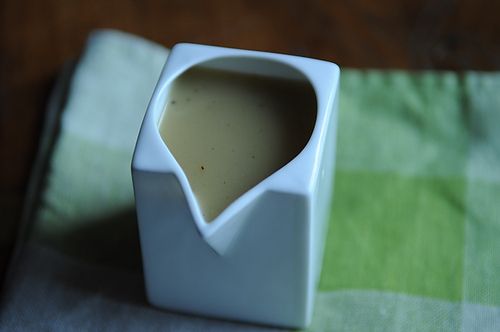 Here are my tips for better gravy this year:

Make stock beforehand. This is the most important thing of all. People probably get tired of hearing it -- but if you're going to make stock once a year, take the time now. You can usually buy wings for cheap -- and then you can make a stock to have around for everything (your stuffing, your mash). On Thanksgiving, I always have a stock pot -- with a big ladle in it -- on my stove.

You need a roux. When people hear the word "roux," they start to shudder -- because they tried to make gumbo once in their lives. With gravy, though, getting that amber color isn't as important. It's worth the time to make a flour-based roux, as it gets you on the path to getting a perfect texture. Silky smooth gravy depends on that roux. I use butter and flour, and I always make just a little bit more in case I run into any issues, or in case I need more gravy. 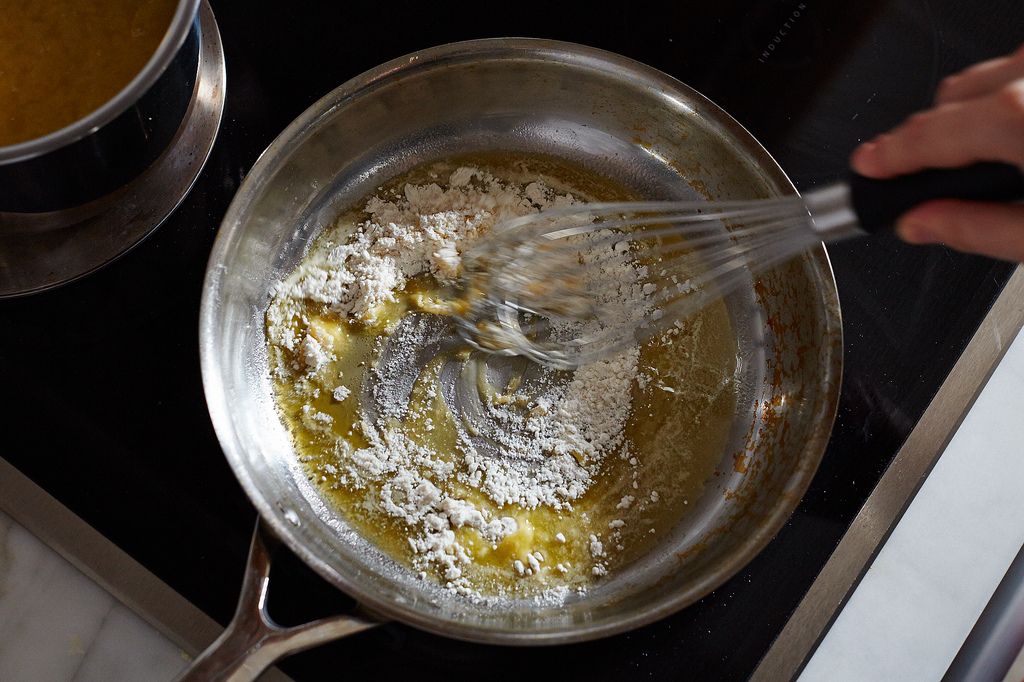 Add booze to your gravy. I've been using the Apple Cider Gravy recipe since 2003, which calls for Calvados -- and a few years ago, I started throwing in bourbon. There's always booze in my gravy somehow; that's become a tradition for me.

Pay attention to the consistency. You know it when you get it right; it's somewhere between a thick yogurt drink and a bolognese. You want to let the stock reduce quite a bit; I reduce mine by over half. Don't season until the very end -- and then be sure to strain it. If it's too thick, add stock tablespoon by tablespoon. If it's too thin, keep boiling it down

Get that gravy hot. The gravy needs to be piping hot when it hits the table. To ensure this, pour hot water into the gravy boat before you put gravy in to keep it warmer longer; like they do with coffee cups in espresso bars.

What are your tips for perfect gravy? Let us know in the comments -- and make sure to check out Bon Appétit's free Thanksgiving app!

bonappetit.com
Andrew Knowlton is the Restaurant and Drinks Editor at Bon Appétit magazine, where he writes features and monthly columns for both the magazine and the website. His blog, The BA Foodist, was nominated for a 2009 James Beard Award. He has appeared as a judge on The Food Network’s "The Next Iron Chef America" and "Iron Chef America." as well as on NBC’s “Chopping Block.” Andrew appears regularly on CBS, Fox, The Dr. Oz Show, and The Today Show.

Valerie A. October 29, 2015
Use your microwave. The same result as roux but easier. Put butter in pudding basin, melt in microwave. Add flour (any wheat flour) in the same quantities as you would for roux. and mix both together. Cook for seconds. Then add small amount of COLD water. Mix to make a smooth rich cream. No time at all. Add HOT stock and sieved juices from roasting pan. Keep stirring the lovely smooth gravy and transfer all into a saucepan to boil before pouring into gravy boat. Heigh presto. Easy.

beejay45 October 22, 2015
Lots of good advice. Thanks. I usually thicken my gravy with milk and cornstarch because I seldom like sauces thickened with flour. Just something about them. But! I do love my Bechamel*, which nothing can replace, in so many dishes.

* Or "chameleon" as spellcheck would have it. ;)