Today: Alexandra Stafford of Alexandra's Kitchen knows it takes a pinch of this and a pinch of that to make a delicious chicken dish. 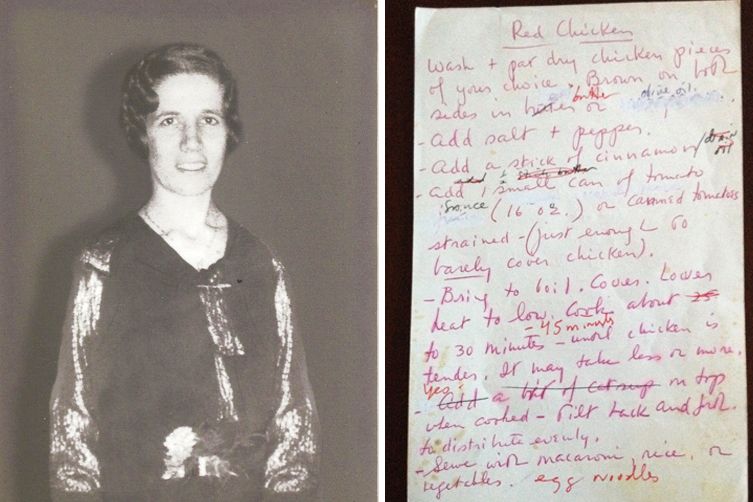 My great-grandmother transcribed recipes in the only language she knew: mix half a wine glass of "X" with a handful of "Y," then add "Z" till it's the right consistency. Like many women of her generation, she learned to cook from her mother. When she moved away from home in Pyrgos, Greece to Worcester, Massachusetts, she continued cooking as she first learned: by feel, taste, and what she had on hand. 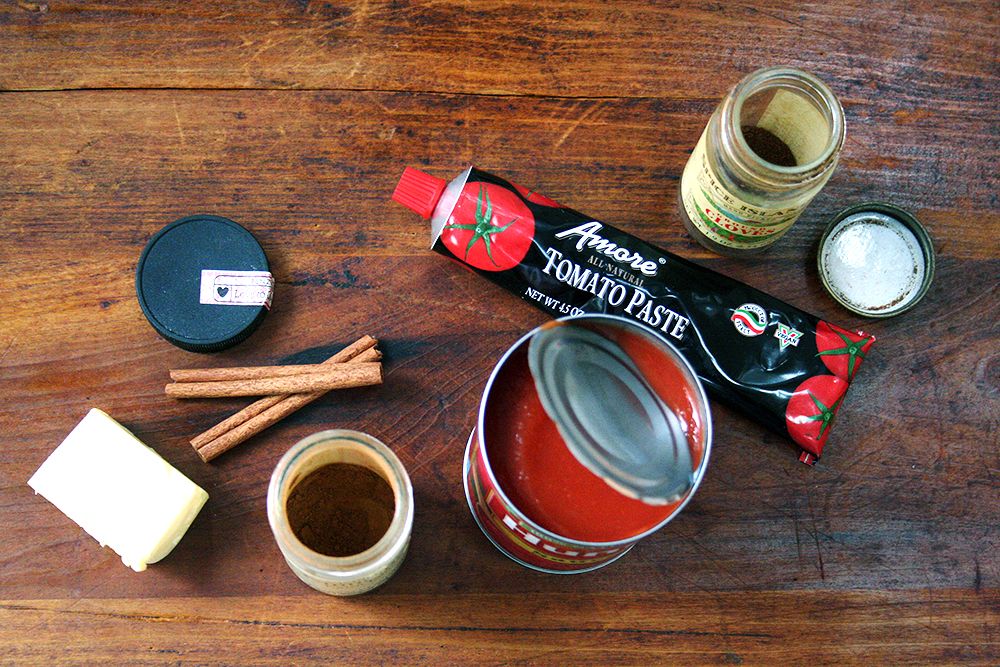 I don't remember my Great Gramma Worcester, but my mother and aunt adored her —- they recall her feeding strangers that appeared at her backdoor. They also adored her cooking —- favorite recipes include rice pudding, pasticcio, and egg and lemon soup. Over the years, they have worked hard rewriting her recipes in a language more familiar to the cookbook-collecting, iPad-dependent generations. 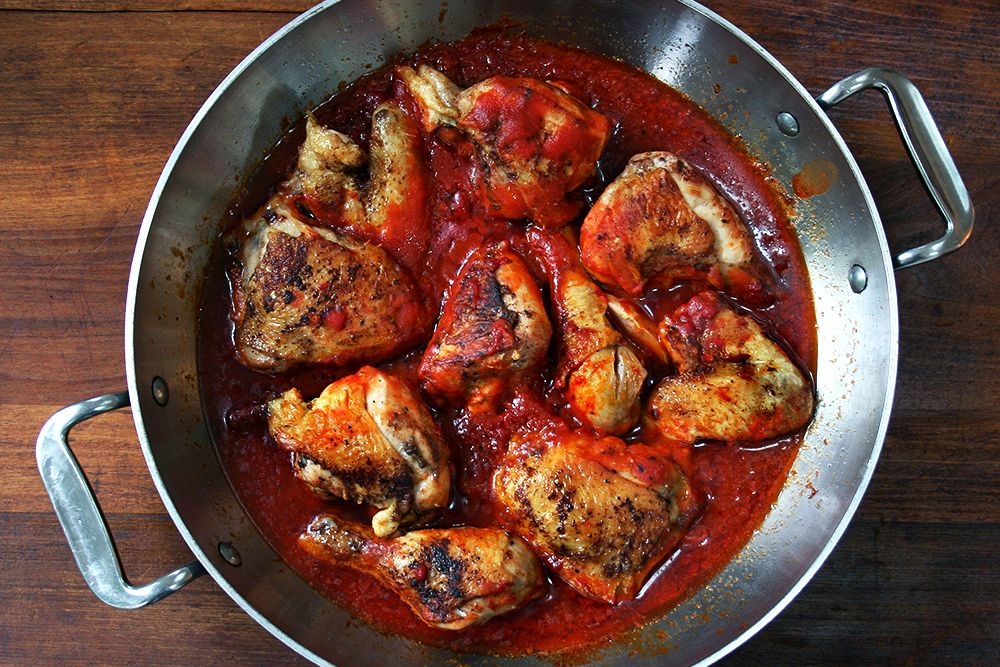 I, of course, couldn't be more grateful. I grew up eating chicken kapama, also known as "red" chicken, but it wasn't until recently, when I found myself with a couple of fickle children sitting around my dinner table every evening, that I started making this childhood favorite for my family. Browned with butter and cinnamon sticks, then braised on the stovetop with tomato sauce, chicken kapama never tastes more delicious than at this time of year. I serve it as my mother always did, with buttered egg noodles tossed with the cinnamon-scented tomato sauce and finely grated parmesan. Everyone, children and adults alike, adores red chicken with egg noodles. 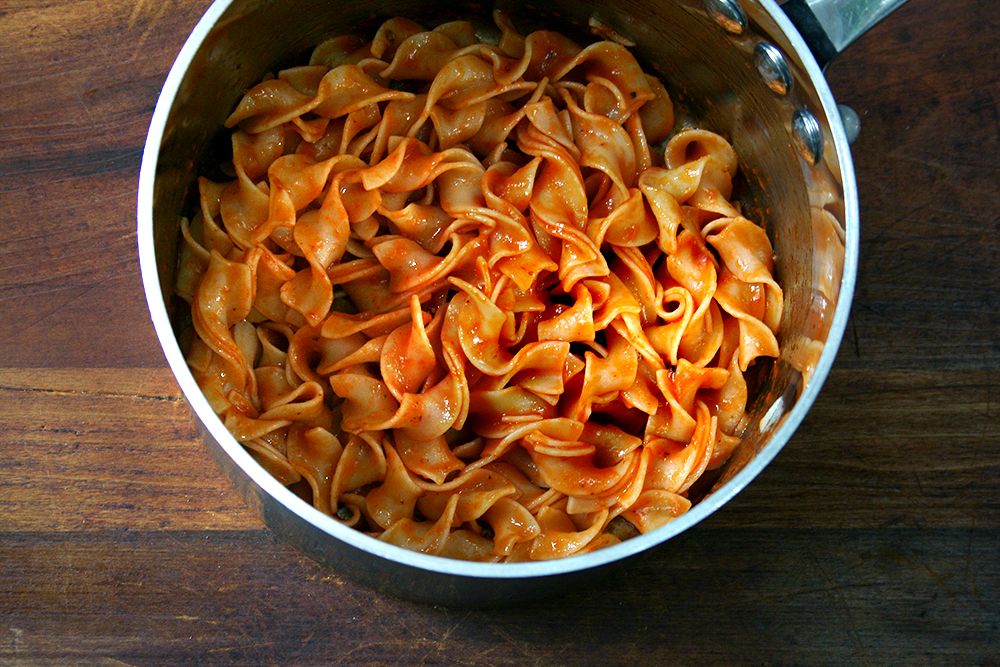 There are countless variations of chicken kapama, but my great-grandmother kept it simple, rarely using more than butter, cinnamon sticks, and tomato sauce. As noted by my mother and aunt, she consistently she cooked the chicken at a leisurely pace, browning the chicken in the morning, braising it in the afternoon, turning the stovetop burner on and off throughout the day, with the whole process often taking hours. She also wasn't afraid to use butter and a squirt of ketchup (surprising, I know) for sweetness.

Now that I've made the kapama a few times, I have noticed that it never turns out better than when I take my time with both the browning and the braising and leave the finished chicken to rest hours before serving, allowing the flavors to meld, the acidity of the tomato sauce to mellow, and the cinnamon flavor to heighten. But without fail, I have to fiddle with the sauce in the end -- sometimes with butter, sometimes with ketchup, sometimes even with water. I can't tell you exactly how much -— a pad? a drizzle? a spoonful? -— but that's just how Gramma Worcester would like it. 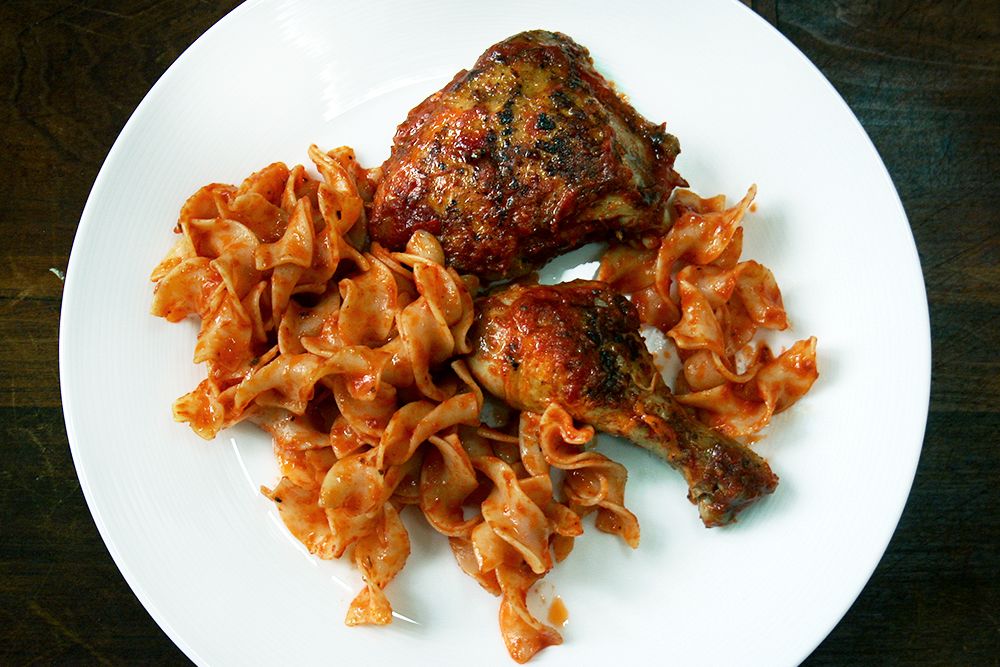 Maria N. December 20, 2015
Made this tonight and it was delicious. My family is Greek but I've never had chicken kapama. Oh and I think you mean pastitsio; pasticcio is Italian- there's no "ch" sound in Greek. :-)
Author Comment

Alexandra S. December 20, 2015
Yes, you are absolutely right — pastitsio! So happy you liked this. It's one of my family's favorites :)

J D. December 3, 2013
Always interesting to see how these dishes translated from a Greek kitchen to a 20th century kitchen in the U.S. We have many versions of red sauce/kokinisto/krasato/kapamas type braised chicken dishes in Greece. Rooster braised in a red sauce is a specialty of the larger region that Alexandra's great grandmother comes from. Literally cooks for hours w/ any combo of red wine, tomato, tomato paste, fresh chopped tomato,and with or without the spices as in this recipe here - the only way to soften a tough old rooster is a LONG, slow braise stove top or oven.... and it is DELISH! Gonna give this one a try. Thanks Alexandra. (ps - kapama or kapamas comes from the Greek word "kapaki" which is the name for the lid of a pot) Alexandra - any other old country recipes you have from your great grandmother?
Author Comment

Alexandra S. December 3, 2013
So interesting! Thank you for sharing the origin of the word kapama. I meant to ask my aunt, who still knows a bit of Greek, that question. It really is true how the long slow braise makes a difference in this particular recipe. And yes, I have quite a few old recipes from my great grandmother, but I'm not sure I have them all transcribed. When I was talking to my mother and aunt they mentioned stuffed tomatoes, yiaprakia (you probably know this, but it's stuffed cabbage with egg and lemon sauce), chestnut stuffing, egg and lemon soup, diples, yogurt cake, dolmades macedonia, and lamb fricasee. If you want any of these recipes, I can ask my mother and aunt. Thanks for your comment!

J D. December 3, 2013
Thanks, Alexandra, I'll email you via your site, but curious about several of the ones you've got listed. I am assuming she was from the Peloponnese? (Pyrgos), so yiaprakia (lahanodolmades) is the northern Greek word for stuffed cabbage leaves and I'm curious to see what makes the dolmades macedonia, well, Macedonian (again, northern Greece). I'll send you a link to an interesting vid of a friend, second generation Greek American, making spanikopita w/ Martha Stewart. He apologizes to Martha for using butter instead of olive oil as his "yiayia" (grandma) taught him, but in actuality, depending on the region his yiayia came from, it was probably completely accurate to use butter. Thanks!
Author Comment

Alexandra S. December 5, 2013
Oh, so funny! I would love to see that video. I am curious as to how your friend makes spanakopita compared to how I learned — my mother always taught me to spoon the butter (versus brush) over the layers of phyllo, which (apparently) creates lighter layers. So glad to hear that using butter is accurate, too, because that's what my family always uses.

Ok, so yes, Gramma Worcester was from the Peloponnese, and it is interesting that some of the dishes she is known for are from northern Greece. I'll have to ask my mom. It might be because the other great grandmother (my grandfather's mother), Gramma Manchester because she lived in Manchester, NH, was from Macedonia, and it's possible that over the years they shared recipes. But I don't know? I'll look into it :)

J D. December 6, 2013
Here's the link to the vid below. Oh, you can't even begin to imagine the plethora of different versions of spanakopita in Greece depending on region, and of course each individual cook, with or without egg, cheese, or a mix of cheeses, with or without a mix of herbs, green onion, red onion, etc. Sometimes rice or bulgur or a type of dried gruel called trahana added in to add either flavor or keep the filo dry. So many. Most people outside of Greece don't know that we have a HUGE amount of Greek cookery that's nothing but pites (filo pies). So many different types of recipes for filo (handmade of course)as well. So many, many different types of wonderful savory pites. You can't imagine. One could write volumes on the topic. Unfortunately, since the arrival of ready made filo, freezer section frozen pies and both parents leaving home for work, fewer women are learning how to "open" a filo from their mothers or grandmothers, and many old amazing regional pita recipes are being lost as the older generation passes on. I've been meaning to post my recipe for kotopita (chicken and cheese pie with filo). It's a variant of a friend's mother's that's quite easy to make and absolutely delish, and will work fine with store bought filo. She's from Lesvos (island in eastern Aegean) but this particular kotopita recipe that she uses weekly has its origins from northern Greece, so there ya go!
http://www.marthastewart.com/994622/greek-spanakopita-spinach-pie?search_key=spanakopita
Author Comment

Alexandra S. December 8, 2013
Just watched the video — so interesting! I never knew there were so many variations on making spanakopita. I never would knew rice or any grain could be used in the filling, let alone soy sauce :) I loved that! And I loved your friend's yiayia in the audience. Too cute. My family uses eggs, feta, cottage cheese (probably what my great yiayia's used in place of soft myzithra), and raw spinach. I have a recipe (not that you need one!) but in case you are curious: http://www.alexandracooks.com/2012/03/23/spanakopita-strudels/ (you have to scroll down to get to the traditional pita — I made strudels for fun)

My mother remembers her grandmother making her own filo and hanging the sheets on the clothes drying rack. I would have loved to see that!

I would absolutely love your recipe for kotopita. Please let me know when you post it. It sounds absolutely divine.

lapadia December 2, 2013
A lovely recipe and history that goes with it. Cheers to your Great Gramma!
Author Comment