In anticipation of this year's Piglet, we'll be sharing articles, recipes, and tips from past winners. Following Good to the Grain is The Art of Living According to Joe Beef. Learn more about this year's tournament here, or head to Provisions to add some of the titles to your bookshelf!

Today: Frédéric Morin, David McMillan, and Meredith Erickson share Joe Beef's first recipe of the week, with an ingredient that might surprise you. 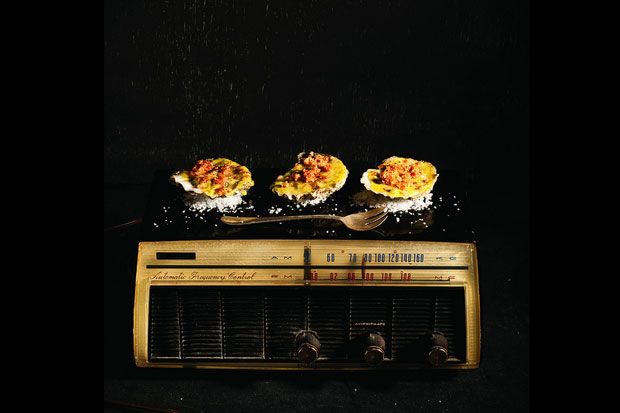 When we started Joe Beef, the town was suffering from a weird vibe, a kind of up-the-ante feeling with regard to food: People went out to eat like college kids drink beer. If someone was doing testicles, you could count on someone else to pair them with pizza. Feet were kept on chickens, and heads and eyeballs were served as sides. There was no end in sight, much less vegetables.

The oysters themselves are simple: plump specimens topped with crisp bacon, chives, potatoes, eggs, cream, and some bread crumbs. Serve yours on any inedible ingredient of choice.

Hot Oysters on the Radio

Photo by Jennifer May

foxeslovelemons January 27, 2014
I picked up "The Art of Living According to Joe Beef" when I dined at Joe Beef a few years ago. The "Lentils Like Baked Beans" recipe is probably the most delicious thing I have ever made.

Kenzi W. January 27, 2014
I want to start a band and have our first album be called Hot Oysters on the Radio.

Catherine L. January 27, 2014
On a separate note, I'm thankful that I have not seen testicle pizza in New York. Yet.