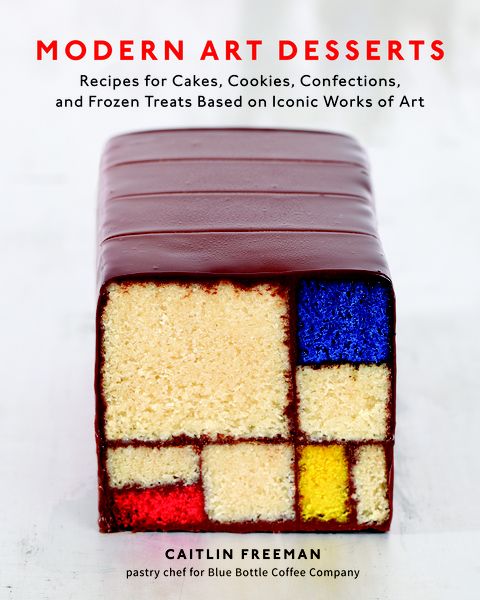 From the moment I heard about Caitlin Freeman’s famous Mondrian cake, I wanted to go to San Francisco's Museum of Modern Art just to try it (well, and to see the art, too). And when Freeman released her book on how to make some of those same cakes at home, I sprung for the chance to recreate her masterpiece myself.

Sifting through Modern Art Desserts is a little bit like visiting a museum in its own way. Each of the pieces from the Blue Bottle Café at SFMOMA's Rooftop Garden are presented in the book not only with the recipe, but also with the backstory of how Freeman and her crew came up with the idea, a glimpse at the original work, and a few brief paragraphs about the artist.

More: We spoke to Caitlin not long ago. Read what she has to say about her book, and get the recipe for her Mexican Wedding Cookies.

With the idea of the Mondrian cake looming over my head, I decided to start off with something a little less challenging. As a fan of pop art, I loved the idea of the Lichtenstein cake: a four-layer red velvet cake with cream cheese frosting, covered in the red dots iconic of Roy Lichtenstein’s comic book style. While the layering tested my cake-cutting abilities (which proved less than wonderful but decent enough to not sway me from the challenge of the Mondrian cake), the cake was just as delicious as it was striking.

As a second recipe, I decided to take it easy and venture away from cakes by testing the Kahlo Wedding Cookies, which are based on Frida Kahlo’s wedding self-portrait "Frida and Diego Rivera." The cookies came together quickly and easily and they tasted sublime. My only wish was that I could find nocino, or walnut liqueur, but Freeman anticipated that many readers would have the same difficulty and recommends simply using vanilla extract in its place. Even without the liqueur, the walnut flavor came through, and the cookies were finished with a surprising -- and pleasing -- hit of Maldon salt.

The time came to tackle the big project: the Mondrian cake. The cakes baked up easily, the ganache poured on smoothly, and my nerve-ridden, unsteady hand cut each piece as best as it could. In the end, there was a miniature masterpiece in my kitchen. As I built it, I appreciated that the book was written simply and clearly; the fact that it was utterly entertaining was an added bonus.

It goes without saying that this book is an undertaking. But I dove in prepared to have many more complications than I did, and I ultimately have only one sore spot, which is the amount of specialty equipment needed. Freeman happily lists what she uses and where she gets each piece, and she does alter her recipes for the home cook (except for the Mondrian cake), yet I ended up spending more on cookware than I bargained for. Though now that I have it all, I'll be cracking open Freeman’s book again and again.

snowcitygirl February 13, 2014
Thank you so much, AntoniaJames! Glad you liked it! :)

dymnyno February 13, 2014
I love this cookbook. I am a member of the Modern Art Council in SF so I make it in to the SFMOMA at least once a month for meetings. The rooftop sculpture garden is fantastic, especially in good weather when you can sit outside and the cafe which anchors it all is memorable for its' desserts and Blue Bottle Coffee. (We are anticipating the opening of the huge expansion sometime in 2016 at which time it will include the Fisher Collection.)

Greenstuff February 13, 2014
Sweet! Don't anyone rush out to San Francisco, as SFMOMA is closed for major expansion. Great to know that we can make those treats for the eye and the stomach on our own.

AntoniaJames February 13, 2014
Chris, thanks for the tip! I would never make the Mondrian cake, but am planning a trip into town this weekend anyway and was about to put on our list treating ourselves to coffee/tea on the SFMOMA rooftop, with a slice of that cake! Do you know if the Mondrian cake is available anywhere else in the Bay Area? Again, thank you. ;o)

Greenstuff February 15, 2014
Closer to you than you may have guessed, AJ! Blue Bottle's new spot on Broadway in Oakland is offering Mondrian cakes, and you can order them on line at http://www.modernartdesserts.com/about

aargersi February 13, 2014
Great review! Is the Mondrian cake the one on the cover? And what-all equipment did you have to buy?
Author Comment

snowcitygirl February 13, 2014
Thank you Abbie!
The Mondrian cake is indeed the one on the cover, and for that cake specifically I had to purchase a 16-inch long Pullman Loaf pan. And because I tend to lean towards the side of perfectionism I also purchased a dot stencil, which I can't recall the name of but Freeman lists in the back of the book, for the top of the Lichtenstein Cake.

I would have spent money on the walnut liqueur, or nocino, too, but unfortunately we're a bit behind the bandwagon up here in Alaska - although apparently a LOT of people have been wanting to get some up here!