Today: Niccie King finds the recipes from Le Pigeon as lovable as the team behind it. 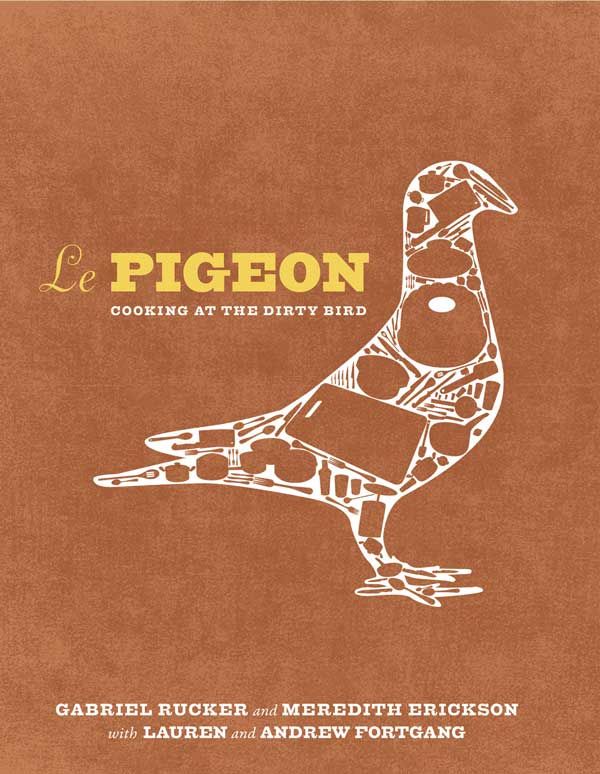 Since I live only a couple of hours from Portland, I had a soft spot for the Le Pigeon cookbook before I'd even opened it. On an emotional level, it didn't disappoint -- even those who aren't from the Pacific Northwest couldn't fail to be fascinated by the journey Chef Gabriel Rucker and the Le Pigeon team have taken with their restaurant. From "finding a really shitty house" in Portland on a weekend visit and moving to the city the following week, to reinventing a run-down restaurant in a neighborhood better known for its prostitutes and pushers than for fine dining, they've had quite the trip.

Rucker's introduction is engaging and down-to-earth; he shares how he recruited manager Andrew Fortgang through Craigslist, and how he started serving offal not because it was hip, but because it was cheap enough to allow the restaurant to turn a profit and pay the bills. By the time you get to the recipes, you're half in love with the team behind this restaurant.

They may have begun serving offal because of its cost, but these guys know their way around the less popular parts of our farmyard friends. An entire chapter is devoted to tongue (Lamb Tongue Fries with Rosemary Ketchup, anyone?), and another, entitled "Horns and Antlers," encompasses recipes for tripe, calf's head, heart, sweetbreads, and bone marrow.

This book also has its fair share of crowd-pleasing recipes, featuring a lot of local fish and a substantial dessert chapter, along with sections devoted to more typical cuts of meat, like the excellent "Jacked Pork Chops." The dishes vary in complexity from a 5-ingredient, 5-minute dish of clams with Kielbasa sausage cooked in beer (which made for a lazy Sunday night supper), to the Thomas Keller-esque "Foie Gras Bacon Brioche." The latter is made over the course of 2 days and requires that you prepare 6 separate components (including 48-hour salt-cured egg yolks) before you can plate your dish.

This, though, is why Le Pigeon will have food enthusiasts reaching for it again and again. For those days when you want a technical challenge, the Foie Gras Ice Cream calls. On the days when you're craving comfort food, who could resist the lure of a bone marrow and caramelized onion sandwich? (It was certainly a revelation in my house.) The diversity of recipes, coupled with excellent sections on wine and cheese, will keep you coming back for more.

Ultimately, this book is for the cooks who like to plan ahead, who are on first-name terms with their butchers and are happy to go further afield than the local supermarket in search of the right ingredients. If that's not your style, you'll only make about 20% of the recipes in this endearing book, and that will be a shame -- you might never know the joy of their Parisian Gnocchi with Escargot and Bone Marrow. It really is a joy!

edamame2003 March 4, 2014
i was hesitant about the book because I thought the recipes would be too involved, but glad to hear there are straight forward exciting to make tonight dishes. thank you for the great review!

aargersi February 24, 2014
Love this book - great review and I agree completely! I have been making the cheese from the jacked chops weekly. Have you tried any rabbit ones yet? Now I am going to shirk work and run off to play with my cookbook.

JadeTree February 24, 2014
Great review! What fun to have a book that can offer a quick, delicious dish AND a Big Project. I need to look into this!