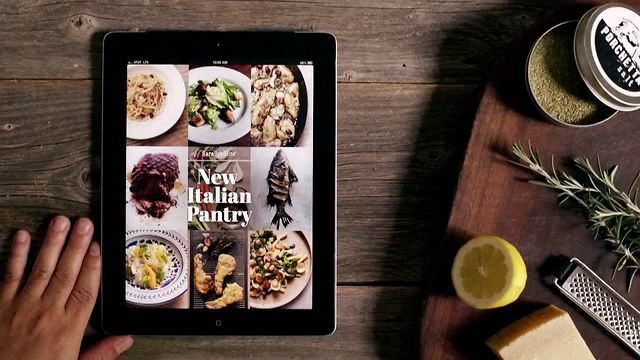 I loved the idea of Sara Jenkins' New Italian Pantry: an app (only available on iPad) in which you identify a few "pantry" ingredients you have on hand that then lead to ideas for spontaneous weeknight dinners? Sign me up!

Short videos first introduced each "pantry" item. Before I saw a single recipe, I was scolded that only homemade chicken stock would ever do; I was also encouraged to make or buy a specialty salt only available at the author’s restaurant. A few other recommended pantry items were even more unique. After I'd visited three different specialty food stores and still failed to procure Aleppo pepper, salt-cured capers, or fennel pollen, I became rather annoyed.

The layout of each recipe, though, is clean and inviting: A photograph of the finished dish is accompanied by a short list of the ingredients you will need, and the instructions follow. But once you click through to the recipe itself, you may be surprised by additional recipes embedded within the ingredient list. A recipe for Pork Chops with White Beans and Cabbage looks to take less than an hour, until you discover that you must first make slow-cooked cannellini beans, a step that clocks in (including soaking time) at an additional ten hours. And, though several recipes specifically called for slow-cooked cannellinis, others -- such as Pasta with White Beans and Broccoli Rabe -- merely call for cooked cannellinis. Why the difference? Taking a little more time to put the author's "voice" within each recipe header may have made these differences seem more purposeful and consistent.

For all the specificity seemingly involved in building a true Italian pantry, detailed information was lacking in the recipes themselves, both in preparation and execution. That same recipe for pasta with white beans instructs the cook to "dissolve" anchovies with olive oil, garlic, and chiles -- but didn't specify over what heat you should be doing your dissolving. Details were abundant and confining in some places, and vague in others.

Each recipe delivered a fine meal, but nothing noteworthy or memorable. Ultimately, I felt the New Italian Pantry app's portability outweighed its usefulness. It felt as though the "book" was suffering an identity crisis: it was certainly not designed to make quick weeknight meals possible, but it also didn't expand my repertoire with a few timeless "keepers," nor did it take the time to teach me a technique that would help me improve as a home cook. A few tricks within the technology were clever, like the embedded timer that could be launched within each recipe step, but without great recipes and an enthusiastic guide, it just felt gimmicky. Unfortunately, this cookbook will not earn a permanent place on my bookshelf, digital or otherwise.

beejay45 March 13, 2014
Excellent review! Seeing that title, I was all set to love it. You saved me some cash and some regrets.
FYI, fennel pollen is available online, but it's incredibly expensive. I have the stuff growing in my yard, so I harvest my own. Aleppo pepper and the salt-cured capers are also available online, fairly easy to find, in fact. But really, to expect someone to use a salt made by the author, sold only in her restaurant. Inconsiderate and, really, immature, IMO.

Gayle J. March 3, 2014
Years ago I had the experience of a Tuscan cooking class with Sara Jenkins while in Italy. She was not prepared and the event was an embarrassment for our tour group. It does not surprise me that this effort falls short.

KellyinToronto February 28, 2014
Thanks for your honest review!

EmFraiche February 27, 2014
Great review! The Le Pigeon cookbook also calls for fennel pollen in many recipes, and I didn't have success finding it either.

JadeTree February 27, 2014
Great and useful review. I think you've nailed a big issue: the app format is more exciting than the info it might contain. I bet that it's gorgeous at every turn and the hyperlinks make it "seamless" to read - but I see how this can open up a multitude of practical issues when you actually approach cooking time. You have a great eye for details that dedicated home cooks will appreciate!