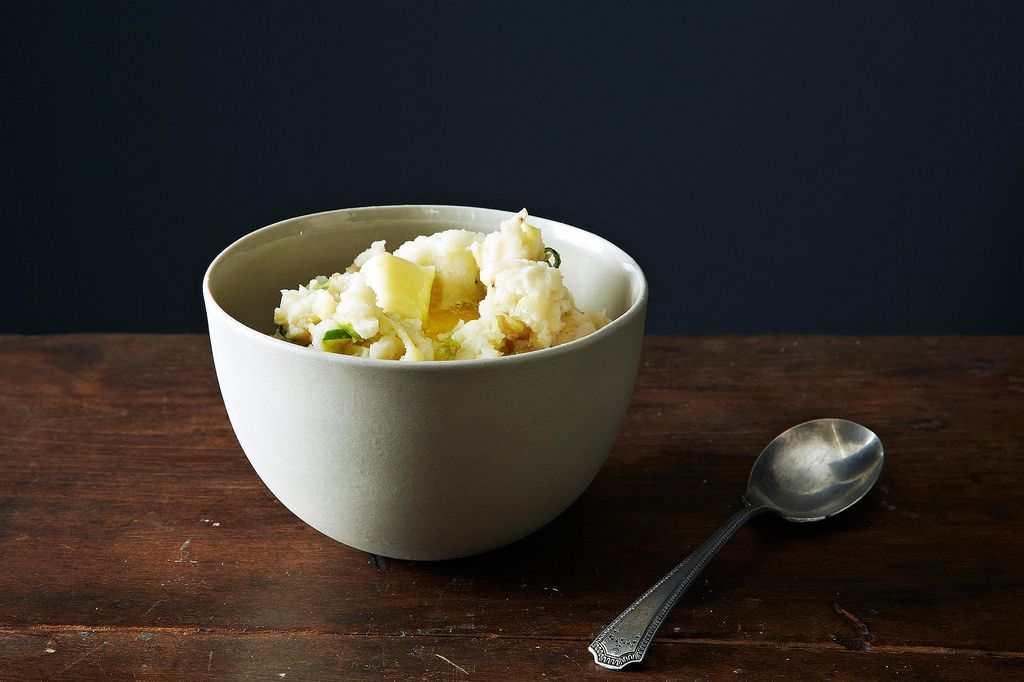 If there is a problem that typifies the luxuries of modern parenting, other than the problem of what diaper-containing device to purchase and whether you need to get those special bags for it, it is the problem of how not to raise a selfish, smug, entitled human.

On the other hand, a week of cooking with a single heat source and a single pot might instill all of us with some necessary humility. 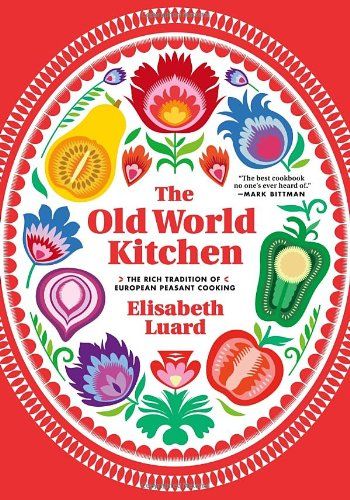 Is it obvious that I’ve been reading Elisabeth Luard’s The Old World Kitchen? First published a quarter-century ago, now brought back into print courtesy of Melville House, it is an expansive tour of European peasant cooking with recipes at once familiar (pizza) and unknown (oatmeal jelly) and wonderful sentences like: “Selecting your foie gras is much easier if it has already been removed from its original owner.” (Followed by instructions for selecting your foie gras if it is still attached.) Mark Bittman calls it, in the rare blurb that actually gets your attention, “the best cookbook no one’s heard of.”

It’s written in the wonderful style of Elizabeth David, in which you have the feeling of not so much reading the recipes as half-overhearing them. Why are there so few cookbooks like this anymore? Why are contemporary recipes so uptight? Why is there so much specificity in recipes these days that they read like they’re written by a lawyer who also dabbles in some cooking? 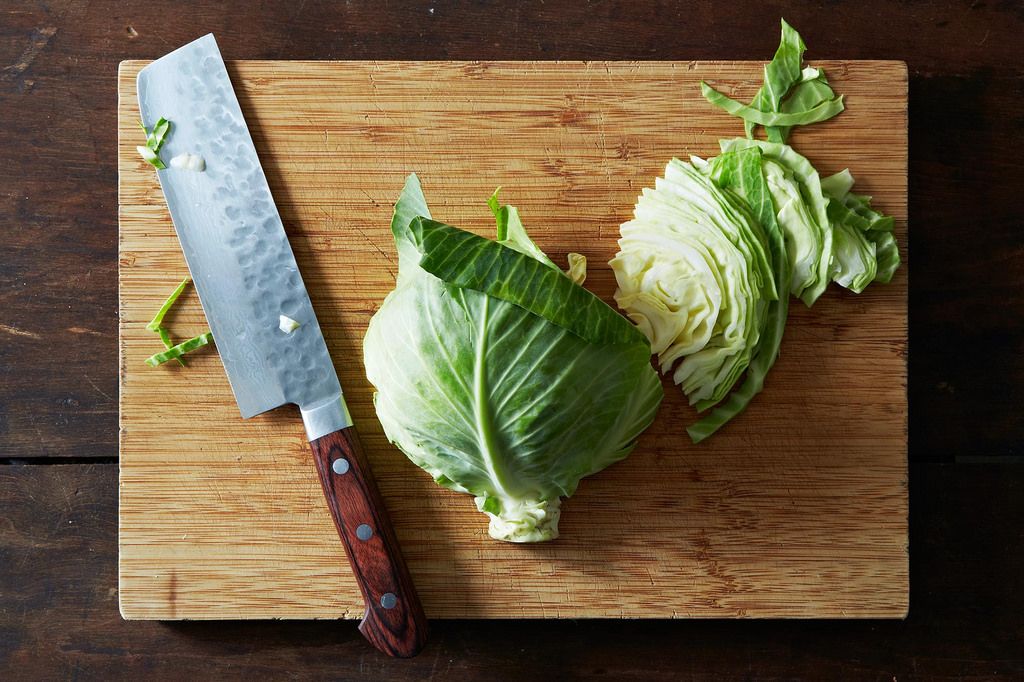 Maybe because in our world of instant feedback, if you don’t make a recipe foolproof, you soon hear about it in real time across multiple platforms. Maybe because we live in a time of infinite recipes, in which every recipe has to distinguish itself, in every subtle, painstaking particular, from every other recipe out there. Maybe because we have the naïve hope that if every variable is controlled, if every contingency is accounted for, then cooking is basically just assembling Legos.

But also this: because we must be able to improve on the past. We have modern kitchens; we have more than a single heat source; we have children privileged enough we worry about them being too privileged. These days we cannot resist reading a recipe, especially a traditional, clearly un-chef-ified recipe, without thinking, But wouldn’t that be better if? And a lot of recipes these days are written basically to instantiate someone’s version of what that better is.

And often it is better: we usually have more than one pot to work with, for starters.

This is why: I made Luard’s colcannon recipe -- the Irish dish of potatoes plus alliums plus greens -- and it was delicious. But then I looked up colcannon on Food52 and found the recipe below, by fiveandspice. (It’s a little hard to find, because Emily called it “How We Survived…” which is a very colcannon-ish recipe title. Penury! Perseverance! Insulation!) It’s a fairly traditional colcannon recipe, albeit an accidental one, except that she -- wait for it -- browns the cabbage. And she infuses the milk with garlic and peppercorns! In other words, she cannot resist the impulse to make the recipe better. She even admits this: “I definitely think sautéing the cabbage is preferable to boiling (although boiling would correspond more with a lot of the food of my childhood!)” 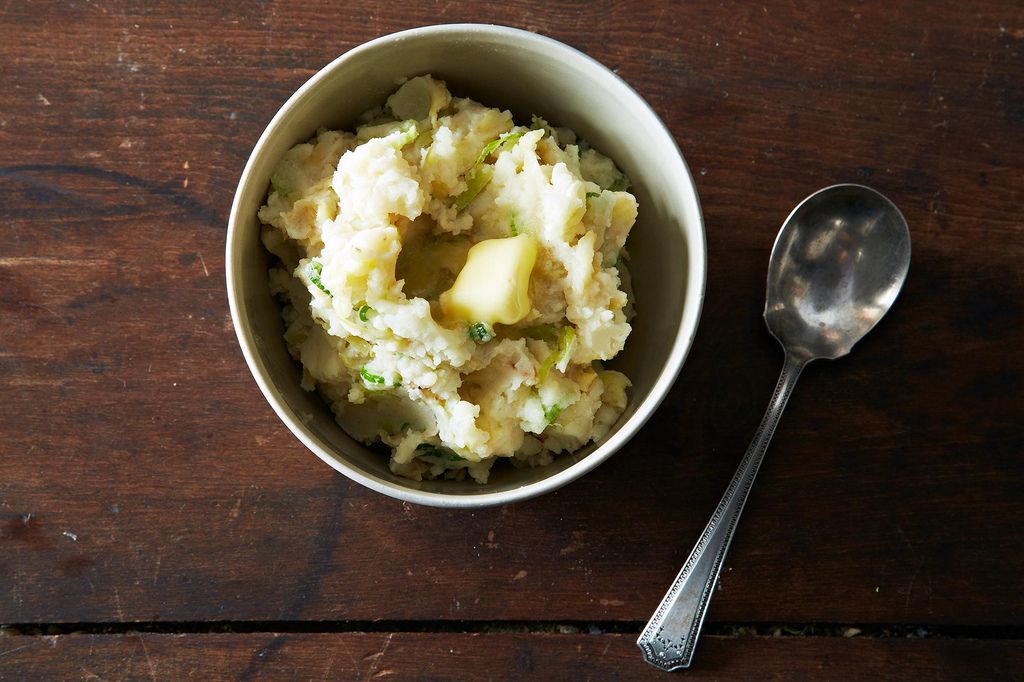 She’s not wrong. If you have the fuel, and the pots, and the time, I’d brown the cabbage too. It’s very good colcannon.

Luard says that colcannon was traditionally a Halloween dish and it used to come with a ritual: “Four favors would be hidden in the dish: a gold marriage ring, a piece of money, an old maid’s thimble, and a bachelor’s button. Those who got one in their portion had their fate decided for the coming year.”

This further tested my devotion to authenticity, since the children are only one and five. What can I say? We spoil them.

How We Survived ... (Colcannon)

Serves about 3 as a main dish

Mary J. January 5, 2015
In the 50s my mom put bacon in her colcannon. And she said you could only make it in the fall when the potatoes were freshly harvested.

Erin A. March 19, 2014
This was, hands-down, the best colcannon I've ever had. Which might not be saying much, since I used to make colcannon in college by boiling all elements and mashing with a tiny bit of milk. But it is saying a lot. We made it for St. Paddy's, and enjoyed ourselves mightily. The kids, however, were not amused. Not sure why...but I hope they grow into it, since I plan on making it as a regular winter comfort dish. Thanks!

john March 17, 2014
My mum's from Dublin and always made this using kale not cabbage. Don't know why.

cucina D. February 28, 2014
I have never heard of this recipe and I am certainly going to make it soon. Love the combination of ingredients and I know my famiglia will love it too... thanks for sharing.

AntoniaJames February 27, 2014
Recipes that "read like they were written by a lawyer who dabbles in some cooking"? Ouch. ;o)

Fairmount_market February 27, 2014
Well clearly some lawyers can write incredibly thoughtful and patient recipes that evoke the whole essence and point of a dish. Keep them coming!

Summer O. February 27, 2014
We just made this last Friday, it was a hit. I had never had it before, we will certainly make it again.

fiveandspice February 27, 2014
I plead the 5th. :) I do love Elizabeth David, and wish that recipes could be written more in that style, and I think you're right with pretty much all the reasons you've listed for why they aren't anymore! The Old World Kitchen - particularly the bit about selecting foie gras - reminds me of this antique Norwegian cookbook my mom has in which the recipe for roast goose starts by giving instructions on selecting your goose, slitting its throat, and draining its blood, with the handy tip that the blood - mixed with a splash of vinegar - can be used to clean your kitchen floors. (????)

Kristen M. February 27, 2014
Emily, after tasting this at our photo shoot, I must say it is really the best colcannon I can imagine.
Author Comment