Piglet Community Pick: In the Charcuterie

Today: Dayna comes full circle with In the Charcuterie. 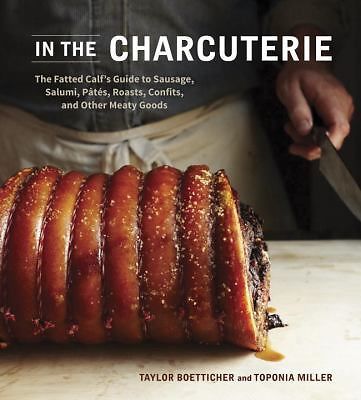 We should probably credit this whole 21st-century DIY boom with making the word "charcuterie" part of our culinary vocabulary. Most of us have used it to describe the assortments of pâtés, terrines, confits, and cured meats that often kick off our restaurant meals, but a charcuterie can also refer to the actual place that crafts these meaty treats. One such destination is The Fatted Calf, straight outta Napa, California. Taylor Boetticher and Toponia Miller are the husband-and-wife team behind it, and they’ve added to the small but growing number of charcuterie tutorials with In the Charcuterie, a beautifully realized cookbook that may be the most accessible of its kind thus far.

Unlike 2005’s hardcore Charcuterie, by Michael Ruhlman and Brian Polcyn, In the Charcuterie is packed with photographs of not only finished dishes, but also equipment, ingredients, and -- best of all -- instruction. A lack of space, funds, and a decent hacksaw prevented me from breaking down an entire pig, but boning a 4-pound chicken was a cinch thanks to step-by-step directions and accompanying photos.

Once that was finished, the chicken's carcass made its way into the book’s comprehensive broth recipe, which taught this seasoned soup-maker a thing or two about proper technique. The result then formed the basis for Creamy Semolina with Roasted Chicken Broth, Greens, and Pecorino, a gorgeously simple yet immensely satisfying winter dish.

More: Check out 5 Questions with the Fatted Calf for more DIY charcuterie inspiration.

The rest of the chicken had a date with the assertive Black Coffee and Bourbon Barbecue Sauce, a refreshingly straightforward recipe to anyone familiar with all the complex, spice-laden versions out there. Finally, the little organ bits became part of the Chopped Chicken Liver Crostini, whose earthy, salty, spicy, and smoky notes harmonized with an accompaniment of Loulou’s Garden Sweet-and-Savory Fruits, which home canners will find makes for a lovely edible gift.

As Sunday supper goes, you’d be hard-pressed to find a more homey dish than Pork Shoulder Pot Roast Stuffed with Garlic, Greens, and Walnuts, which tucks generous handfuls of easily found ingredients into a plump Boston butt that then takes a long, leisurely bath in red wine until it's fork-tender.

In the Charcuterie also includes a number of easy-to-follow recipes for potted meats like pâtés, rillettes, terrines, and gallantines -- including "the classic American pâté," meatloaf -- as well as detailed instruction on two of civilization's oldest culinary rituals: curing and smoking. You'll find formulas for various sausages and salami, plus dry-cured meats like bresaola, pancetta, and, of course, good, old-fashioned bacon. An enduring love of pork belly -- and, in keeping with the times, of DIY everything -- makes for a nonstop honeymoon with this practical, comprehensive, and accessible cookbook.

rochestercitynewspaper.com/rochester/ArticleArchives?author=2126693
i write about food and restaurants for rochester, ny's city newspaper, and during the day you can find me doing prep and desserts at an acclaimed little italian place called rocco.

aargersi March 4, 2014
Great review - I was frankly a bit scared of this book before I read it, but no more!!!