Chickweed and 4 Ways to Use It

Today: Chickweed's name implies that you'll find it growing where it's not wanted. This is probably true, but you might look upon it more kindly once you know how to work it into your meals. 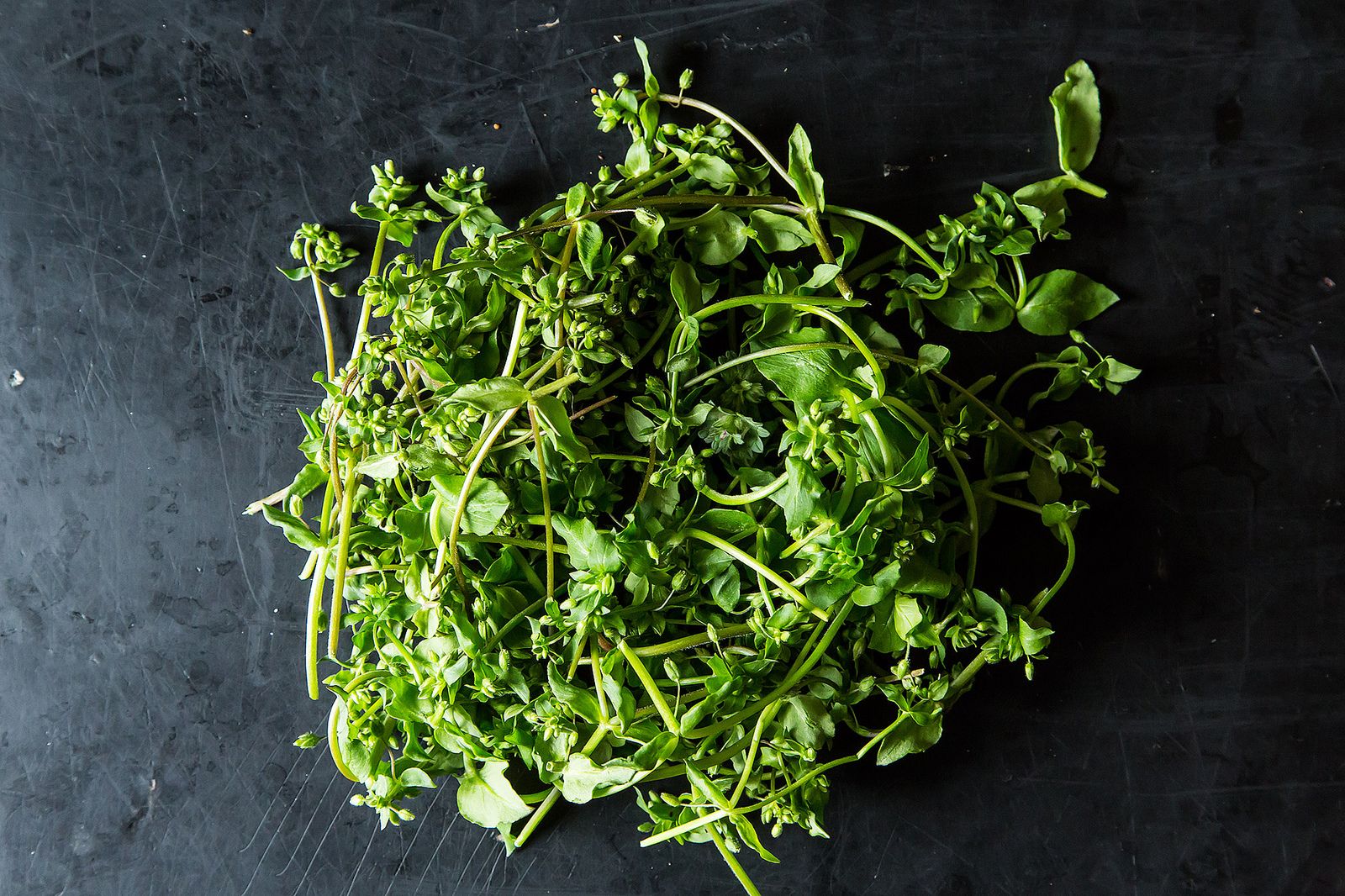 Unlike some confusingly named produce, chickweed’s name is pretty straightforward -- chickens can’t get enough of the stuff, and it's, well, a weed. It’s so prolific that it’s found all around the world (it might even be growing in your own backyard), and the stem (1, below), leaves (2, below), and flowers (3, below) are all edible.

The downside of growing like a weed is that it's considered a pest in some areas, but maybe that’s just because not enough people know how tasty it is. And, as a bonus, it functions as your own personal weather gauge: Chickweed’s leaves fold up before it rains. (They fold up at night too. But you probably don’t need help figuring out when that’s going to happen.)

More: For more control over what’s growing in your lawn, brush up on Garden Planning 101. 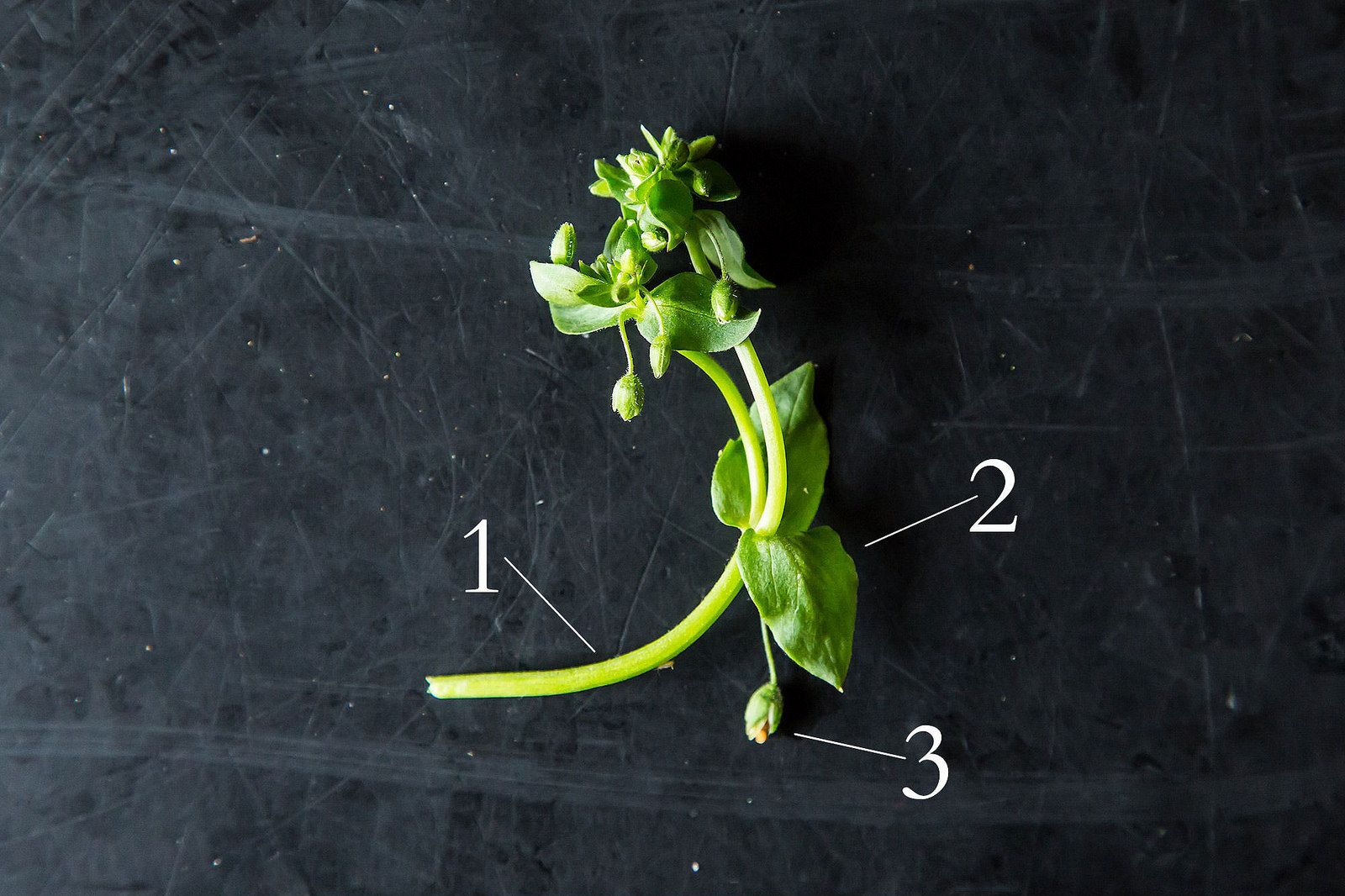 Once you think you’ve found chickweed, there are a couple things to look for that distinguish it from poisonous pretenders: chickweed has one line of hairs running up its stem, and it does not have milky sap. Be absolutely positively sure you know what you’re about to eat -- this is true when you are foraging for any ingredient! If you have even a shred of doubt, toss it and head to your local farmers market to track it down instead. Once you’ve procured it, here are 4 ideas to get you started in the kitchen.

Go Raw
Eaten straight up, chickweed's flavor is suggestive of sweet corn. Toss some in a salad, on a sandwich, or anywhere you'd use sprouts.

Cook 'Em Up
Chop up your chickweed, and then lightly sauté. You can eat this as is, or add it to egg dishes (like a frittata) or savory pancakes.

Get Saucy
Toss some in your sauce gribiche, or turn chickweed into gremolata or pesto -- then use it to make a week's worth of dinners.

Or Brothy
Add chickweed to soups or stews -- hold off until a few minutes before serving so it doesn’t overcook. Chickweed is also one of the ingredients in the seven-herb rice porridge eaten during the Japanese Festival of Seven Herbs (Nanakusa no sekku). No need to wait until next January, though -- rice and herbs are good together anytime of the year.

What’s your favorite way to use chickweed? Tell us in the comments!

DTM March 10, 2014
Chickweed Infused Oil is a great emollient, anti-itch herbal remedy. Heat the chickweed and oil in the slow cooker on lowest setting. Use about a cup of olive oil & 2 cups chopped chickweed. Be sure chickweed is submerged. Heat for about 2 hours. Strain and decant into a clean jar. Keep in fridge and use as needed on itchy skin/eczema. I also used to use this oil in my salads.

1natalplum March 9, 2014
It is so satisfying to harvest and eat weeds like chickweed and lambs quarters. You are controlling a pesky invader plus getting free produce! Thanks for the well written article.

petitbleu March 9, 2014
I love chickweed. It has such a mild, green flavor and is nice and tender, which is not true for all wild greens. However, I don't think I could ever bring myself to actually buy it--it grows everywhere!

placidplaid March 9, 2014
This was a great little article. Thank you.